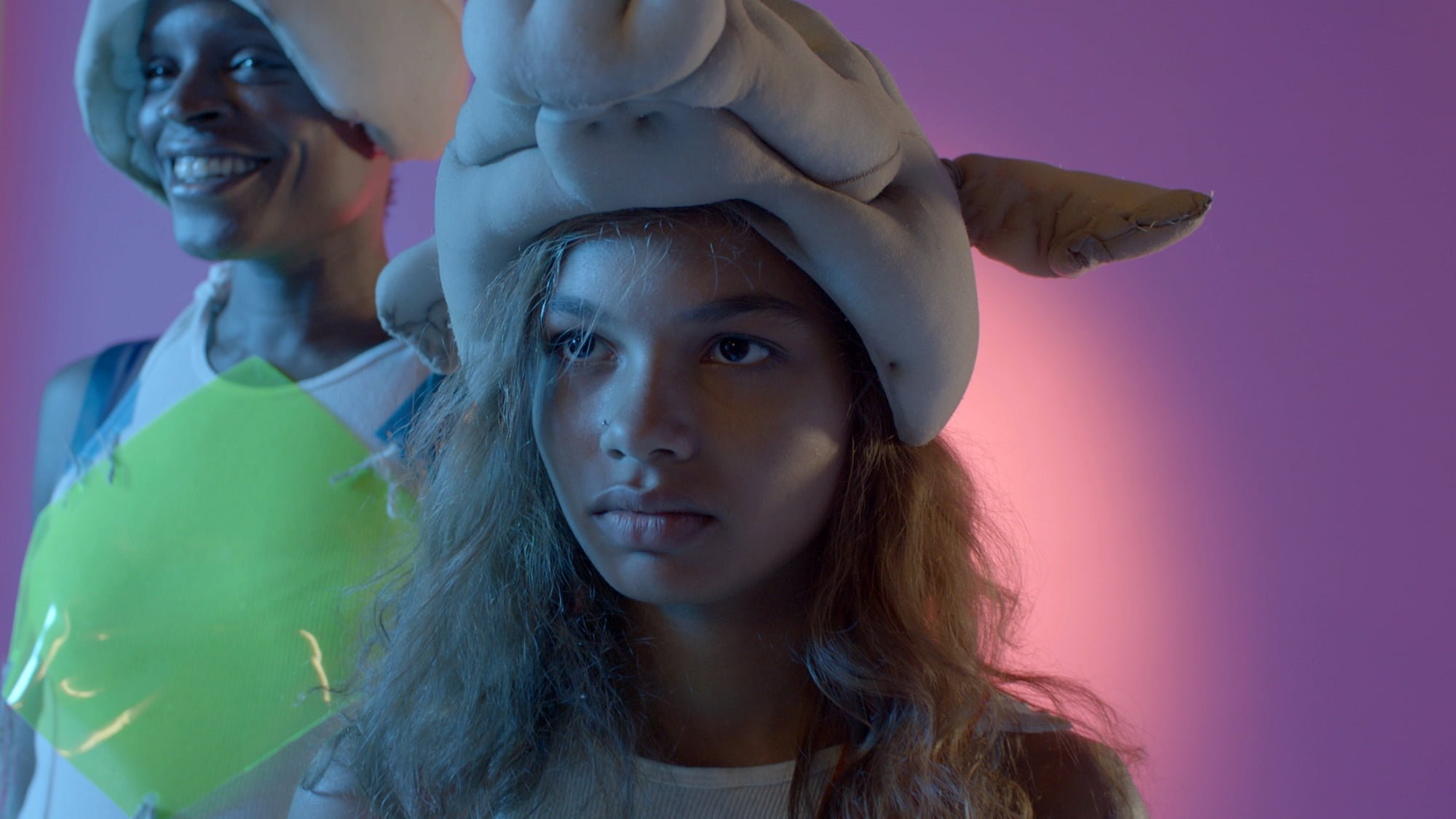 A harrowing, thoughtful, and borderline experimental look into the artistic mind, Madeline’s Madeline is unlike any film ever made. Try as one might to “sell” such a film by making comparisons to the past works of masterful auteurs or the obscurest of visual artists, Madeline’s Madeline defies any sort of categorization, making it one of the strangest and most alluring films to get even a minor theatrical release in quite some time (probably since Shane Carruth’s Upstream Color). It’s a work of honest, personal art. At one point, the closest pithy equation I could make in my head to describe Madeline’s Madeline was to half-assedly think that it was “the teen movie equivalent of the last twenty minutes of All That Jazz,” but even that does the work of director and co-writer Josephine Decker a massive disservice. It’s sure to be divisive, and I’m positive no two people who see Madeline’s Madeline will interpret Decker’s work the same exact way. Any film this equally electrifying, confounding, and slippery requires a lot of effort from the viewer to engage with it, but anyone willing to put in the work is in for one of the most emotionally driven surprises of the year.

Sixteen year old Madeline (Helena Howard) has a fractious relationship with her mother, Regina (Miranda July), and finds creative release through her work with an experimental physical theatre troupe. The bond that Madeline forms with her instructor, Evangeline (Molly Parker), is strong and simpatico, leading the troupe leader to create a show based almost entirely around the young woman’s personality. Initially, Madeline goes along with Evangeline’s ideas, but their relationship begins to sour once the teen starts taking her work more seriously and stringently than her teacher.

That’s probably the best I would ever be able to describe Madeline’s Madeline without getting into dense details about everything that happens within and outside Decker’s margins. Although Decker (Thou Wast Mild and Lovely, Butter on the Latch) is credited as a writer-director, her latest film moves and breathes like a truly collaborative effort, with credits for a story consultant, story editor, dramaturge, and even a nod to Howard’s improvisational techniques for offering considerable inspiration. Considering the film is about a band of performers coming together to make art from everyday inspiration, the approach is a valid and fruitful one for Decker. The result is an elusive story that feels like the dreams and nightmares of all three main characters crashing into one another and fighting for screen time.

At its heart, Madeline’s Madeline is a film about the relationship art and performance has to madness, mental illness, trauma, and personal maturation. To put it neatly, it’s a dense film that packs any number of delicate and boundary pushing subjects into just over ninety minutes. This doesn’t even cover subtext about pregnancy or how Madeline is black and her mother is white. It’s overwhelming and almost anarchistic from the jump, but after about twenty minutes, Decker and her cast settle into the natural peaks and valleys of the story. At its craziest and most reactive, Madeline’s Madeline is chock full of hallucinatory images, seemingly random montage, and unusual usage of narrative and visual focus. It takes some getting used to, but Decker is wise enough to make her film open with a true “take it or leave it” calling card. If one can get through the first act of Madeline’s Madeline, they’ll likely love everything that follows it. 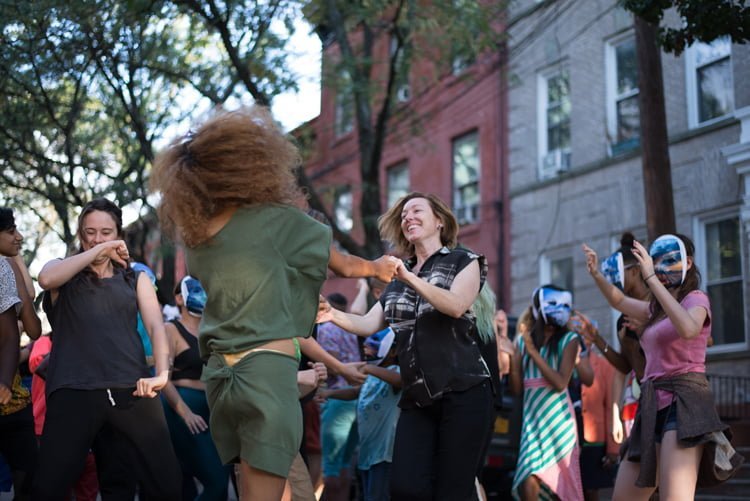 About all that’s perfectly clear about Madeline’s Madeline is that a young woman has grown estranged from her only remaining biological parent and has found solace, fulfillment, and encouragement in a new maternal figure. Everything else about the relationships and characters remain somewhat iffy. There’s plenty of talk about how Evangeline’s new work is about mental illness, something that the film explicitly says Madeline struggles with and suggests that Regina might suffer from, as well. The combination of mental illness and a personal drive to create might be what’s driving Madeline’s increasingly erratic and risky performance art – which at one point includes the young woman wearing a pig mask and grunting obscenely at passerby on the streets of New York City – but it could also be as simple as a girl venting all of her frustrations and fears for the sake of her art. As Madeline’s work becomes more daring and comes close to hitting some open nerves, Evangeline and Regina both feel increasingly off-put. Are they jealous, insecure, or feeling like they’re seeing an honest and truthful depiction of what Madeline thinks of them? Is the artist also the author of whatever work will end up being produced or is there a different relationship in play?

Madeline’s Madeline offers no easy answers and is often emotionally violent, and it’s a credit to Decker’s cast that this could work at all. While Parker does a fine job as the somewhat artistically suspect instructor, most of the heavy lifting falls to the exceptionally cast Howard and July, who form one of the most captivating mother-daughter pairings of the year. It’s astounding to think that Howard hasn’t had any screen credits before taking on such challenging work, but she exudes confidence and the rare ability to adapt to any sort of improvisational situation. The film relies on the instincts of the main character, and in turn Decker takes almost all of her cues from her star, making her just as much of a director as the film’s actual director (which I’m sure in a film this metatextual is entirely intentional).

Howard finds a perfect counterpoint in July, who is well versed in performance art and experimental cinema, but has never been better than she is here. It’s a strangely unshowy performance from July that just so happens to be planted in a full on freak-out of a film. If Madeline’s Madeline were a comedy, July would be deemed the “straight-woman,” but in actuality the performance she gives is uncommonly generous for a film geared towards possessive creative types. The most impressionable moments in Decker’s film most often occur between mother and daughter: Regina calling a pharmacy frantically to get her daughter’s prescription refilled, an amusingly award talk about safe sex, and a positively gutting sequence where Madeline caustically does an impression of her mother in front of the entire class. It’s never made clear if the viewer is supposed to feel sympathetic for the sacrifices Regina continually has to make, but July imbues the character with a strange kind of likability that’s hard to pin down.

I do wonder if there’s an audience for something as obtuse as Madeline’s Madeline outside of other creative types who can readily equate performance with madness. I’m not even sure that fans of avant-garde cinema will agree on the merits of Decker’s free-associative text. What I know for certain about Madeline’s Madeline is that I was never bored, I was constantly engaged, I look forward to discussing it with anyone who sees it, and that I witnessed a work of pure, undiluted emotion. The lines between performance, reality, and the dream world are constantly being shifted, erased, and redefined throughout Decker’s masterwork seemingly at will, and trying to keep up with everything is a trip in and of itself. This is the kind of film that scholars could write volumes about without tiring themselves out or rehashing the same ideas over and over again. The fact that this got made or released at all is a testament to the strength of the work. It only gets better the more I think about it. And if you’re not going to think about it, don’t bother going to see it.

Check out the trailer for Madeline’s Madeline: