Writer-director Andrew Bujalski’s intricately constructed character study Support the Girls boasts a story that could have provided ample fodder for a low-brow, crowd pleasing comedy. Instead, it’s a refreshing and remarkably unflinching look at everyday people stuck in thankless, semi-degrading service industry jobs trying to balance external responsibilities alongside tasks they don’t get paid nearly enough to perform. Instead of going broad, Bukalski sticks to the detail oriented plotting and construction of his previous films, resulting in some of the director’s best and most accessible work to date.

Support the Girls spends a full day riding shotgun with Lisa, played by Regina Hall, a put-upon, quickly unravelling manager at Double Whammies, a Texas roadhouse-slash-“family restaurant” that serves up sanitized T&A along with its burgers, wings, and fries. The day starts off with Lisa crying in the parking lot, and it only gets worse from there. Someone tried breaking in to the restaurant overnight and has somehow gotten stuck in the air conditioning duct. The incident has left the sports bar without cable on the day of a huge MMA fight. She’s shorthanded, so when a new crop of waitresses come in for interviews, she has to more or less put them to work immediately without much training. At home, her marriage is falling apart thanks to her husband’s depression, and she’s also currently trying to shelter a female co-worker who just got released on bail following a domestic incident. After bailing her friend out of jail, Lisa mounts a last second, unauthorized, car wash fundraiser in the restaurant parking lot in a bid to recoup her losses and hire a lawyer, something that doesn’t go over well with her aloof and irritable boss (James Le Gros). Lisa’s troubles never ease up throughout the day, and her perpetual level of stress will lead to a formative point, not only for the manager, but the rest of the restaurant’s loyal staff, as well.

Bujalski (Computer Chess, Mutual Appreciation) has quietly become one of the greatest wits in independent American cinema. Capable of creating emotionally resonating comedies out of everyday tragedies and set-backs, Bujalski can make people laugh – both quietly and aloud – by never actually crafting obvious punchlines and set pieces. Any humour that arises from a given situation naturally is more than enough for Bujalski. The approach is dry and restrained, but also immersive and captivating.

Bujalski has an eye and ear for fine detail, but he never strains to employ his talents in flashy ways, preferring a relaxed, almost verite sort of approach. Not everything about Support the Girls is designed to be side splittingly funny or rousing, but that’s precisely what makes one appreciate Bujalski’s direction. It’s a film that constantly wants to remain accessible, relatable, and believable, even when the characters are tasked with delivering testosterone soaked fantasies to their customers. Other films have dabbled in such depictions of the service industry, but Bujalski is the first to effectively balance good humour with the soul crushing depression that often goes hand in hand with working at such an establishment.

Support the Girls escalates masterfully and logically as side characters compound and enhance Lisa’s existential angst and frustration. Lisa has two right-hand-ladies – realistically upbeat veteran server Maci (Haley Lu Richardson) and no-bullshit lead waitress Danyelle (Shayna McHayle) – who do their best to hold things together at Double Whammies while the manager is called away to deal with external stressors. Line cook Arturo (Steve Zapato) is on the verge of getting fired. Newbie Jennelle (Dylan Gelula) wants to make the most of her marketing major, but most of her ideas are likely to get the restaurant into trouble. A kind-hearted lesbian customer (Lea DeLaria) wants to help the girls any way she can, but often steps on toes or distracts in the process. The owner holds everyone around him with thinly veiled contempt that suggests he mentally and emotionally checked out of his business a long time ago. Some customers are openly abusive, some come with a basic level of male ignorance, and others are so focused on food and beers that they have no time for the servers’ tawdry PG-13 theatrics. 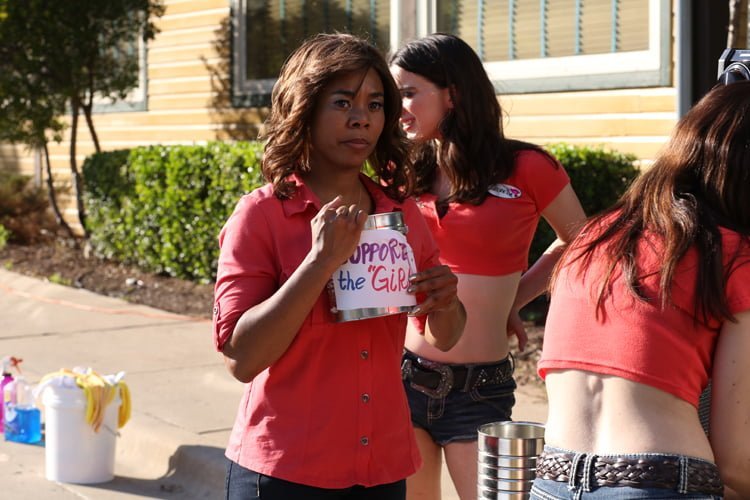 These characters and plenty of customers who drift in and out of the restaurant doors intersect with each other like expertly cut pieces of a dysfunctional puzzle. Unlike many workplace comedies, the women in Support the Girls mostly like and respect each other. They’re not in competition, and they’re quick to address any problems between them. They’re in the same crappy job together. While some of them would scoff at the clichéd notion of them being somewhat of a family unit, they’re certainly friends or close colleagues. The relationships between these women, their jobs, their customers, and their outside lives aren’t divorced from one another.

Everything that happens in Support the Girls is there for a specific reason, with Bujalski expertly constructing a work of art built from working class malaise and fears. There’s plenty to read into here about worker’s rights, the selling of the female form for entertainment, and people of colour in the workplace, but Bujalski lets viewers figure all of that out for themselves through fully realized, lovingly drawn characters in believable situations. It’s never gauche enough to stop everything to make a speech or whittle the material down to a fine point. Bujalski knows that everyday people will understand these characters immediately, and never speaks down to the viewer or their on screen surrogates.

The cast universally acclimates itself to Bujalski’s uniquely stripped down rhythms, with the continually reliable Richardson and musician turned actor McHayle emerging as supporting stand-out. Meanwhile, in the lead role, Hall is a revelation worthy of serious Oscar talk. Lisa is a strong, sensible, intelligent woman who’s the smartest person in the room at all times, but she’s been pushed to her emotional breaking point. She hates the toll that her job and crumbling personal life have been taking on her, and watching Hall depict the character’s desire to do something about it is some of the most rousing comedy and drama in any film this year. One is never sure if Lisa takes her job too seriously or if she only stays there out of a love for the people she works with. It’s a strongly written character, which gives Hall better material than she’s ever been given, leading to what could be a career defining performance. She’s called upon to do almost all of the heavy emotional lifting in Support the Girls (save for a climactic moment where McHayle’s increasingly jaded manager-in-training stops giving any semblance of a shit about her job), and it results in one of the year’s most technically accomplished, big-hearted, and subtle performances.

It’s fascinating to behold a film with a decidedly lowbrow premise mined for truthful human emotions and cathartic revelations instead of gross-out gags and bawdy exhibitionism. Bujalski’s comedic restraint might confound some viewers who expect something broader from a film with this particular logline and a double entendre for a title, but it’s all in service of creating something impactful and unforgettable. A great comedy can make viewers forget about the outside world for ninety minutes. Support the Girls is a comedy that wants to remind the viewer of the outside world and all of its sometimes darkly humorous pitfalls for ninety minutes. It’s not quotable or risqué, nor does it ever need to be. It seems basic, but Bujalski’s latest is anything but simplistic. It’s as complicated, vexing, and emotionally gutting as real life. It’s just as funny, too, if you know how to find comedy in dark places.

Check out the trailer for Support the Girls: