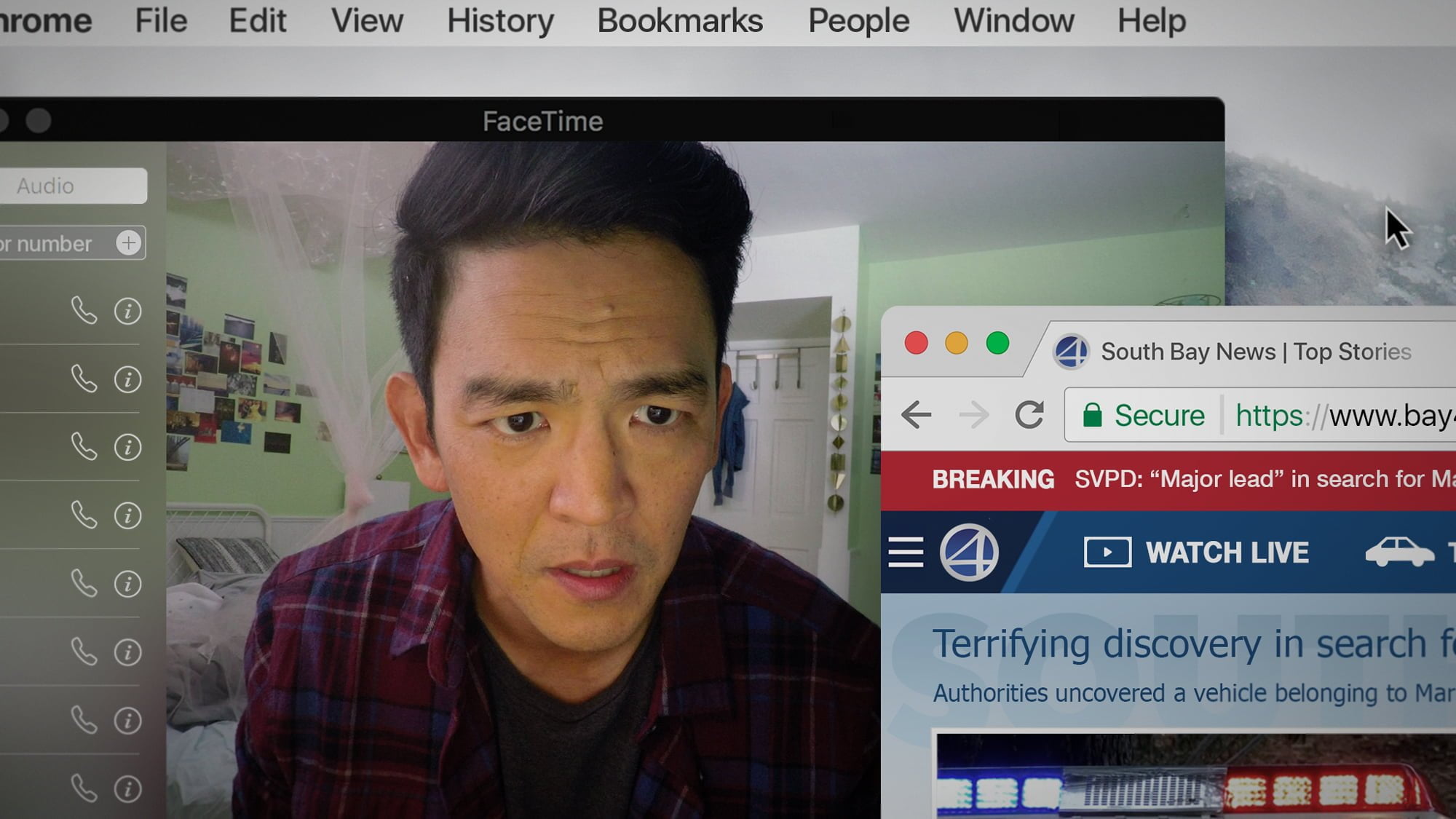 The missing persons thriller Searching uses a suddenly trendy storytelling gimmick to deliver a mostly clever and suspenseful yarn about one man’s desperate search for his daughter and the online secrets he uncovers in the process. Unfolding almost entirely on computer desktops and cell phones, Searching is the latest attempt in an increasing number of films to mine our obsession with screen time for maximum paranoia and dread. While this isn’t the best example of a film from this booming genre, Searching does manage to be three quarters of a great movie with a disappointing final quarter tacked on lazily at the end.

Widowed single father David Kim (John Cho) finds himself growing vexed with his increasingly flighty, rebellious, and seemingly lazy teenage daughter, Margot (Michelle La). It’s nothing that would be unrecognizable to most parents: a refusal to do chores, spending lots of time with friends and not at home, a slight sense that the daughter might be embarrassed by her square, doting father. After one such night out with friends, Margot doesn’t return home. Chalking it up to a fight they had the night before, David does his best to give the situation some space. When Margot still doesn’t return home or answer calls and texts, David fears the unthinkable might have happened, and he reports her disappearance to the police. Assigned detective Rosemary Vick (Debra Messing) assures David that she’s handled thousands of missing persons cases before, and that she’ll do all she can to ensure Margot’s safety. Riddled with grief and desperate for immediate answers, David starts snooping around on Margot’s laptop for contacts that might know her whereabouts or clues as to what might have happened. Not long into his investigation, David learns some dark truths about his daughter’s secret life, coming to the crushing realization that his kid isn’t the young woman that he thought she was.

The first feature from short filmmaker and former Google employee Aneesh Chaganty, Searching, like the recent Unfriended films and the Canadian produced short Noah, uses modern digital age fears and filmmaking craft to update a more traditionally established narrative. Searching even shares a producer with this summer’s Unfriended: Dark Web: Kazakh filmmaker Timur Bekmambetov (Wanted, last year’s Ben-Hur remake), who recently started a production company that will likely only make movies made in a similar digital style (including one that he directed himself, the journalism world thriller Profile, which is due out in March). The jury’s still out on this being a wise business plan. It’s a good way to make a sprawling thriller in a minimal amount of time and on the cheap, and there are certainly stories that could mine a lot of suspense and intelligence from unfolding entirely on a computer desktop, but even with all of its many positives, Searching (like Unfriended: Dark Web) shows that stories often have to strain to fit the gimmick.

Writer-director Chaganty has designed Searching to feature a major rug pulling swerve every ten minutes or so. It sounds somewhat excessive in theory, but Chaganty makes David Kim’s increasingly desperate dive down a social media rabbit hole more dramatic. There isn’t a lot of filler in the nimbly paced Searching, since David never stops fighting for answers, even at his most exhausted. There’s plenty of relevant material in here about the internet’s sometimes overwhelming lack of empathy, how teens are becoming desensitized to tragedy, and how quickly random strangers are to cast guilt upon David’s harried widower (including a few absolutely gutting moments where the father reads comments sections on stories and videos related to the case). Things grow increasingly dark and desperate, but Chaganty almost never takes the story into familiar, predictable territory. The story’s game of digital obfuscation makes David’s increasingly erratic and sleep deprived behaviour all the more sympathetic and poignant. 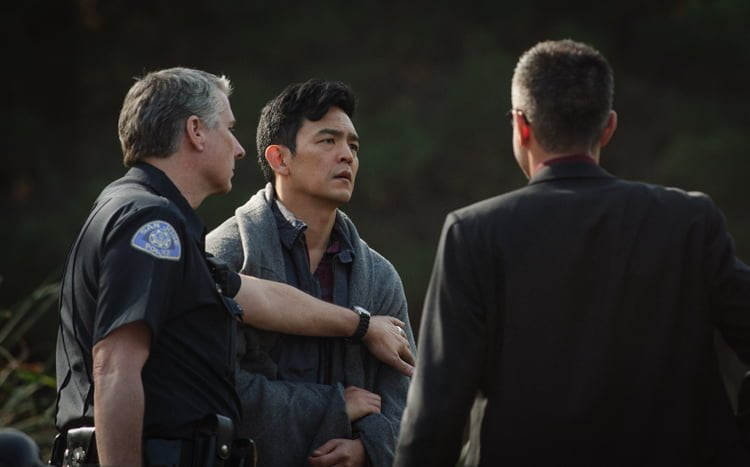 Combined with an exceptional and appropriately lengthy opening prologue that creates a digital snapshot of the Kim family in happier times, Searching finds most of its moral and dramatic strength in Cho’s carefully nuanced performance. It’s up to Cho entirely to convey the proper emotional beats and shocked responses to Chaganty’s twists and turns. Although the viewer rarely sees David outside of a computer window, the performance given by Cho looks and feels physically and mentally depleting. As David grows more frustrated and unhinged, making worse decisions along the way that could jeopardize things more than they help, Cho’s weary eyes and trembling voice sell the gravity of the situation expertly. It can’t be an easy performance to achieve, considering that for over half the film, Davis is left to his own devices, only sparingly interacting with family members, the police, and Margot’s deceptively small circle of friends sparingly. In Cho, Chaganty has found a perfect collaborator.

It’s a testament to Chaganty’s sense of style, pacing, and storytelling that the increasingly twisty Searching never feels silly or contrived. Most of the diversions and detours in the story are nicely integrated, and Chaganty finds logical inroads to these revelations within the film’s constricting stylistic framework. It all works surprisingly well until the conclusion, where the limitations of such a storytelling gimmick become woefully apparent.

Setting aside for a moment that the big reveal at the end of Searching is the most predictable twist the story comes up with, it’s not so much what’s being said by the film’s climax, but rather how it’s choosing to explain itself. The last fifteen minutes of Searching make sense in theory, but are botched in execution. Instead of finding new ways to incorporate the screens-within-screens stunt to wrap things up nicely, Searching proves that the gimmick can only stretch so far within such a story without snapping. The film becomes needlessly talky, explaining everything in painstaking detail instead of simply showing things as they would have unfolded naturally. Worse still, it becomes apparent that Chaganty hasn’t established a logical or discernible timeline for all of these events to unfold, leading to a conclusion that smacks of test audience tinkering and reshoots. I’m sure that the ending chosen for Searching is the right one in practice, but there had to be a better way of pulling it off.

If Searching suddenly broke with its established style for the film’s conclusion, it would be forgivable. Instead, Chaganty can’t come up with logical explanations as to how the viewer could be watching things that most cameras in the world wouldn’t have access to. It overcomplicates what should have been a pretty cut-and-dry conclusion unnecessarily, and takes a perfectly usable twist and turns it into something silly that strains credibility, not in terms of substance, but in terms of style. By sticking to his chosen form of storytelling, Chaganty ends up shooting himself in the foot and laying bare the most basic and treacherous limitations of this filmmaking style. Chaganty’s film outgrows the one thing that made it special and irreverent, with the gimmick suddenly acting like a millstone dragging the story down in rapid fashion.

It’s a shame that Searching loses all of its momentum at the most inopportune time. Chaganty’s work here could have proven to be a high water mark for this budding sub-genre of thrillers. It’s still a nicely entertaining and relatively intelligent bit of cinematic paranoia, but it almost crashes spectacularly upon landing. Outside of the wonky ending, Searching keeps its celebration and demonizing of internet culture in a nice balance. I’m not certain if this sub-genre can sustain itself much longer, but I’m interested to see what the next crop of filmmakers looking to attempt something similar come up with. Searching is a great film for anyone wanting to make something similar to watch and learn from its numerous successes and its handful of regrettable mistakes.

Searching is now playing in select U.S. cities. It expands and opens in theatres across Canada on Friday, August 31, 2018.

Check out the trailer for Searching: