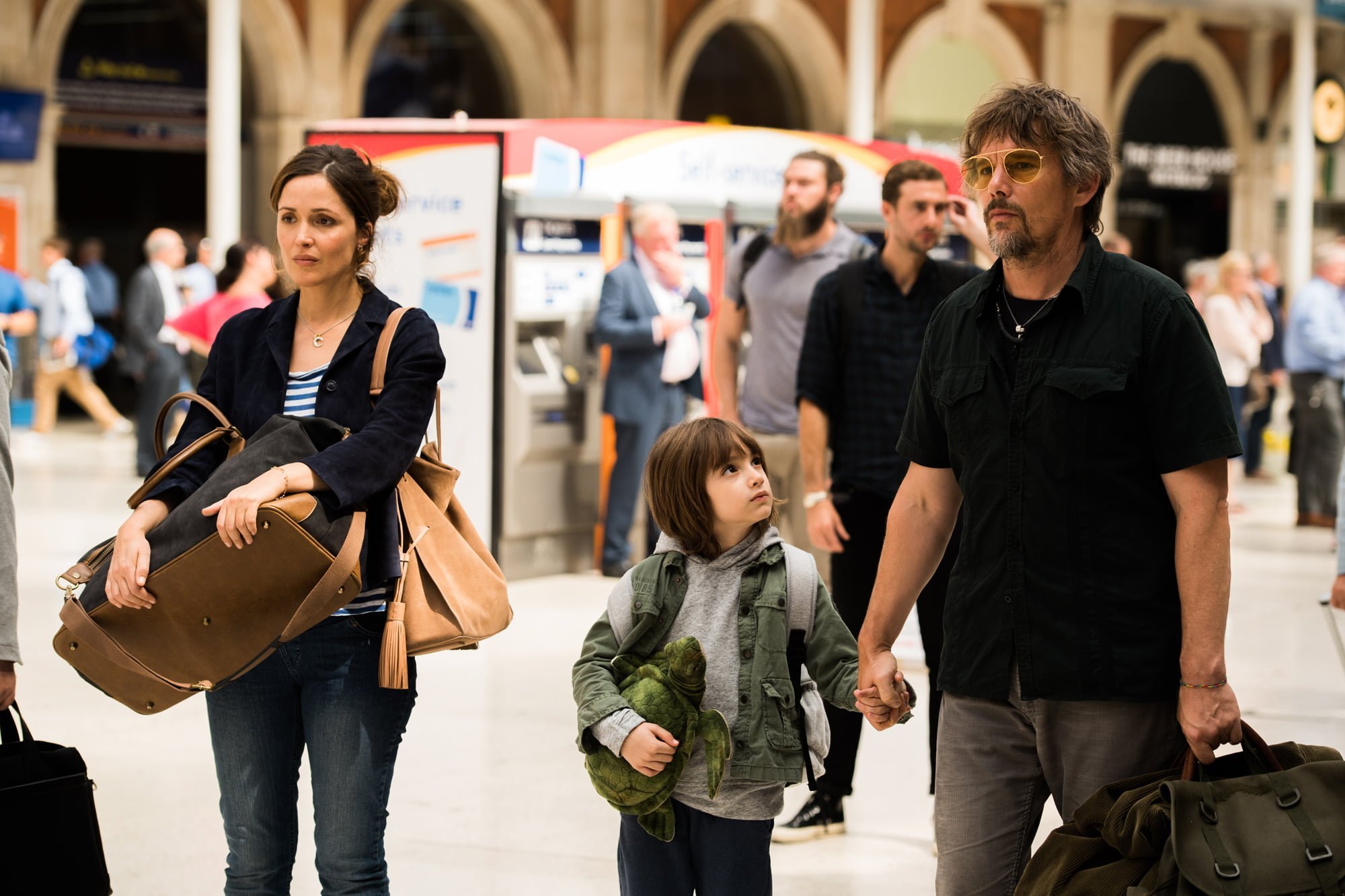 Juliet, Naked, the latest big screen adaptation of a novel from prolific British author Nick Hornby, is one of those character studies that works better on the page than it does blown up to a grander scale. Although it boasts a pair of likable leading performances from chronically underrated talents Rose Byrne and Ethan Hawke – two of the best actors of this generation – Juliet, Naked boasts a scattershot sense of focus that bogs down what should have been an otherwise commendable story of unlikely friendship and budding romance. There’s too much going on in Juliet, Naked to properly contain in the film’s confined narrative space. Most of it is pretty good, but not as great as it could have been with a bit more pruning and narrative assuredness.

Annie (Byrne) works as a curator for a community museum in a coastal British town, whose relationship to her film theory professor husband, Duncan (Chris O’Dowd), has been on the rocks for quite some time. Full of himself and resolute in his desire to never have kids, Duncan is also unhealthily obsessed with the music of singer-songwriter Tucker Crowe (Hawke), an alt-rock troubadour who released only a single seminal album in the 90s before becoming the reclusive J.D. Salinger of sad indie dudes everywhere. Duncan spends most of his free time running a fan site, deconstructing every note and word of Crowe’s minimal output, and theorizing about where his musical hero has been hiding all these years. It leaves Annie understandably frustrated and lonely. When a package arrives containing a rare, acoustic version of Crowe’s only album, Annie listens to it before Duncan can get his hands on it. Duncan, already annoyed by Annie’s betrayal of all that he holds culturally dear, is even more vexed by Annie’s belief that the album is a piece of garbage, something she cheekily posts on the message board of her husband’s website.

The unexpected occurs when Annie gets a private email from the elusive rocker, who wholeheartedly agrees that “Juliet, Naked” is crap. After confirming that Crowe is who he says he is, Annie begins a secret correspondence and friendship with her husband’s idol. The two bond over feelings that they’ve squandered the last two decades of their lives by remaining stagnant, although Crowe’s life – which includes several children from different parents and a handful of ex-wives and partners – has been far messier. They grow closer once Tucker makes a trip to the U.K. with his youngest son (Azhy Robertson) to watch one of his older, teenage kids (Ayoola Smart) give birth to his first grandchild. Tucker’s messy personal life and Annie’s crumbling marriage make them fast friends, but the chaos that surrounds them threatens to derail them from pursuing their relationship into more romantic territory.

There’s a lot of narrative ground to cover in Juliet, Naked, directed by television and music video veteran Jesse Peretz (Our Idiot Brother, The Ex), and the condensed take on Hornby’s character driven work struggles mightily to contain it all. While Annie and Tucker are given more or less equal footing in the story, neither half gets elevated into something great or original. The romantic subplot thankfully never overtakes the personal torments of the characters, but it still plays out like a gender swapped riff on Notting Hill. The individual narratives of the three main characters all feel like they’ve been constructed not from a single Hornby work, but from a greatest-hits album of the author’s favourite tropes. Tucker is a reformed cad learning to be a better person. Duncan is a hopeless, pop-culture obsessed man-child with increasingly fewer moments of self-awareness and clarity. Annie is a restless soul in desperate need of external stimuli to distract from her increasingly pedantic life. On the page, Hornby makes these characters into vibrant, complex characters. Peretz’s film turns them into a bunch of immediately recognizable, but lovingly drawn clichés that just so happen to orbit around one another.

There’s definitely a pronounced amount of care that has gone into crafting the characters for Juliet, Naked, making it a hard film to outright dislike. Annie is sympathetic, Tucker is magnetic and boasts easily explained flaws, and Duncan is properly detestable (something O’Dowd leans into a bit too heavily, often making one cringe every time he resurfaces in the story). While Peretz and his team of three screenwriters do what they can to flesh the characters out with a degree of dramatic and comedic nuance, Juliet, Naked remains too rushed to make much of an impact. 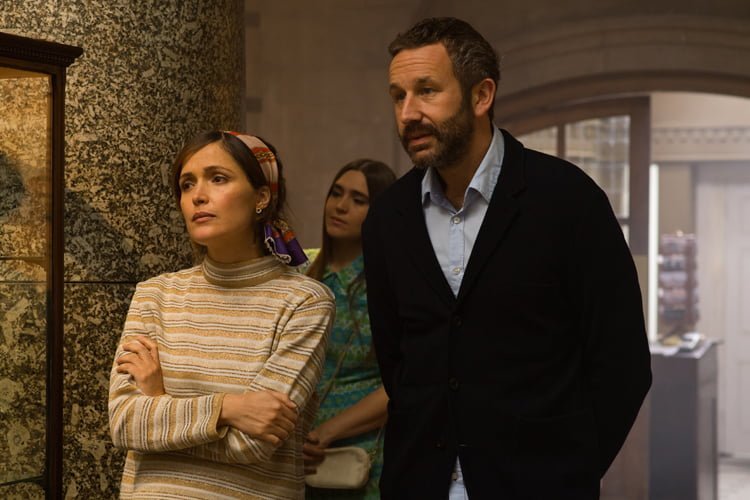 Tucker’s life is a chaotic whirlwind, and Peretz can work around that character’s storyline quite nicely, but Annie’s story requires a more delicate touch than the director and writers can provide. Tucker has a lot of things that he needs to atone for in life, but when the story is set up from the outset as Annie’s narrative, the asides involving the musician’s redemption tour feel like they’re shortchanging the true lead of the film and her perspective. Juliet, Naked has the energy to keep up with Tucker’s lifestyle, but little of the emotional intelligence needed to convey Annie’s conflicted feelings towards her current lot in life.

Despite getting curiously shifted into the background at times as the film’s lead, Byrne mines the character for plenty of subtle grace notes. While she’s able to show off her frequently utilized capabilities as a quick wit, Juliet, Naked also displays her talent for understatement. A purposefully awkward dinner table sequence where Duncan gets into an argument with Tucker about the meaning and merits of the musician’s greatest achievement might belong predominantly to O’Dowd and Hawke, but pay close attention to how Byrne is reacting to everything being said without saying much at all. A hallmark of a great performance is realizing when an actor is capable of saying volumes with simple glances, and Peretz wisely keeps cutting back to Byrne amid all the shouting. It might not be the best or most originally written character in a Hornby adaptation, but Byrne’s immense talents make a lasting impression.

Meanwhile, Hawke reaffirms his status as the go-to guy for this sort of sensitive alpha male character. Coming down somewhere between his egotistical swaggering performance in Reality Bites and the kind-hearted screw up father he played in Richard Linklater’s Boyhood, Hawke knows this type of character well. At times, his performance here can feel a bit like watching someone using their muscle memory to deliver work that feels effortless. That ease and comfort is precisely what makes Hawke a perfect counterpoint to Byrne’s restrained, but tightly wound performance. Both performances are lived in and fully realized, going together as great as chocolate and peanut butter, even if the roles are penned as simply as those ingredients.

Juliet, Naked gets the most it can out of its leads, but it’s still a film that needs more room to breathe and grow if it wants to be truly successful. The characters are sketched out decently, but the story glosses over any real depth. The character details add some richness for the performers to work with, but they’re treated as bland, mechanical plot points and not insight into the inner lives of the people wrestling with them. Peretz becomes so focused on hitting all of the necessary beats, that his work becomes efficient to a fault. Juliet, Naked is always in danger of becoming colourless and bland. Thankfully, the cast is able to save the film every step of the way.

Juliet, Naked opens in theatres across Canada on Friday, August 31, 2018.

Check out the trailer for Juliet, Naked: