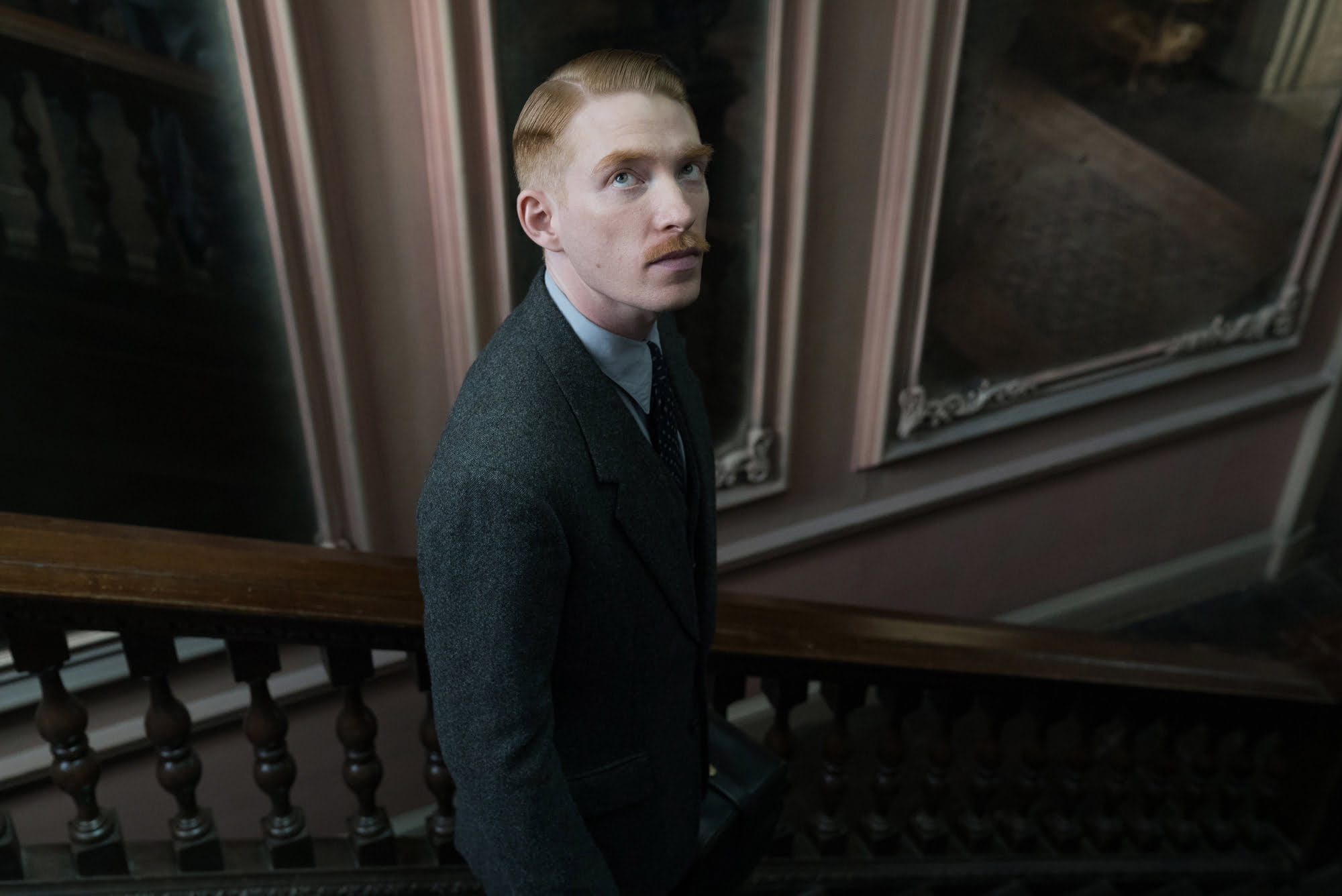 A staggeringly boring misfire, the period piece thriller The Little Stranger is so lifeless and frustratingly stiff that it could make the Masterpiece Theatre crowd both impatient and sleepy at the same time. It’s the kind of spectacularly mounted dud that could only be made by talented people who have overshot their own sets of talents. It’s the latest film from Oscar nominated and usually reliable Irish director Lenny Abrahamson (Room, Frank, What Richard Did) and up and coming screenwriter Lucinda Coxon (The Danish Girl), but really something this leadenly self-serious could have probably been made with artificial intelligence and turned out the same way. It’s a chiller so rigid, cold, distant, and uncomfortable that it will make viewers feel like they’re wearing a frilly dress shirt that’s been starched in liquid nitrogen.

Domhnall Gleeson stars as Dr. Faraday, a physician who gets called upon to treat an ailing maid at a rural English estate where his mother once worked as a servant. After treating the young woman (who wasn’t so much sick as she was desperate to get out of her thankless and increasingly difficult job), Faraday is repeatedly called back to advise the family on any number of additional ailments and provide comfort. The Ayres family has owned Hundred’s Hall for generations, but after a tragedy claimed the life of one of the family’s youngest, they’ve fallen into financial collapse, and the house sits in a constant state of decay and disarray. Mother Ayres (Charlotte Rampling) maintains a stiff upper lip and carries on like nothing is terribly wrong. Son Roderick (Will Poulter) returned from the World War II disfigured, heavily burned, and limping both physically and emotionally. Daughter Caroline (Ruth Wilson) does her best to keep the family together, but she increasingly relies on Faraday to help her do so. Faraday finds himself attracted to Caroline, but circumstance and mysteriously mounting tragedies and setbacks threaten to drive them further apart. Roderick has long insisted that a malevolent spirit haunts the grounds and walls of Hundred’s Hall, and evidence begins to pile up to suggest that his madness could be justified.

Adapted by Coxon from a novel by Sarah Walters, The Little Stranger looks and broods like a low-key period thriller, but is written like a plodding, uninteresting, wafer thin domestic drama that’s told from the perspective of a lifeless, unlikable, and bland third-party protagonist. It’s the kind of film that demands with every frame to be taken as seriously as possible, forcing rigidity onto a story that needs a more relaxed touch to allow for thoughtfulness and character development. It’s bad enough that The Little Stranger holds almost no entertainment value whatsoever, but it also doesn’t give the audience anything worth chewing on or thinking about while it’s unfolding. It’s an inert piece of work that staunchly refuses to engage with the viewer; a bunch of scenes strung across a timeline in a logical, but lacklustre fashion.

The only performers who rise above the material somewhat are Poulter and Rampling, with the former disappearing very early in the film and only returning for a brief moment later, and the latter only getting one scene that’s worthy of her talents. Abrahamson, who’s more focused on the drab production design elements (which aren’t even that interesting or photogenic) and a sense of monotonous pacing, instead sticks the viewer with Gleeson and Wilson, two capable performers delivering their career worst work. 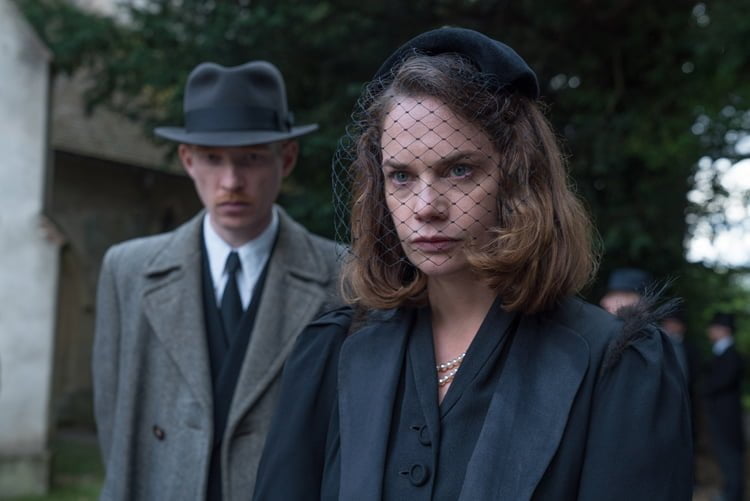 Wilson fares the better of the two, but mostly because her character has a slightly more emotional arc of the two leading roles. Her descent into paranoia and withdrawal from the outside world could have been mined for maximum emotional catharsis, but instead gets framed as a slight inconvenience instead of life altering circumstance. Abrahamson never allows Wilson to attempt anything remotely dramatic or vibrant, maintaining a belief that a film about an aristocratic family’s fall from grace should remain dignified and tightly wound at all times. Downton Abbey wasn’t this square and colourless, and Abrahamson and Noxon have handcuffed Wilson to a thankless part and doomed her to a wooden performance.

But if Noxon is bad, Gleeson is downright unwatchable, delivering a performance so stoic that one could replace him with a marble statue on a handtruck and no one would be able to tell the difference. Faraday never smiles, rarely raises his voice, turns up his nose more than his wealthier counterparts, and carries on with a blank expression at all times. It’s not the first time in recent memory that Gleeson has dialed his abilities down to near comatose levels (see last year’s dreadful Goodbye Christopher Robin for another example), but it’s the first time when he’s been asked to play such a role when the character is on screen for nearly every scene and shot of the film. Abrahamson has essentially built his film around a plank of pine and not a flesh and blood human being, and it’s more the director’s fault for not telling the actor to loosen up a bit. It’s a performance that seems to have been given little to no direction whatsoever.

The first eighty minutes of The Little Stranger feels approximately ten hours long, with the supernatural leaning elements only kicking on once the movie is two-thirds completed. Even the spooky goosing of the audience that arrives far too late to make an impression is restrained and disinteresting to the point of becoming vaporous. The material comes with a certain degree of noticeable subtext about post-war anxieties, the insular nature of wealth, and the dangers of social climbing, but none that Abrahamson wants to engage with directly. The Little Stranger is a film where things happen simply because there wouldn’t be a movie without them. In this case, The Little Stranger would be better off not existing at all. By the time the film’s equally ambiguous and logically nonsensical conclusion rolls around, people will remember that they saw a movie, but they won’t remember a thing beyond that. This is the cinematic equivalent of watching a test pattern, but at least test patterns are colourful.

The Little Stranger opens in theatres everywhere on Friday, August 31, 2018.

Check out the trailer for The Little Stranger: