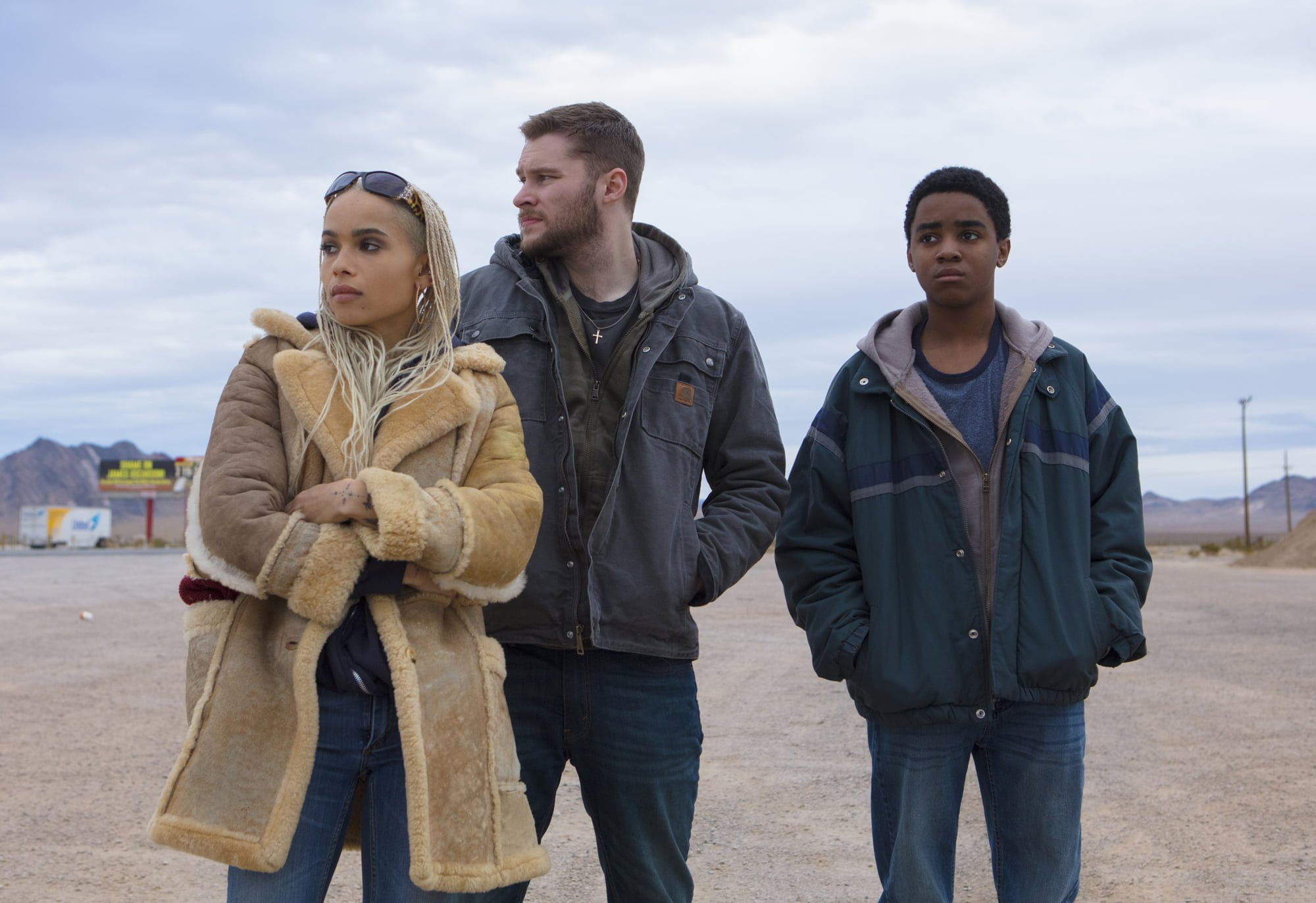 A wildly uneven mash-up of high concept sci-fi and clichéd family-in-crisis tropes, Jonathan and Josh Baker’s Kin starts off with an interesting enough premise and a stacked cast of old pros and newcomers trying their hardest before quickly setting into a boring groove and finally switching over into braindead idiocy in the final act. Despite the story being built around a young teenager and the enormous intergalactic shotgun that he found, Kin is a regrettably boring experience. It’s dull and plodding for the most part (two words no one ever wants associated with genre work), but I was always wondering where the Bakers would head with the material next. As the film wore on, that curiosity began to feel like professional obligation rather than a genuine sense of wonderment or emotional investment.

Fourteen year old Elijah Solinski (newcomer Myles Truitt) lives with his adoptive construction worker father (Dennis Quiad) in Detroit. Since the death of his mother, Eli has been lashing out at school and home. His life grows more fraught when his irresponsible older brother, Jimmy (Jack Reynor), returns home from a six year prison stint for robbery. Eli dabbles in stolen goods, as well, frequenting abandoned buildings and construction sites to rip off aluminum and copper wiring for some extra cash. On one such occasion inside an abandoned warehouse, Eli stumbles upon a bizarre looking murder scene. A bunch of people dressed from head to toe in armour appear to have blown each other away with enormous, rectangular, multi-purpose guns. Eli snatches one of the weapons and brings it home, thinking it’s one of the coolest things he’s ever seen. Meanwhile, Jimmy finds himself in hot water, needing to pay back a sixty thousand dollar loan for prison protection to local white trash crime boss Taylor Balik (James Franco). When Taylor starts threatening Jimmy’s family, the older brother takes Eli on an impromptu road trip from Michigan to Lake Tahoe, with the bad guys and the weapon’s inter-dimensional owners all in hot pursuit.

While Kin remains a failure on the whole, there’s a lot to like in the Bakers’ feature length adaptation of their own short film, Bag Man. It certainly puts its best foot forward from the outset. The family drama aspects of Kin throw some refreshing new wrinkles into a bag of old clichés. Making the Solinski family a mixed race unit isn’t dwelled upon too strenuously, but it does add a lot of subtle beats to otherwise stock character traits (the hardworking pops, the troubled teen, the family screw up). Initially, Kin feels like the kind of movie that doesn’t need flashy action sequences and high powered weaponry to feel important or different. That’s a feeling that doesn’t last, but at least Kin is the type of film that turns sour gradually instead of stumbling out of the gate.

Truitt makes a huge impression here, delivering a soulful and subtle portrait of a likable young man that society has given up on. Even when the story swerves towards the ridiculous and implausible, Truitt provides to be an emotionally grounding force. While this is the first leading role for the budding actor, Truitt displays the biggest trademark of a bonafide star: he can make almost any material that’s given to him work. No matter how silly or frustrating Kin becomes, Truitt remains magnetic and watchable. In some ways, it’s the best star vehicle possible. He’s the best thing in the movie, and there’s little else to distract from his performance.

He also has a great amount of chemistry with his co-stars, holding his own against Quaid (who looks absolutely terrible these days) and building a solid relationship with Reynor. Unfortunately, the characters are as uneven as the rest of the Bakers’ work, but the shortcomings in the performances aren’t always the fault of the actors. Franco’s supporting turn as the heavy is a phoned in delivery of soft-spoken psychopath clichés, with a few of the actor’s trademark eccentricities thrown in for good measure (including a ludicrous, indulgent speech delivered at a family funeral that should have been cut entirely from the film). Zoë Kravitz pops up in a dreadfully thankless, dead end role as stripper-with-a-heart-of-gold who joins the boys on their road trip for no discernible or concrete reason. Carrie Coon gets even more wasted, popping up in the final act as an FBI agent with only a handful of meaningless lines. And while Reynor has proven to be a capable actor worthy of such high profile positions in major studio films, his work in Kin is frequently off key. One’s never sure if Jimmy is an outright asshole or a scared, stunted adolescent, and the script from Daniel Casey never establishes the character properly. Reynor gives a scattershot performance that varies from scene to scene, which isn’t the fault of the performer, but rather the fault of an increasingly fledgling script. 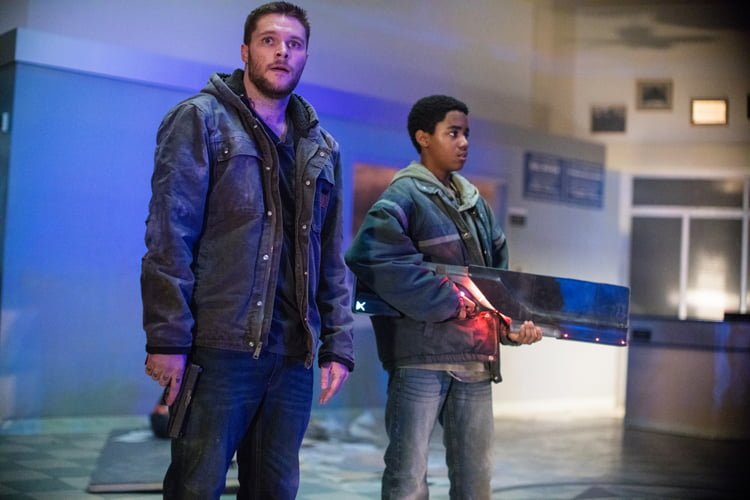 For a film built around an enormous space gun, Kin boasts precious little action until the final twenty minutes, and the gun’s capabilities aren’t even glimpsed until almost the hour mark. The Bakers make up for their film’s pronounced lack of energy by delivering a product that certainly looks more polished than the average first feature. Cinematographer Larkin Seiple (Swiss Army Man, Cop Car, Childish Gambino’s “This is America” video) helps to make Kin one of the most gorgeous looking C-list movies of the year. Every individual image and camera movement in Kin is outstanding, but it’s all in service of material that increasingly backs itself into corners the film can’t escape from.

The middle portion where Jimmy and Elijah are making their way across the country is boring, underdeveloped and deathly slow brotherly bonding stuff. The Bakers can’t finds ways to make the rambling and unnecessarily sleazy road trip (which is too extremely off putting for the kiddie audience the film has been aimed at and too chaste and silly for anyone in a different age bracket) interesting. Not even moments that cut back to see what the gun’s original owners or Franco’s one note tough guy are up to spark much of an interest. The film has been set to cruise control for much of the middle portion, simply killing time until the blow off finale.

By the time the climax arrives, one almost wishes the film stayed on autopilot. Kin doesn’t throw any sense of credibility or likability out the window for its police station siege climax, but rather it tosses all good will into a shredder and then sets everything on fire. It’s one of those climaxes where people conveniently start delivering speeches to stall for time while the heroes figure out a plan, and while I’m sure many will find a film built around a teenager blowing away criminals with a superpowered shotgun morally dubious, it’s the lacklustre and aimless storytelling that really sinks Kin. Things become so unnecessarily awful that it’s up to a big name actor making a left field cameo (who also serves as an Executive Producer) to explain what’s happening in an attempt to set up a potential franchise that will obviously never materialize. Sure, there’s more action in the final moments of Kin than the rest of the movie boasts, but it’s just as boring and head scratching as everything that came before it.

Kin is a pretty bad movie, but it’s not terrible as a first feature outing that’s been pitched at an initially ambitious level. It looks like a million bucks, the casting instincts are solid, and it always walks an intriguing tightrope between young adult movie silliness, adult drama, and elevated genre concepts. All Kin is really missing is a workable script. I wonder how much better Kin would have been if the Bakers were allowed to adapt their short themselves instead of sourcing it out to a third party. It might have been just as huge of a mess, but it probably would have been a lot more consistent and hopefully a lot less of a curious snooze.

Check out the trailer for Kin: