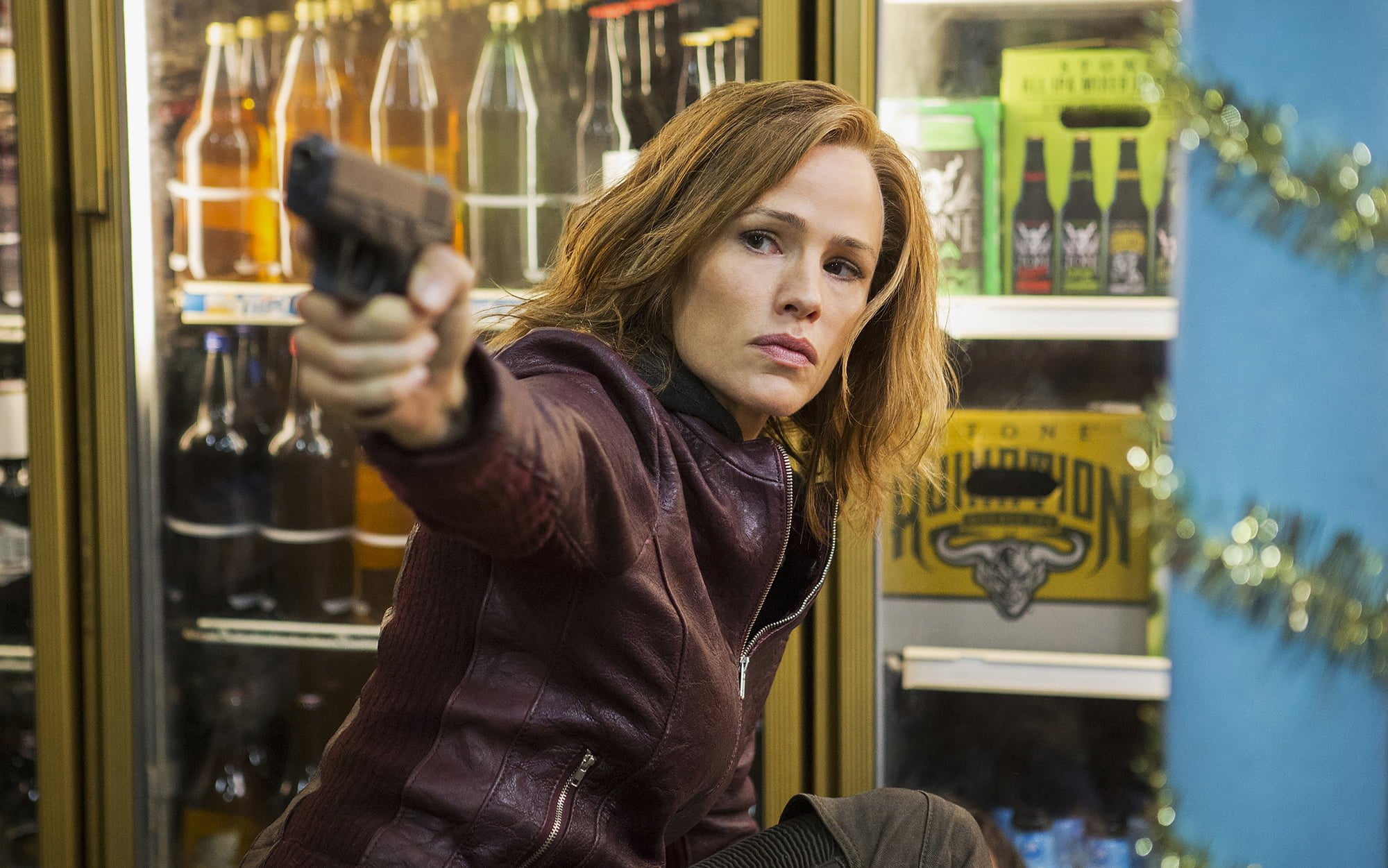 Yet another bland and predictable entry in the long list of revenge films to come out following the surprise success of the Taken franchise, Peppermint casts an aging performer previously known for their work in the action genre as someone who uses their “special set of skills” to get revenge after a violent act is committed towards a loved one. The only real difference in Taken director Pierre Morel’s latest is that Pepperment casts Jennifer Garner as a female protagonist that’s been pushed too far instead of an alpha male, and that her family is already dead instead of being in need of rescue. Outside of that, Peppermint is as standard as reading the “lather, rinse, repeat” instructions on the back of a shampoo bottle.

Garner plays Riley North, a southern California housewife living a relatively normal and unexceptional life with her husband (Jeff Hephner) and daughter (Cailey Fleming). Struggling somewhat financially, Riley’s husband is nearly coaxed by a buddy into stealing a large amount of cash from ruthless drug lord Diego Garcia (Richard Cabral), but he backs out of the deal before he gets in too deep. Even getting the idea to attempt such a risky proposition is enough to warrant a death sentence from Garcia, and Riley watches as her husband and daughter are gunned down in a drive-by shooting while the family was out celebrating the little girl’s pre-Christmas birthday. The detectives assigned to the case (John Gallagher Jr., John Ortiz, neither of whom seems to give a shit) don’t like their chances of a conviction, and Garcia’s men would do anything to keep the mother from testifying in court, but Riley presses on with her belief the three men responsible for pulling the triggers should be brought to justice. In court, Riley is made out to look like a crazy lady with PTSD and a coma damaged memory, and she watches as the men responsible are allowed to walk away. Following the trial, Riley goes into seclusion, travelling the world to train her body and mind to hunt, trap, and kill every last corrupt lawmaker and member of Garcia’s crew. Five years to the day of her daughter and husband’s deaths, Riley resurfaces to exact her bloody revenge.

Peppermint boasts a solidly reliable B-movie premise, and there are some novel story elements crafted by screenwriter Chad St. John (London Has Fallen). The set-up is pure, stock, and tragic action movie hero backstory, but the idea of Riley hiding out among the homeless on Skid Row and acting as a sort of avenging angel for the underprivileged is arguably more intriguing of a concept than the by-the-numbers revenge stuff. Actually, now that I think about it, that one idea of an impoverished female Punisher styled character is the only vaguely original thing Peppermint has going for it. The rest of the film unfolds with no surprises (including a third act twist that should shock absolutely no one) and minimal suspense. It’s point, shoot, and move on to the next dumb thing for almost the entire running time, but Morel deserves some small credit for making Peppermint more in the vein of the original Death Wish franchise than the tone of the Taken films and their nearly identical brethren. 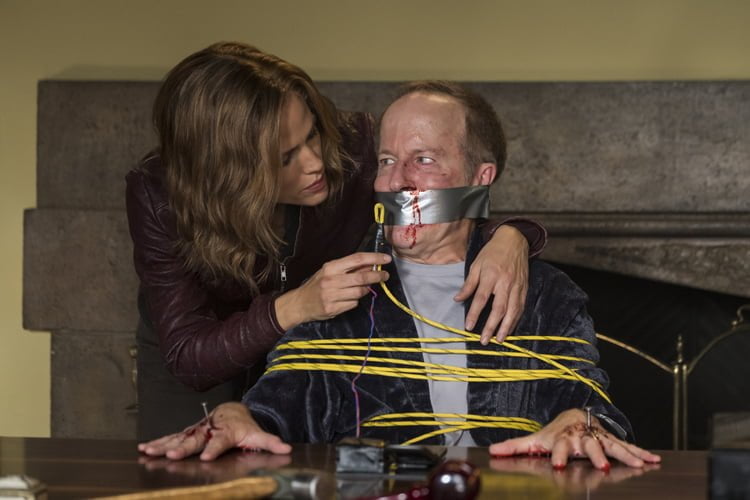 Peppermint is appropriately brutal and bloody, but none of the action sequences and fights will be remembered once the house lights come up. The most memorable cat and mouse shootout occurs in a piñata factory, and that only sticks in the memory because of how curiously racist the entire scene comes across. None of Peppermint is all that fun. If you’re looking for some cathartic, revenge fuelled bloodletting, you’ll get some of that, but it will be delivered with only a moderate level of conviction, style, and authority. If you’re looking for some campy B-movie thrills, you’ll find a few, but you’ll be waiting until the film’s ludicrously illogical final act for any of it to arrive, and even then those few jollies won’t be nearly enough to make up for the rest of the film being a snooze.

Films like Peppermint work best when the hero is played by a leading performer that has been cast against type. Watching someone do a bunch of things they don’t normally get a chance to do is part of the appeal of such films, going all the way back to Die Hard and a time when everyone in Hollywood initially thought that casting the star of Moonlighting as an everyman action hero was a terrible idea. Garner can be a capable action hero even in the worst of projects, and with Alias, Daredevil, The Kingdom, and Elektra under her belt, something like the hero in Peppermint doesn’t seem like that far of a stretch. Garner doesn’t phone in her performance here, but there’s also precious little that she can add to make the film around her any better or more exciting. There’s never a sense that Riley will ever be in genuine danger because the character sheds any sense of vulnerability early on. Once the trial portion of the first act is wrapped up (and we see Garner sporting one of the worst wigs in cinematic history), the actress is resigned to playing a gruff talking blunt object. It’s just as unsatisfying as the rest of the film built around her.

There’s a funny sequence where Riley gets revenge on a snobby mother who made her kid’s life a living hell, and Annie Ilonzeh tries to make the most out of her thankless role as an FBI agent that’s better at figuring out Riley’s whereabouts than the local cops. Those things and the off-putting racist streak are all I remember about Peppermint weeks after seeing it. It’s precisely the kind of film that gets put out in theatres in early September: something that didn’t cost a lot of money, but will recoup investments because it’s being released around almost no competition whatsoever. The film’s title is a reference to the final flavour of ice cream Riley’s daughter ordered before being gunned down. That’s probably because Vanilla would be a terrible title for an action movie, Chocolate would be too interesting, and Strawberry would hint at a much campier film that this script couldn’t follow through on. You’d be better off just going to get some sweet treats instead and enjoying what’s left of the warm weather. By early September, you shouldn’t need air conditioning, anyway, and that’s about all that seeing Peppermint in a movie theatre is good for.

Check out the trailer for Peppermint: