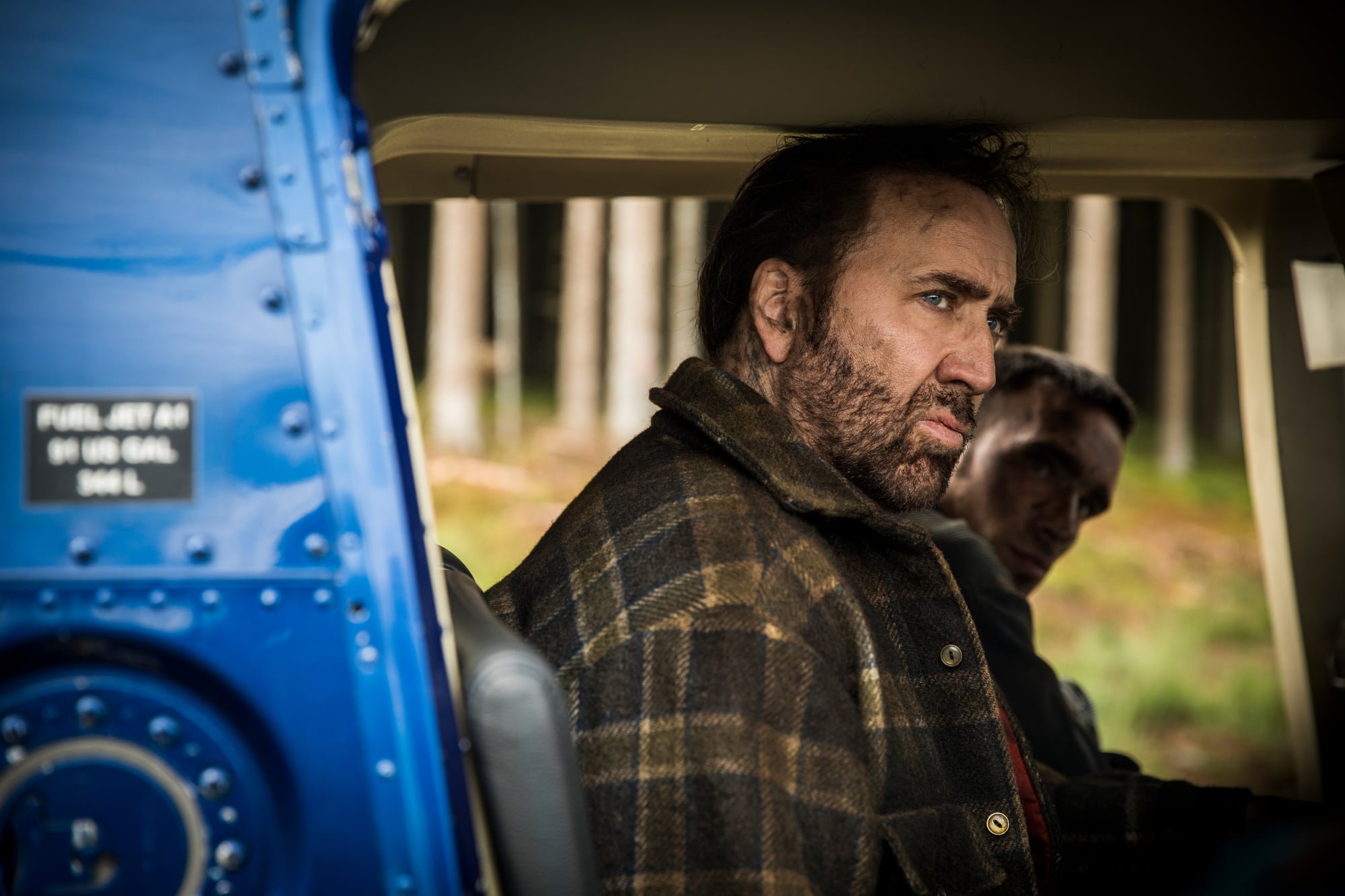 Mandy, the second feature from Panos Cosmatos, is the cinematic equivalent of a black metal album. Trippy, brutal, innovative, endlessly referential, entertaining, and unnerving, Mandy comes across like a transmission direct from the bowels of hell. On paper, Cosmatos’ revenge movie plot sounds like pretty standard genre fodder. In practice, it boasts an almost irresistible, satanic quality that few genre pieces have the guts and smarts to approximate. If viewers thought that Cosmatos’ equally artful and bonkers debut feature Beyond the Black Rainbow was a blast, nothing can prepare them for the sometimes giddy and sometimes sickening bloodletting of Mandy. This film makes a Rob Zombie movie look like work of Thomas the Tank Engine. (And if you can’t gather that I am using all of this flowery language in a complimentary fashion, Mandy EMPHATICALLY is not the movie for you.)

It’s 1983 and logger Red Miller (Nicolas Cage) and his heavy metal loving partner Mandy (Andrea Riseborough) live happily together in a secluded cabin in the woods of the Pacific Northwest. One day, while manning the desk at a local tuck shop, Mandy catches the eye of some unsavoury travellers, who happen to be a part of a cult run by the enigmatic and thoroughly insane Jeremiah Sand (Linus Roache). Jeremiah – whose posse prays to and works alongside a bunch of ghouls that look like a Cenobite biker gang – has become smitten with Mandy and demands his goons kidnap her and leave her husband for dead. Mandy resists Jeremiah’s temptations of sex, hallucinogenic drugs, and rock and roll, further angering the megalomaniac, leading to her death. Eventually freeing himself from the bondage the baddies left him in, Red avoids almost certain death and begins a campaign of unrelenting, increasingly violent acts to get his revenge.

Cosmatos is particularly adept at crafting slow burning mood pieces that never feel boring or static. For the first half of Mandy, the pace is leisurely and restrained, even amid occasional flourishes of violence. It has the feeling of a foreboding acid trip that’s eventually going to go horribly wrong for anyone taking the drug. From a storytelling perspective, spending the entire first hour of the film looking at things from the perspective and plight of the titular character makes the grotesque revenge movie stuff more impactful. Cosmatos might be emphasizing his visuals and the overall insanity of his film, but Mandy wants all its rivers of blood to flow with meaning and emotion rather than hollow, cheap gore. And while the subject matter is admittedly bleak and stark, Cosmatos is savvy enough to not take the material too seriously, imbuing the film with plenty of bilious humour.

Mandy opens to the strains of doom metal, a tone that’s carried throughout thanks to the brilliant final score from late, Oscar nominated composer Jóhann Jóhannsson (whose passing adds an unintentionally eerier connotation to every scene). It’s visually grainy, gritty, and every colour in sight is either muted or blown out to extremes. Mandy is a film filled with arterial reds, emerald greens, searing oranges, and the blackest of blacks. The visual palate is refreshingly experimental, but also thoughtfully implemented; a balance of the gorgeous and ugly that Hieronymus Bosch would envy. It’s a work of borderline evil, but wholly honest and earnest art; the wares of a filmmaker who wears his pop culture influences proudly on his sleeve, visually checking everything from Abraxas to Friday the 13th Part VII. Much like his debut feature, Cosmatos proves to be the kind of pop artist and stylist who likes to recontextualize his greatest influences instead of outright rehashing them. This is a film made with deep love for all supposedly disreputable and trashy cinema that happened from the 60s to the 80s, but one that never resorts to outright theft or cold, dead clichés.

While most will probably be allured by Mandy’s promise of a classically batshit Nicolas Cage performance, it’s Riseborough’s poise and grace that provides Cosmatos with a strong, moral centre to build dark branches and connections. She’s strong and capable, but also a woman in an unwinnable situation. While the full nature of Mandy and Red’s relationship remains somewhat obtuse outside of a handful of scenes that showcase the actors’ natural chemistry with each other, it’s easy to see why the character’s name gives Cosmatos his title. Thanks to Riseborough’s destined to be underrated performance, it’s easy to root for Red and his quest to wipe these scummy jerks from the face of the earth.

Once the film transitions to Red’s revenge, Mandy becomes exactly the kind of genre exercise that Cage completists and gorehounds hope it would become. Cage’s bug-eyed intensity and eccentricities are a perfect fit for Cosmatos’ take-no-shit cinematic attitude. But what sets this apart from many of other Cage’s “nouveau shamanic” turns is how Cosmatos starts his character off from a place of truth and restraint before unleashing the inner beast. Mandy makes the audience work for the crazy bits and engage with the visual material before rushing into the performative payoff. Not all filmmakers could make something like this work, and I’m certain that Cosmatos is the only filmmaker alive who could have made Mandy in the first place. It’s a work of immense talent and some absolutely twisted, but welcome storytelling decisions.

Mandy opens in select cities on Friday, September 14, 2018. It is also available on VOD platforms the same day.

Check out the trailer for Mandy: