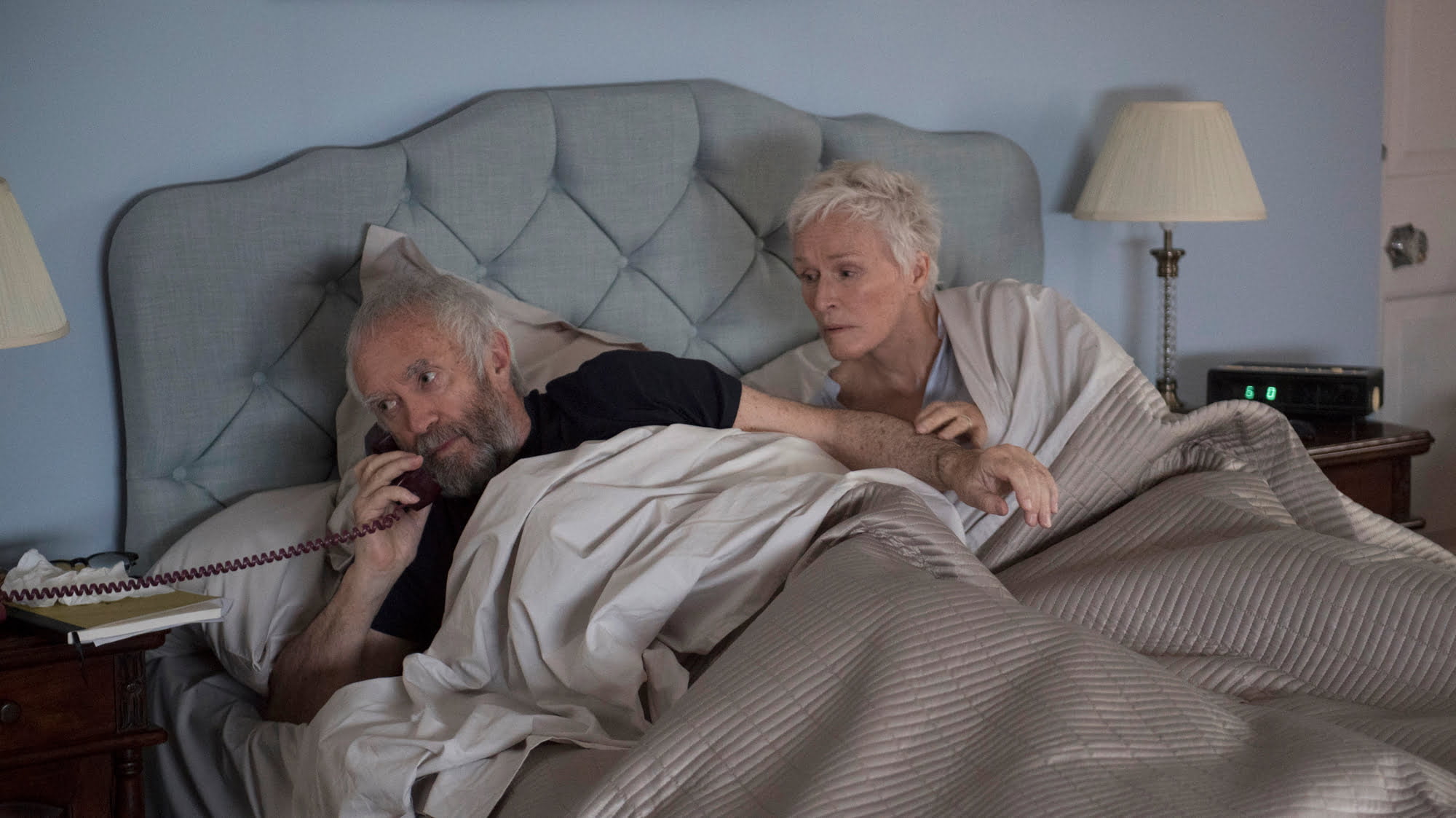 The marital and literary world drama The Wife is the kind of film that values a false sense of intellectual superiority over realistic human emotions or artfulness. Strenuously trying to sound smarter than its threadbare, predictable, and clichéd plot can handle, The Wife is the type of film that gives its talented performers plenty of material to sink their teeth into, while simultaneously giving nothing of interest back to the audience in return. It’s the kind of motion picture that imposes itself on the audience instead of asking them to engage with what they’re seeing. It’s competently made, hyper-articulate, and exceptionally performed, but it’s all in service of a potentially interesting story that’s told with maximum smugness and a coldly distancing tone.

Adapted from a novel by Meg Wolitzer by screenwriter Jane Anderson (How to Make an American Quilt, It Could Happen to You), The Wife opens with celebrated novelist Joe Castleman (Jonathan Pryce) learning that he’s just received the Nobel Prize for Literature. Joe shares in his jubilation with his wife of nearly forty years, Joan (Glenn Close), and they prepare to make the trek to Stockholm to attend the award ceremonies. Initially, things seem peachy between the boisterous author and his supportive life partner, but a chance encounter with a sleazy, overly eager potential biographer (Christian Slater) will cause a long simmering moral conflict that’s Joan has been repressing to boil its way to her normally stoic surface.

Directed with a pedestrian eye and sense of pacing by Swedish filmmaker Björn Runge (Daybreak), The Wife is a film that seeks to coast on cliché and unsubtly foreboding and symbolic repartee. Outside of the cast members reading every portentous line of dialogue with appropriate gravitas, The Wife has been produced with curiously little emotional effort and such a stifling attention to predictable storytelling tropes that there are barely any signs of life. It takes almost an hour for any of the characters to show any semblance of a pulse because Runge and Anderson are so rigidly obsessed with performance and shining a megawatt spotlight on their trail of narrative breadcrumbs (or walnuts in the case of the film’s most laughable dramatic symbol) that nothing feels organic or earned. The Wife walks and talks like melodrama is beneath its high minded world view, but it ends up becoming the very thing it seeks to side-step, both consciously and unconsciously.

Every line of Anderson’s faux-intellectual and shamelessly pandering dialogue might as well be delivered with swirling glasses of brandy affixed to the hands of the performers at all times. It’s the kind of heavily stylized depiction of the intelligentsia that Masterpiece Theatre would find a bit too gauche. They speak like characters in a novel, not human beings in a setting that’s supposed to be realistic. Such flowery prose could stand up to scrutiny in a film that’s set in the Victorian era, but not in a motion picture that’s set in 1992. Every character feels like a relic that’s representative of the most hackneyed of storytelling clichés: the long suffering wife, the artist with the wandering eye, the ruthless and amoral journalist, the aggrieved and frustrated son of geniuses, etc.

To make matters worse, Runge and Anderson attempt to laugh off these clichés by admitting to them up front. In a film that felt more organically relaxed and less smothering, such an approach would be a novel twist. In The Wife, such a stylistic gambit comes across as disingenuous and tone deaf. Everything about The Wife is a cliché, and simply admitting that no one involved with this production has any new ideas doesn’t offer an excuse. No matter how prosaic the dialogue, a cliché is still a cliché, and the casting of talented actors doesn’t change the desperation of the material. It doesn’t make The Wife interesting. It just makes the film smug and pandering at the same time; the kind of film that sounds smart, but says precisely nothing. 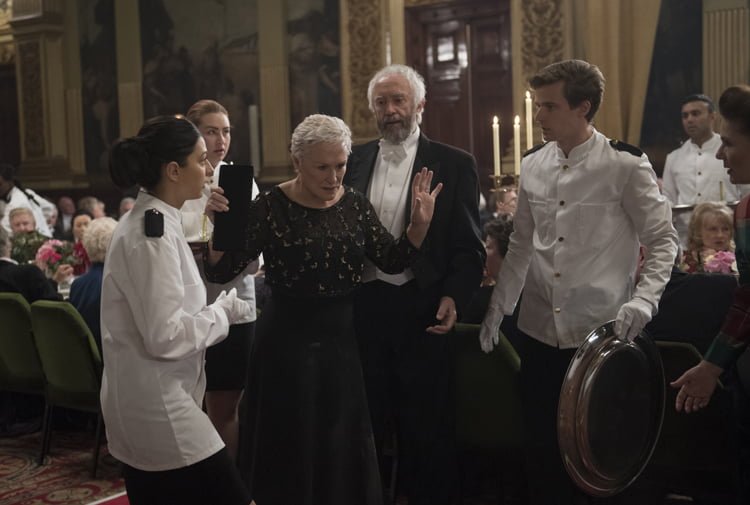 From the opening frames, Runge offers zero ambiguity to where The Wife is heading. It’s painfully obvious that the relationship between Joe and Joan Castleman isn’t the portrait of marital bliss that everyone makes it out to be. There’s never any doubt that Close’s tight lipped and genial spouse will eventually snap and become irate for being seen as the muse of her lauded male counterpart. All too brief flashbacks to Joe and Joan’s time in university during the 1950s – where he was a married professor and she was a student – play better than the film that sucks up most of The Wife’s running time. Annie Starke (Close’s real life daughter) is a revelation as young Joan, and Harry Lloyd nicely plants seeds of inadequacy that Pryce can gamely pull from as the floundering novelist. The story of the young people in The Wife is far more intriguing and fruitful than the bulk of Runge’s film.

Close and Pryce are typically outstanding, remaining watchable and engaging in spite of the trite material. They’re two great actors that are seemingly incapable of delivering bad performances, and their chemistry feels realistic even when the words coming out of their mouths sound like they’re reciting a book-on-tape. They bring passion to their parts, and almost make up for the film’s myriad shortcomings in the process. Both have been generating award season buzz for their performances here, but while they’re perfectly adequate, celebrating solid turns in a resolutely mediocre film is a bit like throwing a parade for someone who can get on and off a public bus without instruction. We know they’re capable of this, and they find material to play with amid the film’s rigid framework, but it doesn’t make their performances more interesting to watch.

Slater’s supporting turn reeks of someone who’s way out of their depth, and isn’t helped by Runge’s unsubtle and unintentionally funny desire to show his character as some sort of trickster ghoul in the background of several scenes. In fact, his character doesn’t even need to be included in the film for the story to work, and it takes the place of flashback sequences that rob the viewer of the genuinely nuanced work being put in by Lloyd and Starke. Max Irons also has the superfluous character of Joe and Joan’s adult son – a struggling writer in his own right – but he also gets the film’s only genuinely rousing moment when he stands up to his father’s empty, hollow, and hypocritical criticisms.

Drama comes from tension, and The Wife lacks in both departments. The story of The Wife is so predictable and rote that no tension or momentum is ever generated. It’s a story about people who refuse to say the things that are on their mind, and when the viewer knows precisely what those issues are across the entire running time of the film, those dramatic dust-ups that The Wife tries so hard to build towards hold curiously little impact in spite of the actors’ best efforts. It’s simultaneously as wooden as a two-by-four and as on-the-nose as a pimple, but it’s also hyper-intellectual to the point of silliness. If not for the cast, The Wife would be irredeemably dreadful.

The Wife opens at Varsity Cinemas in Toronto and Fifth Avenue Cinemas in Vancouver on Friday, September 21, 2018. It opens in Montreal on September 28 and expands to other Canadian cities throughout the fall.

Check out the trailer for The Wife: