Review: The House with a Clock in Its Walls 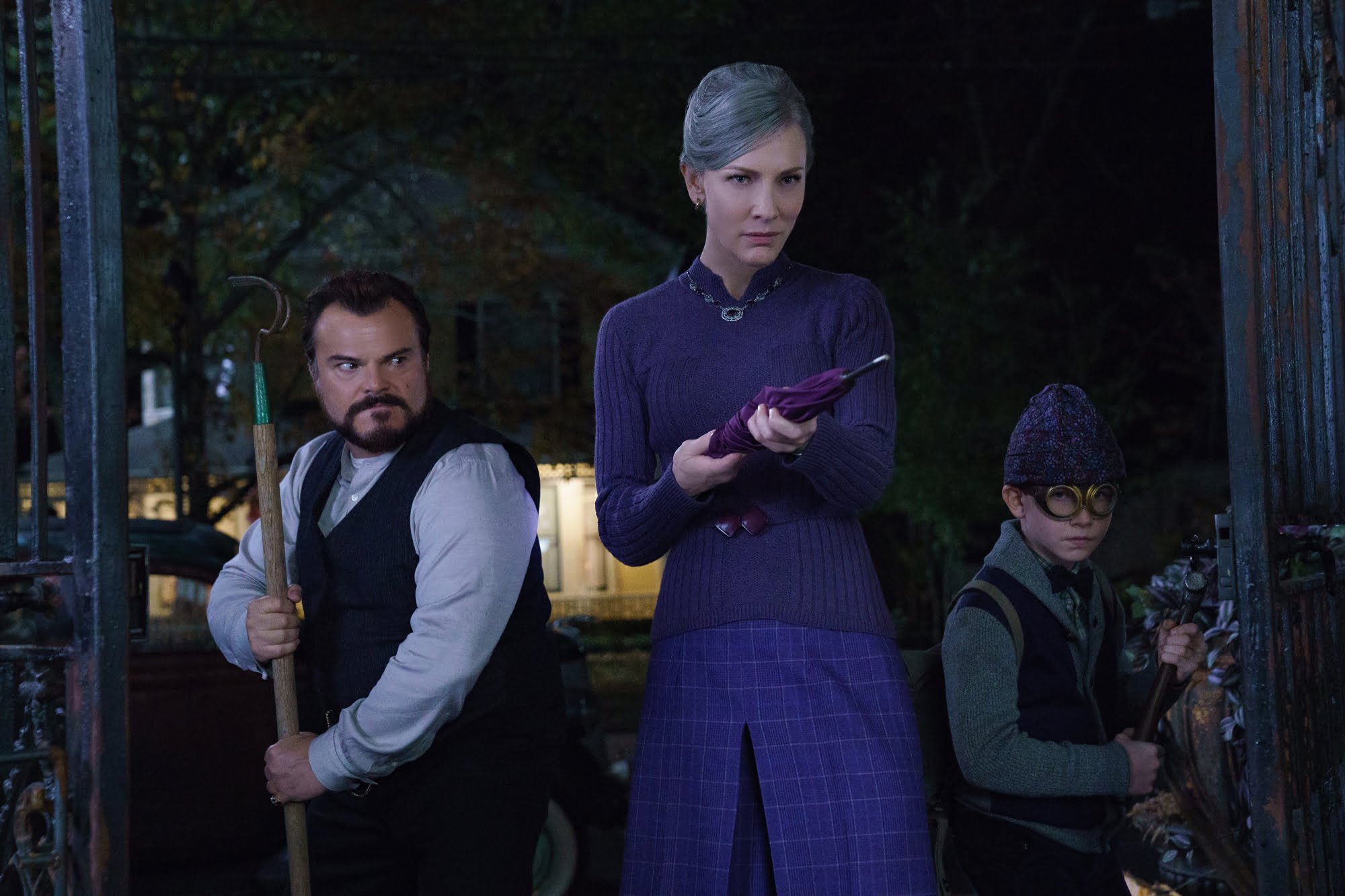 As familiar and inviting as a mug of hot chocolate and a comfortable sweater, the seasonally appropriate young adult fantasy The House with a Clock in Its Walls gets the Halloween movie cycle off to an earnest, whimsical, and entertaining start. Based on the 1973 novel of the same name by John Bellairs, The House with a Clock in Its Walls comes to the big screen via the unlikely tandem of director Eli Roth and screenwriter Eric Kripke. The combination of somewhat antiquated material by modern YA adaptation standards (set in the 1950s) with a normally grotesque and dark filmmaker and the creative force behind one of television’s most quietly enduring television series sounds like an odd witch’s brew, but damn if it doesn’t yield some satisfying, if ultimately lightweight popcorn movie results.

Following the death of his parents, ten year old Lewis Barnavelt (Owen Vaccaro) is sent to live with his uncle, Jonathan (Jack Black), in upstate Michigan at his spooky and seemingly haunted mansion. Superhero loving Lewis has a hard time fitting in and making new friends, outside of bonding with Jonathan’s next door neighbour, Florence (Cate Blanchett). Jonathan’s life takes a turn for the exciting, however, when he learns that his uncle is a semi-powerful warlock. Jonathan and Florence (who are best friends, but not romantically involved) Lewis under their wing to show him the magical ropes, all while trying to protect the young man from a secret hidden within the walls of the house. The former owner of Jonathan’s home (Kyle MacLachlan) was an evil warlock who built and hid a doomsday clock somewhere on the premises. Once the clock sounds its final chimes, the world will be reversed back in time to a point before human existence. Jonathan and Florence have been trying desperately for the better part of a year to locate the device, but it might be a bad decision made by young Lewis that will both help and hurt everyone around them.

While the film is visually ornate, flashy, packed with inspired sight gags, and exceptionally pretty to look at, The House with a Clock in Its Walls isn’t designed to outright terrify or scar the film’s young skewing demographic. There are plenty of spooky effects: MacLachlan’s gravelly and modulated voice, a relentless onslaught of flying and attacking books, creepy dolls that block entrances, and man eating jack-o’-lanterns. To offset that, there are plenty of decidedly less scary CGI constructs: a farting topiary, an armchair that behaves like a dog, a constantly changing stained glass window. It’s a nice blend of the frightening and the fantastical, creating a well thought out sense of time and space to act as a cinematic sandbox. 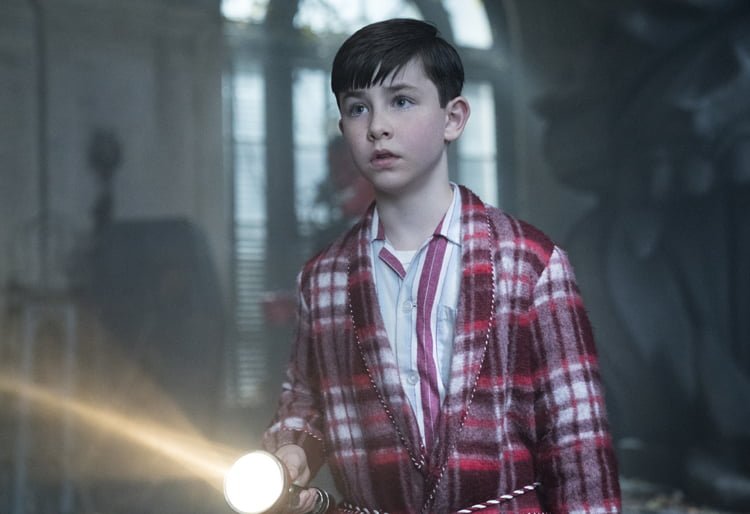 It’s almost impossible to believe that Roth (Cabin Fever, The Green Inferno, Hostel) and Kripke (the man behind Supernatural) had something like The House with a Clock in Its Walls in them. Not only does it seem like their styles wouldn’t mesh well together on paper, but that such an adaptation geared towards a younger audience wouldn’t be in either of their wheelhouses in the first place. While Kripke struggles slightly to build such an ornate and detail oriented world within the confines of a single, briskly paced script, Roth’s direction is handily the best work of his career. Roth displays a playful and generous side that his other films to date have lacked entirely, approaching such a chance like a kid in a candy store. It’s directed with a maximum amount of energy and giddiness that balances and tempers his ability to craft audience jolting jump scares with the storytelling sensibilities of someone’s cool uncle. It’s a nice turn in his filmmaking career, and The House with a Clock in Its Walls shows that Roth is more than capable of branching out further into blockbuster fare.

Speaking of cool uncles, Black seems to have found a new niche for himself with roles like this. Between Goosebumps and Jumanji: Welcome to the Jungle, Black has become the go-to performer to play grown adults with the hearts and minds of children. Here, Black imbues Jonathan with equal parts duty, responsibility, and impishness. Black has always had the ability to make even the corniest lines of dialogue funny through clever uses of inflection and timing. He can make almost anything work, and here’s he paired alongside a veteran performer like Blanchett , who appears to be having an absolute blast. Their chemistry is delightful, and I guess it’s hard to be a grump when a film calls for you to head-butt a pumpkin before doing a cartwheel. The leads understand exactly the kind of balance between the silly and the serious that The House with a Clock in Its Walls needs to be.

Vaccaro is also a good choice of lead, but Roth might not be the best director of young people. Whenever the film calls upon Vaccaro to be a normal, awkward, sometimes bullied kid, the young man is more than up to the task. Whenever he’s asked to cry or show bigger emotions, the results are a lot less successful, but given the overall feel-good nature of The House with a Clock in Its Walls, that’s a relatively minor demerit. Vaccaro remains likable and sympathetic throughout, which is what matters most for a film pitched at such a crowd pleasing level.

As an adult, I’m fully aware of how clunky, conveniently plotted, and sometimes disjointed The House with a Clock in Its Walls manages to be, but I also know that if I were ten years old again and Halloween was fast approaching that I would gobble Roth’s latest up in a heartbeat. There’s a casual, endearing familiarity to everything on display, but it never feels pandering or in service of a filmmaker’s sense of nostalgia. It’s family fantasy played perfectly straight, and it’s as comforting as the sound of rustling leaves and the smell of wood burning on a chilly autumn evening.

The House with a Clock in Its Walls opens in theatres everywhere on Friday, September 21, 2018.

Check out the trailer for The House with a Clock in Its Walls: