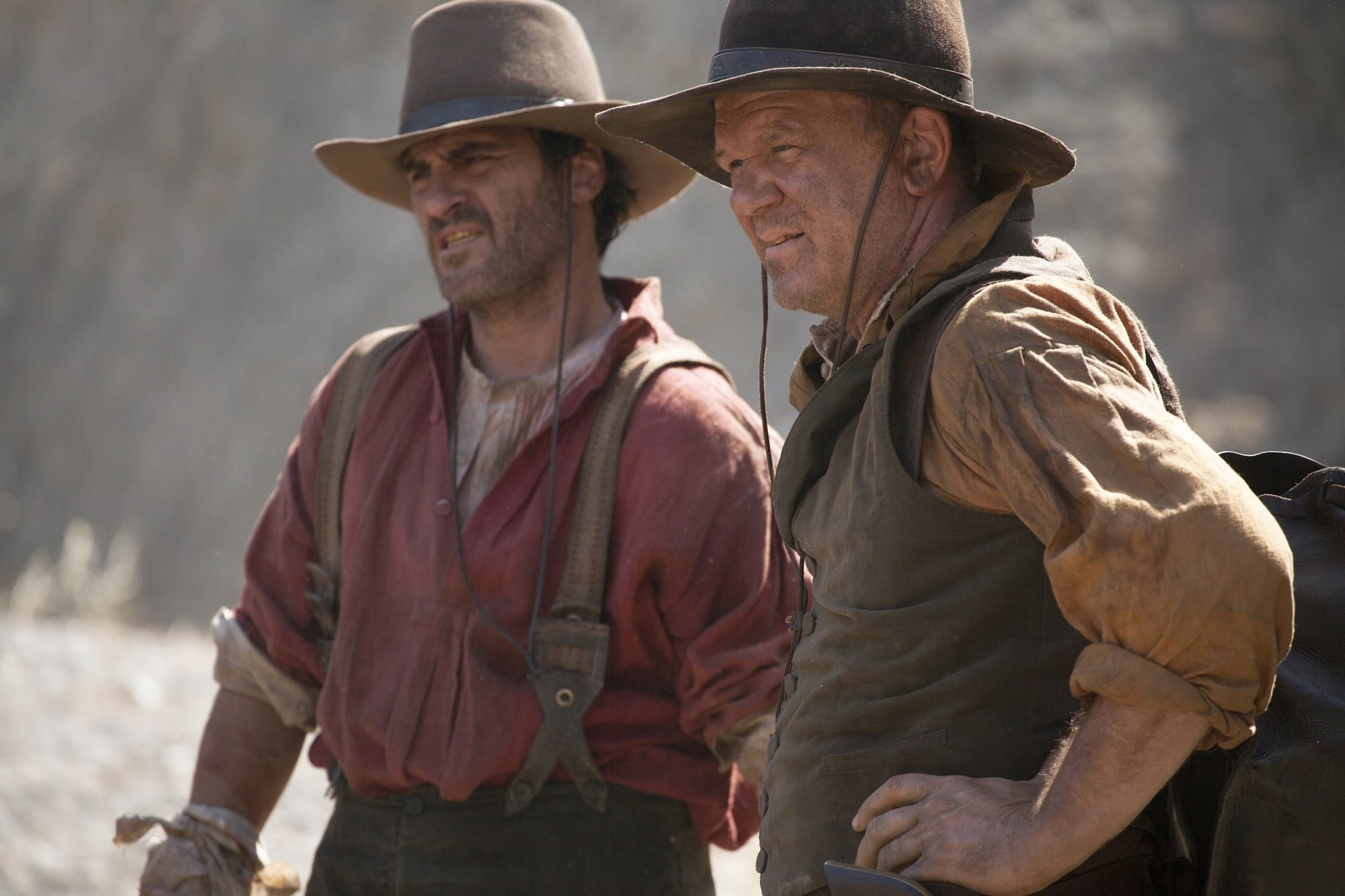 A unique, beguiling, and subtly humorous take on the western genre, French filmmaker Jacques Audiard’s adaptation of Canadian novelist Patrick DeWitt’s The Sisters Brothers breathes ingenious new life into a cinematic artform that always feels like it’s on perpetual life support. This tale of bounty hunting brothers, a wayward detective, and an idealistic chemist trying to make a living in the harsh economic and environmental climates of the 1850s boasts a highly qualified cast of leading men, a sly, deadpan sense of humour, and a genuine sense of unpredictability. It’s a non-traditional sort of period piece, which sets it apart not only from other westens but also from any of Audiard’s more recent efforts.

Eli (John C. Reilly) and Charlie Sisters (Joaquin Phoenix) are a pair of sibling bounty hunters based out of Oregon, working for a wealthy, reclusive, and little loved tycoon. After a somewhat botched job drives a rift between the Sisters brothers – with level-headed Eli growing upset that impetuous younger brother Charlie has been somewhat promoted – their boss sends them off on a new mission. Eli and Charlie are tasked with finding and killing Hermann Kermit Warm (Riz Ahmed), a prospector accused of theft. Private investigator John Morris (Jake Gyllenhaal) has been sent ahead of Eli and Charlie to keep tabs on the elusive Hermann. The detective grows fond of the person he’s been tracking, especially when Hermann makes it known that he’s used his skills as a chemist to devise a new method of mining for gold. John stops helping Eli and Charlie long before they catch up to Hermann’s travelling party, and while they’re initially irked, they’re willing to wait and see if the new mining method could be more profitable than the life of a bounty hunter.

While Audiard’s English language debut still maintains the sometimes gruesomely violent beats that most westerns revel in, The Sisters Brothers has been made with a more delicate, less forceful, and character based approach. The first hour of The Sisters Brothers is spent getting to know what makes each of the four main characters tick, and the viewer is introduced to their traits, flaws, and quirks in different ways. Eli’s development in the eyes of the viewer comes as the result of a string of comically unfortunate events and setbacks. John’s motivations and shifting allegiances are conveyed via the letters he sends to the Sisters as a means of reporting in on various developments. Similarly, Hermann is glimpsed initially through the eyes of John, immediately making the character appear sympathetic and on the level. It’s only the perpetually uppity Eli that remains a bit of a short-fused blank slate, but the poignant, bittersweet reveal contained within Audiard and co-writer Thomas Bidegain’s screenplay is built almost entirely around how the character learns to live with his past mistakes and subtly atone for them. The film belongs entirely to the development and maturation of these four characters, and very little around the film’s purposefully simplistic plot.

Each actor brings their proven range of talents to The Sisters Brothers, and without their immense abilities as performers, Audiard’s film might be nothing more than a borderline experimental curiosity. Reilly anchors the cast in the kind of role he built his early career upon: a likable, well spoken doormat that everyone around him takes for granted. He builds a great rapport with Phoenix, who gets to play against type as the most naturally humorous character in the film. Tossing off tales of grand exploits that he makes sound like no big deal (like staving off a bear attack that threatens their camp in the middle of the night), Phoenix makes Eli sound like the most humble braggart in the west. Similarly, Phoenix gets to showcase Eli’s boyish sense of wonder at some of the littlest creature comforts, and his character’s disdain for anyone he deems an egghead. It’s the consummate little brother character, and Phoenix embraces it wholeheartedly. 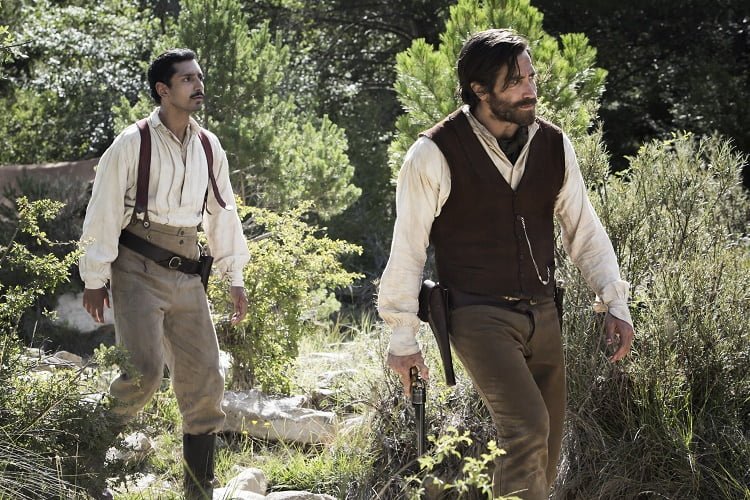 Ahmed and Gyllenhaal (who previously worked together in a similar mentor-mentee capacity in Nightcrawler) have a relationship based astutely on the characters’ keenness to live a better life than the ones the American west have presented for them. Hermann wants to use his earnings mining gold to build an idealized commune in Texas, while John more simply wishes for a life better than the brutish life he currently leads as a second fiddle for better paid bounty hunters. The characters dovetail nicely into one another, and watching these four interact is a low key masterclass in character acting. They’re basically the only characters worth noting in the film, and watching them collide with each other is an absolute joy.

Audiard (Rust and Bone, A Prophet) displays a fascination and knowledge for period detail at every level of The Sisters Brothers’ production. Although all of the characters are erudite in their own specific ways, they speak in different, period appropriate cadences belying their social standing and level of education. They feel like they inhabit the same universe, but rarely look at the world beyond their own narrow perspectives. That land they inhabit is vast and largely barren, with cinematographer Benoît Debie (best known for his collaborations with French provocateur Gaspar Noe) frequently revelling in natural light, no matter how dark things get at night or how washed out the colours of daylight become. The Sisters Brothers is filled with plenty of silly, idiosyncratic touches, but all of them feel authentic and reasoned. The art being employed to tell such a story perfectly fits the narrative and characters caught within it. The Sisters Brothers has been crafted with a lot of thought and care, and while some viewers will be assuredly perplexed by the film’s unique tone and sense of humour, none of it feels phony or forced.

The Sisters Brothers is a nice change of pace for all parties involved, but especially Audiard, who relishes the chance to loosen up from his normally melodramatic presets here. It’s dusty and rough around the edges, but never a film that sacrifices wit and intelligence for the sake of easy emotional catharsis. By the time Audiard arrives at his film’s unexpectedly moving and morally ambiguous conclusion, The Sisters Brothers has earned the trust of the viewer to follow along wherever the filmmaker wants to lead them. It’s not as adventurous or action packed as the average western, but something tells me that the reality of the old west was a lot more in line with Audiard’s vision.

Check out the trailer for The Sisters Brothers:

This film screened as part of the 2018 Toronto International Film Festival.