Review: All About Nina 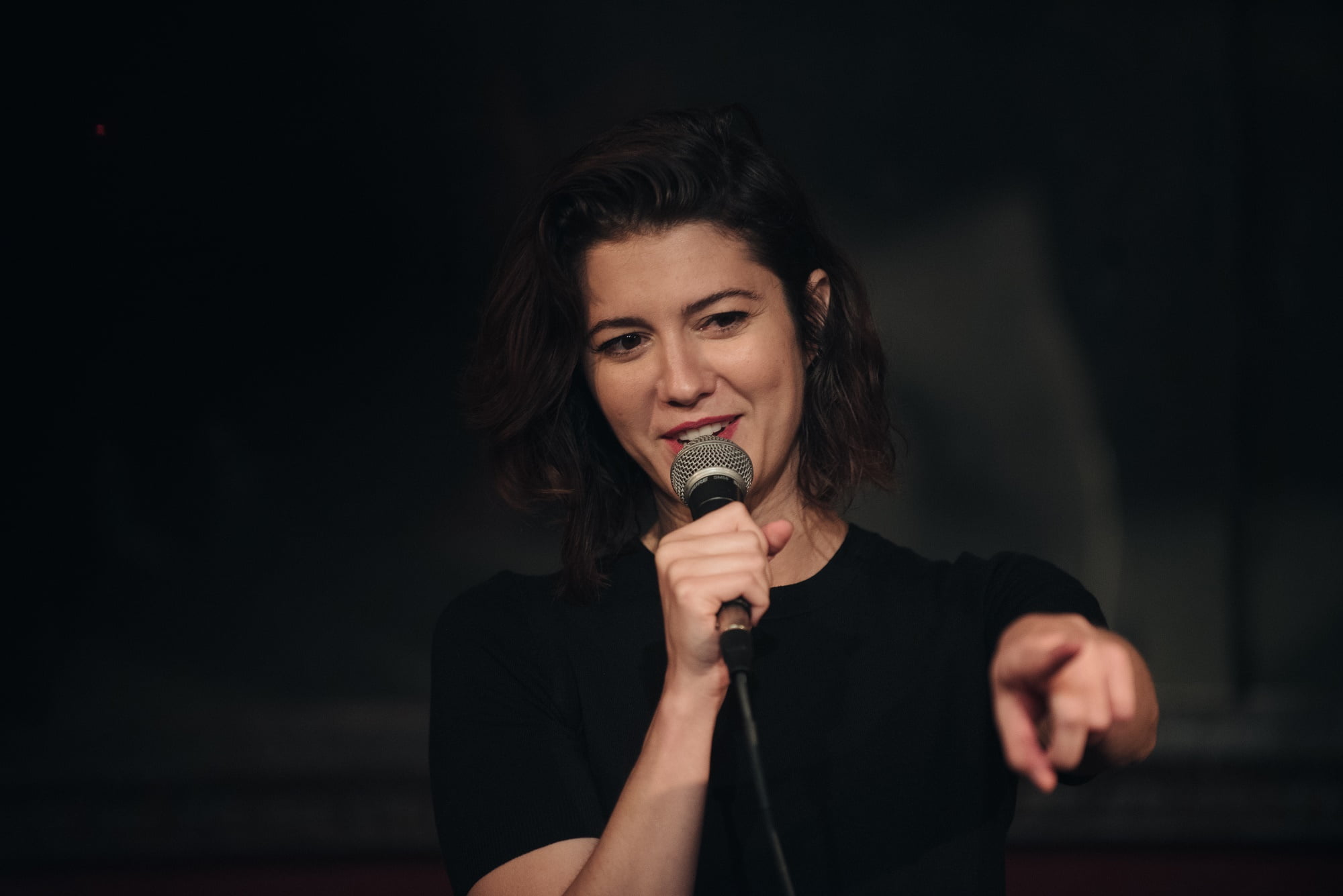 All About Nina is a mediocre, unsurprising look at the darkness lurking in the hearts and minds of many stand-up comics that’s elevated considerably by a note-perfect and blistering leading performance and one timely scene that’s one of the year’s best stand alone moments. The first feature from writer-director Eva Vives, All About Nina has little, if anything new to say about the self-loathing, narcissism, and insecurities that belie many funny people, and the switch from a leading man to a leading woman adds shockingly little value until the film’s impressionable and impassioned conclusion.

Nina Gold (Mary Elizabeth Winstead) has been working her through the upper-middle ranks of the New York City comedy scene. Her profane, sexually explicit, and unabashedly truthful material naturally resonates with female audiences and gross dudes who misread the vibe and think her candour equals an invitation to get her into bed. Like most stand-up comics, her life’s a complete mess, and she has the alcohol abuse that seems to come with the territory. She does sleep around a fair bit, never having been with a man for more than a single evening at a time, with the exception of Joe (Chace Crawford), an abusive, obsessive, and married police officer. Fed up with having to deal with Joe’s increasingly stalkerish behaviour and not getting any new gigs, she begs her extremely pregnant agent (Angelique Cabral) to get her some auditions in Los Angeles. She flies out to the opposite coast – staying with a mystically minded free spirit (Kate del Castillo) – and prepares to audition for a high profile television series as their token female choice for the year. While there, she starts hooking up with Rafe (Common), a contractor and musician, who might not be telling the truth about his past relationships, but seems like the first good and stable guy that’s been in her life for quite some time (possibly forever).

Having a love for the art of stand-up and everything that goes on backstage is absolutely a prerequisite to one’s enjoyment of All About Nina, and in the interest of full disclosure, I’ll admit that I’ve never had a huge investment in that particular form of comedy. I almost never laugh at what’s being said in a stand-up routine, even if I don’t mind the storyteller that’s presenting it. If a stand-up is being honest and truthful – like Nina Gold – I’ll maybe smile and nod at best. So much of All About Nina is built around the titular character’s act that if you don’t like stand-up, you’re more or less out of luck on the humour side of things. I’ve always appreciated the bravery, confidence, and storytelling chops that it takes to go on stage and tell jokes that people might not laugh at, and thankfully the character of Nina is portrayed expertly in those lights.

The character of Nina has an interesting arc. For about two-thirds of the movie, she’s the stereotypical tortured stand-up. She’s curt, blunt, quick to judge, pushy, needy, and displays few likable moments of humanity thanks to defense mechanisms that interprets compliments as attacks. It’s no different from any male version of this character that’s been drummed up by countless testosterone and tear driven screenwriters over the past several decades. It’s understood by now that stand-ups are often funny people who are dying inside and desperately seeking attention, but not necessarily the accolades that attention brings. All About Nina isn’t doing much to break this mold for the majority of its running time, and it comes across as pat and predictable. 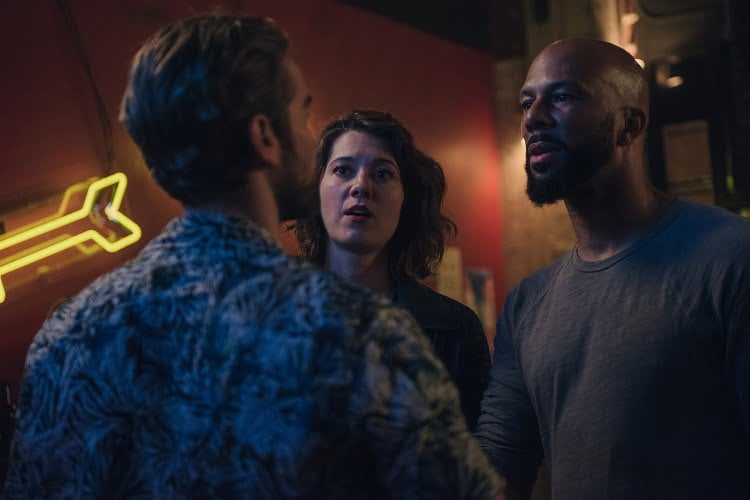 There’s so much more that Vives could be doing with a tale about a semi-successful comedienne. There’s lip service paid to the rampant inequality of the industry. There’s talk about the fine lines between a performer’s on stage persona and off stage reality. Nina’s sets are unrepentently packed with jokes about periods, casual sex, and women’s issues, but they kind of stop dead at the stage, which is initially strange for a film about how close Nina’s material is supposed to mirror her reality. Perhaps most disappointingly, Nina acts like just another one of the boys whenever she’s backstage. She’s tough, smart, and suffers no fools, and while she’s refreshingly not an exemplary member of her gender, the larger issues that Vives could be talking about through Nina are mostly left hanging out to dry.

I say “mostly” because a lot of what I just mentioned builds to a fine point leading into the climax of All About Nina, a sequence that starts off from a place of illogical, melodramatic narrative convenience, but leads into one of the most impassioned and timely scenes in any movie this year; a moment that expertly takes the temperature of the current cultural climate and holds nothing back. In this moment, we learn something about Nina that most comics – especially male ones – would never dare to talk about. Suddenly, the film explodes into relevant and depressingly realistic light. It’s delivered in such an impressionable and forceful way that this single scene succinctly and engagingly delivers the one major point that Vives has been trying to make the whole time. It’s a point that shouldn’t be forgotten and shouldn’t be taken lightly. It’s a shame that All About Nina doesn’t immediately cut to black after that scene, instead meandering a bit more towards a less satisfying form of ambiguous conclusion, but that doesn’t dilute its impact. That one moment is a five-star moment, and while I don’t want to give it away, anyone who will or who has seen the film will know precisely what I’m talking about.

It helps that such a wishy-washy film is anchored with nerves of steel by Winstead, a performer who feels like her entire career has been building to a performance that’s this expertly crafted. Winstead has a way of making Nina speak like every other word is a punch, jab, or slap. Nina swaggers and broods even to her mother (Camryn Manheim, in a small, but pivotal and wonderful role). She doesn’t have many friends, and she doesn’t want any outside of the people who laugh, applaud, and go on their merry way. Crafting a performance about someone who’s a keen observer of human nature that simultaneously seems to view everyone around her with open disdain is hard, especially when trying to keep the interest of viewers who are supposed to sympathise or empathise with her. Winstead is exactly the kind of underrated talent who excels in these sorts of roles, and next to her devastating turn as a recovering addict in Smashed, All About Nina represents some of her career best work. Even if the story and direction aren’t doing anything special or original, Winstead demands a viewer’s attention every step of the way. Even her scenes alongside Common, who’s genial, but dreadfully out of his element here as a performer, crackle thanks to her detailed character work.

While nearly every film about stand-up comics are trot out the same self-destructive red flags for all their main characters (except for maybe The King of Comedy, which isn’t actually about comedians), All About Nina is still one of the more intriguing takes on such material. It’s still a predictable slog for the most part, but it’s one made with passion and the conviction that it’s building towards something larger than the film itself. It doesn’t make All About Nina a great film, but does make it something relatively important. That assuredness, the one great scene, and Winstead’s impeccable leading turn are almost enough to make up for how the rest of the film feels like a boring and missed opportunity to do something with a bit more bite and bile.

All About Nina opens in select Canadian cities on Friday, October 12, 2018.

Check out the trailer for All About Nina: