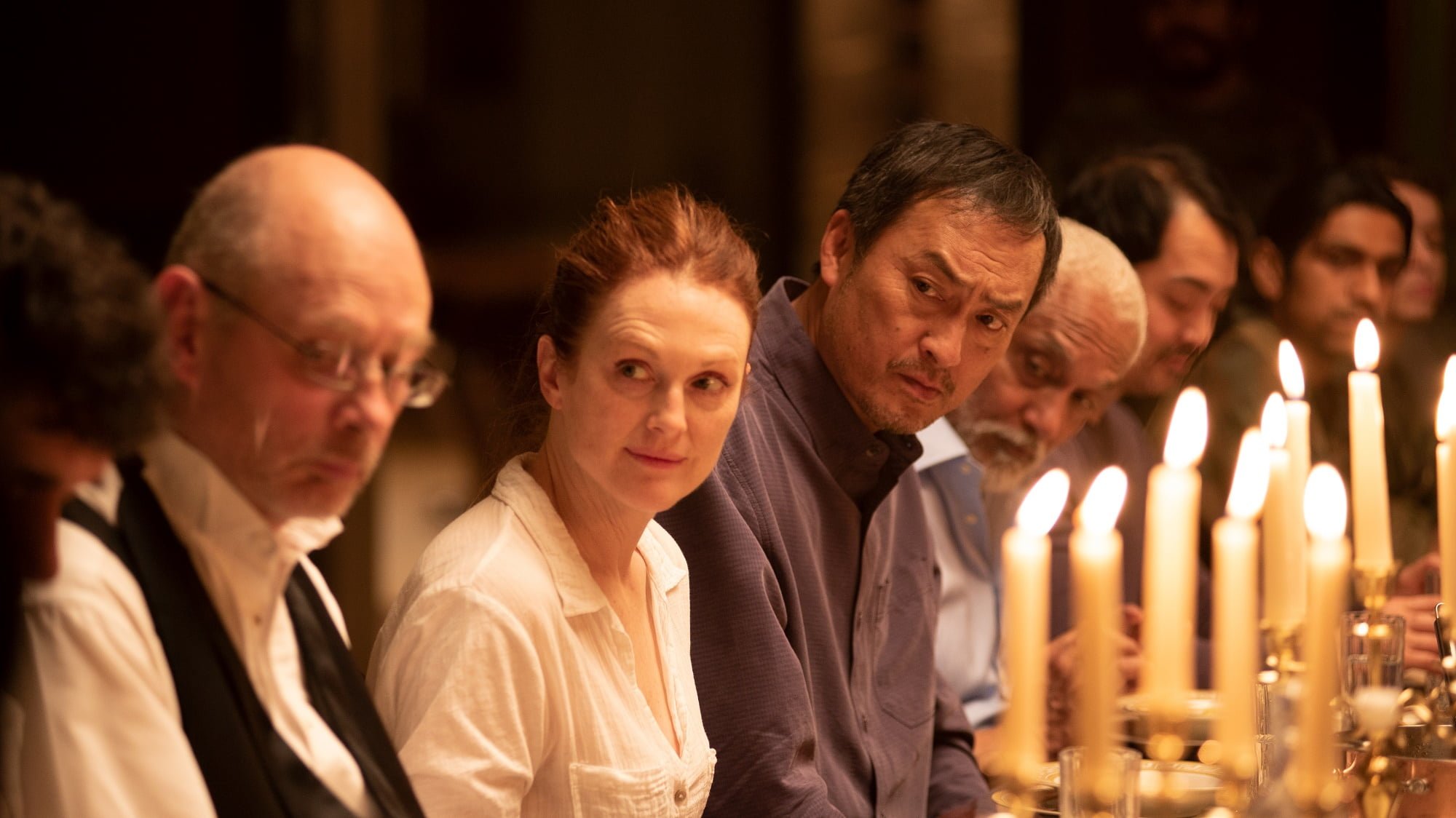 A lukewarm (and frankly pointless) hostage melodrama, Bel Canto strands a talented group of character actors in a predictable, scattershot story that’s been cobbled together from a bunch of exhausted cliches and precious little original substance. Based on the bestselling novel by Ann Patchett that was inspired in part by the real life, months long Túpac Amaru hostage crisis at a Japanese Embassy in Peru that started in December 1996, Bel Canto trades what could have been stimulating and exciting for simplistic emotional gains and familiarity so brazen that the actors might as well be reading plot points from a checklist.

Japanese industrialist Katsumi Hosokawa (Ken Watanabe) has been invited to a lavish party hosted by the president of an undefined, impoverished South American country. The country’s leader hopes that the billionaire will place his next factory there, but Katsumi has no such plans. The businessman is only attending the soiree because they’ve hired his favourite opera singer to provide a private, intimate performance for a small handful of world dignitaries. The sopranao, Roxanne Coss (Julianne Moore), isn’t particularly thrilled to be there, either, agreeing to the performance only after she was offered too much money to say no. On the evening of Roxanne’s recital, which the president backs out of attending at the last minute, a group of leftist militants storm the compound with eyes on a political coup. When the revolutionaries realize their primary target isn’t there, they take the party guests and compound workers as hostages, demanding the release of all political prisoners (including the wife of the group’s leader) in exchange for the lives of their captives.

Bel Canto, the latest film from director and co-writer Paul Weitz (American Pie, About a Boy, In Good Company), doesn’t waste much time getting to the inciting siege. After only about ten minutes of set-up, hostages have been taken and an all too comfortable groove is settled into immediately. Bel Canto won’t surprise anyone who’s seen more than one film revolving around any sort of lengthy stand-off. There’ll be heated, overwritten discussions between a gruff hostage negotiator (Sebastian Koch) and the ideologically opposed militant leader (Tenoch Huerta). Some of the hostages will prove to be more high maintenance than others (exemplified by Christopher Lambert’s bougie French dignitary). Not all of the hostage takers will be single minded monsters. A sense of Stockholm Syndrome will settle in as the weeks pass by (or at least I think they’re weeks, since Weitz never establishes any sort of discernable timeline). Understandings will be fostered on both sides, and patiences will be tested all around. If you’ve seen it in a hostage drama before, Weitz will serve you up more of the same in Bel Canto with little deviation.

The idea to hit the ground running as fast as it can gets Bel Canto off to an intriguing start. It’s a tactic commonly employed by filmmakers like Paul Greengrass to establish a sense of fear, shock, and disorientation. Weitz films and stages the opening siege in a nicely suspenseful manner, but from that point onward, he fails to capitalize on the intense nature of the subject at hand, while simultaneously forgetting to double back on many of his characters to provide any interesting depth beyond layering on further cliches. Weitz isn’t interested in the story’s tragic, political, or social underpinnings in the slightest, strangely showing more interest and vibrancy in the film’s tossed off moments of dark humour (observations about mystery meat sandwiches, a plot point about a militant who refuses to leave his treetop lookout position, and a running gag involving a popular telenovela). Most of Bel Canto is comprised of Weitz following various characters around, listening as they espouse trite, lightweight reflections on love, politics, and violence, and then moving on to the next lavishly decorated room for another dull conversation. All he cares about is setting up a pair of limply realized, faux classical romances that are undercut at every turn by Weitz and co-writer Anthony Weintraub’s bog standard hostage movie elements. 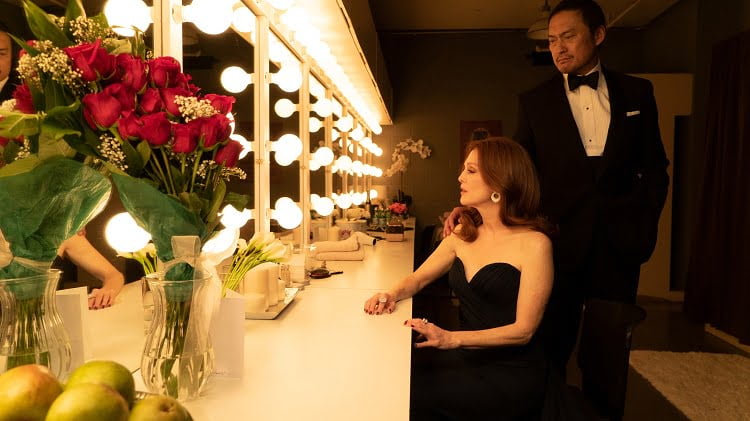 The first romance is the dull, underdeveloped, and obvious one between Moore and Watanabe, and the other, more interesting and moving one belongs to Ryô Kase, as Katsumi’s multilingual translator, and María Mercedes Coroy, portraying one of the more helpful and amenable hostage takers who wants to learn how to read and write. If either of these budding relationships born from tragic circumstances had been given their own films to live, breathe, and thrive, there might’ve been something to them. In Bel Canto, they’re competing not only for screen time against each other, but with every other dangling thread of Weitz’s overstuffed adaptation.

Moore delivers a competent and confident performance (outside of her all too obviously lip-synched performance numbers), but Watanabe’s in so little of the film that few sparks are generated between them. Outside of a finely acted sequence early on where each attempts to take personal blame for the hostage situation, their attraction feels curiously muted. From the opening scenes, Watanabe is framed as the lead and his character as the primary focal point. After the opening thirty minutes, Watanabe might have a total of ten additional minutes of screen time, with Weitz finding more logical uses of Kase and Moore’s characters than his opera loving industrialist. The movie pretty much forgets that Katsumi has set the plot into motion, and around the point of the film where Weitz tries to get Watanabe’s character together with his crush, it all feels hollow since neither of them have been built up as fully fleshed out characters. Moore and Watanabe might be the stars of Bel Canto, but Weitz isn’t doing his leads any favours when it comes to keeping audience investment in their plight front and centre. They do what they can, but what they’re given is so mediocre that there’s no way to elevate the film around them.

The moments when Weitz lackadasically drifts back around to the relationship between Kase and Coroy are the undeniable high points of Bel Canto. While we still don’t know very much about either of them as people outside of this heightened situation, the actors are careful enough (and admittedly young enough) to generate a lot of empathy for their potentially doomed union. They’re given the C-story, slotted just behind the overall hostage drama and the Moore/Watanabe romance, but they’re also the only actors given a semi-original plot to play around with. These are compelling characters with an interesting story stranded within a confused and slowly sinking film.

Like most real life hostage situations, Bel Canto ends before one even senses that an resolution is on the horizon, but here Weitz choose his sudden climax to mount the worst visual parallel yet to the operatic leanings of one of his main characters. The denouement to Bel Canto is so ineffectively over-the-top and aggrandizing that it’s almost unintentionally hilarious. It hasn’t earned a single ounce of the theatricality being employed here. Maybe if the characters had been a bit more detailed and their problems more original and thought provoking, Bel Canto would have gone out with some degree of emotional investment, not a bunch of hokey, cynical pandering.

None of the action in Bel Canto is developed well enough to thrill. None of the romance is developed enough to be memorable, coming across more as distractions designed to mask a floundering potboiler than anything genuine. Worst of all, Bel Canto never appears to be building to anything greater than obvious and basic. Weitz’s film is transparent and oblivious from the second the inciting incident happens, with the early momentum flagging considerably throughout, thanks to an adherence to tiresome storytelling tropes and few ideas as to how to make these beats work effectively. At this point in such a review, I’d normally make some pithy metaphor about Bel Canto coming across like a lacklustre musical performance, but after having watched the film, I’ve reached the absolute limit of cliches that I can handle.

Bel Canto opens in Toronto, Winnipeg, Edmonton, Saskatoon, and Kelowna on Friday, October 26, 2018. It expands to Vancouver on November 1, Calgary, Halifax, and Regina on November 2, and to Ottawa on November 9.

Check out the trailer for Bel Canto: