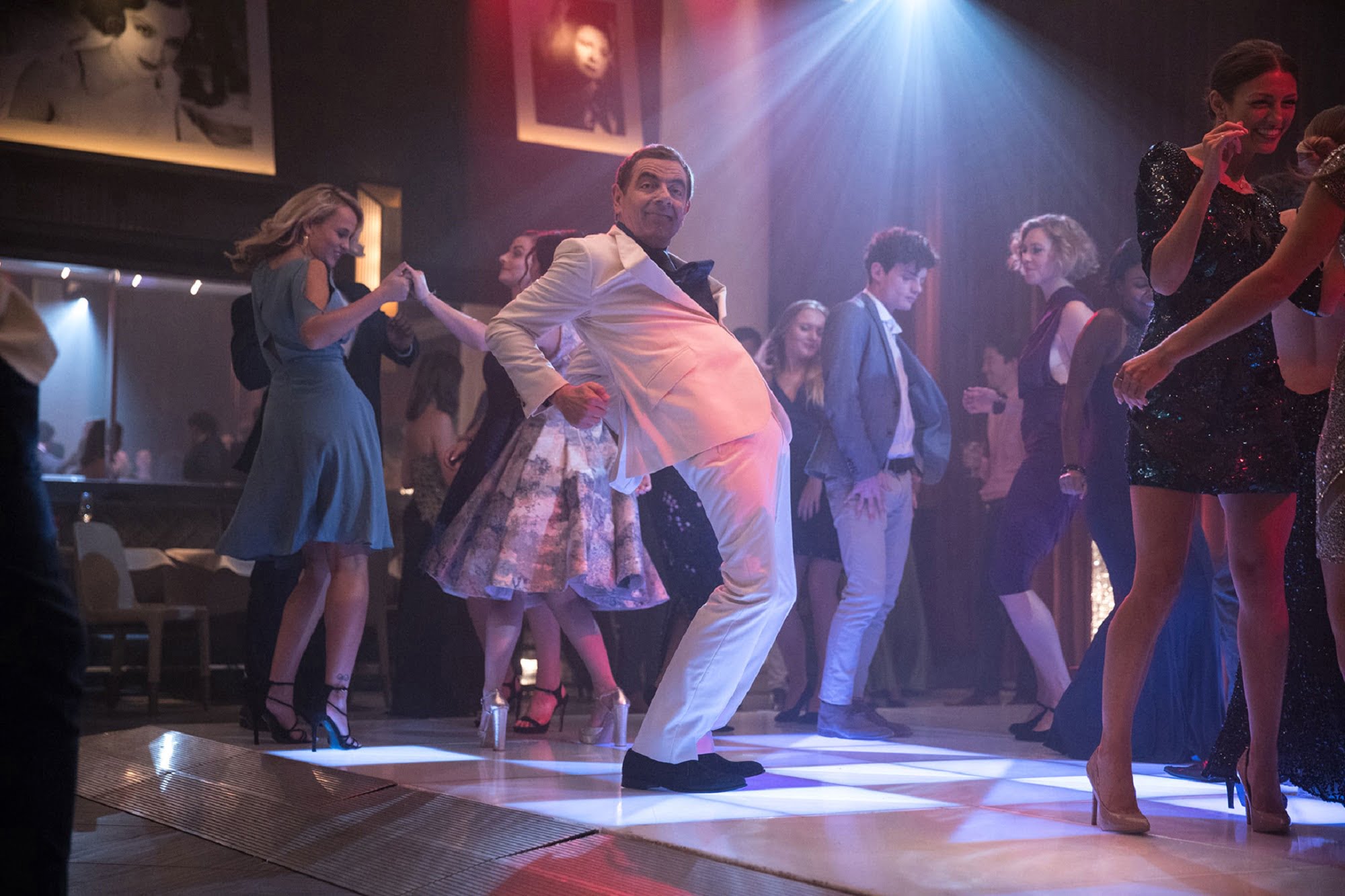 Strained, laboured, and drenched in buckets of its own flop sweat, Johnny English Strikes Again is an almost offensively awful and dispiritingly cynical sequel that few people (outside of Europe) wanted and even fewer still asked for. The first film to feature acclaimed comic performer Rowan Atkinson’s bumbling spy was a sizable hit in the UK, a modest success in North America, and even bigger across central Europe. It’s sequel, Johnny English Reborn, found diminishing returns in its native country, the U.S., and Canada, but it continued to do well across Europe. Johnny English Strikes Again has already made close to $100 million since its overseas release earlier this month – with most of that coming again from the European interior – so nothing that I really have to say about it will change its status as a lowbrow, head scratching success. I will, however, state unequivocally and for the record that it’s a terrible and painfully unfunny piece of cinematic garbage that suggests Atkinson and everyone else involved should’ve left this ineffective franchise off the grid for good.

A cyberterrorist has hacked into MI7 and revealed the identities of all of its foreign and domestic operatives, leaving the Prime Minister (Emma Thompson) furious and flummoxed on the eve of a major G-12 summit. Unable to turn to any of their currently burned operatives, the British government is forced into looking at retired agents whose identities haven’t been compromised to lead the investigation. Their only option that isn’t elderly is, you guessed it, Johnny English, who’s been working at a geography teacher at a posh boarding school (but he mostly just teaches his kids a bunch of dangerous tradecraft, which should be funny, but isn’t). Johnny reunites with his eager, constantly put upon assistant (Ben Miller), and the analog adhering English traces the source of the attacks (purely by luck and never by instinct) to Jason Volter (Jake Lacy), an American tech billionaire who’s about to be granted a major government contract by the PM.

I’ve seen the two previous Johnny English films. I actually had to review both of them. I don’t remember a single thing about them. Before heading into Johnny English Strikes Again, I looked back on my previous thoughts. None of the things I wrote about rang any bells, and hopefully the space in my brain once occupied by even fleeting memories of this franchise has been replaced by useful skills or at least some fun bits of trivia. If I believe what I wrote several years ago about the first two entries, they were apparently lightweight, forgettable, but not altogether loathsome movies. I’ll probably forget the specifics of Johnny English Strikes Again before I’m even finished writing this review of it, but what I won’t forget is this entry’s complete and depressing lack of any sort of comedic energy or originality. There isn’t a single laugh to be found. There isn’t even a single smile to be had. It’s a film that reeks of obligation and dangled paycheques.

Johnny refuses a mobile phone! Ha! He’s offered his choice of hybrids as a company car, and opts for a gas guzzling Alfa Romeo that’s going to run out of petrol at the most inopportune of times! Brilliant! He’s read aloud a disclaimer about the dangers of firearms before being issued a gun by some nerd! Jokes, mate, jokes! He still thinks all women should be cooks and secretaries! Too much! Please, stop, my sides! He goes undercover with a hilariously fake French accent as a waiter! Oh, man, vive le France, mate, am I right? Aren’t millennials and their forward thinking modern world hilarious? I mean, what even IS a phone, am I right? And furthermore, what’s this sarcasm that the kids use these days? I don’t seem to get out much anymore between the re-runs of Mrs. Brown’s Boys.

Johnny English Strikes Again is a Brexit lover’s dream comedy. It’s heavily implied that Atkinson’s doofus superspy would be preferable to any modern methods of thinking. Returning screenwriter William Davies (who worked on the previous entries, as well as “classics” like Stop or My Mom Will Shoot!, Dr. Jekyll and Mrs. Hyde, and Ghost in the Machine) really seems to be going out of his way to sympathize with Johnny’s archaic, inept mannerisms and staunch belief that doing the same ineffective things in the same ineffective ways is the only way of maintaining identity. Johnny’s put in opposition to a villain that seems to be a cross between Mark Zuckerberg and a serial killer, which is actually nicely played by Lacy in the only standout performance here, and I can only assume that this is how most tech-fearing old people view progress. Sure, it’s admirable to show the effectiveness of tried and true methods, but it’s another thing to throw a blanket over new ways of thinking and say that all of them are inherently awful. 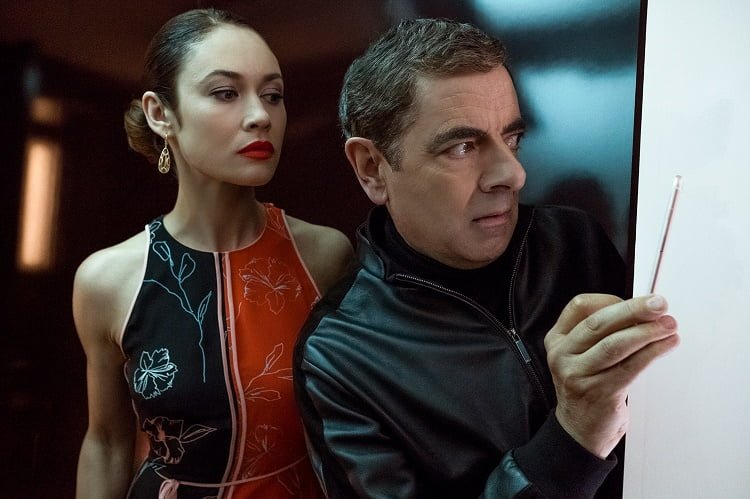 The Johnny English franchise was always a tame and weak riff on spy movies. They make the Austin Powers series seem like a hardcore XXX throwdown in comparison. And yet, Davies and veteran television director David Kerr can’t grasp one of the most simple rules about comedy: if something didn’t work like gangbusters the first time, it will only become unbearably annoying the third or fourth time the same ideas are attempted. Davies and Kerr can’t be arsed to come up with anything original or novel, and rely heavily on an aging Atkinson to bail them out of every inescapable corner. All Atkinson can do is make some funny faces, dance around like a buffoon, and deliver unfunny quips in the character’s snooty, nasally cadence. He can’t save this thing, and I’m not sure he’s even giving his all to try. Even when English dances the night away after accidentally ingesting pep pills (which were right next to the sleeping pills! Hilarious!), Atkinson seems rightfully exhausted and barely interested in his own antics.

It doesn’t help that the stodgy “get off my lawn” brand of humour espoused by Johnny English Strikes Again frames its hero not as a likable, but bumbling defender of Queen and Country, but as a complete asshole. There isn’t a single person in Johnny’s life that he doesn’t find a way to insult, degrade, or put down, and yet, everyone seems drawn to him like an abusive relationship. Some of the things Johnny says are so intolerably unfunny – in any sort of narrative context – that the people who stick with the dimwitted Brit have to be worse off than the hero. No one is realistically written here, and if the jokes aren’t funny, that’s one fewer thing to latch onto. Johnny, by nature, can never admit when he’s in the wrong, but here we’re asked to see his shenanigans as charming, not idiotic. If you like rooting for a hero who goes on a VR assisted rampage that includes shoving an elderly woman in a wheelchair into traffic or literally throwing an unassuming tour guide over the side of double decker bus, you still won’t get what you want because the execution of such delusional meanness isn’t even amusing in its execution. He’s too abrasive to be likable, and devoid of any shred of humanity that would make him worth following. Any character quirks and nuance the Johnny English character once displayed are long since forgotten about by this point.

Johnny English Strikes Again is top to bottom incompetent, but probably because no one involved here cares about delivering a quality movie and not because the people involved don’t know what they’re doing. Every sequence is ugly, underlit, and boasts dreadfully unconvincing colour correction or CGI. The supporting cast, save for Lacy who’s trying his best, all look like they need to shout all their lines to keep from falling asleep, especially Thompson who I don’t think is making a joke when her world leader makes cracks about needing to drink heavily to forget her woes. It’s edited together with a “who honestly gives a shit” sensibility where scenes just crash into one another; one pointless sequence that’s built around a single unfunny gag ends, and then it goes right into the next one. I try very hard to not totally trash films that I don’t like, and I go the extra mile to seek out anything worth praising. Outside of Lacy and a clever (but still not funny) sight gag involving magnetic boots and kitchen utensils, I have absolutely nothing to work with here in terms of crafting any positive spin.

Johnny English Strikes Again is one of those awful movies that can be summed up the best by describing one of its most dire scenes. While undercover as a waiter at a posh restaurant, Johnny attempts to flambe a bunch of prawns tableside. He botches it, and then spends an unnecessarily long amount of time stomping out the horrified diner’s food. Johnny scrapes the food off the deck and serves it to the customer with a beaming smile as if nothing were wrong. That’s a good visual metaphor for how Johnny English Strikes Again perceives its audience. The real kicker, however, comes after the incident. Johnny and his right hand man walk away from the restaurant, neglecting to put out one of the flaming, alcohol soaked shrimps. In the background, all you hear is the sounds of flames and horrified screams. That background action is what it feels like being in a cinema where Johnny English Strikes Again is playing.

Check out the trailer for Johnny English Strikes Again: