Review: Can You Ever Forgive Me?

Based on the true story of one of the strangest forgery and fraud cases to involve a semi-famous person in American history, director Marielle Heller’s dark comedy Can You Ever Forgive Me? gives actress Melissa McCarthy the best role of her career. Physically disappearing into the skin of one of the literary world’s greatest fraudsters, McCarthy anchors this distinctive character study and look into a fixed point in time and a specific place in the world where a very peculiar sort of deception could have taken place. It’s a multilayered film, and most of those details come from the main character, making McCarthy’s performance all the more remarkable upon reflection.

Can You Ever Forgive Me? takes its name not only from the memoir of the film’s real life subject, but also from a letter purported to have been written by titanic wit Dorothy Parker to an acquaintance. Although the letter sounded exactly like something Parker would’ve written and it seemed authentic on the typewritten page, it was actually a forgery sold and created by author Lee Israel (McCarthy). A biographer who wrote several modest bestsellers about the likes of Katherine Hepburn and Estee Lauder, Israel watched her stock and standing in the New York City literary world slide and tumble heading into the early 1990s. Her latest book on vaudeville superstar Fanny Brice isn’t generating much interest with her agent (Jane Curtin), and her previously comfortable life is heading deeper into debt and despair. A chance discovery of some correspondence tucked away into a volume at a rare book library leads Lee into realizing that there’s a lot of money to be made in literary collectables. To make ends meet, Lee begins forging carefully worded and falsely aged correspondences and memos from any number of famous people. Initially, her plan is an unqualified success, but once rare book and autograph dealers start getting suspicious of Israel’s questionably large library of famous letters and the police start investigating, Lee enlists the help of her favourite drinking buddy, Jack Hock (Richard E. Grant), a gay, homeless, equally burnt out bon vivant who’ll do basically anything as long there’s a drink and few bucks to be made at the end of it.

Israel’s case is fascinating because it happens at a very culturally specific point in time. Lee was able to get away with her fraud for so long because there weren’t any computerized tests or stringent guidelines for authenticity that were in place to stop people like her from grifting everyday collectors out of hundreds of dollars at a time. Lee was careful to only forge documents from people who wrote on typewriters. That way, as long as she could buy the same typewriter a given author used, she’d only have to worry about holding her fake letter up to a light source to forge a signature. The dealers she targeted usually only gave her work a passing glance before forking over a bunch of cash, more taken by the contents of the letter and less about the provenance. The story of Lee Israel’s disreputable side career and fall from grace as depicted in Heller’s film could’ve only taken place in a city as big as New York – where someone like Israel could’ve easily hidden in plain sight – and most easily in the pre-Internet era. The period detail in the film is absolutely spot on and enhances the look and feel of everyone within it.

Heller (The Diary of a Teenage Girl) revels into these cultural details and leans into them heavily when showcasing the sort of literary circles she ran within. Every bookstore, pub, and restaurant Israel frequents in the film gives off the same vibe of old school wealth in decline. One can practically smell the dusty books, fading newsprint, the standing water of a chilly New York winter, and last whiffs of aging mahogany tables through Heller’s exceptional design and camera team, but whenever we’re in the presence of Lee Israel, there’s also a touch of cat piss and self loathing body odor. Heller dresses and presents Lee Israel as one of the main reasons such high societal and previously refined trappings were doomed to fade into obsolescence. While Heller and screenwriters Jeff Whitty and Nicole Holofcener never outright demonize Israel for her obvious depression and self-sabotage, they do a delicate and thoughtful job of recontextualizing her controversial status as a product of her time. Her crimes weren’t victimless, and Israel was never actually a victim of anything greater than writer’s block and chronic depression, but the film shows how the passage of one era into the next can take its toll on creative types. There’s never a sense that Israel was overly greedy in her aims, but rather that it was that difficult for her to keep her head above water and still feel good about herself. At its heart, Can You Ever Forgive Me? isn’t a true crime story or caper comedy in any sort of traditional sense. It’s more like a survival tale brimming with some of the darkest comedy possible. 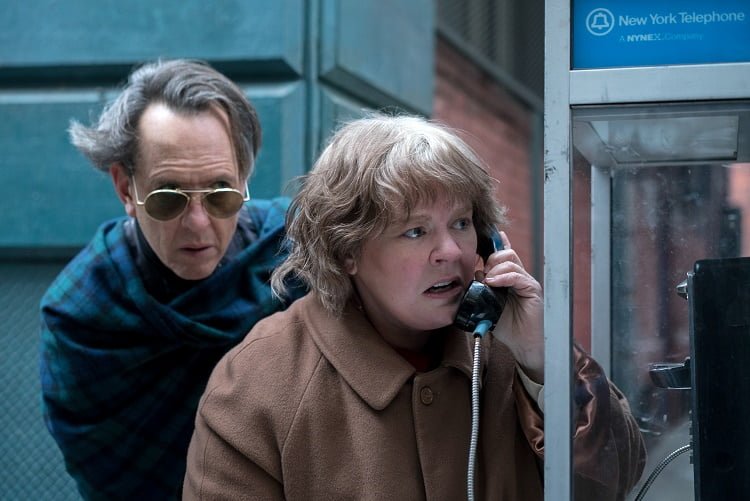 It’s frankly astounding that no one has thought to cast McCarthy as a surly, cocky, hard drinking, foul mouthed writer before Can You Ever Forgive Me?. It’s practically the part she was born to play. Putting her unparalleled ability at making curse words sing to perfect use, Israel represents a flawless picture of a classic McCarthy character. She’s always excelled at playing sarcastic, quick witted slobs, but here McCarthy is given a character with a wealth of talent and a palpable amount of sadness to temper any harsh notions viewers might have about the character. McCarthy, whose appearance here is decidedly unglamorous, doesn’t want the viewer to excuse Lee Israel, but to foster a greater sense of understanding. Israel wasn’t exactly noted for being a warm and welcoming person, but Heller and McCarthy work well together in finding ways to make viewers figure out what led her down such a desperate road. Even if Israel can’t morally rationalize her own behaviours, McCarthy always finds subtle ways of making sure the viewer can figure out what makes her tick.

McCarthy also finds one of her best scene partners ever in Grant, and one could be excused for assuming that their chemistry suggests they’ve been working as a tandem act their entire careers. Both characters are equally smug and aggrandizing in their own way, but Grant’s boozy effervescence plays perfectly against McCarthy’s penchant for surliness. When their partnership takes a serious turn late in the film, both take their performances to even higher levels that their comedic chops might’ve suggested. Their jocular chemistry gives way to something a lot more complex and poignant in the film’s latter stages, and Can You Ever Forgive Me? goes out on one of the more dramatically engaging notes of the year. While Heller directs and frames everything exceptionally well, the film ultimately belongs to the assured and meticulous performances of McCarthy and Grant.

It’s doubtful that most viewers will look back on Israel’s transgressions fondly, but they might be able to do what the title asks of them. Can You Ever Forgive Me? is a crime story where none of the crooks are abject monsters, the targets are wealthy people who can afford frivolous and frankly useless collectables, and the person at the heart of it all is clearly going through pronounced emotional turmoil with nowhere else to turn to outside of a fellow alcoholic. And yet, Can You Ever Forgive Me? will remain funny and relatable in its most humane moments thanks to its keen observation of human nature and our search for comfort. It sounds like a lot to take in, and it is. Most of the brilliance of Can You Ever Forgive Me? won’t hit viewers until long after the movie has ended.

Can You Ever Forgive Me? opens exclusively in Toronto on Friday, October 23, 2018. It expands to Vancouver on November 2, Calgary, Edmonton, and Ottawa on November 9, and Halifax, Victoria, and Winnipeg on November 16.

Check out the trailer for Can You Ever Forgive Me?: