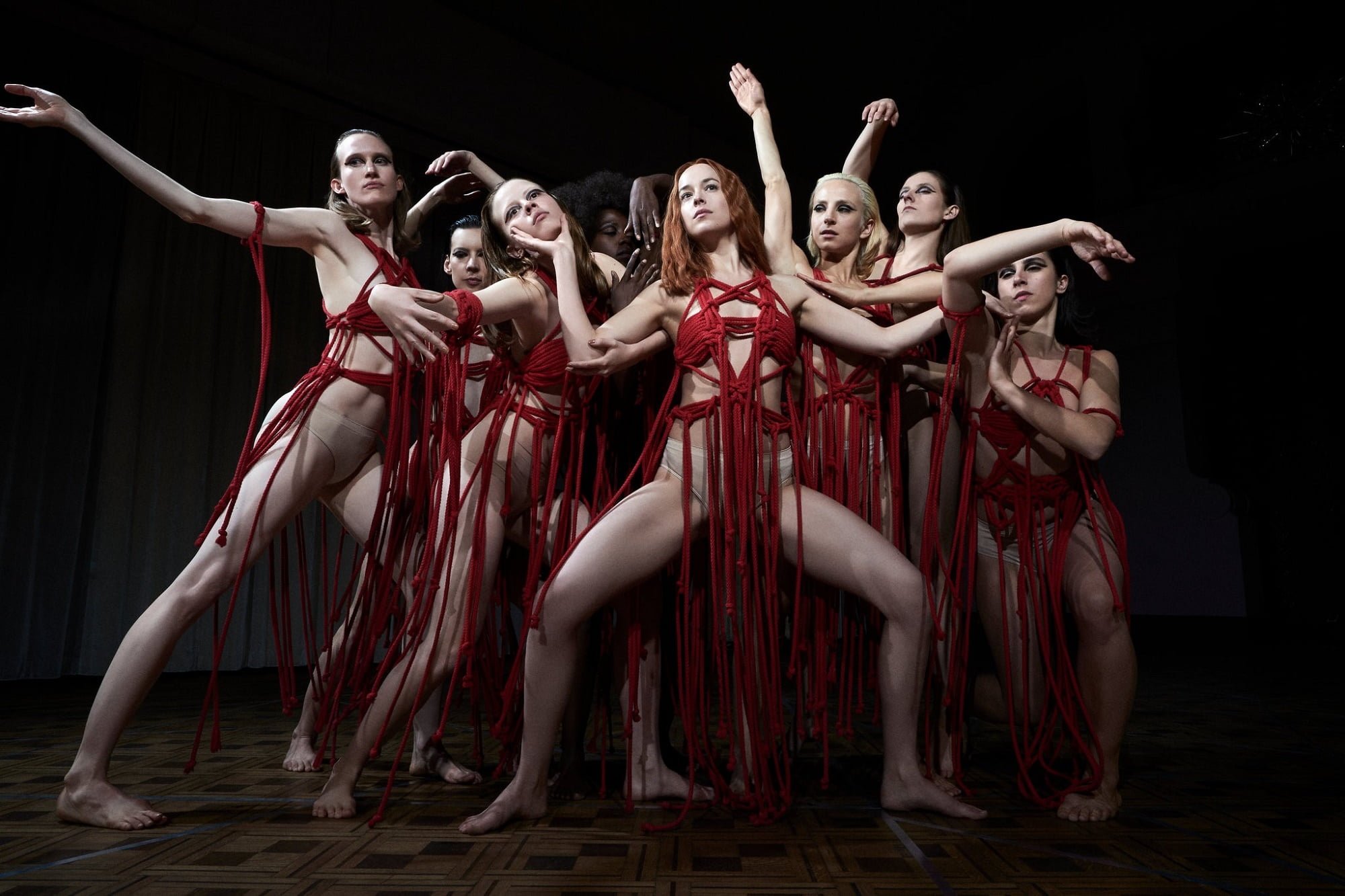 Artistically and thematically indulgent to the point of becoming top-heavy and ponderous, award winning filmmaker Luca Guadagnino’s alternatingly loose and constricting reworking of Dario Argento’s horror thriller Suspiria is one of the most interesting, and least entertaining misfires of recent memory. A film that tries exceptionally hard to accomplish way too much, Suspiria is a truly go-for-broke bit of filmmaking in both positive and negative ways. It’s the kind of films that feels so uncompromised that it gleefully dabbles in the anarchic, but at the same time it’s built around a thin premise that can’t support some of the film’s more purposefully pointed and serious messages. It’s both a silly film that takes refuses to incorporate any actual humour, and a work that contains no less than half a dozen social, sexual, and political parables within its fabric. Argento’s original Suspiria was ambitious in its own campy and unnerving ways, but Guadagnino’s unbearably long and all-over-the-map retooling carries enough ambition to fill ten movies. Some of the time it pays off. Most of the time, however, it’s all rather monotonous.

Following a title card stating that the audience is about to sit through “six acts and an epilogue set in divided Berlin,” Guadagnino’s Suspiria opens in 1977 as a young woman (Chloë Grace Moretz) is frantically attempting to run away from a prestigious ballet company. She barges into the office of her therapist, Dr. Josef Klemperer (Tilda Swinton, completely unrecognizable in the first of three roles she plays), and claims that the female instructors at the school are up to something insidious and otherworldly. She says she fears for her safety and the well being of her friends Olga (Elena Fokina) and Sara (Mia Goth) before disappearing seemingly without a trace. While Klemperer begins his own investigation into the whereabouts of his patient, the instructors and students of the Markos Dance Academy have to find a new way to proceed with their next major production now that they’ve had one lead disappear and another flame out spectacularly. Enter Susie Bannion (Dakota Johnson), a midwestern American who’ll stop at nothing to secure a spot at the Academy. Displaying an unusually high level of talent for an admittedly self-taught novice, Susie catches the eye of Madame Blanc (Swinton, again), the company’s most fickle and enigmatic instructor. Immediately, Susie is thrust into the centre of the ballet’s latest masterwork, but the cost of such a spotlight isn’t immediately apparent to the young woman (or to the instructors that put her there).

If I were to try and outline all of the overlapping allusions Guadagnino and screenwriter David Kajganich (who previously collaborated on the much more successful and entertaining A Bigger Splash) contained within Suspiria in any visual way, it would probably look like that internet meme that sprung from an episode of television’s It’s Always Sunny in Philadelphia where Charlie Day’s increasingly twitchy mailroom drone tries to uncover the identity of a mysterious, unknown worker by using a lot of connecting string and smoking a bunch of cigarettes. The sheer amount of subtext contained within Suspiria will leave viewers more breathless than the plot. Guadagnino and Kajganich have a lot to say about fascism, post-war fears, the German reconstruction, feminism, the latent and toxic masculinity of old people, the way the entertainment industry thrives on the literal blood of young people, the sacrifices people make to realize seemingly unattainable dreams, the lengths that aging professionals will go to in order to maintain their status and position, the decline of capitalism, and probably five or six other things that aren’t springing to mind. It’s all a bit much, and there’s no way Guadagnino could ever hope to contain it all, but it’s grafted onto the framework of pre-existing film that was purposefully a bit much to begin with.

By maintaining the general idea and some of the style of Argento’s original Suspiria, Guadagnino creates a film where anything could happen on a visual level, even when over half of the film’s scenes are so obviously metaphorical that one can practically see the director standing on a soapbox in the corner. Taken as individual moments, Guadagnino’s set pieces are stunning, especially a sequence where dancers in different rooms of the academy influence each other’s “performances” and the spectacularly gruesome, nightmarish, and admirably indecipherable climactic freak-out. There are no small amount of fine details that make Suspiria into a visual splendour, even when the rest of the film sounds like trying to listen to a marathoner trying to recite War and Peace while running in a race. 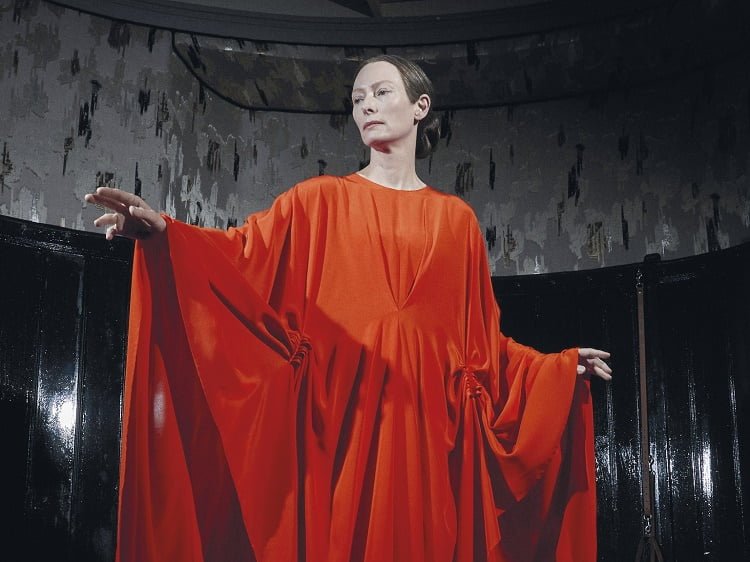 Guadagnino and Thai cinematographer Sayombhu Mukdeeprom utilize Argento’s love of spinning movements, mirror imaging, and whip-pans to great effect, and the film’s dingy, drab colour palette helps to bring such hyperkinetic flourishes into a more realistic light. Guadagnino employs Thom Yorke to provide Suspiria with a nicely percussive score that matches the action rather nicely (even if it isn’t as memorable as some of the film work done by fellow Radiohead member Jonny Greenwood). There’s an adherence to natural lighting whenever possible (except, most obviously,for the finale), and it draws a lot of attention to the movement of the dancers and actors within their spaces. It’s not frantically edited or in much of a hurry to get anywhere, which runs counter to how the script has been written, but such a touch proves to be the only thing keeping the film stable on the whole. It looks convincingly like a late 70s, post-war period piece, right down to an on screen act-break font that favourably compares to the typeface often seen in the pages of decaying, tawdry paperback novels. Visually, Guadagnino’s greatest accomplishment is the setting of a singular mood upon which to build various other emotional outbursts. Even when the rest of the film is wildly inconsistent, the stylish flourishes provide a grounding, unifying force to untethered material.

Similarly, Guadagnino finds himself once again working with like minded primary collaborators in Swinton and Johnson, who mostly recreate the subtly malevolent chemistry they had opposite one another in A Bigger Splash. Johnson fares much better here, and delivers her most captivating performance to date. It’s never certain whether Susie knows more about the company than she’s letting on, and the character’s wait-and-see approach to everything makes Johnson a wonderful surrogate for the adventurous viewer. As for Swinton, she’s fine in all three of her roles, but she’s also succumbing to the same kind of excess that Guadagnino finds himself stumbling over. Her ballet instructor is mushy and ill defined. Her turn as a male psychoanalyst is transformative and dramatically sound, but never strikes as anything more than a masterful magician smirking as they pull off a complicated trick. And her third role, which I won’t spoil, is really out of left field and comes so late in an already exhausting film film that Swinton’s over the top nature barely registers.

Swinton’s triple-billing pretty much sums up all of Suspiria’s problems: it’s so resolutely focused at throwing all that it has at its disposal on screen all of the time that it loses any sense of artful objectivity. There are so many ideas, themes, and motifs competing for screen time throughout Suspiria that almost halfway through a two and a half hour film I stopped caring about any of them. It was nice of Guadagnino to include so much, but none of his dissimilar arcs build to anything cogent. It’s like unravelling a knotty ball of yarn only to realize the ball was made up of nothing but errant threads, some of them longer and more useful than others. Maybe if Suspiria had stuck to two or three more pronounced and well defined threads, there wouldn’t be such a disappointing overall feeling to Guadagnino’s latest. By the time the violent acts start ramping up in intensity, the film has ceased to feel any more suspenseful, and instead these beats start to bring on a sense of relief that the film might almost be over. Once the viewer is well aware of the dark aims of the ballet school, the revelation feels like a poor attempt to place a cap on every dangling bit of subtext, and ultimately none of it comes across as entertaining, engaging, or intellectually stimulating. It’s a lot of exquisite sound and visual fury signifying so much at once that it might as well be nothing.

Guadagnino’s take on Suspiria lacks any semblance of humour or playfulness, making it an absolute chore to sit through unless you’re predisposed to adore cinematic formalism. It takes all of its elements so seriously that it never stops to question if such grave deliberation is warranted. A film this purposefully uneven and phantasmagorical calls for a much lighter touch, and for all of its positives, Suspiria feels unwelcomely like a film that holds its audience as contemptuous hostages. It’s a work so eager to expand upon its moral superiority and high minded aestheticism that it forgets to slow down and think about what it’s saying. I’m sure its defenders will herald Suspiria as a film that will take multiple viewings before it makes a lick of sense, but I can’t say I’m interested in revisiting this anytime soon.

Suspiria opens in Toronto, Montreal, and Vancouver on Friday, November 2, 2018. It expands to additional cities on November 9.

Check out the trailer for Suspiria: