Review: The Nutcracker and the Four Realms 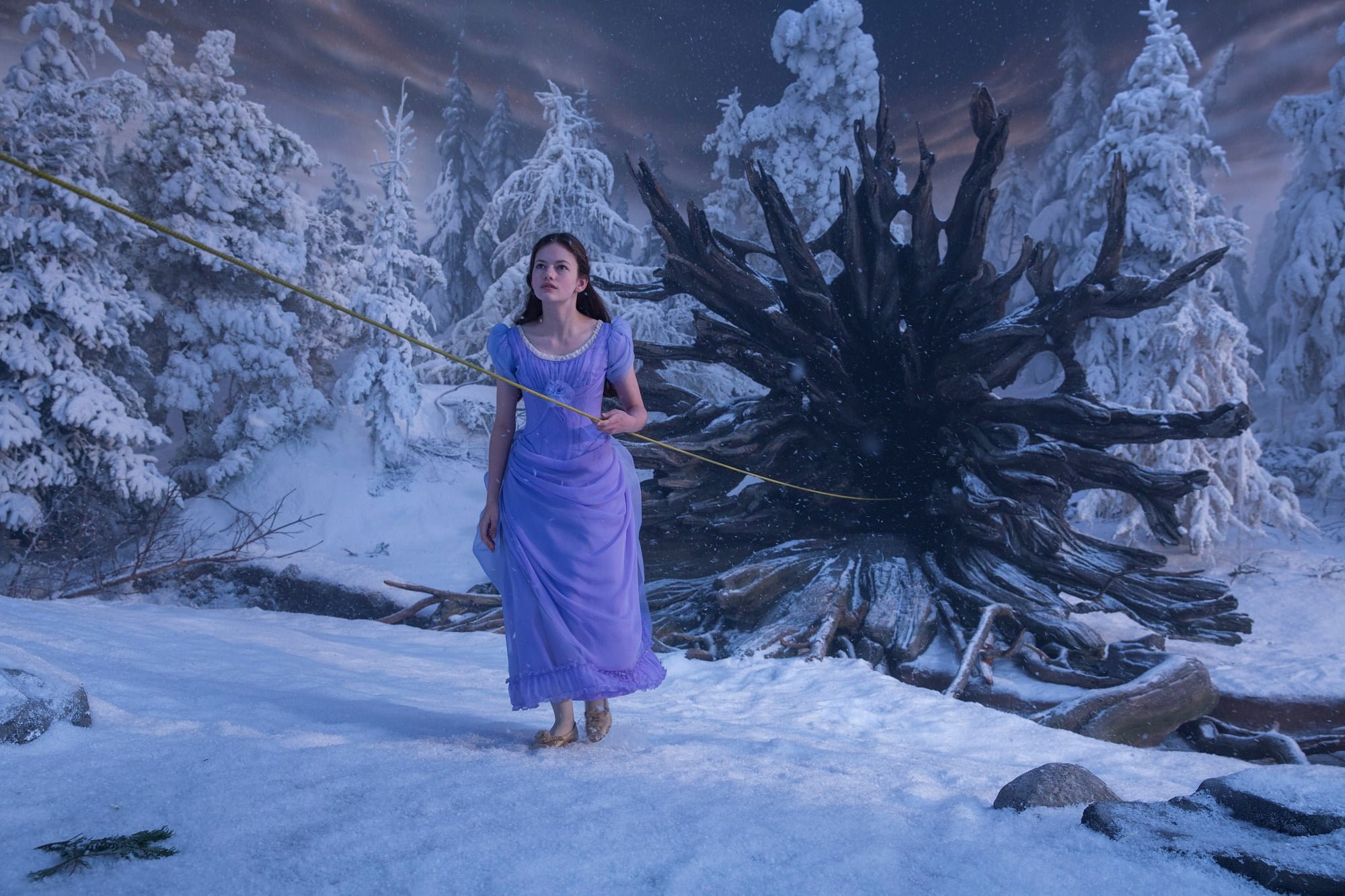 Harmless, lavishly mounted, blandly forgettable and hastily assembled, the holiday trifle The Nutcracker and the Four Realms likely won’t be referred to by anyone as their favourite Christmas movie or adaptation of the titular well trod tale. Boasting a stunningly impressive sense of production design and flashes of innovative visual wonderment, The Nutcracker and the Four Realms bears all the scars of a project that has been tinkered with and trimmed to within an inch of its narrow life. If it wasn’t working in earlier cuts – which is why the film now has two credited directors – it certainly isn’t helped in its truncated, messy final form.

Clara Stahlbaum (Mackenzie Foy), the middle of three children in a London family of means, is still reeling and grieving over the death of her mother, and she’s upset that her father (Matthew Macfayden) and siblings (Tom Sweet as the youngest, Ellie Bamber as the eldest) are prepared to forge ahead with their Christmas celebrations as if nothing’s wrong. On Christmas Eve, Mr. Stahlbaum gives each of his children gifts left behind for them by their mother. Clara is given an ornate looking metal egg that can’t be unlocked without a special and specific key. At a holiday party, she partakes in a string maze to find another gift. The string leads her out of the party and into a magical forest, where she finds the key and immediately has it stolen from her by a mischiveous mouse. Clara is informed by a helpful nutcracker soldier (Jayden Fowora-Knight) that she’s in a magical world made up of four realms that her mother helped to create. There’s the land of snowfall, a land of flowers, a land of sweets, and the dark and spooky land of amusements, run by the reclusive Mother Ginger (Helen Mirren), which has declared war on the other realms. Sugar Plum (Keira Knightley), leader of the land of sweets, tells Clara that the only hope to save their world rests in the young woman’s ability to find the magical key she lost, which will not only open her gift but also operate an “engine” invented by her late mother that can bring inanimate playthings to life and help to raise and army that can defeat Mother Ginger and her predominantly rat and mouse based army once and for all.

As the current story goes, The Nutcracker and the Four Realms started shooting with director Lasse Hallström (The Cider House Rules, Chocolat, What’s Eating Gilbert Grape?) at the helm. After principal photography completed, extensive reshoots were ordered, which Hallström would be unable to complete due to scheduling conflicts. Director Joe Johnston (Jumanji, The Rocketeer, Captain America: The First Avenger) was brought in to direct over thirty days worth of reshoots (which is a lot for any movie, despite reshoots being a common thing). Hallström, whose background is in frequently earnest, crowd pleasing dramas, and Johnston, who tends to work on special effects heavy blockbusters, have sensibilities and visual instincts that mesh remarkably well in the best moments of The Nutcracker and the Four Realms. For the most part, it’s impossible to distinguish where Hallström’s work ends and Johnston’s begins. Their unlikely partnership direction isn’t the biggest problem here.

Neither is the opulent look of the film. Every frame of The Nutcracker and the Four Realms looks like it cost millions of dollars to make, even in throwaway moments that are on screen for a matter of seconds. Every floor tile, support column, wallpaper print, dress frill, snow covered tree, and seemingly inconsequential prop looks like it’s been constructed thoughtfully and carefully. The CGI characters, most notably a hulking, frightening looking monster made up of teeming, undulating mice and Sugar Plum’s tin soldier army are gorgeously rendered and realistic looking rather than cartoonish. The effects make seemingly impossible creations and settings pop with splendid vibrancy. Everyone working on the look and feel of The Nutcracker and the Four Realms deserves all the praise they can get.

So if the film looks like a multimillion dollar fantasy, the two-man directorial team seems to work on some level, and the story has a kernel of a good idea and an overall feel-good vibe, then why does The Nutcracker and the Four Realms end up underwhelming? 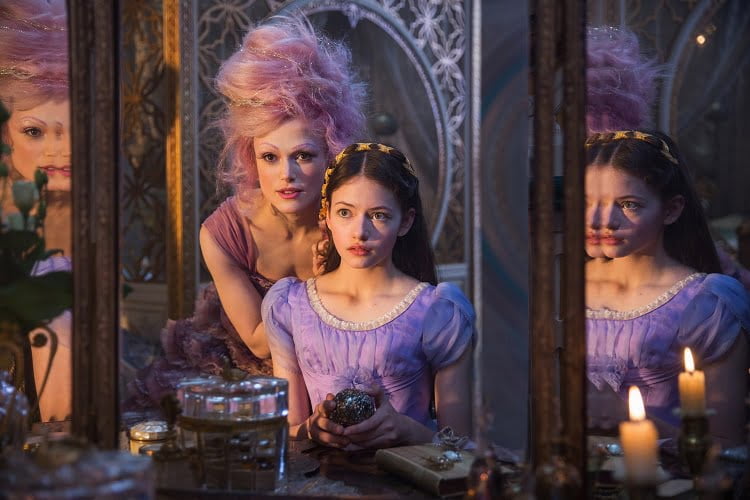 First, the characters aren’t all that interesting, and Foy isn’t a particularly commanding leading presence. The viewer learns all they need to know about Clara in the first ten minutes, and the remaining 80 minutes are comprised of just watching her do stuff and reacting to the wonderment around her. There’s not much development outside of using the experience to better understand her father and conflicted feelings of abandonment. Clara’s a bit of a blank slate, and Foy isn’t seasoned enough of a performer to fill in any of the script’s numerous gaps. She’s fine when asked to look surprised, shocked, or upset, but whenever she’s called upon to be witty, vulnerable, or charming, the results aren’t as strong. She isn’t given much to work with, and the still learning performer can’t figure out what she might be able to add to it.

But if Foy isn’t given much in the way of character development and nuance, the rest of the cast members are almost literally defined solely by their costumes and make-up. The supporting cast of characters are so threadbare that the film makes seasoned pros like Mirren, Richard E. Grant (as the leader of the snowfall realm), and Morgan Freeman (as Clara’s one-eyed inventor godfather) look downright boring. Their physical appearances are strong, but they have barely anything to do. Like Foy, they’re reduced to simply watching events as they happen and reacting accordingly. It’s barely acting at all. The only person rising above the material is Knightley’s Sugar Plum, who’s clearly revelling in the fact that she can put on an outlandishly unsubtle baby-doll voice and vamp it up to the high heavens here. She’s wonderful, Foy tries her best, and everyone else is left to their own devices.

But what really sinks The Nutcracker and the Four Realms to depths beyond the point of no return is that it has been assembled by people who apparently had no faith in the project and have no clue what direction they want to take things in. The whole film starts off by initially moving at a refreshingly brisk clip without missing a step, but things go off the rails and never properly recover as soon as Clare makes her way to the fantasy world, where it becomes painfully obvious that a good chunk of The Nutcracker and the Four Realms was either never filmed, never completed, or is on the cutting room floor somewhere. Just as the film should start becoming fun, the choppiness becomes inexcusable.

At one point, Clara sits down with the leaders of the three good realms to watch a ballet performance that can fill in some of the backstory, which is a clever concept and boasts superlative real life dance talents like Misty Copeland (who gets major billing here for approximately ninety seconds of screen time) and Sergei Polunin. Not only is the beauty of what they’re performing broken up by Knightley’s character annoyingly interjecting to spell out what the dance is telling us for the benefit of people who can’t follow along to ballet numbers, but also curiously intercut with brief, fleeting footage of what the snowfall and flower realms look like. This is all we see of those worlds, and they’re shoehorned illogically into the middle of a dance number, appropos of nothing whatsoever. It’s barely even a film about the nutcracker, who’s nicely played by Knight in an impression making turn, but is mostly handled as a living prop to move the story along. I guess Clara and the Two Realms isn’t that great of a title for a movie, but it’s more appropriate.

From that pivotal moment, The Nutcracker and the Four Realms starts racing towards its obvious twists and humdrum conclusion. That sped up pace happens after the first thirty minutes of the film has ended, and it never looks back. It grows out of control and chaotic, but never intriguing, emotionally stirring, or exciting. There’s no heart or warmth to be found; just a lot of spectacle and visual effects. It’s depressing to behold, especially when one considers how clearly labour intensive the project must’ve been. Every cent of the production budget is up there on the screen, but we can’t see anything worth caring about. It’s the worst kind of well meaning film. It works in front of you, but never works on you. It’s never offensively awful or unbearable to behold, but every second of The Nutcracker and the Four Realms smacks of continually missed opportunities and short-sighted second guesses. It’s a film that’s doomed to be forgotten about by viewers before most towns and cities will have their first significant snowfall and well before the holiday season kicks into high gear. Someday someone involved with the film might be able to explain what went wrong, and that’s a moment I eagerly await.

The Nutcracker and the Four Realms opens in theatres everywhere on Friday, November 2, 2018.

Check out the trailer for The Nutcracker and the Four Realms: