Review: The Girl in the Spider’s Web: A New Dragon Tattoo Story 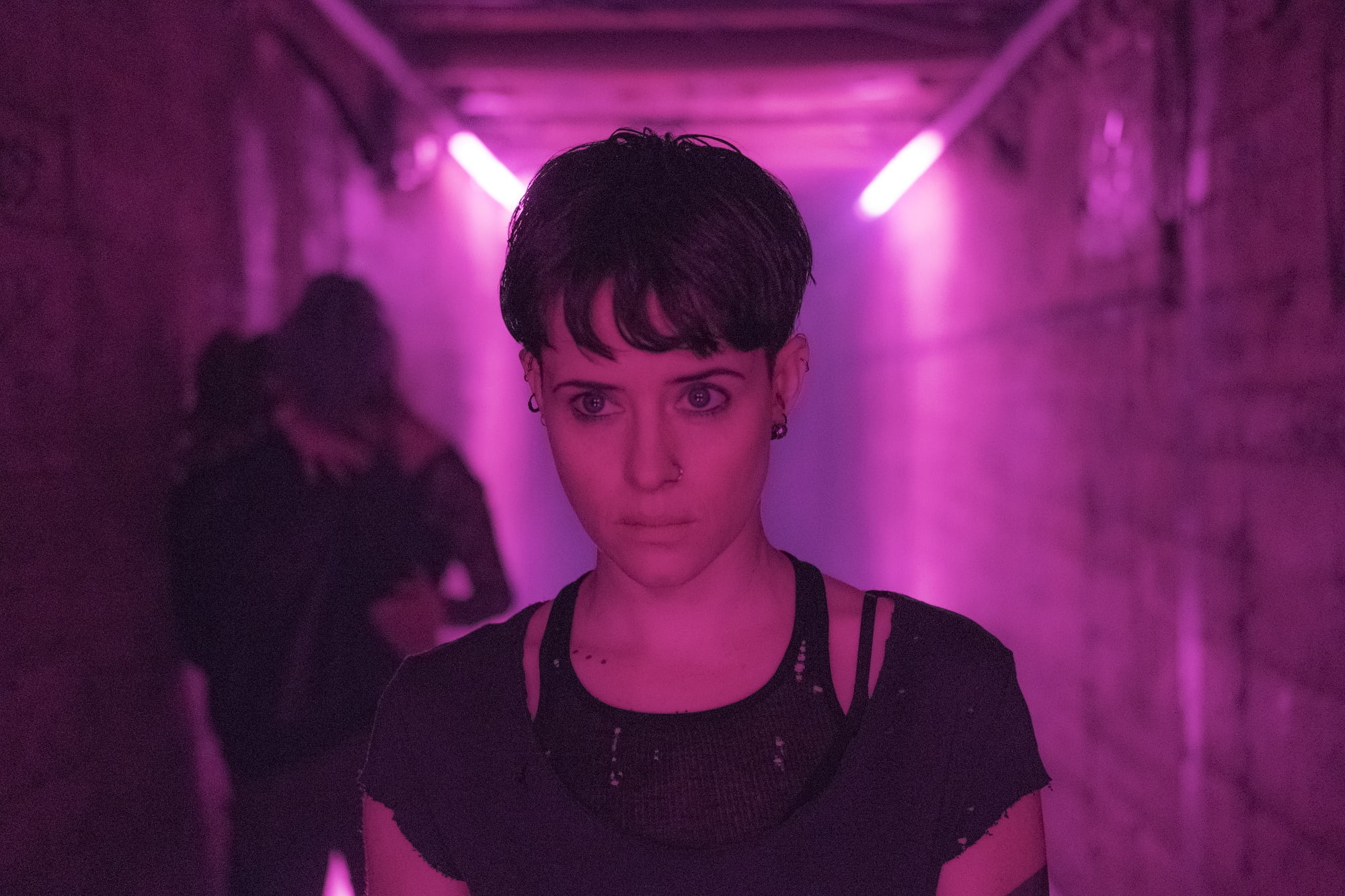 The Girl in the Spider’s Web, which comes saddled with the cumbersome, unnecessary subheading A New Dragon Tattoo Story, acts simultaneously as an entertaining, if admittedly lesser sequel to David Fincher’s previous adaptation of the same literary characters to the big screen a few years back and as a fun, albeit sillier franchise reboot with a different cast from the top down. Leaping over the direct literary sequels from late Swedish novelist Stieg Larsson that would’ve logically followed Fincher’s 2011 film and comprised a trilogy, new director and co-writer Fede Alvarez (Don’t Breathe, the Evil Dead remake) looks for inspiration in the lesser literary reboot from author David Lagercrantz. The result is a bit strange, like unplugging your computer when an error has occurred, and when you go to turn it back on after waiting for a bit, everything has mysteriously changed, but it all works reasonably well so you see no huge reason to complain. That might be faint praise for The Girl in the Spider’s Web, but I’ll take effective, different, and engaging over ponderous, unnecessary, and dull almost every time.

Set approximately three years after the events of The Girl with the Dragon Tattoo, Spider’s Web opens to find enigmatic hacker and all around badass Lisbeth Salander (now played by Claire Foy) operating as an avenging angel of sorts; travelling around and helping women who can’t speak up or defend themselves against their male oppressors and abusers. Out of the blue, she’s contacted for a seemingly impossible hacking gig with massive global implications. A programmer and father working for the Americans (Stephen Merchant) has created a way for all nuclear weapons around the world to be controlled by a single operator, and he understandably has immediate regrets. The people who want to get their hands on the program have targeted him, but the only copy in existence is housed on an NSA supercomputer. Lisbeth is hired to hack into the NSA – drawing the eye of a young operative (Lakeith Stanfield) – and eventually she’s also marked for death, leading her to enlist the help of washed up journalist and estranged former lover Mikael Blomkvist (Sverrir Gudnason). While she somehow expected such a mission to come with a certain degree of danger, there’s no way she could’ve known that the people coming after the data with everything they got are a mysterious criminal organization with ties to Salander’s dark family history.

More in the vein of a spy flick this time than a straight-up mystery or suspense thriller, Alvarez’s The Girl in the Spider’s Web doesn’t waste much time establishing itself as something stylistically similar to Fincher’s film, but narratively removed. Visually, Alvarez and his frequent cinematographer Pedro Luque are doing everything they can to emulate Fincher without openly ripping him off. Perhaps unsurprisingly, The Girl in the Spider’s Web once again makes perfect use of the story’s chilly and snowy Nordic locales and the grittier details of Salander’s modern gothic private life. There’s a slickness to Alvarez’s direction that marries nicely with the sensibilities set out by Fincher (who returns here as a producer), and it still looks and moves better than the Swedish films based on the Larsson’s trilogy.

The action sequences are basic in theory, but elaborate in execution, with Alvarez finding clever ways to realistically and artfully depict sometimes outlandish moments like Lisbeth attempting to outrun an explosion, Stanfield frantically running from one end of his office to the other, and a woozy-wobbly bit where the heroine attempts to pull herself up and get out of harm’s way after being drugged. The situations Salander is put into by writers Alvarez, Jay Basu, and Steven Knight are far more ridiculous and implausible in The Girl in the Spider’s Web (like watching Lisbeth escape capture by driving her Ducati over a frozen river or a shootout on a drawbridge that make no logistical or logical sense whatsoever), but the director finds nifty ways of making sure this somewhat goofier story comes to life nicely on screen. 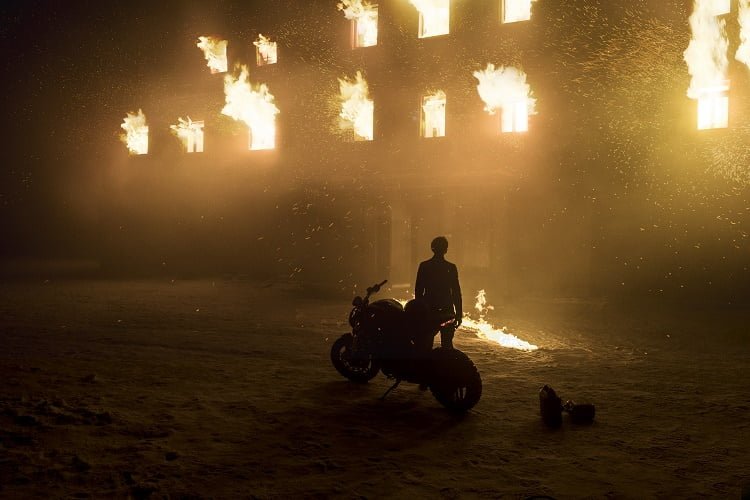 If one of the things you liked best about Fincher’s The Girl with the Dragon Tattoo was the filmmaker’s serious handling of pulpy, popular fiction, you’ll find little of that in Alvarez’s take. If you wanted to see Lisbeth Salander portrayed as a strong, competent, and capable action hero (who still makes a few idiotic mistakes that seem out of character, but are necessary to keep the plot moving forward), The Girl in the Spider’s Web has a considerable amount of charm. Eventually the story devolves into one of the biggest overarching cliches in cinematic history when Lisbeth has to protect a precocious and prodigal young child (Christopher Convery) with the assist of a small, but dedicated hacker task force dedicated to helping her stop the world from potential nuclear annihilation, but even that detour in a vastly different direction from approaches to the material that came before isn’t distracting if one thinks about it. Salander and Blomkvist (who’s fully and completely relegated to almost useless sidekick status here) operate in a heightened world where weird and dangerous things seem to befall the characters with distressing and admittedly cheesy regularity. If The Girl with the Dragon Tattoo was an attempt to turn Larsson’s works into a form of respectable art, then The Girl in the Spider’s Web is a wholehearted embrace of the dubious roots that made the bestselling series so entertaining for millions of readers around the world. It’s hard not to fault such an approach because it feels natural and organic.

Foy acclimates herself well to the physical tasks handed to her by Alvarez, and nicely emulates the bi-and-hypersexual Salander’s anti-social and distancing behaviours while letting in a bit more warmth than Noomi Rapace and Rooney Mara did with the character. It’s a less enigmatic take on Salander, but Foy has crafted her performance here in the image of the material she’s been given and shows little influence from past incarnations of the character, which is a refreshing approach. Alvarez gives her plenty of great performers to play off of, too, stacking the cast with notable character actors more than capable of making considerable impressions on their own.

Merchant showcases a degree of sympathy and sadness that’s disarming to see from the usually comedic performer, making the most of a relatively mediocre role. Stanfield, who’s been a star in the making for quite some time now, gets to flex his abilities to play an action hero and a wiseass as the government agent in direct opposition to Lisbeth, and he looks like he’s having a blast performing surveillance missions, hurriedly trying to stop ticking countdowns, and firing comically enormous sniper rifles. Stanfield also gets to share a fair number of scenes opposite Synnøve Macody Lund as a suspicious Swedish secret service agent who wants the American out of her country, and their interplay is one of the film’s more inspired and playful touches. Similarly embracing the chance to play against type is Claes Bang, who, in a role lightyears away from the one he played in The Square last year, portrays a hulking, unstoppable killing machine here. Almost everyone gets something of substance to do except for Gudnason and a dreadfully misused Vicky Krieps as a fellow journalist with eyes for Blomkvist. The movie would almost be better off without them.

Some might balk at the notion of turning Lisbeth Salander into a full on avenging angel or superhero, but Alvarez makes such a notion a welcome one. Even though the film’s big reveal can be guessed from the opening sequence and nothing about The Girl in the Spider’s Web is particularly shocking, the film remains a solid piece of entertainment delivered by steady hands. No one will ever confuse The Girl in the Spider’s Web for high art, and I for one am okay with it. Taken on its own merits as a sometimes ridiculous, but fleet-footed spy thriller, Alvarez’s take on the material works just fine. It might not be enough for Fincher devotees to shake, but I’m sure average ticket buyers and anyone who thought the last film based on a Larsson novel was just a silly story in prestige movie trappings will be able to enjoy The Girl in the Spider’s Web just fine.

The Girl in the Spider’s Web opens in theatres everywhere on Friday, November 9, 2018.

Check out the trailer for The Girl in the Spider’s Web: