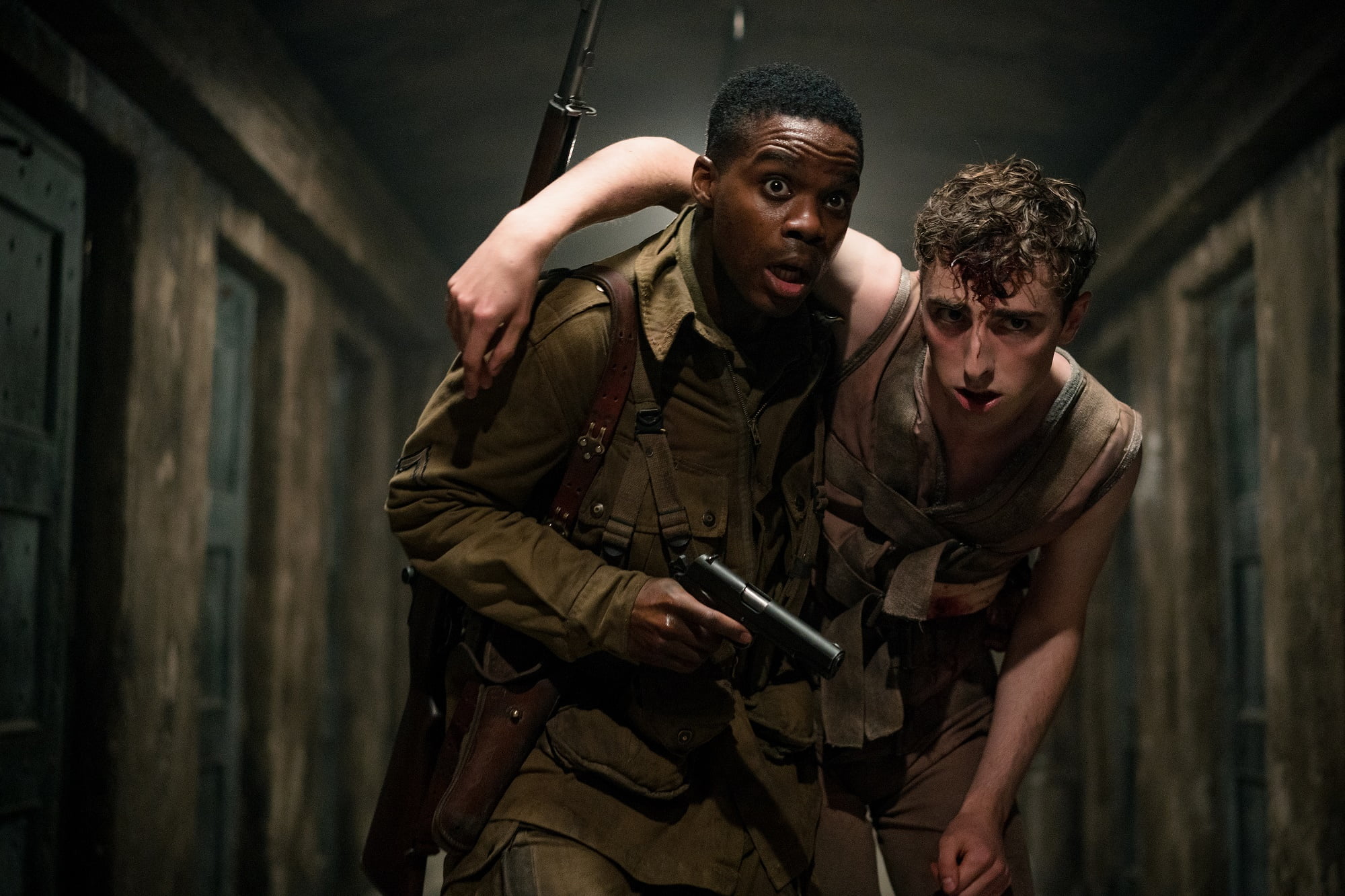 80% war movie, 20% horror flick, and 100% fun, director Julius Avery’s gory throwback adventure and exploitation picture Overlord is one of the best thrillers of the year. Mingling polished modernist filmmaking techniques with a sense of old school nastiness, dread, and camp, Overlord is a tough sell to audiences that might wish it were either more serious or scarier than it actually is, but those hip to what it’s trying to do will eat it up immediately and frequently. And while, no, it isn’t the noticeable or overt link to any of producer J.J. Abrams’ Cloverfield mythology some were anticipating or fearing, Overlord stands as an increasingly rare piece of genre cinema that takes a high concept, modern day political subtext, and a heaping dose of fun house styled shocks and marries them together wonderfully.

It’s the early hours of June 6, 1944, and a team of American airborne troops are attempting a borderline suicidal mission behind enemy lines to destroy a German communications tower by 6am so the planned invasion at Normandy can go ahead. With most of the planes and soldiers sent into the fray falling for the cause, it’s up to a handful of soldiers to break into a well guarded and heavily fortified church where their target has been erected, but the radio infrastructure isn’t the reason for the intense amounts of security. In the bowels of the church, the Reich has been experiment with ways to make their power truly last for a thousand years, and the handful of Nazi soldiers in the town might be the least of all problems for the already banged up and stressed out invading Americans.

For his second feature, Avery (Son of a Gun) opens Overlord with an impressive amount of shocks and bombast in equal measure, plunking the audience smack dab into the middle of the Americans’ ill fated air raid. Things go spectacularly wrong for the heroes from the outset of the film, with planes getting ripped apart, seemingly important characters dying with the snap of Avery’s fingers, and soldiers hurtling through the sky amid a neverending hail of gunfire. It’s disorienting in dazzling in its depiction of the ugliness of war, and a tracking shot that follows a soldier trying to safely navigate his way through the cluttered skies is one of the best bits of cinematography this year. It’s loud, brash, bracing, intense, surprisingly gorgeous, and a great way to acclimatize viewers to Overlord, a film where pretty much anything could happen at any time.

Once the story reaches the ground, things settle down somewhat, characters are established, and the remaining soldiers do their best to carry out the mission. While Overlord is being marketed primarily as a sort of zombie horror film (which it only kinda-sorta is), most of the script from Billy Ray (The Hunger Games, Captain Phillips) and Mark L. Smith (The Revenant, Vacancy) focuses on a story about soldiers fighting for freedom and democracy thrust into a seemingly unwinnable and assuredly deadly situation. Setting the film in the early hours of D-Day lends Overlord a sense of historical importance that most pulpy thrillers wouldn’t dare attempt with any degree of seriousness or even with cheek. Most viewers will be aware of the sacrifices made by soldiers from numerous countries made during the biggest turning point in World War II (making Overlord’s Veterans/Remembrance Day weekend release a bit curious to say the least), and while this film’s necessary side mission unfolds, it’s easy to remember how important the key event on the horizon will be to world history. Obviously, none of the events in Overlord actually happened, but for what’s essentially a polished and handily less problematic take on the Nazisploitation flicks of the 1960s and 70s, Avery approaches the material with considerable grace, respect, and dexterity. 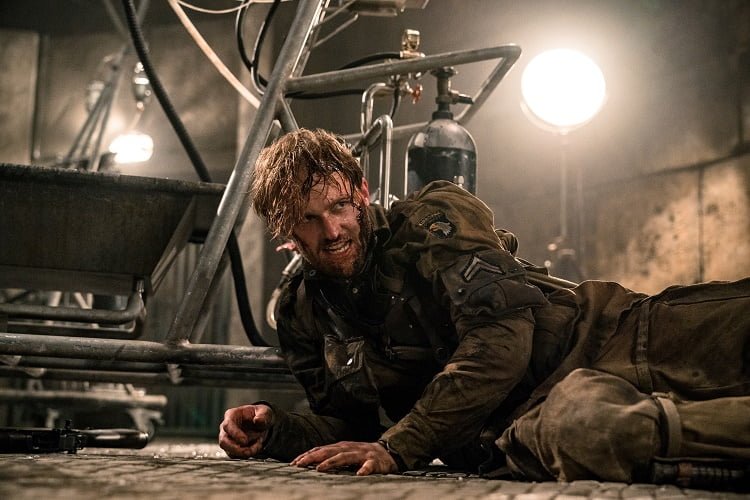 There’s also a healthy dose of racial and religious subtext to Overlord that’s not exceedingly pronounced, but definitely doesn’t go unnoticed. The likable, levelheaded, and increasingly brave protagonist, Boyce (played perfectly by Jovan Adepo), is both a black man and a new recruit, and it’s hard not to read such casting as a tip of the hat to modern political problems around the world. As the far right grows stronger and creates new monsters in their own image today, Overlord becomes a nifty parable about oppressed peoples fighting for a once great nation and gradually realizing their strength and worth by engaging in the fight. The character itself has an interesting arc, one that often finds him testing his overall civility, but what it represents to Overlord’s overall story is far more intriguing.

The supporting characters in Overlord aren’t as nuanced, but all serve their functions well, with Wyatt Russell delivering his best performance yet as the squadron’s steely eyed, no bullshit, alpha-male explosives expert; a role reminiscent of something his father, Kurt, might’ve played in his younger years. John Magaro has a few good moments as a motor-mouthed New Yorker. Mathilde Ollivier essentially plays the third lead as a helpful local scavenger with a creepy younger brother and a “sick” mother who wants the Nazi forcibly run out of town. Danish actor Pilou Asbæk sinks his teeth into the role of the primary villain, a scheming, smooth talking, lecherous, power hungry Nazi, and he cuts an imposing enough presence to be frightening on his own before the story’s supernatural leanings take over.

While Overlord won’t be the horror film many are expecting to be, it’s never boring or listless, even when waiting for the inevitable other shoe to drop. The cat and mouse games between the Americans and the Nazis are well handled and consistently thrilling on their own merits. Once it comes time to uncover what’s going on the seemingly impenetrable church, Avery puts a brick on the gas pedal and never lets up on the film’s intensity and increasingly fun nature, with the performances of Russell and Adepo becoming framed in appropriately heroic and badass fashion. It’s a schlock premise made with the best of B-movie chops and an A-list polish, and it’s assuredly one of the most compulsively entertaining films I’ve seen all year.

Check out the trailer for Overlord: