Review: The Woman Who Loves Giraffes 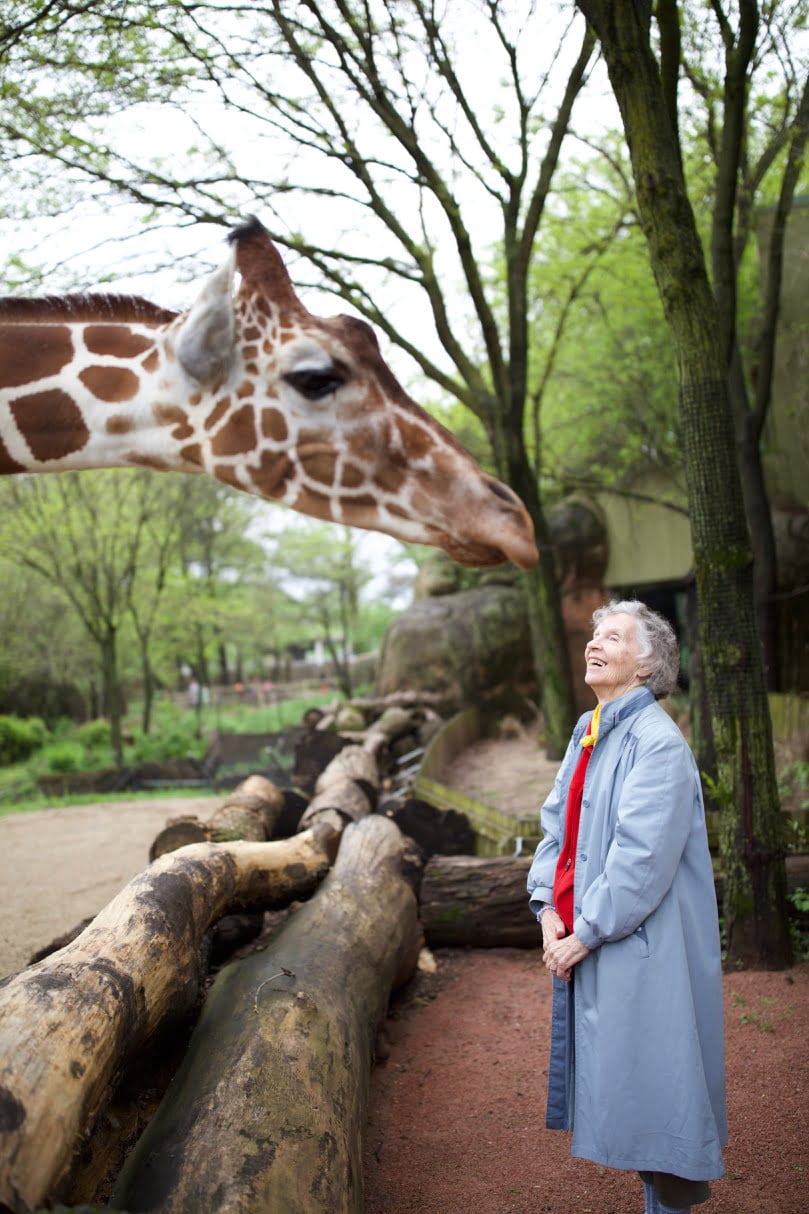 The extraordinary life and career of Toronto born zoologist Anne Innis Dagg gets a loving and much deserved tribute in filmmaker Alison Reid’s documentary The Woman Who Loves Giraffes. Paying homage to a woman whose research of animals in their wild and natural habitats predated the work of similarly minded female scientists Goodall and Fossey, The Woman Who Loves Giraffes is naturally enlightening, inspirational, and rousing without resorting to unnecessary cinematic trickery. Reid makes the viewer feel joy and pride for all of Dagg’s groundbreaking successes and sadness and anger at the patriarchal constructs that derailed her professional career for over thirty years.

In 1956, at the age of 23, Dagg became only the second scientist in history to study an animal in their natural habitat, and she frequently had to hide her gender to accomplish it. Drawn to the unique look and temparment of the giraffe, Dagg travelled solo to South Africa (in the early years of apartheid as a single, unaccompanied white woman) to document and research their behaviour and biology. Although one thinks the uniqueness of the giraffe’s appearance would’ve led to dozens of studies before Dagg’s time, there wasn’t much done in the way of research, leaving the University of Waterloo PhD to literally write the seminal text on the creatures, one that remains cited in nearly all scholarly works written about the long necked animals today. She was the first person to film (which wasn’t cheap at the time) and study the animal’s internal biology, mating habits, diets, and emotions, and all of her contemporaries that are interviewed throughout by Reid freely admit that they’d be lost without Dagg’s work.

The Woman Who Loves Giraffes starts off a bit too quickly for its own good. Although Dagg, her family, and friends are jovial and forthcoming in interviews, not much is made of Dagg’s early years. Outside of fleshing out the relationship she had with her beloved, late husband, Ian, early on (told largely through their correspondences and her journals), The Woman Who Loves Giraffes has a firm focus on its subject’s professional life and not as much about her personal life. It makes sense when one considers that the lines between the personal and the professional would become blurred for Dagg not too long into her academic career, but there are some frustrating gaps within the film due to a lack of personal annecdotes and details. There are some here and there and many hints at her chipper, strong willed personality, but none that are really examined after the opening handful of minutes. The Woman Who Loves Giraffes is a film that dives in and rarely looks back even when it might make sense or enhance the film to do so. 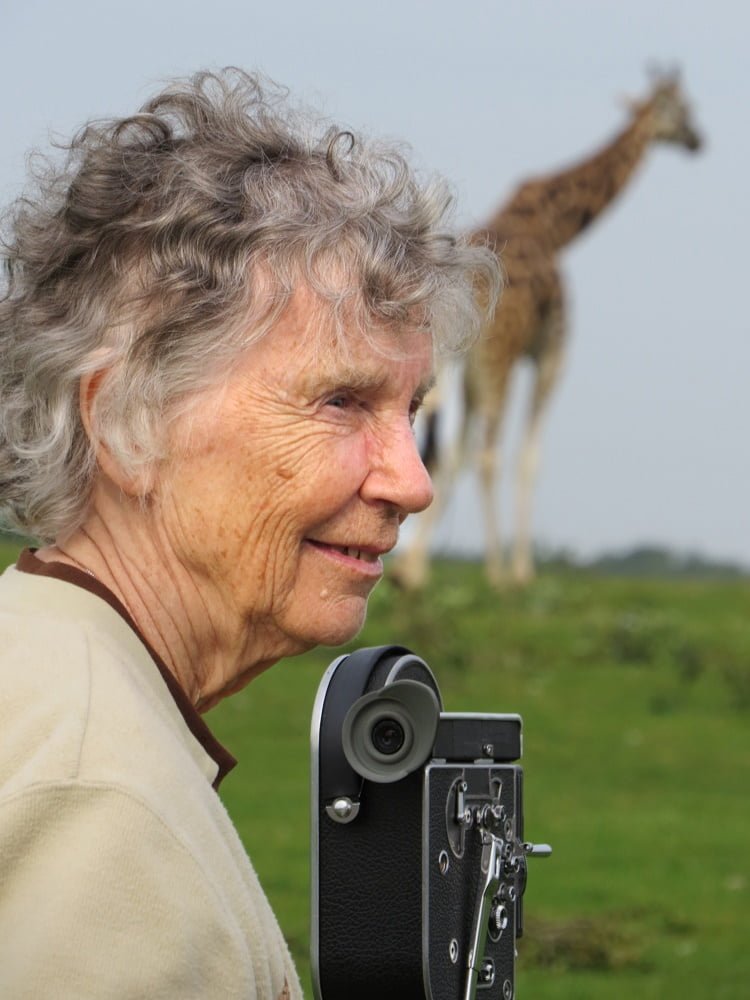 The Woman Who Loves Giraffes becomes most personal and thoughtful once Dagg has completed her first round of groundbreaking research. After doing something that was previously unheard of for a woman travelling alone on an academic mission and producing something zoologists would herald as a bible on giraffes, Dagg, like many professional women working in male dominated fields at the time, found her career stalled. She was denied tenured status as a professor from the University of Guelph thanks to an overwhelmingly sexist oversight board, which is even tougher to stomach when Reid catches up with the smug head of the board, who remains thoroughly unrepentant for almost singlehandedly ruining Dagg’s career. A potential opening at Wilfrid Laurier went to an unqualified and unseasoned male counterpart. She was repeatedly turned down for jobs she was overqualified to perform in the first place. Even her alma mater wouldn’t extend her a job in light of her accomplishments because their dean refused to hire married women. Her frustrating lack of employment would empower her to fight for equality and against discriminatory hiring practices in academia, but it would also put a halt to any sort of full time career in her field for almost thirty years.

Not only does The Woman Who Loves Giraffes carry with it an important and timely message about the struggles and contributions of pioneering women in scientific research, but Dagg’s life lends itself quite naturally to Reid’s three act structure. After looking directly at Dagg’s research from the opening and then speaking at length about the struggles she faced at the hands of jealous and threatened male colleagues in the wake of her biggest success, Reid is able to follow her subject as she makes her first trip back to Africa in almost fifty years. Now that humans have supplanted lions as the giraffe’s most deadly predator, 85-year old Dagg’s renewed research and advocacy efforts are more important than ever. Their trip to Africa even offers up some nifty visual touches where Reid is able to capture Dagg in front of various landscapes and landmarks that appeared in the scientist’s own 16mm films, as well as moments of great sadness and horror when the scientist witnesses first hand the danger giraffes are facing at the hands of humans.

The Woman Who Loves Giraffes boasts a perfect subject for a biographical documentary: an interesting and driven person who blazed a game changing path, fought against bullies that sought to keep them down, and found their work enduring and gaining newfound relevancy throughout the years. While there could stand to be a touch more personality and a bit more background into Dagg’s life outside her work and hardship, The Woman Who Loves Giraffes will hopefully inspire others to follow in her footsteps and speak out with their stories of toxic academic experiences. Dagg’s work is indispensable to the scientific community, and Reid’s film ensures that her struggles were never in vain and brought to a wider public consciousness.

The Woman Who Loves Giraffes opens at The Hot Docs Ted Rogers Cinema in Toronto on Friday, November 16, 2018.

Check out the trailer for The Woman Who Loves Giraffes: