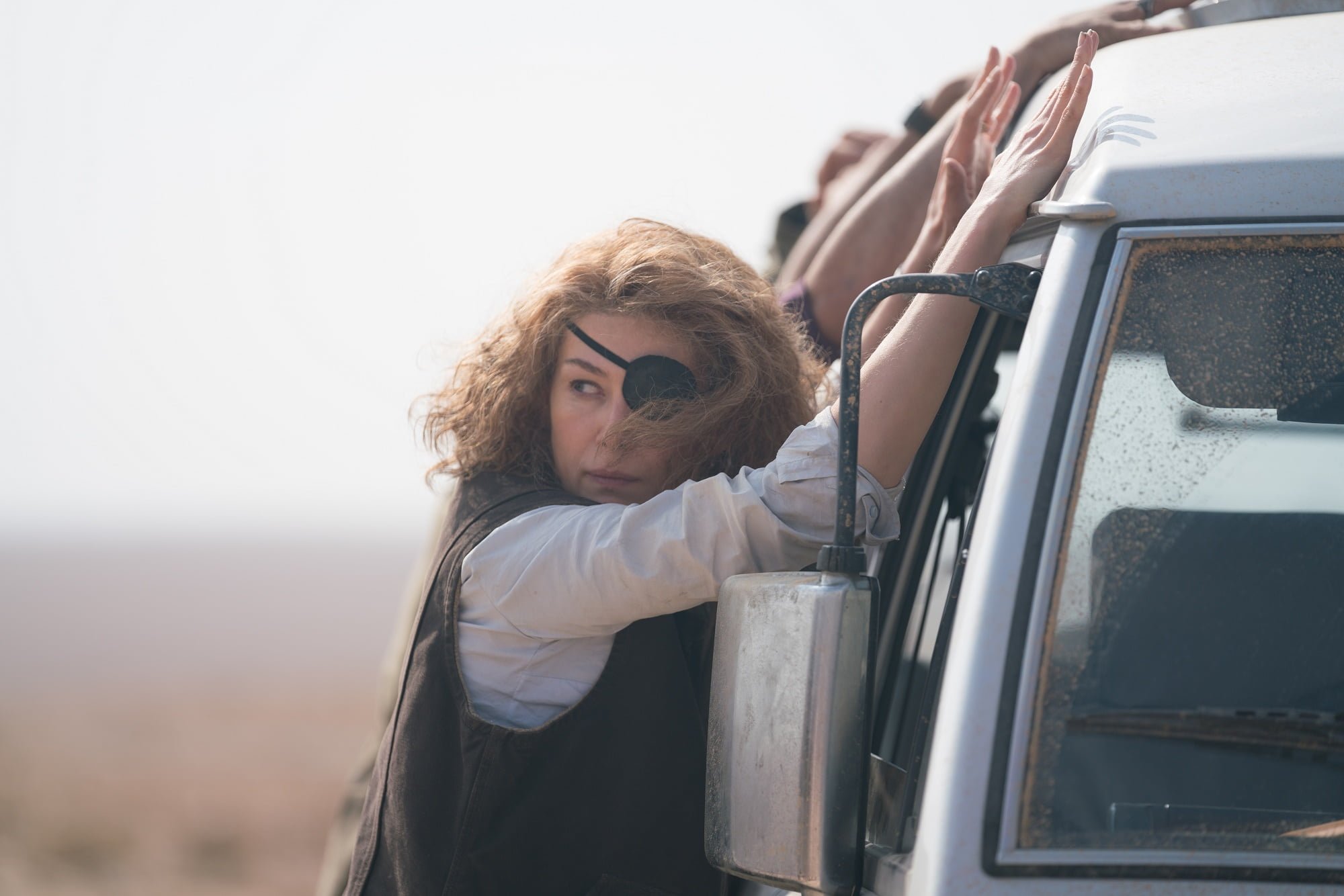 With A Private War, a biopic about the life and work of war journalist Marie Colvin, director Matthew Heineman makes a convincing and confident leap from documentaries to dramatic storytelling, and Rosamund Pike delivers what might go down as her best performance to date. Outside of a few script related stumbles, A Private War benefits greatly from the input of a filmmaker well versed in covering dangerous conflicts himself and a lead performer willing to completely and almost frighteningly channel her real life counterpart without hitting a false or indulgent note. While there are moments throughout that feel like dramatic contrivances, the best sequences and touches of A Private War could make many viewers forget that they aren’t watching a documentary.

Starting 1986, Sunday Times foreign affairs reporter Marie Colvin (Pike) began travelling to various war zones, violent protests, and political uprisings around the world. Like most reporters, the story and the scoop always came first for Colvin, and her health and the feelings of those around her caustic, but astute personality came a distant second and third. A Private War chronicles Colvin’s life at home in London and embedded in hotspots abroad from 2001 (when she would lose an eye covering the Tamil resistance in Sri Lanka, a story no one was paying attention to because journalists had been banned from the country for over a decade by that point) until her final assignment covering the Syrian conflict in Homs in 2012. When she was in her element, Colvin would cover her assignments like a fearless pitbull, but whenever the story was completed and she had to return home, the traumas and horrific images of the past would result in anxiety, post traumatic stress disorder, and self medication.

After making documentaries like Cartel Land and City of Ghosts where his own life would be placed into dangerous and potentially deadly situations on a regular basis, Heineman seems like a natural choice of a journalistically minded director to take a crack at Colvin’s complex story. Displaying gritty realism and  conveying dramatic emotions created from scratch to honour a famous figurehead can often be two completely different things, but the filmmaker acclimates himself rather wall to the storytelling beats of A Private War, even when his well honed direction feels at odds with the script.

An adaptation of Marie Brenner’s 2012 Vanity Fair article “Marie Colvin’s Private War,” Heineman’s film might boast the best material yet from screenwriter Arash Amel (Grace of Monaco, Erased), but it’s still an uneven base to work from. Multiple times throughout the film, characters will dump large and unrealistic amounts of exposition about themselves rather than letting such traits and details emerge organically. A Private War is the kind of film where every character and all of their emerging problems, neuroses, or dreams are rattled off within seconds of meeting them. It’s a script so scared of missing any sort of character development that it forces every actor in the film to announce themselves by reading off a laundry list of traits, something that extends more problematically to the film’s desire to spell out everything troubling Colvin in a single gasp. It’s not good writing, and it could definitely stand to lose a framing device that constantly reminds viewers how far away or close the film is to Colvin’s final mission to Homs, but thankfully the rest of the script and its observations about the daily life and struggles of an embedded journalist are spot on. 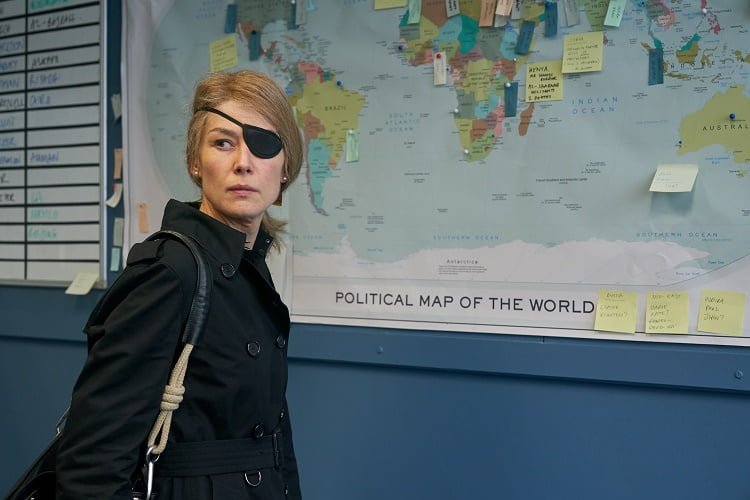 It would be reductive to describe A Private War as a “greatest hits” album looking at the creation of some of Colvin’s best columns and articles, but it’s the easiest way to describe the ambitious and focused plot structure employed by Heineman.  From Sri Lanka and Fallujah to Afghanistan and Libya, A Private War looks back on the most hazardous, fruitful, and frightening times in Colvin’s career; each of them captured almost like stand alone movies with their own specific pitfalls and stressors, but all treated with the same amount of weight and gravity.

Between each of these sections, where she’s frequently flanked by Paul Conroy (a strong Jamie Dornan), a less risk-averse, but still driven freelance photographer, Marie does her best to decompress and heal after witnessing so much death, violence, and psychological torment. She has her share of lovers, but none of them stick until she meets a wealthy businessman (Stanley Tucci) over halfway through the film. She tries to maintain friendships (most notably and poignantly with Nikki Amuka-Bird’s concerned bestie), but in her mind she’s secretly counting down the seconds until she can return to the field and engage in work that’s stressful enough to keep her PTSD induced hallucinations at bay. She drinks heavily not to have a good time, but to quiet her mind. The title of A Private War points to how Colvin’s biggest battle was the one playing out in her mind, and Heineman and Amel treat this with a great deal of respect and subtlety, portraying her effectively and empathetically as a duty bound soldier.

A Private War also comes from a director who shares Colvin and Conroy’s understanding that images can hold immense power. Whether it’s an attempt to lie down in an open field to avoid a hail of bullets, the sight of a backhoe unearthing human remains, or how pathetic an assassinated world leader looks lying on a floor, Heineman makes sure to make the images captured by Conroy and the atrocities witnessed by Colvin stand for something in the mind of the viewer. Heineman’s visual approach is unflinching and uncompromised; an exemplary recounting of horrors that no fictional film could do justice.

And while I normally bristle at biopics that end with footage of the film’s inspiration telling an important part of their story in their own words, Heineman’s use of archival footage at the closing of A Private War left me shaken and in awe of what Pike is able to achieve in the lead. When placed alongside footage of Colvin in an interview, the dedication, craft, and attention to detail in Pike’s performance is immediately apparent. Not only has Pike uncannily transformed into Colvin without drowning in make-up, but the mannerisms and vocal patterns are virtually flawless. All of these lived in touches aren’t distracting or showy, and Pike’s work here isn’t something that should be dismissed as a very good impersonation of a real life icon. It’s one of the year’s best, most intricate, and clearly taxing performance, and in the process A Private War eclipses Gone Girl as the best showcase of Pike’s perpetually underrated talents.

A Private War might not have enough space or screen time to cover everything it wants to say about Colvin’s achievements, sacrifices, and demons, but it’s consistently compelling and frequently harrowing. After viewing A Private War, it’s now impossible to imagine that anyone other than Heineman and Pike could’ve made a better or more definitive version of Colvin’s story. There might be some narrative awkwardness here and there, but otherwise Heineman’s first foray outside of documentary filmmaking is a resounding and wrenching success.

A Private War opens in Toronto, Montreal, and Vancouver on Friday, November 16, 2018.

Check out the trailer for A Private War: