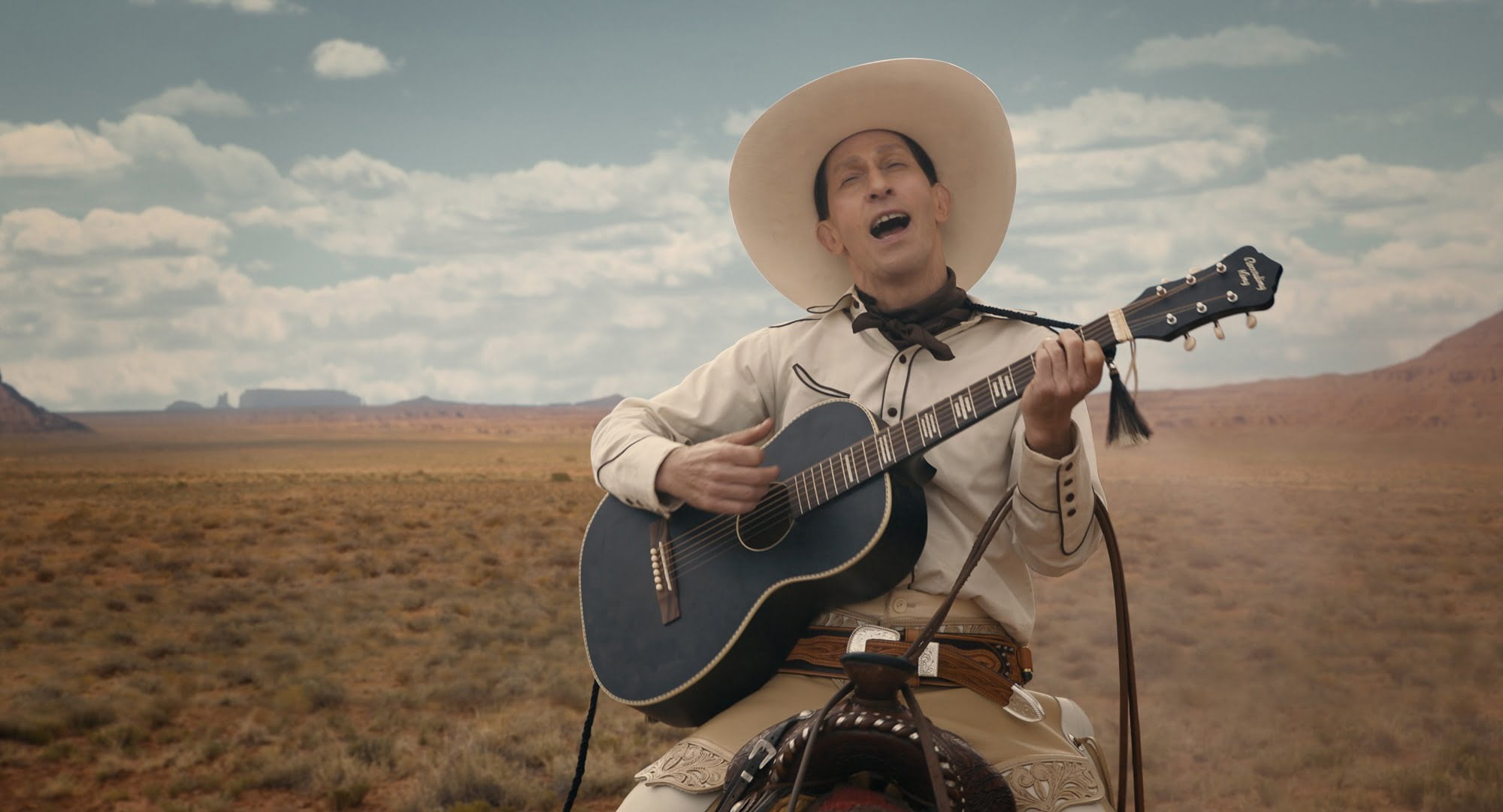 Review: The Ballad of Buster Scruggs

Joel and Ethan Coen’s western anthology movie The Ballad of Buster Scruggs showcases the filmmaker siblings’ love for an all but dead and dusted genre while simultaneously functioning as a casual tour throughout their entire careers. Whether your favourite film from the Coens is a silly, screwball comedy, a high concept thriller, an artfully subdued drama, or a highly specified allegory, The Ballad of Buster Scruggs has something here to tickle your fancy, and if you adore everything they’ve done, there’s an embarrassment of riches here. Thanks to its status as an anthology, critics and viewers alike are bound to say that some of the stories contained within The Ballad of Buster Scruggs are stronger, better composed, or more entertaining than others, but anyone attuned to the Coens’ ever shifting wavelengths will find plenty to admire.

Comprised of six stand alone stories, The Ballad of Buster Scruggs kicks off in typical anthology fashion with a pair of crowd pleasers. The opening and titular short casts a manic and hilarious Tim Blake Nelson as a verbose, smooth talking troubadour with a penchant for violence. It’s followed by a twisty morality tale centred around a bank robber (James Franco) unfortunate falling into a series of increasingly complicated and deadly events, which is slight and silly but boasts a playful Tales from the Crypt style of black humour. While the first short is firmly from the Coen school of storytelling that resulted in the likes of The Big Lebowski and Hail, Caesar (even boasting both films’ love of musical numbers), the second is more in like with the likes of Raising Arizona and Burn After Reading. The opening segments find the Coens – who normally make more serious riffs on the western – imbuing their favourite genre with a great deal of cheek and wit. Of all the performances to follow, Nelson’s shines gloriously above them all, almost making the opening number of The Ballad of Buster Scruggs more suitable as a closer.

The tone shifts abruptly towards the more sombre and cerebral with Meal Ticket, a subdued tale of a showman (Liam Neeson) travelling from town to town with an amputee thespian (Harry Melling) who performs famous soliloquies and oratories to increasingly sparse crowds. There’s very little dialogue outside of the performances given by Melling’s character and a brief stopover at a brothel. The relationship between the two is conveyed primarily through worried looks, glances, and an obviously growing discomfort between the two. Neeson and Melling deliver outstanding performances and convey the overwhelming sadness and frustration both characters feel.

After a brief retreat into dark and downer territory, the Coens shift back towards a lighter tone with All Gold Canyon, an equally sparse work about an eager prospector (Tom Waits) attempting to sluice for gold along a bucolic riverbank. It’s predominantly a one man show, and easily the slightest of the bunch, but as a depiction of a sisyphean figure striving for wealth and prosperity, it more than gets the job done. 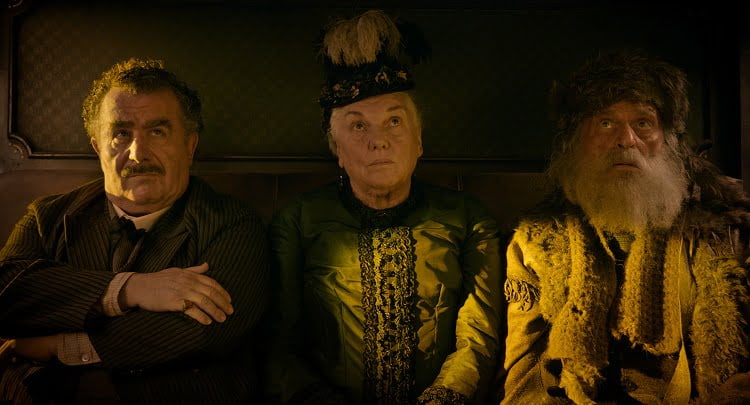 That leads into what will probably be the most divisive and head scratching segment of The Ballad of Buster Scruggs, the melodramatic and intelligently realized The Gal Who Got Rattled. Focusing on a woman (Zoe Kazan) left to deal with a great amount of in the wake of her husband’s passing while part of a wagon train heading east, The Gal Who Got Rattled could be read in any number of ways, and while it’s one of the best acted shorts – including great turns by Bill Heck and Grainger Hines – it’s the one that asks a great deal of thought on the part of the viewer. Simultaneously an unsympathetic period piece, a loose and expanded adaptation of a work by Stewart Edward White, and a heavily metaphorical look at contentious expansion and migration policies in the years following the Franklin Pierce administration, this portion of the Coens latest is both curious and fascinating. It moves at a crawl and without a hint of postmodern theatricality or wit, and its indebted to a literary metaphor that barely anyone outside of scholarly historical circles would appreciate. It’s both indebted to the western genre and something that holds conventional tropes and cliches in utter contempt. It certainly won’t be for everyone, but it’s the segment that will offer scholars and cinephiles alike a deeper dive into its meanings and intentions than the other Coen works on display here.

It all rounds out with the gothically minded The Mortal Remains, which is more of a nod to transcendentalism and romanticism than oaters. It’s a pretty simple tale of five people of different backgrounds and levels of education in a stagecoach – two of whom happen to be bounty hunters – talking about life, religion, and morality. Like the story preceding it in The Ballad of Buster Scruggs, this one’s a bit of an odd duck and sadly the least successful and most frustrating of the collection. While there’s some gleefully malevolent work here from Brendan Gleeson and Jonjo O’Neill as the bounty hunters, and the short boasts the Coens most painterly visuals of the film as a whole, it’s all a rather long walk to get to an eventual “we’ve all gotta die sometime” punchline. It does send things out on a bit of an off-key note, and there’s nothing wrong with The Ballad of Buster Scruggs that couldn’t be rectified by swapping its place in line with one of the first two segments.

While the tone and tenor of each segment differs depending on the literary style of story the Coens are looking to ape at any given moment, there’s an overall throughline running through The Ballad of Buster Scruggs that seeks to further pick away at westward expansion mythologizing. And like the best of single (or in this case, dual) filmmaker crafted anthologies, every story looks, moves, and sounds like the work of the same people and not multiple sets of hands, thanks to assistance from cinematographer Bruno Delbonnel and composer Carter Burwell (both of whom are clearly having a blast with the first, third, and last stories in particular). While some might dismiss The Ballad of Buster Scruggs as a minor work from major filmmakers – more of a playful clearinghouse for clever ideas than a monumental achievement – such an assessment would be an unnecessary slight against the anthology genre as a whole for not being able to sustain six epic, feature length stories. The Ballad of Buster Scruggs is a rootin’, tootin’, dang fine bit o’ work slotted firmly in the good books of the Coens filmography.

The Ballad of Buster Scruggs opens at TIFF Bell Lightbox in Toronto on Friday, November 16, 2018. It’s also available to stream on Netflix everywhere the same day.

Check out the trailer for The Ballad of Buster Scruggs: