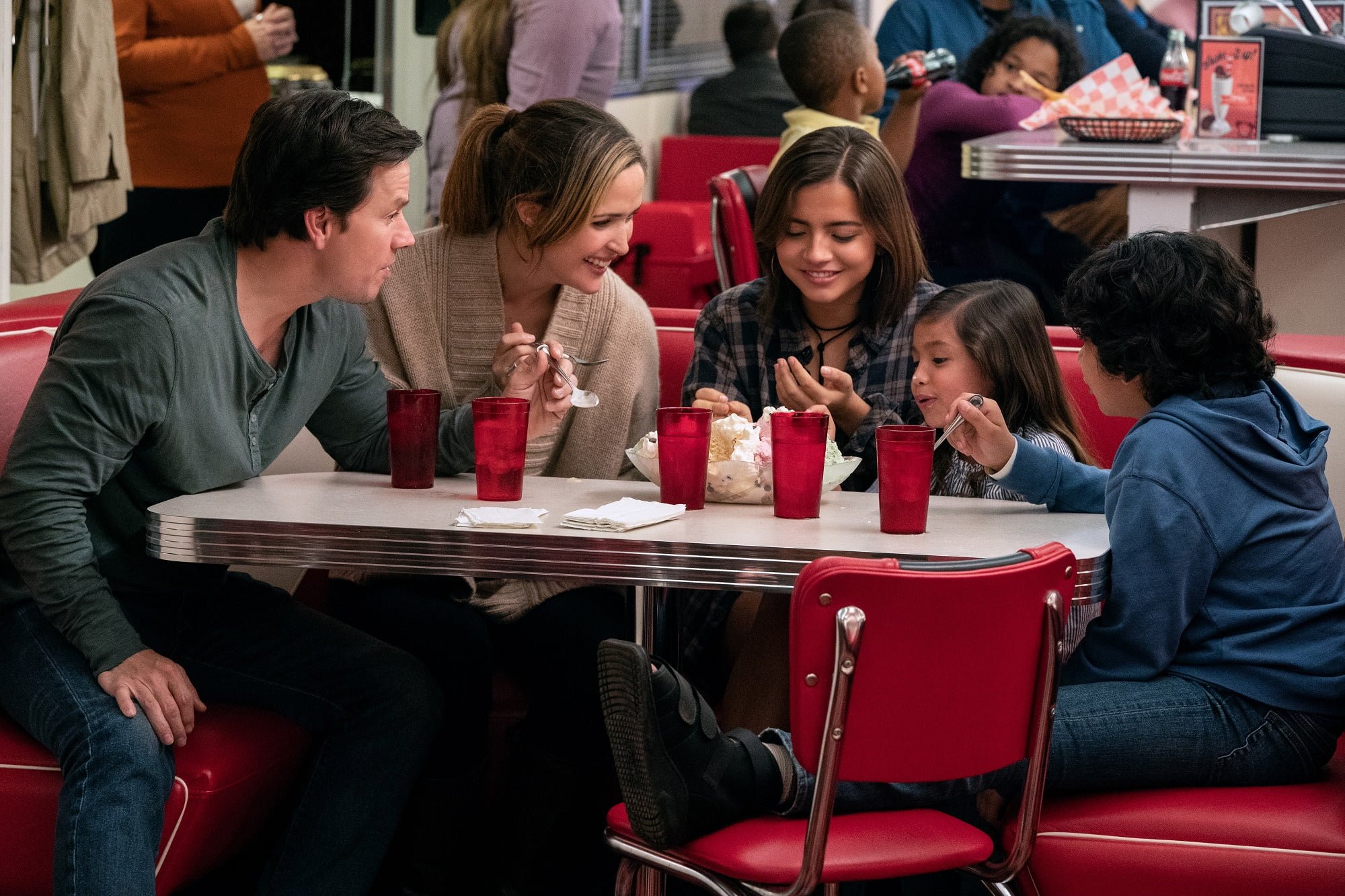 One of the finest, funniest, and smartest mainstream family comedies in recent memory, the moving and charming Instant Family balances flashes of snappy banter and slapstick comedy with an overwhelming amount of realism and emotional intelligence. Adapted from his own personal experiences as a foster parent by director and co-writer Sean Anders, Instant Family is the type of thoughtful comedic entertainment that audiences haven’t gotten in quite some time. Clearly indebted to the more serious efforts of John Hughes or Ron Howard’s Parenthood than most modern day family comedies, Instant Family is one of the most pleasant surprises of not just the holiday season, but of the year in general.

Happily married couple Pete and Ellie Wagner (Mark Wahlberg and Rose Byrne) have successfully built up their careers as a contractor and interior designer, respectively, fixing up and flipping houses. Pete and Ellie have been enjoying the fruits of their labour for most of their adult lives, but they’ve also been putting off starting a family. Not wanting to be aging parents to a newborn, Ellie suggests that they give adoption a try. After unsuccessfully attempting to make a connection to a younger kid, Pete and Ellie meet Lizzy (Isabela Moner), a teenager who makes an impression on the couple at an awkward mass adoption mixer for children and prospective parents. Pete and Ellie find out that adopting Lizzy also means taking in her two younger siblings: shy and anxiety ridden Juan (Gustavo Quiroz) and adorable, but sometimes rage filled Lita (Julianna Gamiz). The Wagners agree to a trial parenting run before fully adopting the kids or being granted legal custody. Naturally, parenting turns out to be more than they bargained for, but in addition to learning how to deal with everyday crises that most families face, Pete and Ellie realize that these kids have been through a lot in their young lives and understanding their needs, fears, and temperaments will take extra love and care.

Instant Family is the kind of movie one wouldn’t expect from the director of Sex Drive, That’s My Boy, and the Daddy’s Home movies. Abandoning the usually broad, crowd pleasing, and frequently juvenile brush strokes he uses in his other comedies, Anders instead creates a movie that comes straight from his heart and mind. While there are a fair number of slapstick set pieces and some admittedly funny pop culture jabs (including a running gag about The Blind Side being a terrible movie, which is a bit dated, but still accurate, and Wahlberg thinking way too hard about whether or not his adopting Latino kids makes him a white saviour character), Instant Family never leans into anything that feels overly staged or false. Anders wants to underline how difficult adoption can be, and the film instead relies mostly on humorous moments that feel reasoned and realistic. Not all of Instant Family’s comedic beats fit that mold, but there’s always a sense from the material that if Anders were to try and make the film as authentic to his experiences as possible, it might drive audiences away. It could’ve gone terribly wrong, but viewers could stand to learn a lot from the adoption process as it’s depicted in Instant Family.

Every member of the Wagners, from the core parents to the adopted kids to the extended grandparents and siblings, are given rich and surprisingly textured inner lives and played by actors who want to see Anders’ story resonate in the strongest way possible. Wahlberg, in his warmest performance to date, uses his underrated talents for playing a likable smartass to make Pete the “cool parent;” someone who frequently defers and deflects conflict rather than dealing with it head on, is most likely to cave in to outlandish demands, and who desperately wants to relate to his kids and is willing to listen to them at great length to understand their needs. The always reliable Byrne shines once again here as the worrywort who starts believing her best isn’t good enough when the kids start rebelling and pushing back against their adopted parents’ wishes. Julie Hagerty and Margo Martindale are spot on casting choices to play Byrne and Wahlberg’s mothers, respectively, with the former providing gentle comic relief and the latter giving a surprisingly textured performance that results in a climactic, heartfelt revelation about the character that might be the best moment of the film.

Even the actors tasked with playing the Wagners’ child services liaisons are perfectly realized. Played by Octavia Spencer and Tig Notaro, these seemingly minor characters act as exceptional and lightly comedic reflections of people within the social services system who are trying to do good things for kids with troubled pasts. The chemistry between Spencer and Notaro – a comedic dream team I never knew I wanted to see before Instant Family – is just as strong as the one shared by Wahlberg and Byrne (which, come to think of it, is also a duo I never expected to work as well as it does). Both might seem overqualified for such supporting roles on paper, but I also couldn’t imagine the movie without them in it. 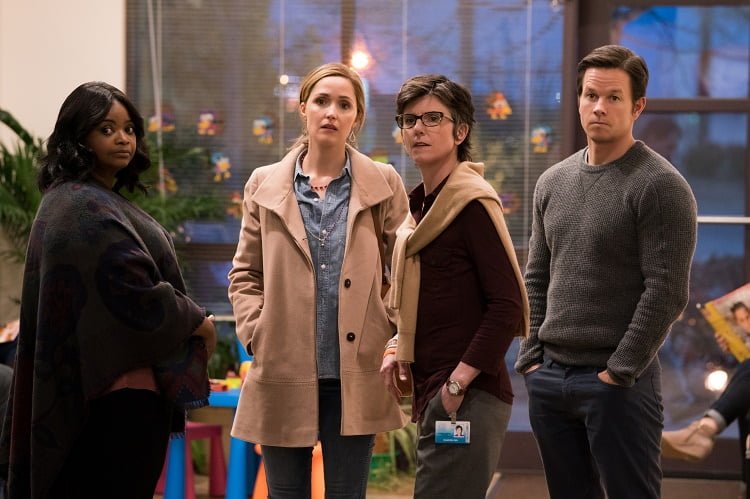 The cast is more than willing to engage on a deeper thematic level with Anders’ goals for Instant Family, which is to respectfully, humorously, and intelligently examine misconceptions about taking in foster children. Yes, there are plenty of jokes and gags throughout Instant Family about toddler tantrums, teenage flirting, sharing a single overused bathroom, and the smugness of other parents that audiences of any persuasion can easily understand and digest, but the highly specific problems and pitfalls of the adoption process are the ones Anders’ wants to focus on the most.

Heading into the process, Pete, Ellie, and several other parents using the same agency all have their own misconceptions and prejudices about adoption that Spencer and Notaro’s characters will have to help eliminate. Whether they’re successful parents like Pete and Ellie, a same sex couple, or a pair of holy rollers, they all come into the process with the misapprehension that actually birthing a child and raising them as an infant is the hardest part, and that the job is basically done for them by the time they come along. These prospective guardians need to come to the eventual realization that their job is harder in many respects than traditional parents because the children come with specific and wildly varying emotional needs that need constant attention; ones that won’t be apparent immediately because they weren’t there to help raise their kids from an early age.

Anders, in a refreshing and almost revolutionary move for a film on the level of Instant Family, never wants to make adoptive parents into saints or heroes. It never wants to be so falsely uplifting that it will make people want to rush out and adopt a kid the same way many of them think they could take on the needs of a rescue animal from a shelter. Instead, Anders wants to paint them as people trying to do their best under frequently trying situations. If being a parent is one of the hardest jobs in the world, being an adoptive parent is like working for the bomb squad division. Whenever one of these parents passes a successful milestone, they’ll happily gloat about it in their weekly check-in support group, but that only makes their setbacks and missteps all the more crushing.

In the script’s most brilliant move and another bit of exceptional casting, the kids selected for Instant Family not only feel and look credibly like siblings, but they’re written in a poignant fashion that underlines how differently children can process and experience trauma even as siblings. There’s never a moment when Lizzy, Juan, and Lita flat out tell Pete and Ellie everything about their past. They’ve been through the system too many times (most recently with a loathsome older couple who doesn’t seem to give a shit about them), and their defence mechanisms have been built up and fortified under the weight of diminished expectations. Lizzie exhibits the traits of an everyday rebellious teenager, but she’s also homesick for the care of her recovering addict birth mother, who’s about to be released from prison, a situation that only intensifies her young adult angst in believable ways. She also basically raised her siblings on her own from a young age, meaning she thinks she has just as much maternal authority as Ellie. Sensitive, accident prone and scatterbrained Juan always breaks down into a tearful mess whenever he does something wrong or he’s scolded, and while Anders never expressly states what happened with him, as a child who came from an abusive family background, I understand that sort of anxiety all too well. Lita, much like her older sister, flip-flops between sweetness and bitterness, having not yet outgrown a phase where she thinks she can get away with whatever she wants by throwing outlandish and sometimes frightening tantrums. All of these different coping mechanisms are deftly handled in Instant Family, and all three young actors playing the kids are giving performances that are just as nuanced and thoughtful as their adult counterparts.

Instant Family deserves all the praise in the world for taking a premise that could’ve been insulting, problematic, or saccharine in the wrong hands and turning it into something genuinely affecting. Anders and co-writer John Morris (who brings his own experiences in similar situations to the film) have clearly thought about all issues arising from foster parenting at great length, and while I’m sure they couldn’t fit everything they wanted to say about the process into a single volume, Instant Family will hopefully make viewers look at the adoption process in a new light. While the writers are best known for more brainless, populist fare, Instant Family carries with it a sense of conviction and purpose, wanting to gently and properly educate while entertaining. Instant Family is a frequently hilarious film on its own terms, but it becomes memorable and likable because it comes from a place of truth and honesty. It’s the best family movie of the holiday season by leaps and bounds, and the most inspired and least cynical example of the genre in what feels like an eternity.

Check out the trailer for Instant Family: