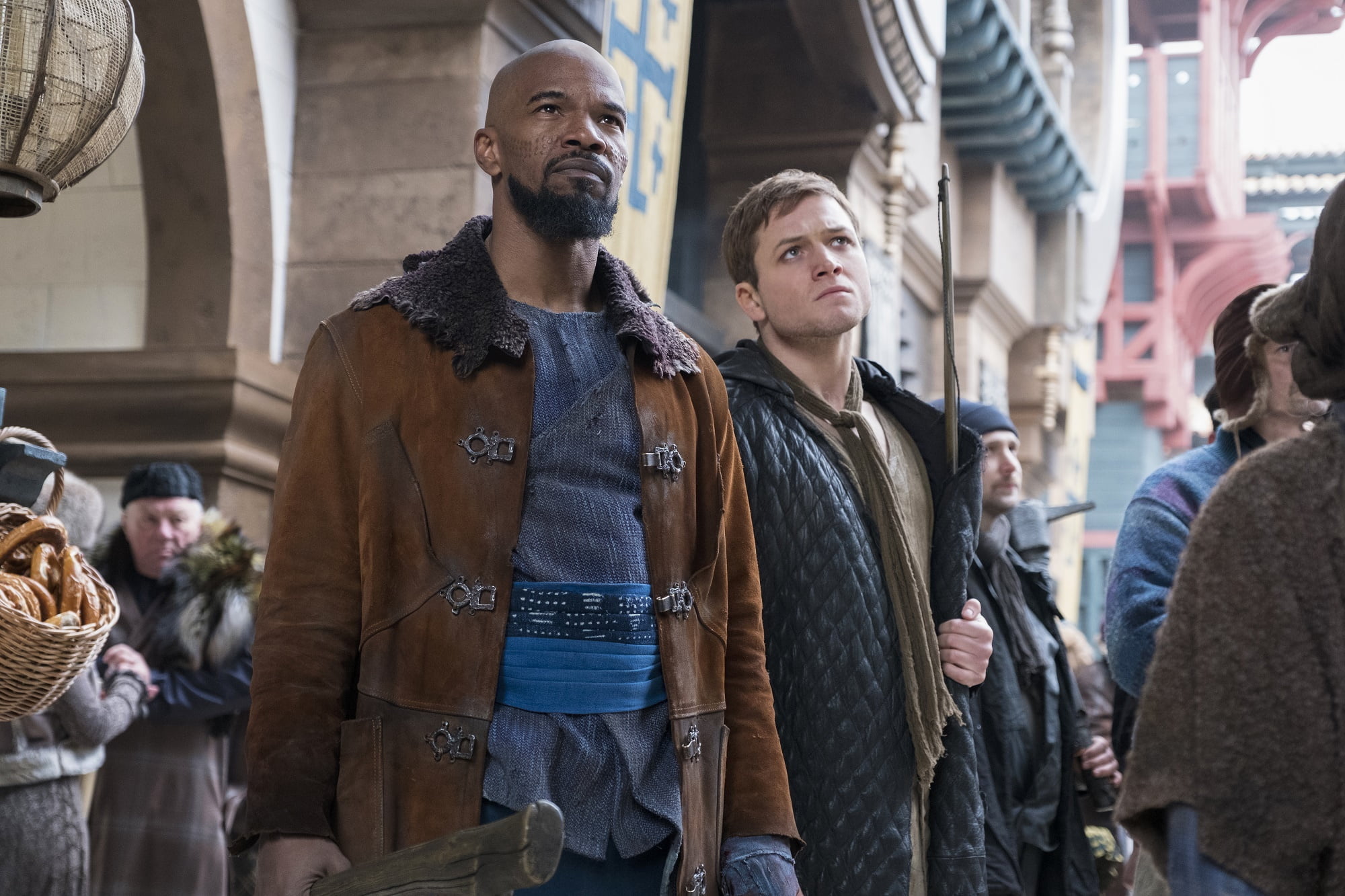 A film so uninspired and generic that even complaints about it will sound cliched and rehashed, the latest cinematic incarnation of Robin Hood is so vaporous that viewers will forget they’re watching it as it’s unfolding. That’s not really an exaggeration. Twice during the film’s many interminable passages of plot dumping dialogues, my mind wandered to any number of topics that weren’t Robin Hood. I thought of what I was going to make for dinner, potential Black Friday purchases, calling friends to hang out over the weekend, and that Robin Hood was playing in an incredibly small theatre on the opening day of a major tentpole release. These thoughts weren’t even prompted out of any sort of mental anguish that Robin Hood – which where a more fitting title would be Robin’s Creed or Call of Duty: Crusades Warfare – was causing me. My mind just naturally drifted, almost as if the film were encouraging me to stop paying attention to it. Invariably, I would drift back to what was being said by the characters before they wrapped the scene up, and while I wouldn’t be lost in terms of following the plot, I felt like I missed precisely nothing at all.

Robin Hood opens with laughably portentous narration telling the viewer that what they’re about to see “isn’t a fairy tale” and to “forget the history” and “forget what you know.” And then it just goes ahead and basically gives viewers what they already knew only in a slightly jumbled up format. Robin of Loxley (Taron Egerton) had the upbringing of a silver spoon fed rich kid (although we know nothing about his parents, or maybe that was the one bit I missed while thinking about making pancakes and bacon for dinner) until he was drafted into the war effort in Arabia, spearheaded by the nefarious and greedy Sheriff of Nottingham (Ben Mendelsohn). After getting wounded by his own troops and dishonourably discharged for opposing the executions of unarmed prisoners of war, Robin returns home to find his assets seized, his property in disarray, and the news that everyone thinks he perished two years prior. To make matters worse, his beloved Marian (Eve Hewson) has moved on and into the arms of another man (Jamie Dornan), a freedom fighter keen on rallying the people to rally against the sheriff. Now impoverished, Robin reconnects with John (Jamie Foxx), a moor soldier grateful to the English veteran for helping him escape and an attempt to spare the life of his son. John wants revenge against the war effort, and he’s willing to train Robin for a battle that could actually make a difference in the world. John helps Robin become a better soldier, and together they work to steal money from the sheriff and the church that’s profiting from the plump wartime coffers. Robin steals from the rich, gives to the poor, and moonlights once again as an aristocrat in an effort to get as close to the psychotic sheriff as possible.

Although it’s clearly over saturated, way too serious for its own good, and too ridiculous to be taken seriously from the start, Robin Hood 2K18 starts off with a pretty good bit of modern social subtext. The first major action sequence – although hampered by bloodless action and mixmaster editing, two things that will dull the film throughout – is shot in a way to be eerily reminiscent of modern war films depicting Middle Eastern conflicts, where a bunch of white soldiers are sent into battle for dubious reasons. Sure, it’s kind of hilarious that everyone in the battle is shooting arrows at each other that blast through stone pillars like they’re grenades wrapped in dozens of armour piercing artillery shells, but the point is obvious and astute at the same time. And outside of the Sheriff of Nottingham running his war campaign along the same lines Donald Trump might, that’s the last compliment that I could really pay Robin Hood. For a fleeting moment, it was about to say something on point. (Actually, that’s not entirely true. There’s one other compliment. Whoever did colour correction on Robin Hood did a phenomenal job.)

The script for this incarnation of Robin Hood – the first feature screenplay from Ben Chandler and David James Kelly – isn’t grittier, sillier, smarter, or more innovative than any version of the story that came before it. The characters simply sit there, going through their motions, playing out every inevitable scenario, and wasting time until a sequel set-up arrives that smacks of the most wishful thinking of the year and the credits roll. The only way to enjoy Robin Hood isn’t to “forget what you know,” but to have never seen or heard any version of this story before.

The sets clearly cost millions, there’s enough pyrotechnics on display to start a legitimate war, and there’s clearly enough money in the budget to hire the likes of Foxx and Dornan for the most thankless roles of their careers, but the script is as deep as a Bazooka Joe comic. It’s frankly unfathomable that anyone would look at the script for Robin Hood and think that tens of millions (possibly even hundreds of millions) of dollars could be thrown at this. I guess they saved money on the costuming, though, since everyone is so neatly and anachronistically dressed that they all look like they just stepped out of H&M. (Seriously, how many people during the crusades owned tight, intricately designed, and flashy leather jackets?) 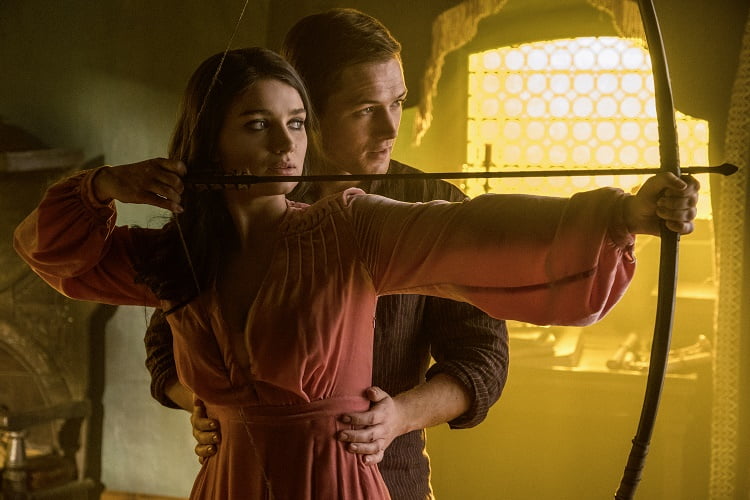 Robin Hood is the first feature film from British television veteran Otto Bathurst, and while the images are competent (if frustratingly hard to process thanks to all the frantic editing to make sure that there isn’t a visible drop of blood spilled), he’s not strong enough to elevate this. It’s the kind of sped-up and slowed down action that audiences see in every action film nowadays, and when that’s coupled with a tired, wheezing script, it’s a recipe for disaster. Late in the film, Bathurst does mount a nifty and somewhat rousing chase sequence with a couple of horse drawn carriages navigating some tight spaces, but the problem with that scene is that while it would’ve made for a perfect finale, there’s still almost thirty minutes of movie left once it ends.

Maybe someone involved with the production thought that the rising starpower of Egerton would be able to turn Robin Hood into a charismatic, crowd pleasing success. If someone did think that, they were dead wrong. Although he’s physically capable to handle the stunt work required of him for the part, Robin Hood’s lack of depth leaves Egerton’s shortcomings as an actor exposed. Without a defined character to delve into or some sort of funny accent or appearance, Egerton’s just another bland leading man in a boring action movie no one will remember in a year’s time. He has nothing to work with, and he’s seemingly not allowed to bring any tricks or eccentricities to the party. It’s not a good look for the young actor, but again, people will forget about it, and he should be thankful for that much.

Egerton isn’t even given anyONE to work with. His chemistry with Hewson’s Marion doesn’t exist, and she’s even more wooden than he is. Unless she’s smiling, Hewson’s expression is blank throughout, and her monotone delivery of every line suggests her professional investment in this is minimal. Foxx has clearly gone into business for himself, offering up and over-the-top, but never amusing mash-up of Richard Burton and Laurence Olivier. Even the almost always reliably villainous Mendelsohn seems disinterested for the first half of Robin Hood, until F. Murray Abraham shows up in a bit part as a corrupt Cardinal, and the sheriff’s performance has some life breathed into it. At least there’s a good scene where the Sheriff of Nottingham tells Robin that he’s going to boil him in his own piss. I did remember that bit.

Robin Hood is the cinematic equivalent of getting a participation medal simply for showing up to work. No one should be proud of the baseline work they did here, but they should be proud that they got through it and that none of it will matter in the near future. If the filmmakers had taken their resolutely formulaic screenplay a bit less seriously and had some fun with it, Robin Hood might’ve been somewhat enjoyable, or at least a more ambitious misfire. I can’t even really say that this is a debacle in good conscience. Debacles are at least interesting because of how wrong they went. There’s nothing interesting about the failure of this Robin Hood.

Check out the trailer for Robin Hood: