As relaxed and off-the-cuff as drinks among friends, the chatty, ruminative, and frequently funny documentary Nothing Like a Dame find four friends and British legends of stage and screen riffing about their lives, careers, fears, and dreams. Overseen by director Roger Michell (My Cousin Rachel, Notting Hill), Nothing Like a Dame has a simple, likable concept: put Judi Dench, Maggie Smith, Joan Plowright, and Eileen Atkins around a table and just let them talk. It’s purposely ragged and low tech in its construction, but once Michell or one of the ladies at the table asks a question, it’s a collection of observations, opinions, and amusements presented without embellishment. It’s a film that simply lets four women at the top of their profession be themselves and speak their minds.

Nothing Like a Dame (known as Tea with the Dames in the U.S.) finds the four titular recipients of symbolic British nobility assembling at the estate Plowright once shared with Sir Laurence Olivier. They’ve been friendly for decades; long before any of their film careers took off. Dench, Smith, Atkins, and Plowright all got their starts working for some of the most venerable and respected theatre companies in the UK. Having worked in both primary fields of the acting profession, they have plenty to say about working with difficult male directors, sharing the stage and screen with their spouses and significant others, how dangerous it can be to read reviews, and how almost all of them faced discrimination because someone thought they weren’t attractive enough.

None of Michell’s subjects are keen to dwell on the bad stuff longer than absolutely necessary, and more inclined to jovially shoot the breeze with their friends. At times, the intrusion of Michell’s camera and still photographer rankles the ladies, who would be doing just fine carrying on a conversation at their own pace and tenor, but for the most part, Michell remains as unobtrusive as possible. At some point a prompt or comment will change the direction of the conversation, and the viewer simply watches along to see where it all leads. 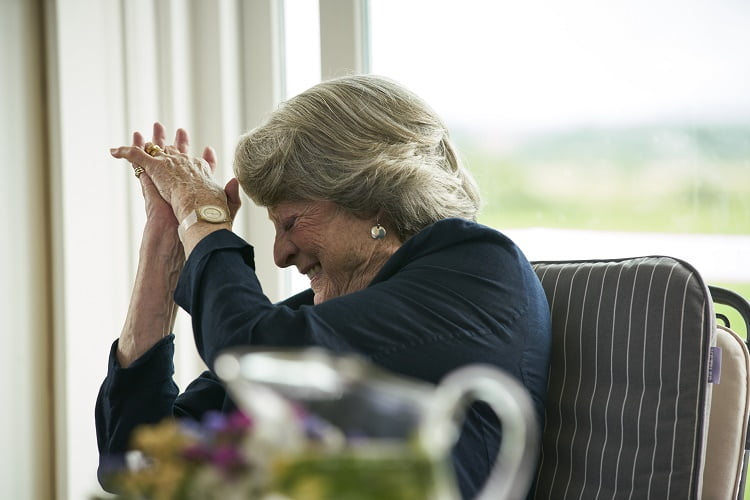 Nothing Like a Dame isn’t so much about actors delivering a masterclass or a pointed look into the sexual inequality that female performers often faced, but rather four, relaxed, largely anecdotal biographies and oral histories being delivered in tandem. Dench speaks at length about getting over her fear of directors and constant desire for feedback and how she didn’t really start her film career until the late 90s. Plowright, who’s more or less retired at the moment, discusses what it was like living alongside Olivier and what it was like to be seen as someone who’s intimidating by her proximity to the greatness of her spouse. Smith comes across as the jokester of the group, musing that it never gets easier to be on a film set (either big or small) and sharing a story about an incident where Olivier accidentally knocked her out. They all share their feelings about playing Cleopatra, acting methods new and old, and Smith good naturedly pokes fun at her time on Downton Abbey.

Nothing Like a Dame doesn’t spend a lot of time with each of the actresses in a one-on-one setting, but they’re frequently paired up with each other whenever they’re not gathered together around a table on a rainy afternoon. The friendship and healthy competition between the ladies is easy to see, and their individual personalities shine through at every turn. Atkins comes across as the most jovial and optimistic of the bunch, cracking wise almost as often as the sharp-witted Smith, who occasionally bristles and becomes serious. Dench comes across as the most grounded and continually professional of the circle of friends, but she has an infectious laugh and sits on some of the documentary’s best stories until it’s the perfect moment to share them. Plowright seems like the most maternal member of the group, content that she had a wonderful career and marriage and thankful that she can still spend time among friends.

And that’s really all there is to say about Nothing Like a Dame, a documentary that lets its subjects speak their histories for themselves. It’s an intimate and unpretentious opportunity to sit down with a quartet of incredible talents outside of standard, static talk show settings, made even rarer by the fact that most of these performers rarely travel outside the UK anymore and infrequently grant interviews. Archival clips interspersed throughout will remind viewers what each of them were like in their prime, but they almost aren’t even necessary. These women need no introduction, but Nothing Like a Dame will tell you all you need to know about them.

Check out the trailer for Nothing Like a Dame: