Review: Dead in a Week (or Your Money Back)

Built on a premise that could either be mined for pitch black comedic gold or become grossly offensive and insensitive, the high concept and mostly deadpan British comedy Dead in a Week (or Your Money Back) takes the path straight down the middle of both extremes and ends up being not much at all. There are no two ways about it: a film poking fun at someone who’s grossly incompetent at suicide had better be either outlandish or witty, empathetic and perceptive. There are flashes of both extremes in writer-director Tom Edmonds’ debut feature, but not enough to leave a lasting impression or even an opinion on what they just saw; the only emotional elements a film with this gutsy and edgy of a premise needs to justify its overall existence.

27-year old lifeguard and struggling writer William Morrison (Aneurin Barnard) has been consumed with Sartrean existential malaise for years now, constantly bemoaning his life’s complete and utter lack of meaning. He’s attempted suicide nine times already (ten or more if one counts his “cries for help”), but through either bad luck or poor timing brought on by hesitation, William has failed at all of them. One night, he’s approached by Leslie O’Neill (Tom Wilkinson), a chatty assassin with a unique proposition. In a bid to meet his quota and stay in a local union of fellow hitmen, Leslie offers to kill William with a single shot that he won’t see coming for the bargain price of two grand. William enthusiastically agrees, and Leslie begins preparations, but a publisher suddenly and unexpectedly expresses interest in some of the young writer’s depressive ramblings. William meets his potential editor, Ellie Adams (Freya Mavor), a like minded but decidedly less depressed fatalist and kindred spirit who makes the young man reconsider ending his life. This greatly vexes Leslie, whose wife (Marion Bailey) and uppity boss (Christopher Eccleston) are pushing the aging killer hard towards retirement, something he’s fighting adamantly against. 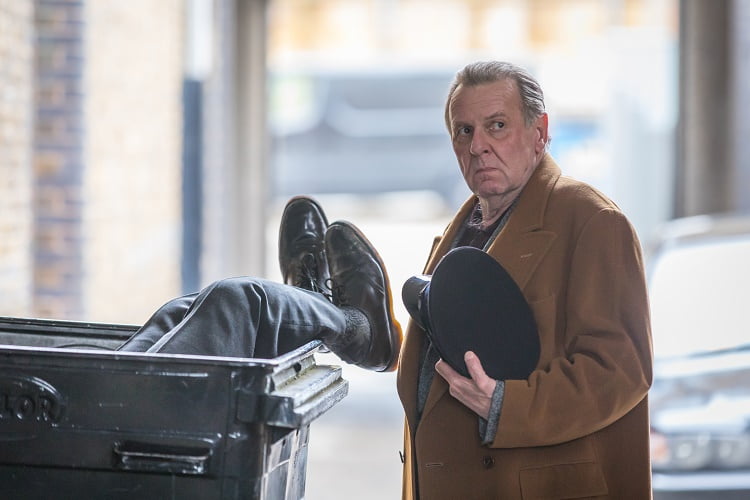 Even in the early going of Dead in a Week (or Your Money Back), Edmunds struggles mightily to settle on a tone, leaving Aneurin with the unenviable task of trying to figure out how to portray William as he goes along. It’s not a particularly likable character to build a film around. William is a pretentious and unknowingly selfish and self-absorbed tit. He’s too pathetic to want to see him live, and too ineffective and slight to wish death upon him. Aneurin tries his mightiest to try and make heads or tails of what Edmunds wants to do with the character, but it’s hard when the role is written in wildly different ways from scene to scene. The character and the film built around it are hampered even further by the dead on arrival romance between William and Ellie, a couple so bland and ill defined that one almost wished Edmunds had packed his film with tasteless set pieces instead. The romance pads out the running time and does little else.

Dead in a Week (or Your Money Back) is at its best whenever the focus is placed squarely on Wilkinson’s charming, but scattered professional whacker, and one wishes that the film had been more about Leslie and much less about William and Ellie. The relationship that Leslie has with his kind hearted, needlepoint loving wife is far more satisfying and fruitful to watch unfold than spending time with a couple of self-and-death obsessed narcissists. His existential malaise is more detailed and relatable. His chemistry opposite Barnard, Bailey, and Eccleston is uniformly fantastic (even if the latter is simply phoning it in with a lukewarm riff on the same kind of character Ralph Fiennes played in In Bruges). It’s not surprising that William would want his final written work to be about someone exactly like Leslie because that’s a great personality to build a story around. Unfortunately, Leslie isn’t the focal point of the story for most of the film, and the first of Edmunds’ two endings is the more emotionally satisfying one because it revolves around the better character.

Not only does Dead in a Week (or Your Money Back) put all of its emphasis in the wrong places, it perhaps more damningly doesn’t care whether William lives or dies. A dark comedy built around something as taboo and potentially triggering as committing suicide is always walking a trepidatious tightrope across a bottomless chasm of poor taste and bad decisions, but Dead in a Week (or Your Money Back) is so feeble and wishy-washy that it feels like that cable has been replaced by a titanium bridge set mere inches above solid ground. For a film built around a character that could theoretically die at any moment from a hollow point kiss to the back of the head, there’s astoundingly little tension. Long before the halfway point, it becomes painfully apparent that Edmunds’ material is simply spinning its wheels until it has to wrap up. By never building tension or filling the void with some risk taking laughs, Dead in a Week (or Your Money Back) remains inoffensively forgettable, but rarely entertaining.

Dead in a Week (or Your Money Back) opens in select cities on Friday, November 30, 2018. It’s also available on VOD the same day.

Check out the trailer for Dead in a Week (or Your Money Back):