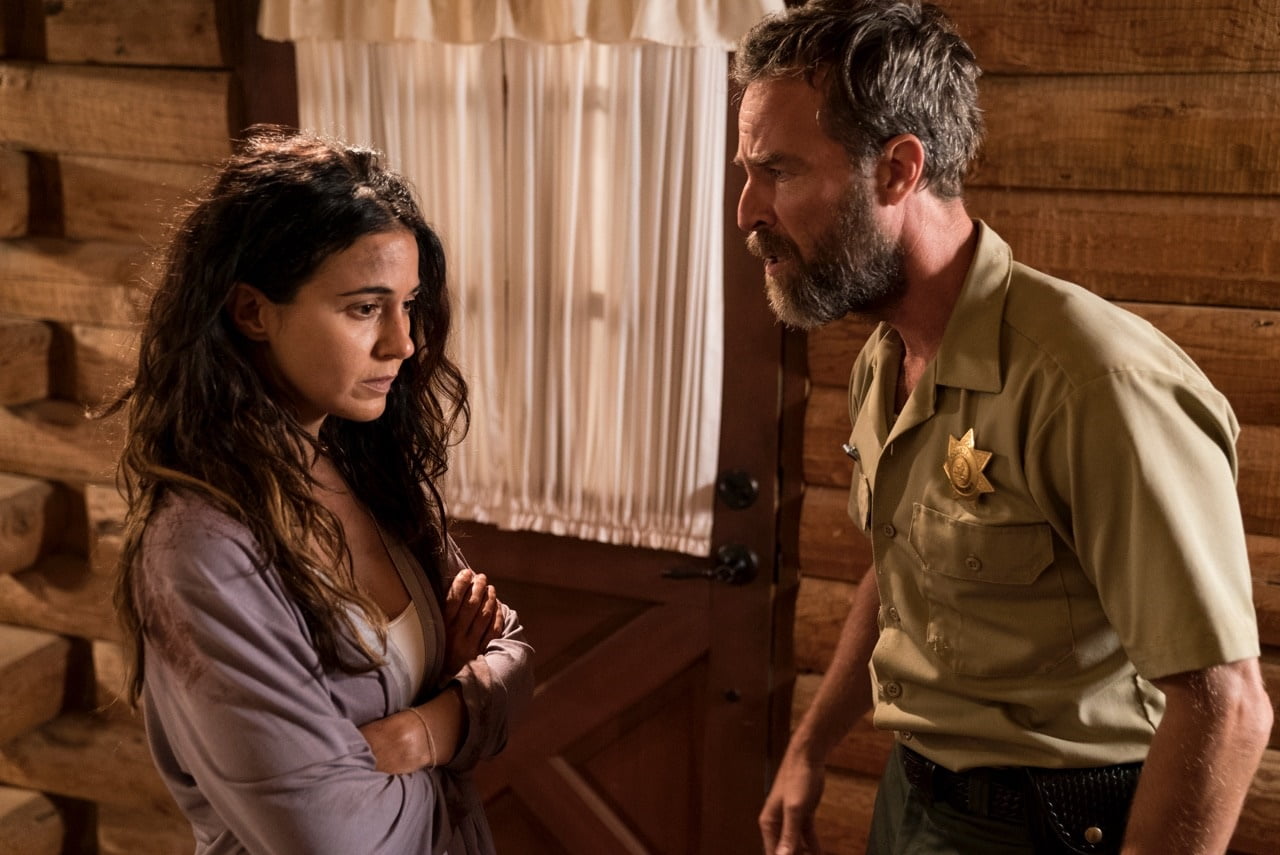 Harkening back to a form of thriller that’s been largely absent since the mid-90s, Hospitality isn’t particularly deep, insightful, or original, but it strikes as a nice change of pace from genre norms these days. Instead of offering up an overly gory and nasty survival thriller or a chatty, Tarantino-esque yarn, writer-directors Nick Chakwin and David Guglielmo are keen on making something more in line with the sun drenched neo-noirs of John Dahl or John Sayles. It’s not entirely successful in those aims, and Hospitality is the definition of a “slight” motion picture, but in an age where most indie filmmakers wear their 90s influences on their sleeves, there’s something quaint and refreshing about it just the same.

Emmanuelle Chriqui stars as Donna, a forty-year-old former prostitute who has successfully gone straight and legitimate after turning her home into a bed and breakfast. She lives on her relatively secluded and picturesque estate with her sweet, hardworking, and mentally disabled teenage son, Jimmy (Conner McVicker) and their pet bunny, Spider-Man. Shades of Donna’s past keep creeping up, however, thanks to the lecherous advances and shakedowns by the corrupt local sheriff (JR Bourne), who will make her life a living hell if he doesn’t keep getting a piece of the financial and sexual action. With business on the decline, Donna is thrilled to have a guest in the form of Cam (Sam Trammell), an ex-con recently released from prison en route to a new life. Donna learns that Cam is a former customer of her’s who’s also trying to leave his criminal past behind, and she quickly grows fond of him. What she doesn’t know is that Cam has arrived to retrieve a stash of stolen cash that he hid away in Donna’s walls shortly before he went to prison, and that it won’t be long until one of his former associates (Jim Beaver) comes calling for his long overdue payday.

With their second tandem feature Chakwin and Guglielmo have crafted a self-contained and well executed potboiler that won’t surprise anyone that’s ever seen a direct-to-video thriller from the latter half of the twentieth century. It’s all nicely done: the cinematography is better than average for this sort of production and story (including an ambitiously staged dinner table conversation dripping with passive aggression all around), the single location setting lends itself nicely to the story’s themes of isolation and absence of morality, and the dialogue is believable without being precious or needlessly referential. Hospitality knows exactly what it wants to do and how long it can play out before the audience will grow bored or restless. Hospitality is so precisely calculated that it almost comes across as something that’s been machine or lab engineered. Chakwin and Guglielmo are cribbing liberally from dozens of other similarly pitched thrillers, but at least they aren’t waving their arms and shooting off flares to signal anything they’re trying to pay homage to or reference. Like the filmmakers they most want to emulate, there’s a degree of subtlety to Chakwin and Guglielmo’s work that suits Hospitality well enough. 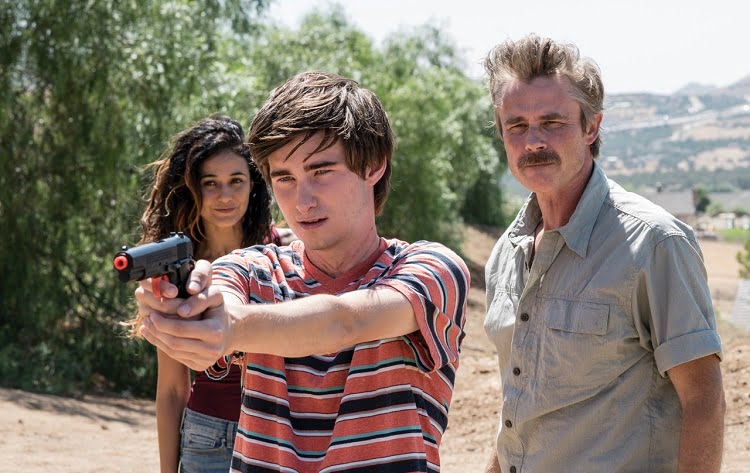 The performances help in elevating Hospitality to something slightly better than passably entertaining. I can’t remember the last time Chriqui was given the chance to play a character with actual layers, but she embraces the opportunity here, delivering what might be the overall best performance of her career. Donna is sympathetic, strong, and likable, but also more than capable of dealing with awful situations whenever they arise. It’s a wonderful character to build a thriller around, and it allows the Chriqui a chance to deliver a balanced, grounding, and commanding performance. She’s mostly the reasons Hospitality succeeds on the whole, but everyone else in the small cast of characters does their part to keep viewers invested. Trammell has some fun as the hard-to-peg down nice-guy-who-might-be-lying, while Bourne imbues his trainwreck of a lawman with a healthy dose of manic energy that stops just shy of going over the top. McVicker and Beaver display talents for understatement in roles that could’ve easily led lesser performer to overact, and their parts are nicely against stereotypical norms for their sorts of characters. Even if the story never fully catches fire, the actors and stylish direction keep Hospitality intermittently interesting.

Hospitality is the sort of thriller one would’ve expected Linda Fiorentino and Jeff Fahey to star in back in the day. It still would’ve likely gone directly to video before being promptly forgotten about; something no one would herald as a hidden gem or a debacle and would be labelled as “pretty good for what it was.” Outside of one somewhat ridiculous character revelation that should be made a bigger deal than it actually is, Hospitality doesn’t offer up anything too surprising or off putting. And that’s the problem. Hospitality is as safe and static as a thriller can get. It’s a movie that’s more technically and performatively interesting than exciting, scary, or even all that good.

Check out the trailer for Hospitality: