Master German filmmaker Margarethe von Trotta blends biography, analysis, and appreciation in her documentary Searching for Ingmar Bergman, a look at a fellow famous auteur that refuses to give in to idolatry or simplistic readings of a man’s life and works.  Examining the career of venerable Swedish filmmaker Ingmar Bergman in the year of what would’ve been his 100th birthday, von Trotta’s approach is relaxed, organic, exciting, and infrequently fawning. Speaking directly about her emotional and scholarly connections to Bergman’s work and sitting down with other filmmakers, critics, and people who worked with him over the years, von Trotta (working in tandem with co-directors Felix Moeller and Bettina Böhler) is more concerned with what his works meant to the people who viewed them and less about hard and fast theorizing or strict biographical details. Unafraid of portraying its titular figure as a bit of a bastard who would readily use psychoanalysis as a filmmaking tool but never parse his own complex attitudes and desires, Searching for Ingmar Bergman is both accessible for those unfamiliar with Bergman’s work and as resoundingly complicated as the man himself.

von Trotta begins by relaying a story about how a trip to a French cinema to view The Seventh Seal caused her to fall in love with film, and became a major contributing factor in her pursuit of a career in the medium. Years later, her connection to Bergman’s work would deepen when one of the most esteemed figureheads of the nouvelle vague movement would name her film The German Sisters (a.k.a. Marianne & Juliane) as one of his ten favourite films of all time; the only entry on his published list that was made by a female director. von Trotta’s feelings about Bergman aren’t merely aesthetic or educational, but deeply personal, and as a documentarian she seeks out people with like minded associations to the man and his work.

It’s perhaps best that von Trotta follows her own remarks by first talking to actress and muse Liv Ullmann, Bergman’s most frequent and intimate collaborator. No one worked with Bergman more than Ullmann, and she might be the person with the most scholarly authority to talk about his life and work (and indeed, she has also appeared in another great documentary about their 42 year long collaboration, Liv & Ingmar). Ullmann sets up the best talking points regarding Bergman’s legacy, but they’re wrapped in anecdotes and relaxed observations, with von Trotta adopting a laid back form of interviewing that feels more like intellectual chats among friends than stoic, staid documentary sit downs. With her own personal feelings already on display and the input of the collaborator most people associate most readily with Bergman out of the way, von Trotta is able to branch out into more adventurous territory. 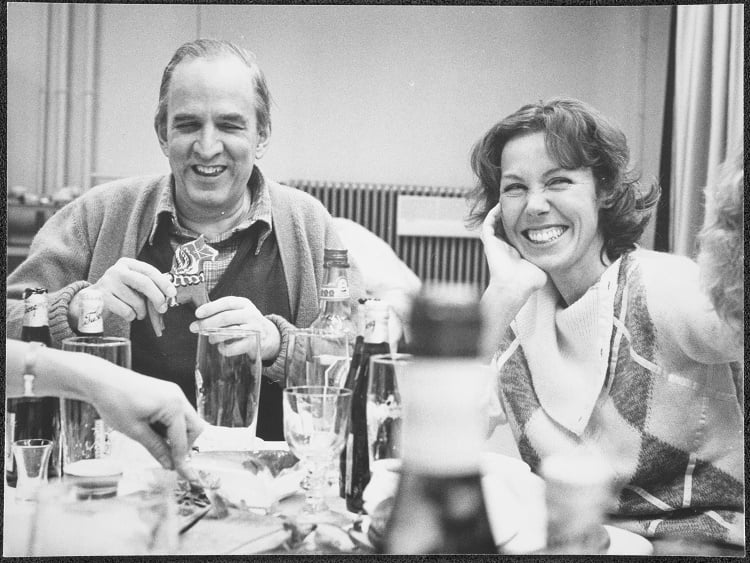 Searching for Ingmar Bergman assuredly curates all of the biographical details that matter into a single package: the hits, the failures, his recurring themes, his desire to be better regarded as a writer than as a director, attempts to adapt some of his films into plays, how his usage of religion as a storytelling tool drifted away the older he got, et cetera. Everyone interviewed by von Trotta adds a piece of the overarching puzzle, but it’s not what’s being said about Bergman by her interview subjects, and more how they’re expressing themselves. All of the actors, producers, archivists, and historians talked to by von Trotta are generally in agreement that Bergman was a creative genius, but some of them speak with unbridled enthusiasm and others with reservation.

French filmmaker Olivier Assayas, who co-authored a book of interviews with Bergman alongside fellow director and critic Stig Björkman, speaks with giddy enthusiasm about the time he got to spend in the presence of his aging idol. It’s a sharp contrast to the stories shared by one of Ingmar’s many children, Daniel, who loved his father, but isn’t afraid to speak critically about their collaborations or Bergman’s countless wives and infidelities. Searching for Ingmar Bergman is filled with the sort of contradictions that are often overlooked in most biographical documentaries or works of cinematic analysis and criticism. Although the greatness of Bergman’s best works are hard to dispute, von Trotta never pigeonholes her documentary to approach the Swedish legend from any singular point of view.

What emerges is an honest and purposefully untidy portrait of a complicated man. Bergman didn’t particularly care what people thought of him or his works, but he was appreciative of any accolades that came his way. He frequently looked to his dreams and those of others to colour his films with surrealism and magical realism, but he would balk if anyone were to confront him with hard truths about his own life. He struggled with mental health issues, but his films were a form of therapy played out in public, both consciously and unconsciously. Before his filmmaking career took off, he notably and regrettably thought that Hitler was a charismatic fellow. He loved working within Sweden early in his career, but later felt betrayed by the political powers that be in his country. For every noble cause and work of art Bergman produced, there was always something else happening that might cast him in an unfavourable life.

Ultimately, that’s what makes von Trotta’s Searching for Ingmar Bergman so uniquely humane. It does precisely what great biographies and works of criticism should do. It places everyone’s feelings about the subject at hand on a level playing field, presents them, and admits to the author’s own biases up front and in no uncertain terms. Searching for Ingmar Bergman never purports to be the be all and end all of Bergman studies, but it’s definitely one of the best.

Check out the trailer for Searching for Ingmar Bergman: