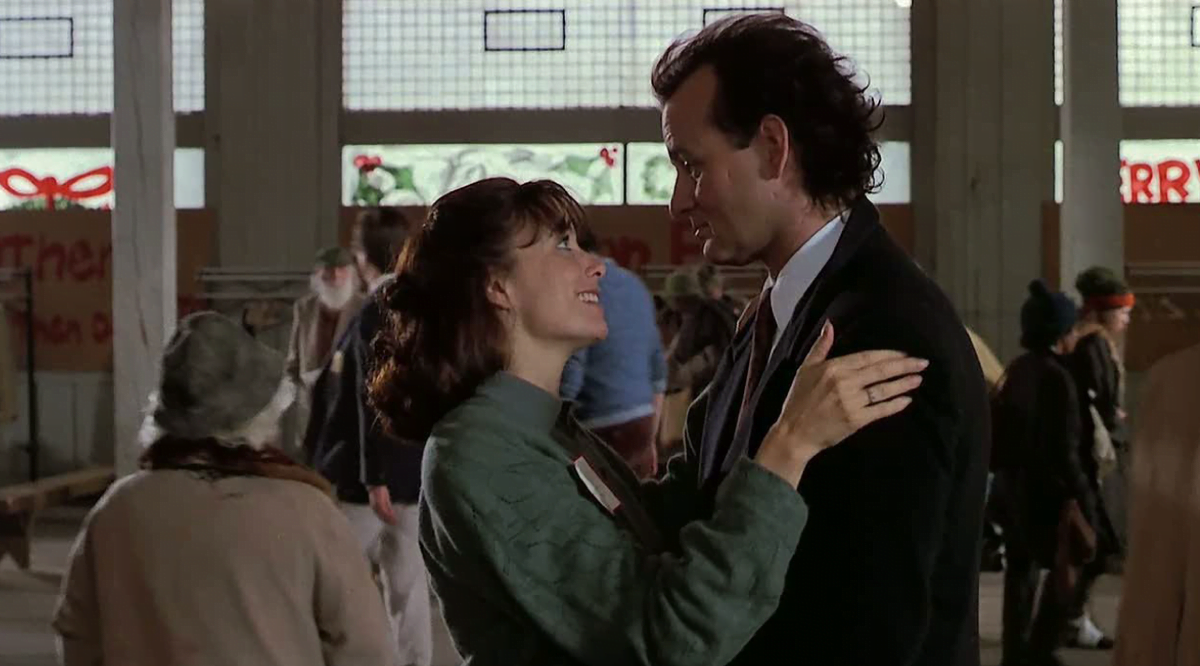 Scrooged is one of the best Christmas movies ever made, and it works so well because, next to Bill Murray’s eccentric, off the wall Frank Cross, there’s Karen Allen’s balanced, charming, and hopeful Claire Phillips.

Celebrating it’s 30th anniversary this year, Scrooged is an utterly charming, sweet, smart, and genuinely hilarious remake of Charles Dickens’ A Christmas Carol, but it’s so much more than a retelling of that story. Scrooged is a modern classic that has become a staple of the holidays.

On a call with Allen, I spoke to her about her thoughts on the film, both when she made it and remember it today, what it was like to work with Bill Murray, and a bit about her career.

Scrooged is available now on Blu-ray.

Andrew Powell: Thinking back on when you made Scrooged, what are some of the memories that stuck with you?

Karen Allen: Oh gosh, I think mostly what has stayed with me is just the pure fun that I had with Bill Murray and also with Dick [Richard] Donner. It was for me a new freedom, a new way of working because Bill, being in the tradition of a great comedian, he had a way of approaching a script and his team that was quite different than anything I had done, certainly on film before.

So, I think that’s what sticks with me most, is Bill coming as an actor who came out of the theater where you memorize every single line, and every single word has to be what the playwright wrote. It’s just not allowed, you’re not allowed to change words. Suddenly Bill was very freewheeling, and he used the scene, or what the written word as a springboard for what was going on in the scene, and really didn’t want to settle into the language.

And certainly, if we did eventually say the lines that were in the script, he wanted to start by doing a lot of improvisations and end up there, which was great fun for me. You just sort of throw away all the traditional approaches to a script that actors normally have, where you have to be very word perfect. That’s what I remember the most, is that it was the first time I think I’d worked on a film where the script was not sacred.

Powell: Did that make it easier or harder? Because I imagine from some perspectives that must’ve been actually harder.

So, I think we’re all chomping at the bit to do something where we don’t have to be that confined. So I think there were probably times when it was a little challenging for me, but for the most part it was a lot of fun, and very satisfying.

Allen: He’s a very high energy person. He’s somewhat unpredictable. He’s very extroverted and very introverted at the same time. And you very rarely meet a person who has those two aspects to them so solidly there.

There were times when he just would keep to himself, and wanted to be in his own space. And there were times where he was just the most warm, and sweet, and cuddly, and fun, and outgoing and, “Come on, let’s go have lunch.”

So for me, I had met him maybe a year before. I probably had run into him in the Animal House days, when I was working and hanging with some of the Saturday Night Live” folks. But I finally got to know him a little bit when he was going to work with a Shakespearian company that I had worked with, and he was meeting with the artistic director, and some of the people involved with the company to talk about doing some of the great Shakespearian comedic roles on stage. Which I don’t think ever came to pass, but we had dinner one night. And in fact, I think I had dinner with him a couple of times. And he was very entertaining, and very charming, and a lot of fun in that context.

And so when I came to audition for the film, we had a little bit of an ease with each other, that I might not have felt had I not already had spent some time with him.

I think he’s exactly how one would imagine him being, if you know his work, if you’ve watched him on Saturday Night Live, or you’ve watched him [on anything else]. He is that person that we know, and then there’s like a very private part of him that really I think gets tired of being that person.

I have a feeling that there may be a bit of a hermit in him also. He is a very extroverted guy, but then there’s like a part of him that really needs to retreat from all that.

Powell: I can imagine. Well, Claire is such a pure soul, and she’s so forgiving, and kind and honest. Considering I heard that there were a lot of script changes, was she always that kind, and forgiving, or did that change at all during filming?

I mean, I think it’s perfect that they knew each other when they were young, and since she’s become a social worker, and he’s become this wealthy TV exec. And I think the actual trajectory that they create for those two characters in terms of how they went apart in their life and then how they accidentally come back together, is just great.

But now my character I think is very close to what was on the page, what Michael O’Donoghue and Mitch wrote. They wanted her to be everything I think that’s what Dickens’ wrote. She was this pure person who really believed in the goodness of people. And so that was fun. It becomes a great foil for him, in a sense.

Powell: I want to know, after you saw Scrooged, what did you think of it, and did you think it was going to become such a classic? Because for me and my generation, it’s easily number one or number two, certainly for the last 30 years.

Allen: I don’t know that we really thought about it much when we were doing it, I guess because it is a version. You feel like if you’re going to mess with something like A Christmas Carol, it better be good or it’s either going to crash and burn, or hopefully it’s not. Hopefully people are going to really enjoy it, and have fun with it.

I was actually thinking about it this morning, like, did I remember when I first saw it? And I’m not sure I have a memory of. They probably screened it for me and I saw it, but I think I loved it when I saw it.

Because of the way in which my character is mostly only in scenes with Bill, there’s a little bit of crossover here and there. So I had never seen any of the stuff that was done with Carol Kane. I’d never seen a lot of David Johansen stuff. I’d never seen the Bob Goldwaith stuff. I’d read it in the script, but of course, reading it and then seeing it come to life is…

So, I just remember being delighted at all kinds of aspects of the film I hadn’t seen, I didn’t know were there.

Powell: Well thank you very much for the time. I really appreciate it. It’s really an honour to speak to you.