Review: The House That Jack Built 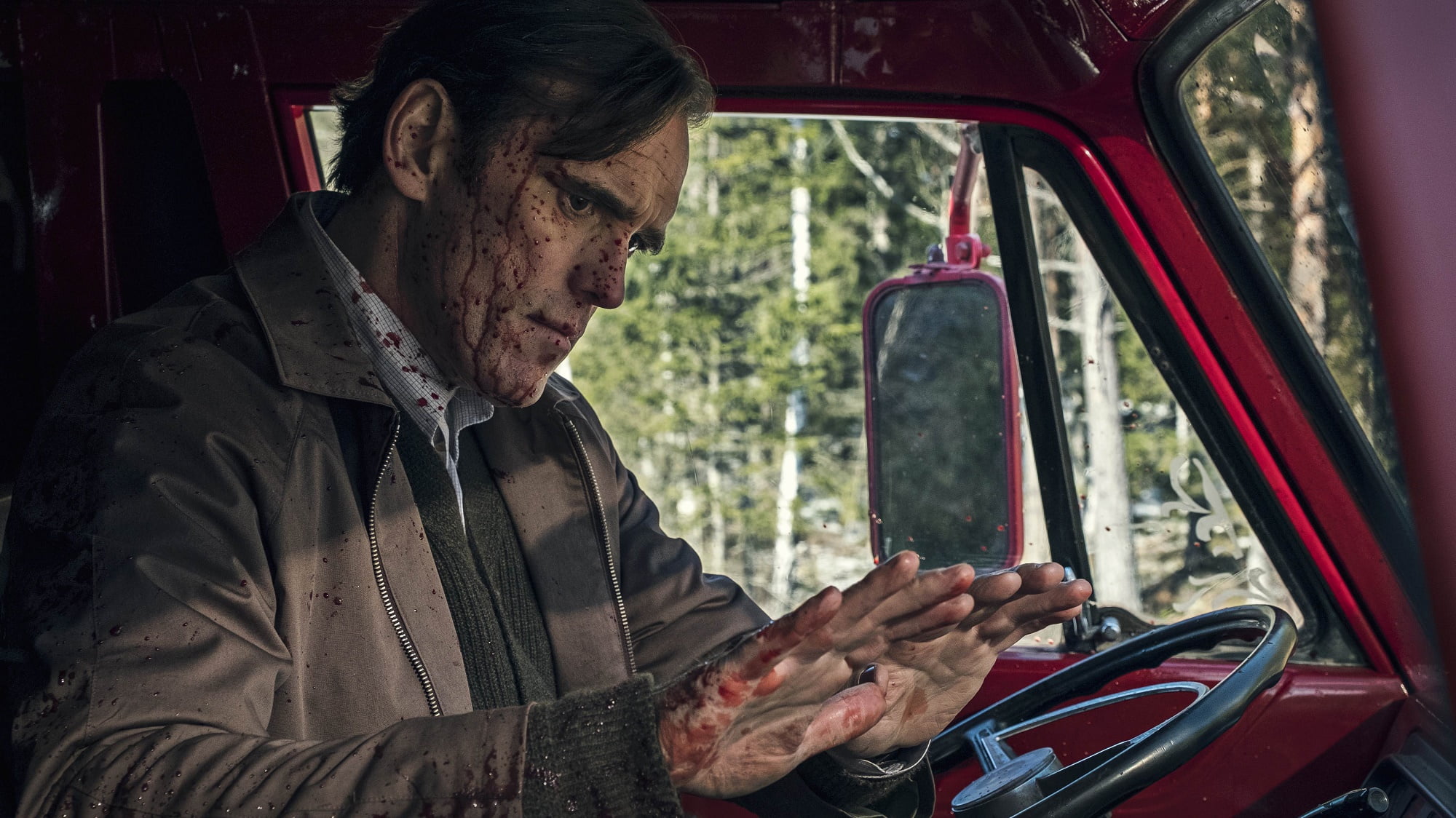 The House That Jack Built, the latest film from controversial Danish auteur Lars von Trier, isn’t so much a motion picture as it’s a confrontational, baffling, effort ridden, messy, and somewhat pitiful cry for help and forgiveness from the person who created it. Since Melancholia in 2011 (which remains one of his best efforts), von Trier has been doing everything in his power just short of blowing up a building to be noticed as a provocative shit disturber and outright troll who also wants to be loved and taken seriously as an artist and human being (which is pretty tough to do when one considers how greatly his off screen exploits overshadow anything he’ll create from here on out). The House That Jack Built is a film so self-analytical and rigidly exploitative that it’s nearly impossible to take it seriously as art or apology. It’s often said that great art is often made simply to appease the person that made it. The House That Jack Built isn’t particularly good art, but von Trier can keep it just the same (which is probably what he wanted out of this, anyway).

Divided up into five “incidents” (just like von Trier attempted his own “five obstructions” experiment, in case you missed how on-the-nose this whole affair is), The House That Jack Built is told from the perspective of the titular serial killer – played by Matt Dillon – as he converses with a boatman of sorts (Bruno Ganz, who’s heard but not glimpsed before the final movements and is basically playing Virgil, but Jack calls him Verge) who’s ferrying the murderer to his circle of hell. Jack, a frustrated engineer who dreamed of becoming an architect and building his own house in the American Pacific Northwest during the 1970s and early 80s, looks back on his desire to create works of art from his murders. Frequently targeting “stupid” women of “lesser intelligence,” Jack’s persona, artistic leanings, and outward appearance as a slightly off putting human being might change from time to time, but his ultimate goals never waver.

Much like von Trier, Jack, who has cheekily dubbed himself as “Mr. Sophistication,” is an experimenter. The House That Jack Built cycles through the spur of the moment killing of an entitled, berating woman (Uma Thurman) who has broken down on the side of the road, a botched and amateurish home invasion, the wholesale slaughter of an entire family, the murder of a woman Jack attempted to have a relationship with (Riley Keough), and a technical experiment where the “protagonist” attempts to achieve a number of headshots with a single bullet. These recollections are graphic, but unsurprising by von Trier standards, and most of them are staged so Jack and Verge can have lengthy, distancing discussions about philosophy, art, and history. They’re also references to other von Trier films that are so blatantly obvious that they almost seem to be actively punishing anyone who has sat through, enjoyed, or found merit in any of his previous works.

The House That Jack Built isn’t a hard movie to follow along with on a narrative or artistic level, but it’s impossible to make sense of it on a thematic one. Whatever von Trier thought he was trying to say about art, man’s inhumanity to man, or his own reputation as a divisive enfant terrible, he’s failing at it because he’s creating nothing more than two and a half hours of meaningless contradictions. (Note: this review is based on the longer, unrated director’s cut, and not the edited down, rated version that will be released theatrically in some cities around the world.) Is Lars attempting to confront his own self-sabotaging nature or is he knowingly faking empathy? Ultimately, the answers at the heart of The House That Jack Built are “Who cares?” and “Fuck you for even trying.” 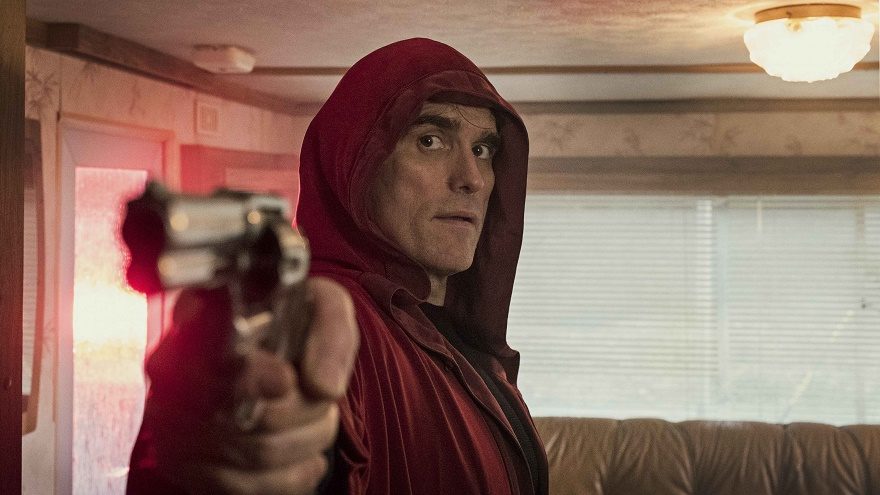 The House That Jack Built finds von Trier equating artistic analysis to acts of violence, equally crapping on the notion that anyone should dare question his vision and integrity, while simultaneously engaging in acts of such criticism as if it were self-flagellation. It’s painfully unambiguous that Dillon’s psychopath is von Trier’s avatar here, and the surface level reading of the material is only hampered by the writer-director’s need to explain and spoon feed every tiny detail and nuance to the viewer in no uncertain terms. As a filmmaker, von Trier has never been known for subtlety or restraint, and sometimes that approach has served him well. Here, The House That Jack Built becomes an aggrandizing, narcissistic, and treacherously unfunny work of self parody. It doesn’t tell people who’ve followed von Trier’s career anything they don’t already know about his works, and it only affirms his detractor’s views that he’s an enormous shithead. Whatever you think of von Trier going into The House That Jack Built is exactly what you’ll leave the film with, and you’ll be hard pressed to give a damn about what’s happening within the margins unless you too love the sound of your own voice.

Every increasingly monotonous, but competently executed sequence in The House That Jack Built is analyzed to death by Dillon and Ganz’s duelling, metaphorical, psychoanalyzing narrators, and von Trier’s material quickly descends into coldly distant tedium that’s almost too self serving to be offensive. In parallels to von Trier’s career, Jack talks at great length about constantly destroying and rebuilding his creations, his abhorrence for staginess, how he finds women easier to work with (and manipulate) than men, how he thinks human beings have lost the ability to care, the differences between writing and performance (using Glenn Gould and Nazis as recurring examples), and his distaste for censorship. The actual form of The House That Jack Built is so dull and static (with predictable handheld cinematography and frequent close-ups) that the film is useless beyond listening to the rantings of the person who created it. It’s a C-level podcast set to a handful of shocking images centred around 4am conversations that happen in less than reputable dorm rooms everywhere. And it all ends with a joke, because of course it fucking does.

If there’s one reason to sit through The House That Jack Built, it’s for Dillon’s admittedly exceptional leading performance. Changing his appearance, tone, and general attitude between “incidents,” Dillon’s performance is uniquely layered, even if he’s only portraying different versions of von Trier from across the auteur’s career. Maintaining more or less the same general monotone with bursts of righteous fury, Dillon has actually managed to create five main characters and not just one, which is an appropriate take on the traditional notion of the chamelionic serial killer. He’s riveting to watch, even when the rest of the film is enough to make any knowing viewer’s eyes roll into the back of their skulls.

As a work of unbridled trolling, The House That Jack Built is an unqualified success, and while I’m sure that’s at least part of von Trier’s intention, he fails at everything else he attempts with this one. Instead of being naturally funny and abrasive, von Trier’s anger and indignity turns The House That Jack Built into a “woe is me” diatribe that stops short of begging for forgiveness and instead pleads for a sense of understanding. And then he stops on a dime and tells you to fuck off for trying to meet him on his level. It’s like trying to talk to a confrontational blackout drunk with a persecution complex who’s going through an acrimonious divorce as a result of them cheating on their spouse. It’s a lot to take in, but all of it is pointless and fruitless.

The House That Jack Built is available in Canada on iTunes and VOD on Friday, December 14, 2018.

Check out the trailer for The House That Jack Built: