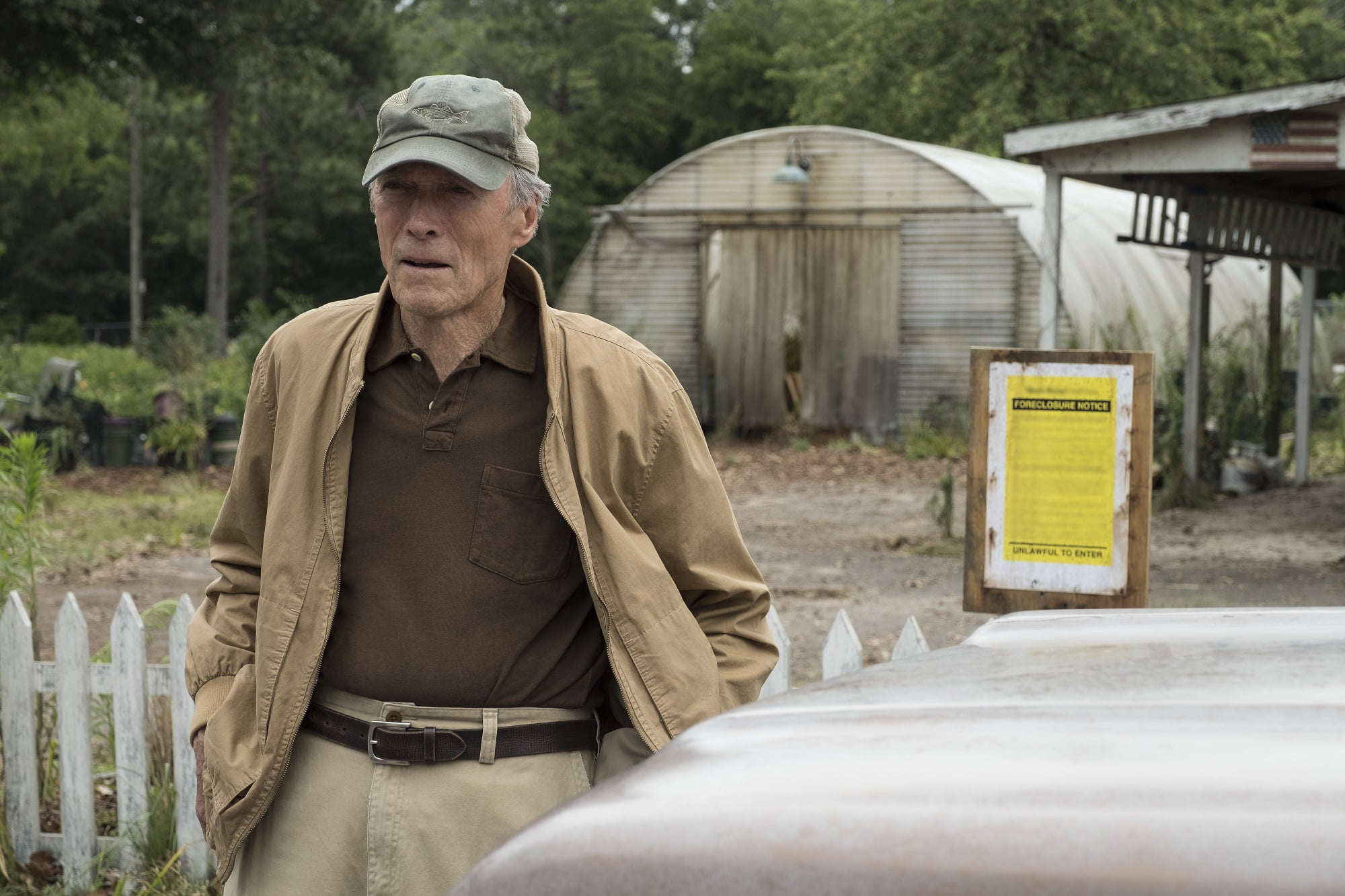 While The Mule won’t go down as aging auteur Clint Eastwood’s best outing as a director, it will assuredly be remembered as one of his most interesting and daring roles as an actor. Pulling double duty behind and in front of the camera for the first time since 2008’s Gran Torino and taking on his first starring role since The Trouble with the Curve in 2012, Eastwood displays that he has a few new tricks up his sleeve as a semi-retired actor, delivering a type of character and performance different from anything else in his career. As a director and storyteller, however, The Mule is a somewhat standard and rather slight effort that suffers from a lot of the same rough edges and miscalculations present in late period Eastwood efforts. It’s a mixed bag on the whole, but overall it’s Eastwood’s performance that makes The Mule more transfixing than it probably would’ve been otherwise.

The Mule reteams Eastwood with Gran Torino screenwriter Nick Schenk (who’s also responsible in part for The Judge and a couple episodes of Narcos) for a true story based on an article from The New York Times Magazine by Sam Dolnick about one of the oldest and most improbable drug runners in history. Earl Stone (Eastwood) is pushing ninety and in dire financial straits. His once blossoming career as a prize winning horticulturalist has bottomed out thanks to the internet killing his chances to make sales, and his Peoria, Illinois farmhouse is on the verge of foreclosure. Suddenly, he’s regretting the career decisions that led to a divorce from his ex-wife (Dianne Wiest) and estranged him from a daughter (Alison Eastwood) that now refuses to talk to him after he blew off her wedding for a plant competition.

Out of options and with few tangible skills other than a green thumb and a squeaky clean criminal record that hasn’t netted even a single traffic or parking ticket, Earl is introduced to a money making opportunity “delivering packages” for some shady types operating out of an El Paso tire shop. After a few trips where he’ll leave his truck unguarded for someone else to come around an pick up the baggage stashed in the bed, Earl finally confirms that he’s been moving large amounts of cocaine. Instead of walking away while he still has somewhat of a choice, Earl continues making runs for a powerful cartel because the money is too good to pass up. With his illegal and increasingly ambitious gains, Earl is able to get his property out of hock, help out friends in need, and provide for his granddaughter (Taissa Farmiga) in ways he never could before. Earl’s unassuming appearance, unpredictability, and unorthodox style of transporting goods across state lines makes him a favourite of his kingpin boss (Andy Garcia), but internal cartel disagreements and a hungry DEA agent (Bradley Cooper) hot on his trail will force the old man to reconcile his life choices once again.

What’s most striking about The Mule from the start is the fact that Eastwood, for the first time and pretty much only time since The Bridges of Madison County, is playing a character without a shred of machismo in him. Adopting a shuffling limp and a shaky voice that’s in a higher register than Clint’s normally gravelling voice, the actor turns his latest flawed protagonist into more than a bit of a wimp. Instead of someone who’d be well prepared for stressful or extreme situations, Earl Stone is someone who looks like they could pass away at any time. He’s exceedingly frail, only somewhat assured of his abilities, and desperate to make money and be well liked doing it. It’s a fascinating role for Eastwood to take on, and it’s easy to see why he’d be enticed to take it on after saying years ago that he was done with acting. It’s both age appropriate and a potential final chance for Eastwood to push himself in new directions as an actor. It probably helps that he’s able to frame and shape the character through his direction, but The Mule takes more cues from Eastwood the actor than it does from Eastwood the director or storyteller. The leading performance and Clint’s finally tapped reserves of vulnerability are more transfixing than the wobbly film built around it.

The script from Dolnick is a few passes away from being completely workable, but that’s probably more Eastwood’s fault as a director than it is the writer’s. For decades now, Eastwood has worked as quickly and efficiently as possible behind the camera, often taking on first drafts of screenplays to shoot without second passes or rewrites, and only doing single takes of scenes before quickly moving on to the next sequence. The Mule suffers in the plot department thanks to some scenes that feel like they’re playing out in an illogically spaced out fashion and somewhat out of order, but never to a point where it’s more annoying than noticeable. 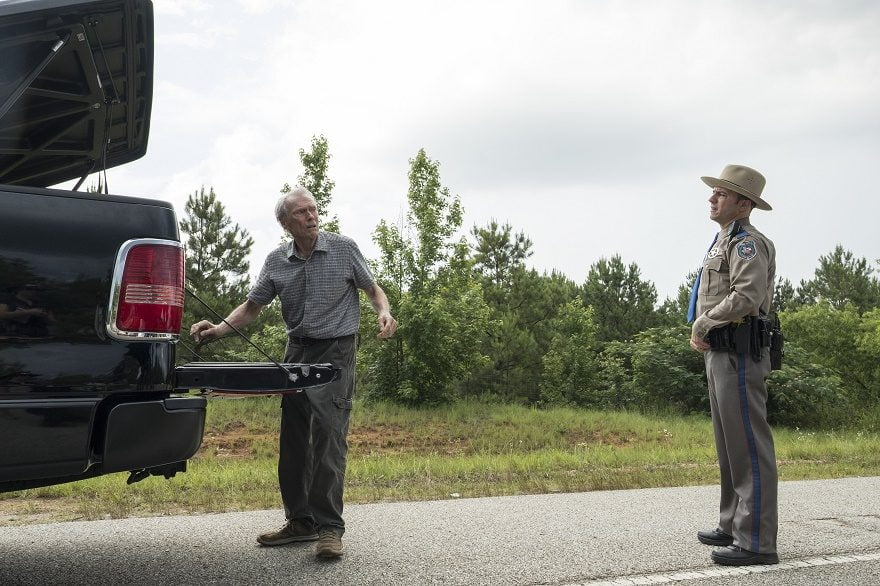 The single take shooting style works well for some of the film’s stacked cast of character actors (notably Farmiga, Cooper, and Michael Peña and Laurence Fishburne as fellow DEA agents) and less successfully for others (Wiest, Eastwood’s on and off screen daughter, and Garcia). Sometimes scenes of meaningful dialogue and revelations will be punctuated by the wrong kind of awkward silences for such sequences to resonate; moments where it feels like an actor is searching for a line and not like a character is thinking of the right words to say. It’s not that Eastwood can’t make something like The Mule work well enough on its own, but rather that a different director probably could’ve turned this into something exceptional with a bit of extra heavy lifting. Instead, The Mule is a passably good and somewhat flat motion picture from a veteran director that’s become set in their ways.

Unlike the more experimental, somewhat unjustly derided, but still not great The 15:17 to Paris from earlier in the year (which seems to get a loving nod from Clint here in a lengthy moment where Earl eats an ice cream sandwich while singing along to oldies playing on the radio in his truck), The Mule doesn’t see Eastwood breaking out of his comfort zone as a director, and instead relying on the depictions of hard working Middle American folks that he knows best. His first collaboration with Quebecois cinematographer Yves Bélanger (best known for his recent work alongside Jean-Marc Vallée) is rather workmanlike, netting a handful of great shots, but nothing exceptionally outstanding. For a story that’s ostensibly a thriller, The Mule has a curious editorial sensibility that often sucks tension out of the material just as it should be ramping up to something more meaningful and dangerous, sometimes offering moments of unintentional laughter from the sheer awkwardness of it all. And any character that isn’t Earl is essentially one note and thankless (even Cooper’s, which is somewhat shocking to behold given the star power he currently commands). Outside of Earl’s exceptionally realized humanity and Eastwood’s performance in such a role, there’s not much else holding The Mule together.

There are also a handful of cringe inducing, out of place moments that further sour The Mule, making it feel like an orchestra that has to start and stop their performance because a single instrument has become wildly out of tune. While it’s understandable that Earl would be cantankerous about people always being on their cell phones, there are a few too many scenes of the old man fumbling his way around a smartphone or castigating everyone around him for using their mobile devices. There are also some blatantly offensive nods to folks from “a different generation,” where the ostensibly helpful and friendly Earl awkwardly and all too cheerfully calls a lesbian biker gang a bunch of dykes (which is somewhat okay, I guess, since that’s how they introduce themselves and it’s in the name of their club), refers to a black family with a flat tire as “negroes” (which is excused, I guess, because they correct his use of language), and calls his cartel handler (Ignacio Serricchio) “a beaner” to his face in jest, just before a scene where the character sweet talks a cop out of not questioning his Mexican friends by making it sound like they were day labourers he picked up outside a Home Depot.

Perhaps the worst of all these scenes, however, doesn’t even involve Clint, although The Mule curiously makes time for the increasingly successful Earl to have not one, but two separate threesomes with vastly younger women (something I’d never expect from a late Eastwood production, to be fair). The worst moment is a scene involving Cooper and Peña that openly makes fun of the notion that anyone would be scared of facing law enforcement during a traffic stop. That’s almost more offensive than the already dodgy racial stereotyping going on, but at any rate these moments are uncomfortable without providing further context. You can be politically incorrect if you want to subvert something or if you have a point, but such moments seem to only exist in The Mule because Eastwood finds them amusing and wants them there, despite the fact that they serve absolutely no purpose whatsoever other than to slow the film’s momentum.

As a character study, The Mule works reasonably well. As a showcase for Eastwood’s undervalued talents as an actor, The Mule is an unqualified success. As the latest entry into Eastwood’s filmography as a director, The Mule occupies a space in the mushy-middle of his career output. It’s hit-to-miss ratio as a reflection on an America where the elderly aren’t able to comfortably retire hovers right around fifty percent, but the moments that work well are memorable thanks to the Eastwood’s capable leading performance. It’s certainly far from Eastwood’s worst or laziest picture, but The Mule makes one wonder if it could’ve been better if anyone other than its star had directed it.

The Mule opens in theatres everywhere on Friday, December 14, 2018.

Check out the trailer for The Mule: