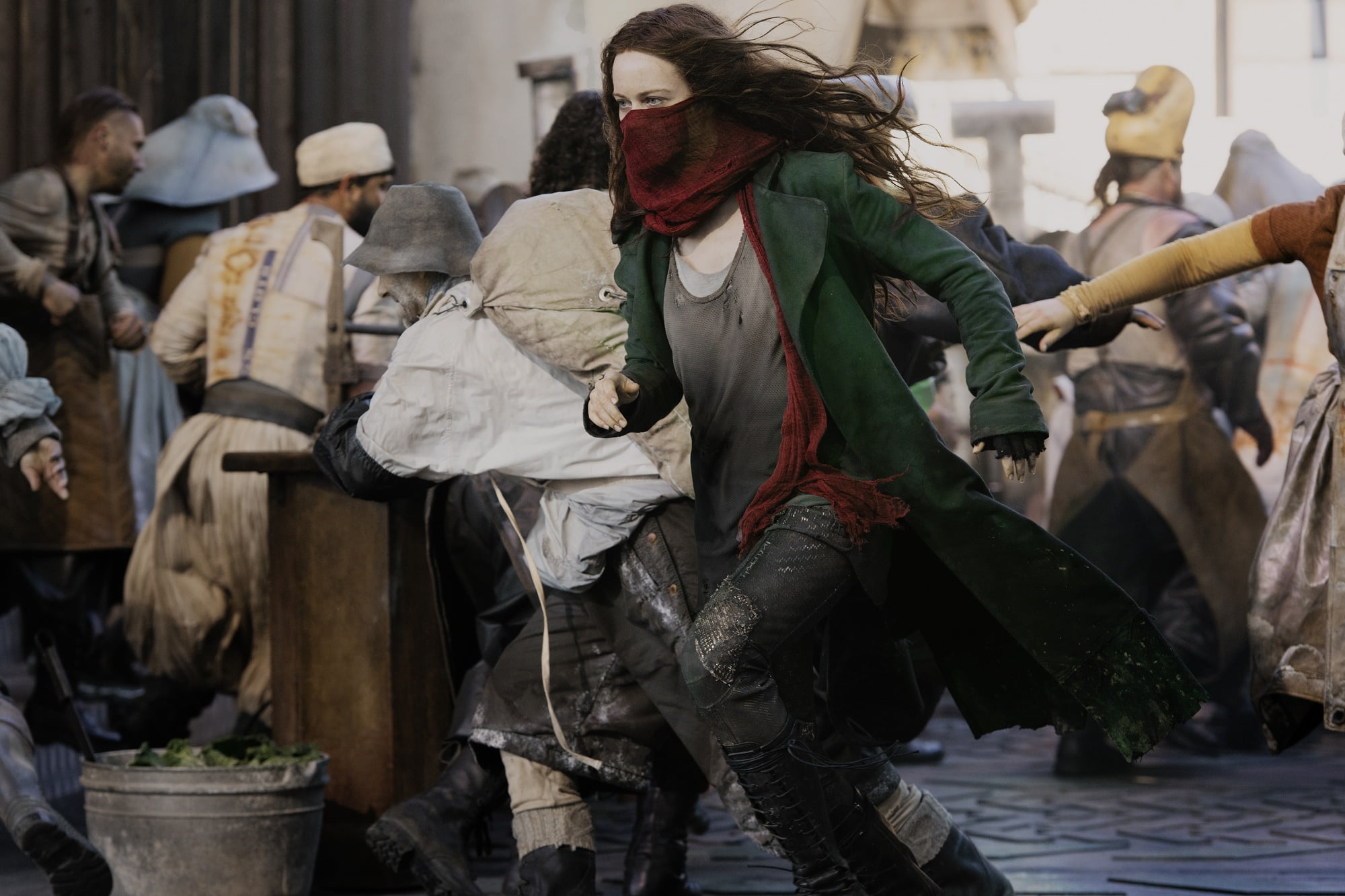 A soulless cavalcade of empty spectacle and cacophonous noise, Mortal Engines is one of the dullest, least involving, hollow, and crass attempts at franchise filmmaking ever attempted. Although it’s based on a series of bestselling young adult novels by Philip Reeve and it has been adapted for the big screen by Peter Jackson and many of his longtime creative collaborators, Mortal Engines is a film made for absolutely nobody. It’s the kind of plodding, leaden experience that makes me wonder retroactively if I was too hard on the likes of Michael Bay’s Transformers sequels, The Maze Runner movies, and the recent Robin Hood remake that promptly came and went from the cultural consciousness. At least those films had something worth talking about, and outside of an impressive visual effects budget that probably could’ve erradicated world hunger for six months or funded a hundred vastly better motion pictures, Mortal Engines doesn’t have a single thing going for it. It slides in just under the wire to shoot almost to the top of the list of the worst films of 2018 and will be remembered by me personally as one of the most excruciatingly boring and confounding times I’ve ever had in a cinema.

It’s sometime in the 3100s, I think. It’s definitely past the year 3000, although Mortal Engines never specifies this. I know only because at some point the main characters chow down on a package of Twinkies (or more specifically a vaguely branded knock-off) and a remark is made that the expiration date is over a thousand years ago, sometime in the 2100s. Anyway, as is to be expected by that time, Earth has gone to hell after a super-weapon caused the planet’s crust to shatter into millions of pieces in something called the “Sixty Minute War.” We don’t know what started the war, specifically, or what it’s significance is to society. We only know that it was triggered by a weapon that the film’s villain, Thaddeus Valentine (Hugo Weaving), wants control over, and he’s trying to track down the ancient technology to take control over it.

You see, in this future, cities, towns, and villages are enormous, nomadic, steampunk-like tanks that roam the countryside. No one once explains why these cities can’t simply terraform the land once again, nor do they explain how such monstrosities function or are created in the first place. Viewers are simply launched into a world where all this happens without rhyme, reason, or explanation and are told to accept it, knowing only that Valentine is one of the chief… I dunno, scientists? Engineers? Power company consultants… I actually don’t know how to properly describe the villain’s job here, but just know that he’s bad, influential, and important, and that he’s made the city of London grow by fortifying its defenses and literally gobbling up and assimilating any smaller communities that happen to come across its path.

That bit of cultural commentary is the only great thing Mortal Engines has going for it outside of its intricate visual effects. As a Brexit parable, Mortal Engines almost works despite its overwhelming incoherence and inscrutability. Watching mindless masses of citizenry cheering in unison as London overtakes another peaceful community and further insulates itself from the outside world – hoping to make the rest of Europe fall in line with its whims – is nothing if not timely. It’s not as impressive as storyboard and pre-visualization artist and first time director Christian Rivers’ technical mastery over the intricate and visible moving parts of the cities, but it’s literally the only other thing in Mortal Engines that warrants even a shred of praise. Even then, both elements are almost too good for something this atrocious.

The main plot – inexplicably written as direly as possible by Jackson and collaborators Fran Walsh and Philippa Boyens – revolves around Hester Shaw (Hera Hilmar), a physically and mentally scarred young woman who’s spent years plotting murderous revenge against Valentine for killining her archaeologist mother, teaming up with an outcast museum worker named Tom (Robert Sheehan) to put a stop the “traction city” from waging war on benevolent “static settlements.” This entails a lot of running around in “the outlands” and meeting up with far too many one-note and one-off characters for a single film to sustain without breaking. Once Hester and Tom (played by a pair of charisma-free leads) are off on their quest to get back to London and stop Valentine, that’s about the point where I’m unable to untangle the absolute mess that is the plot of Mortal Engines, and considering that the film was nurtured and produced by most of the same people responsible for The Lord of the Rings and The Hobbit films, it’s Jackson and only Jackson who’s really to blame for this outright and potentially career crippling debacle. (Although, I will note that Jackson has an exceptional documentary coming out later this week, They Shall Not Grow Old, and I have no intention of even slightly mentioning this thing in my review of that.)

Moral Engines keeps piling on characters and MacGuffins like Wal-Mart shoppers fighting for deep discounted towels on Black Friday. They all have a purpose, like Jihae’s resistance leader, Stephen Lang as a terrifying looking undead cyborg thing who’s tracking Hester for personal reasons, and Leila George as Valentine’s increasingly skeptical and suspicious daughter, but most of the people Mortal Engines introduces the audience to don’t do a single thing of importance and their overall function is nil. It’s a cast of characters that needs provided written material in hopes of ever deciphering, and the plot requires a road map of its own to remind viewers where they are at any given moment. After only thirty minutes of movie it’s apparent that none of these people, their struggles, their plights, or their functions are worth a goddamned thing at all. They’re just there to take up space and deliver meaningless, abysmally written dialogue. It’s also delivered with scant shreds of levity. Outside of a joke about people worshiping The Minions as deities and a bit where a guy gets his head blown off and his toupee hangs in the air for a brief second, Mortal Engines is laughably self-serious in the extreme.

Eventually, after about an hour that feels like two lifetimes and being plunked headlong into a fantastical story devoid of any necessary context or empathy, Hester’s backstory is awkwardly and lugubriously explained in two separate flashback sequences, but no one else is afforded the same courtesy, so we’re left to more or less guess why they’re important to the story, and we’re assuredly never given any reason to care for their survival outside of the fact that the loss of human life is inherently bad. None of these people are remotely interesting or worth following, their functions are interchangable, the leads couldn’t create a spark of chemistry between them if they were standing in the middle of a raging brushfire, and all of this nothingness takes a backseat to the impressive and oppressive visual effects that start to all look the same after only a matter of minutes.

Mortal Engines is already as boring as a film can get, but it moves at such a painfully and needlessly slow pace that I almost didn’t think I would be able to make it through the entire film. I can’t remember being more depressed about my job this year than looking at my phone, thinking that Mortal Engines had to be close to over, and realizing to my dismay that there were still seventy minutes of babbling, incoherent nonsense remaining. The only white-knuckles here were the ones developing when I had to grip my seat to keep from bolting out of the theatre.

By the time the film reaches its punishing, bombastic, nearly forty minute long action sequence finale (which comes at the expense of ever explaining precisely what the fuck is going on here), I had mentally checked out. My brain was broken, and I had stopped engaging with anything that was unfolding on screen. I’ve seen films by knock-off artists over at The Asylum better than this. I could visually figure out what was happening, but damned if I could explain the significance of any of it. And unlike other terrible films where my mind might drift to other topics outside the cinema or thoughts of better movies, I felt completely cold and empty sitting through Mortal Engines. I have never felt less about a movie than I felt watching Mortal Engines. I wasn’t mad or confused by that point. I was just there, occupying a seat, letting this film have its way with my eyeballs. I had become an empty vessel.

I fucking hate Mortal Engines, and I don’t say that lightly. There’s no way in hell Mortal Engines is as incompetent and scattershot as a series of novels as it is as a film. It can’t be possible, so if there’s one positive to be gained here, it’s that Jackson made me curious about the source material. And the fans of the novel better not say that Mortal Engines only makes sense if you’ve read the books. That’s no excuse whatsoever to create a film this expensively hollow and barren. It makes one think about other similarly confounding and slippery genre efforts like Cloud Atlas and Dune, but not in a favourable light. Those films had genuine ambition and emotion behind them that made them endearing in spite of their overwhelming flaws. Mortal Engines simply has a chequebook.

Check out the trailer for Mortal Engines:

Now that I have seen “Mortal Engines” and “Aquaman”, I can see that I am in the very low minority who preferred Mortal Engines. It was a better movie, plain and simple. It had a better plot. Aquaman was good, but really, who cares about underwater people killing each other. They’re under water, after all.