Review: Ben is Back 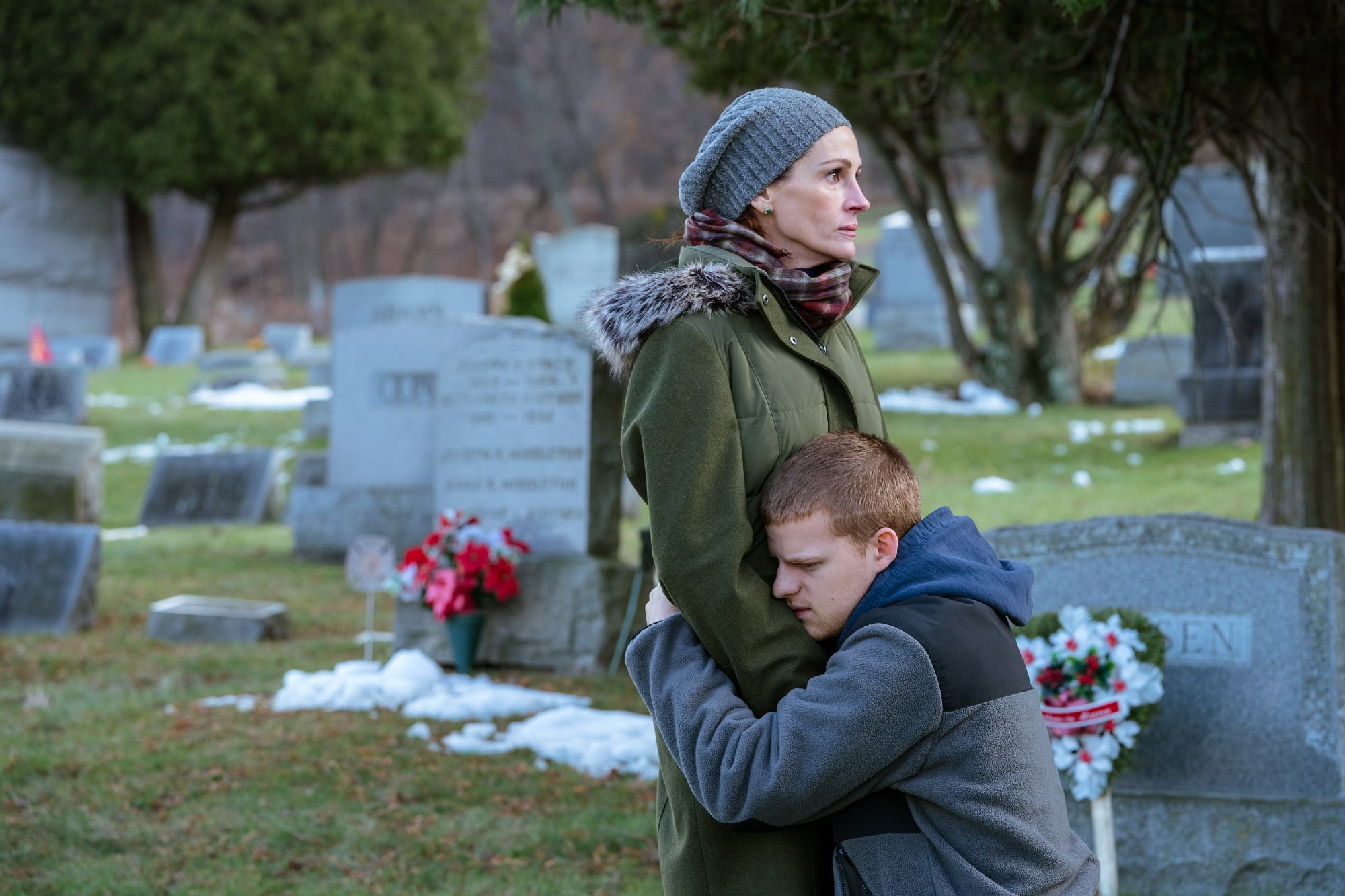 Although it might be misread by some as a crowd goosing melodrama, Peter Hedges’ Ben is Back is a moving and often painfully realistic depiction of a family coping with the addiction issues of a loved one that feels like a vital and gut-wrenching piece of cinema tailor made for the current opioid crisis. Considerably better and more assured than Beautiful Boy was earlier this year (which was mostly about meth and not opioids, anyway), Ben is Back might have some convenient storytelling flashes, but it’s all in service of complex emotional portrayals of how addiction can tear familial relationships apart in a number of different ways. The fact that it also boasts two of the year’s best performances from Lucas Hedges (son of writer-director Peter) and Julia Roberts feels almost like icing on a cake that’s purposefully difficult to swallow. Ben is Back pulls no emotional punches and viewers will feel every bit of it.

It’s almost Christmas and Holly Burns (Roberts) is, like most parents, frantically attempting to wrap up all of her pre-holiday familial duties. One day after a lot of such running around, she’s shocked, but not altogether displeased, to see her nineteen year old son, Ben (Hedges), skulking around outside the family home, unable to get in because all the locks have been changed. Ben has been staying in a sober living facility for quite some time, and it wasn’t expected that he would be coming home for Christmas. While Ben tells Holly that he’s been cleared to return home for the holidays by his sponsor, his sister, Ivy (Kathryn Newton), is skeptical, and his stepfather, Neal (Courtney B. Vance), flat out doesn’t believe him and wants him gone immediately. Happy to see her son home and apparently in good health and spirits, but knowing that someone not too far removed from a crippling drug addiction can be fully trusted, Holly allows Ben to stay with the family for the holiday, but she refuses to let him out of her sight for even a second on Christmas Eve.

Naturally, Ben’s motivations are constantly questionable, and it’s clear from the outset that he’s not well enough to return to the world he once knew as home. It’s not long into his return that he’s frantically going into the attic to look for his emergency stash of drugs; not so much to immediately use again, but to ease his mind and know they’re there if he can’t get through the stress. He still attends Narcotics Anonymous meetings, but he feels uncomfortable having to bring his mother along while he’s in town. More than once, Ben is offered drugs, and more than once the young declines openly, but Hedges plays such scenes with a degree of ambiguity that suggest maybe the young man did use again, and it happened too quick for us to see it. Ben’s return also reignites some long smouldering and burning bridges, as a drug dealer who wants to be repaid for a deal that went sour brings his quest for restitution at all costs a bit too close to home.

Writer-director Hedges (Pieces of April, What’s Eating Gilbert Grape?, About a Boy) was inspired to make Ben is Back after watching the addiction issues faced by friends and family members, some of whom are no longer with us, and the resulting motion picture is one of unfiltered, complicated, and boldly honest emotions. There’s an air of caution that hangs over Ben at all times, and it manifests itself differently in those around the character. None of them believes Ben 100%, no matter how hard the young man pleads, protests, and reassures those around him that he’s clean and sober. Each character has their built in bullshit detectors triggered by different things. Vance’s stern, but not altogether wrong stepfather is on a hair trigger, and if Ben so much as sneezes in a manner that Neal doesn’t approve of, he’s getting shipped straight back to rehab. As a younger member of the family, Newton’s younger sister is willing to engage with Ben on a friendly level as an equal and peer, but as a member of the Burns family, she doesn’t want to see her mother or younger step-siblings (Mia Fowler, Jakari Fraser) go through the same empty promises and heartache.

But it’s Roberts’ Holly who suffers the most, and Ben is Back gives the actress the richest role she’s been given in quite some time. Just seeing her son at home again leaves her so overcome with emotion that she never recovers from the shock. She’s happy, but also devastated by the flood of terrible memories and maternal fears that are washing over her in the moment. Combined with the already overwhelming enough stresses of getting her large, suburban family through the stresses of the holiday season, it’s amazing that Holly is able to keep things together as well as she does, even when the iron grip on her son starts to slip and everyone has to reconcile this young man’s past with their permanently altered new normal. Roberts’ performance has to bounce back and forth between joyful exuberance and righteous anger and sadness, sometimes within seconds of each emotion. She’s always on guard, but the return of Ben leaves her searching for any happy moment that she can find. It’s a towering piece of acting that stands as one of Roberts’ career best performances; one that only gets better the more concerned she becomes for the wellbeing of her son and family.

As for Lucas Hedges, who gives his best performance this year after already delivering two outstanding and wildly different characters earlier this fall in Mid90s and Boy Erased, the young actor further proves to be one of the smartest and most talented performers of his generation. Deftly playing up the fact that addicts often lie to themselves and those around them to get through the day and get to their next fix, Hedges imbues the character with a perfect balance of charm and mistrust. Ben might be done blaming everyone around him for his problems (which is an important step in any addict’s recovery process), but he’s just short of being able to accept the things that he can’t yet change. Ben believes in the recovery process, but he also wants to rush through it. If he can’t feel great by getting high, he’s going to double down on the dutiful son routine in a bid to feel useful and alive. He can confront the present well enough, but the past is a different story altogether, and Hedges, bolstered by his father’s perceptive material, plays the young man’s inability to move on with his life in realistically detailed fashion. Anyone who has ever had a loved one or family member dealing with any sort of addiction will immediately identify nervous tic, boast, and deflection delivered by Hedges.

While some might balk at a second act wrinkle involving the family’s missing dog as a convenient way of forwarding Hedges’ neatly constructed plot, and the film’s purposefully ambiguous and potentially divisive ending is meant to keep a greater conversation going after the film has ended, Ben is Back never hits a false note when confronting the social and medical barriers faced by addicts and their families. Like many addicts, Ben comes from a happy, healthy, and loving family, and the film’s bucolic, small town, upstate New York setting is precisely the type of place where those in recovery are more likely to slip up and relapse. Outside of AA and NA meetings, Ben and Holly’s attempts to seek help are few and far between, and those available in the community come drowned in judgmental piety from people who refuse to empathize with their problems. Both Holly and Ben are emotionally brutalized by each other and those in their orbit, and Hedges is careful to never speak down to either experience or reduce their emotions into easily palatable moments of dramatic catharsis.

Amplified by its setting during the holiday season, Ben is Back is not only one of the most refreshingly unjolly and painfully realistic Christmas films ever constructed, but also one of the best and most timely looks at addiction in a current age of overwhelming crisis. Hedges never focuses expressly on what we’re doing about the current opioid crisis, but rather how we should feel about it and what attitudes need to be changed and perspectives need to be listened to. Hedges himself has spoken eloquently about how personal of a project Ben is Back was for him as a filmmaker, and it’s hard to not feel like the film he’s made will be a cinematic therapy session for anyone who sees it. It’s one of the most deceptively delicate and moving films of the season, and it deserves far more attention than it has been getting.

Check out the trailer for Ben is Back: