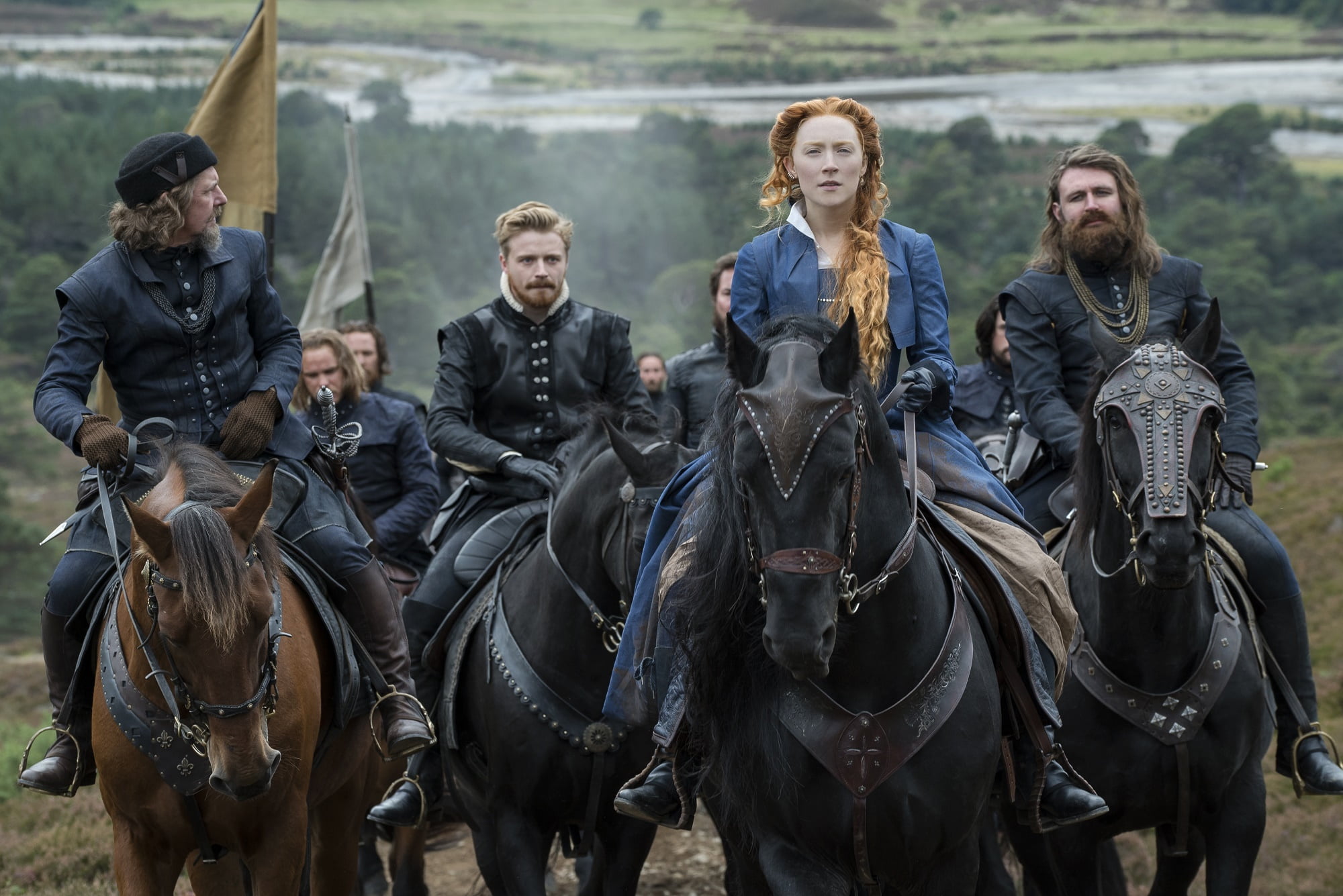 A gorgeously produced, exceptionally performed, and uniquely feminist costume drama Mary Queen of Scots pits two of the best working actresses today against one another and everyone around them for a surprisingly entertaining, but historically dicey biopic. With Saoirse Ronan assuming the titular thone and role of one of Scotland’s most celebrated and controversial leaders and Margot Robbie cast as her English, Protestant counterpart Queen Elizabeth I, this first feature film from theatre veteran Josie Rourke gets the most mileage possible out of its principal cast and opulent set and costume designs, but supplements the showiness of it all with a nice layer of subtext that’s more entertaining and thoughtful than the primary storyline.

The timeline of Mary Queen of Scots begins in 1561, when Mary Stuart (Ronan), a Catholic convert and heir to both the Scottish and French thrones, returns to her home country to assume rule from her half-brother (James McArdle). Mary’s unanticipated return sends shockwaves through Scotland and England, with fears that her religious leanings and tenuous marital status will lead to chaos and a potential rift between the two countries. Mary stands firm in her belief that the country is her’s to rightfully rule, battling against British attempts to marry her off to someone more sympathetic to the protestant cause and the church’s desire to get rid of her by rabble-rousing the peasantry. In England, Elizabeth (Robbie) is constantly being told that she has to deal with the problem of Mary head on, but she has more pressing health and political concerns on her mind to devote all of her attention to Scotland. Both Mary and Elizabeth are unaware of the dirty dealings going on behind their backs, and another civil war within the British empire seems inevitable.

Beau Williamson’s script for Mary Queen of Scots takes much of its factual details from a John Guy biography of Mary Stuart, but plays fast and loose with the details for the sake of drama and pacing. While the actual story of Mary’s ill fated reign and marriage are fascinating enough to support their own film, frequent playwright Williamson leans heavily into the more salacious aspects of the story, most notably a secret conversation between Mary and Elizabeth that likely never took place. There’s also plenty of romantic intrigue happening between the Scottish and Elizabethan courts that’s hard to follow, rather flat, and largely immaterial. Some of these events actually happened, but in Mary Queen of Scots they sometimes come across as filler and enhancement material made to distract from a potentially dryer tale of political deception and intrigue.

On a technical level, Mary Queen of Scots is highly accomplished for a debut feature, with a few choppy editorial decisions and a sometimes obtrusive and overbearing score from Max Richter striking as the only obvious detractions. Rourke makes her cast and period trappings look exquisite and elegant or dingy and dirty depending on what the occasion calls for, and cinematographer John Mathieson switches nicely between the use of natural and artificial lighting without seeming wishy-washy or contradictory with the choices. Mary Queen of Scots is a period epic that’s well in line with previously established and unwritten aesthetic guidelines, but it’s still stunning nonetheless, and it will be interesting to see where Rourke goes next from this point as a film director considering how confident and assuredly she works here. 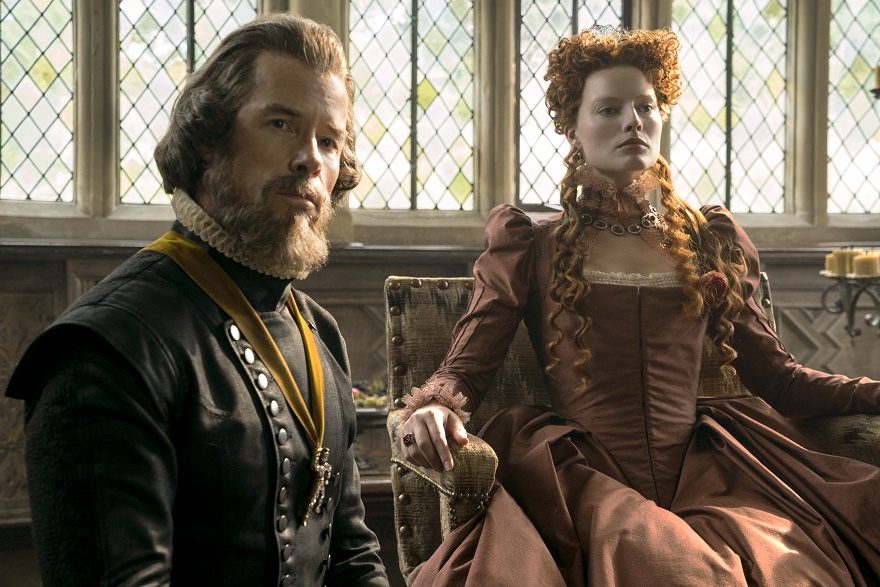 But unless you’re predisposed to gawking at set dressings and period garments, the main reasons to see Mary Queen of Scots are Ronan and Robbie, with the former giving one of her finest performances yet, and the latter showcasing her talents as an underrated character actor. Ronan’s Mary Stuart is empathetic, strong willed, and most importantly, rather likeable, making her a perfect counterpart for Robbie’s more morally slippery monarch. Rourke places both on equal professional footing as competent leaders, but it’s Ronan’s ambitiously minded and honesty driven ruler that purposefully shines brighter. Making Mary feel like a real human being trying to navigate treachery and political pitfalls is no small feat, but Ronan accomplishes the task brilliantly.

It’s also interesting to note how Rourke and Williamson use Robbie’s Elizabeth rather sparingly, making the actress more of a supporting performer than many of her male counterparts in the film. It makes sense because Elizabeth was largely ailing at the time of these events, and partially due to the fact that her advisors and colleagues weren’t presenting the entire picture when it came to Mary’s ultimate goals for ruling Scotland. Robbie makes the most of the on screen time she’s allotted, and provides most of the film’s necessary cultural context without sounding like a robot and garnering the character a lot of empathy in the process.

What makes Mary Queen of Scots most entertaining is watching both Ronan and Robbie’s characters having to deal with the overwhelming number of insecure males beneath them who constantly losing their minds over having to answer to women. Watching Mary constantly putting her cowardly and closeted husband (Jack Lowden), her treasonous and power hungry half-brother, the head of the Scottish protestant church (David Tennant), and Elizabeth’s duplicitous emissary (Joe Alwyn) in their place – whether subtly or directly – is richly satisfying, and a similar scene where Elizabeth erupts in a rage towards her privy council (headed up by a low-key and excellent turn from Guy Pearce) is one of the best moments in any film this year. Mary Queen of Scots succeeds in showing the ruling of a sovereign nation as a soul sucking and mentally taxing task that’s only compounded by the various social stigmas women had to put up with at the time (and often still do). In this sense, Mary Queen of Scots boasts a more welcome and contemporary approach that makes the theorized meeting between the two leaders carry a lot more weight than it would’ve if such a showdown existed in a sterilized political vacuum.

It’s not the most adventurous, audacious, or irreverent costume drama to be constructed from the same historical figures, but Mary Queen of Scots is a lot more fun, relatable, and less stodgy than many of its contemporaries. A huge part of that might be Rourke’s attention to detail and her leading ladies, but that doesn’t make the film any less of a success.

Check out the trailer for Mary Queen of Scots: