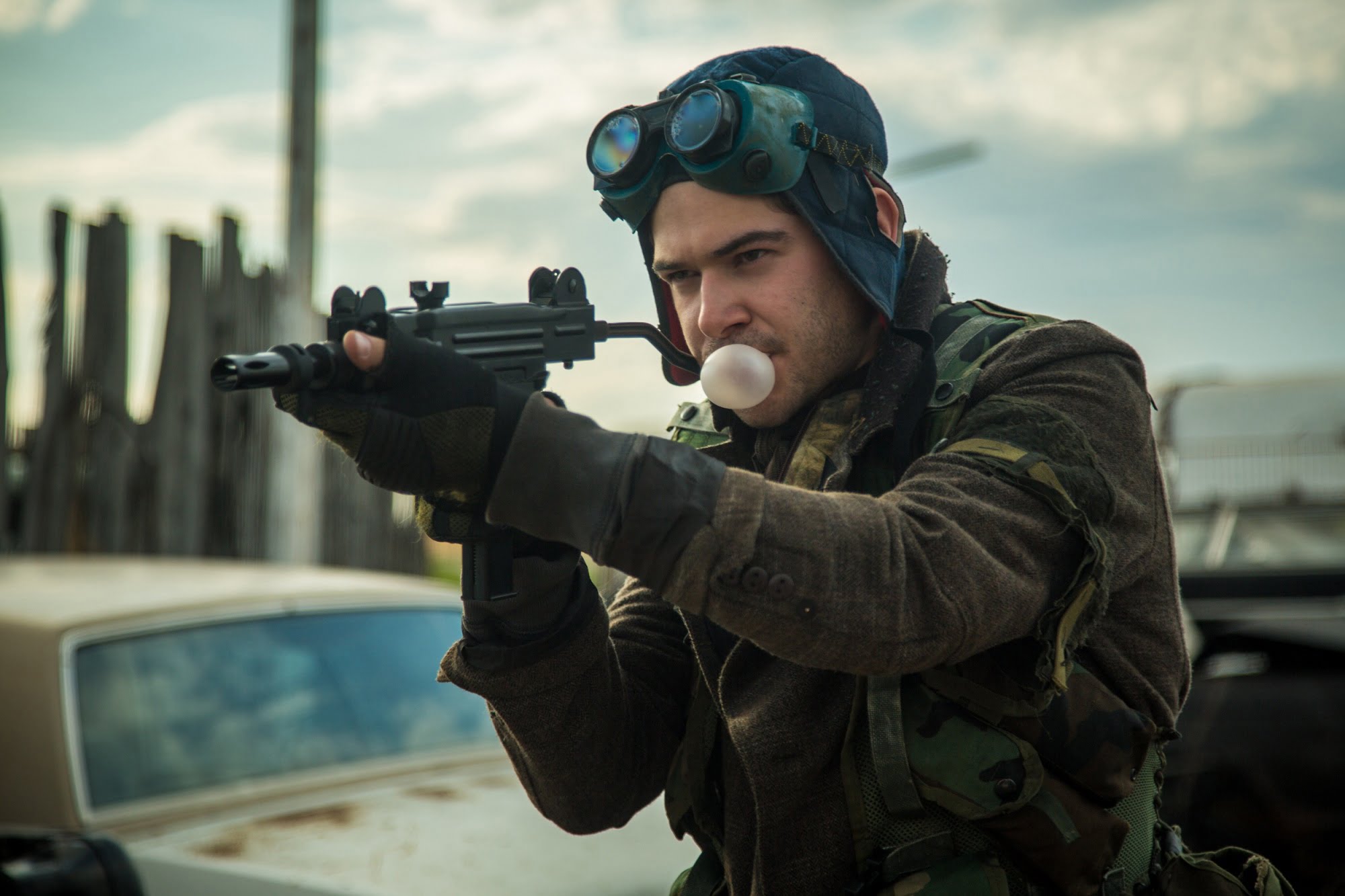 The Canadian produced dystopian action-adventure SuperGrid doesn’t have a huge budget or many clever or original ideas, but it’s a breezily efficient romp just the same. By keeping things short, sweet, and to the point, the ragtag charms of SuperGrid never wear out their welcome, despite never leaving all that much of an impression. It has a “can do” spirit that makes one smile at the fact that something this ambitious could be made on a modest budget, but it’s too inconsistent and slight to ever be considered a cult or genre classic.

Deke Campbell (Marshall Williams) and his older brother Jesse (Leo Fafard) inhabit a future where mining concerns basically own everything, water is a prized commodity, infrastructure has irreparably crumbled, incurable disease is widespread, and criminal activity runs rampant. They used to be partners in crime, working as long distance transporters of sensitive or illegal goods, but the wedge between the two brothers was driven further after Deke took on a job that went awry and claimed the life of their sister. To make up for his previously botched mission, Deke is forced by a mob boss (Jonathan Cherry) into one final big ticket run across the American midwest and Canadian prairies. The job is basically a suicide mission across the SuperGrid: a massive highway running from the Dakotas to the Northwest Territories that’s patrolled by profiteers and psychopaths, and if the other drivers and criminals don’t get to you, the deadly and degenerative “hard lung” disease will. Not wanting to lose another sibling, Jesse agrees to come out of retirement and ferry Deke across the borders and plains in his nuclearly souped up shitbox truck to retrieve and deliver an unknown package with the power to change the course of human history forever.

SuperGrid is the latest film from Canadian genre filmmaker Lowell Dean, better known as the director of the inexplicably beloved WolfCop movies, and the genuine, straightforward homage to action cinema the director manages here is far more endearing and earnest than his try-hard attempts at cultivating humorous cult classics with his previous efforts. While most of the ideas contained within the script – courtesy of T.R. McCauley and Justin Ludwig – are straight out of The Road Warrior and The Dukes of Hazzard (a combination that’s admittedly so tantalizing it’s astounding no one thought to mash them up sooner), SuperGrid boasts an irrepressible spirit. Dean doesn’t have much to work with here, and while he thankfully isn’t trying to be funny this time out, he knows how to make the little he does have work to his advantage.

The action sequences aren’t particularly flashy, but they don’t necessarily need to be. There’s some impressive stunt work in a sequence where the Campbell brothers are pursued by a pair of “jackers” on motorcycles, and while the climactic battle between all the film’s good guys and all the villains sometimes looks like a bunch of friends cosplaying on the weekend (and is further hampered by some of the cheapest, least convincing CGI explosions of all time), there are individual flashes of ingenuity peppered throughout. Those who like their action big and bold will likely be let down by SuperGrid, but anyone with a soft spot for DIY apocalyptic thrillers, road movies, and American and Australian exploitation pictures of the 70s and 80s will be sufficiently charmed. Dean’s refined and evolving directorial spirit puts just enough petrol in SuperGrid’s tank. 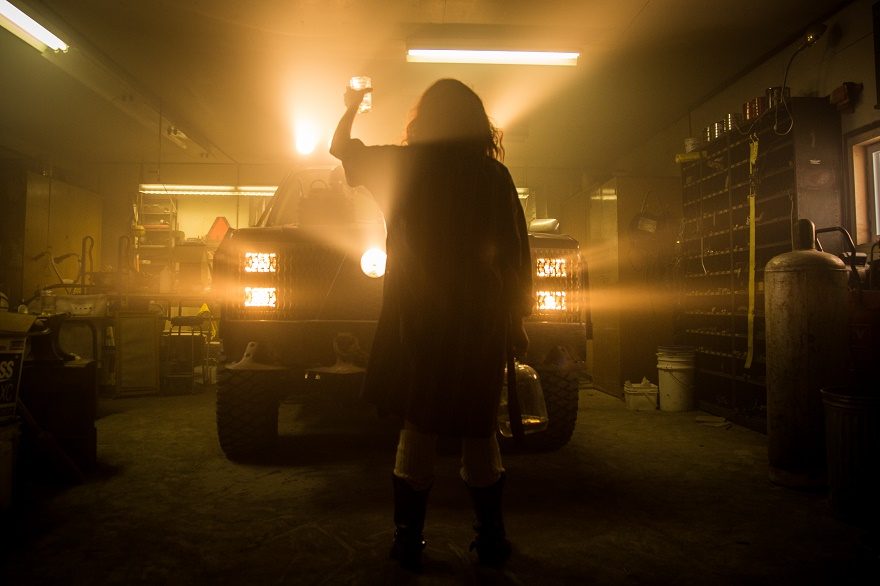 The problem here isn’t a lack of will and desire, but rather the picture’s overall inconsistency and how it’s reflected in the leading men. McCauley and Ludwig’s script has plenty of tough guy dialogue and situations that seasoned pros could knock out of the park with gusto and aplomb, but Fafard and Williams struggle mightily to give SuperGrid a pair of charismatic heroes. Fafard fares slightly better as the more responsible and cautious brother, but that’s probably because his demeanour and expression rarely change throughout. Williams, on the other hand, plays the screw-up of the pair in a wishy-washy and less than confident fashion. Both actors emotionally stumble over some of their line readings, almost like they don’t believe in the words they’re saying, leading to charged moments that should be a home run landing like a pop-up foul. From scene to scene, it’s hard to guess if the leads are going to nail it or whiff it, and it’s an unfortunate aspect that’s probably just as much the fault of the director and editors as it is the actors.

The supporting cast, however, is aces across the board. Cherry and Fei Ren bring a perfect amount of manic energy and unpredictability to their parts as the primary villains. Retired wrestler Jay Reso is a campy and eventually sympathetic blast as a hard nosed, opportunistic border guard that has more development than any of the other characters. There are also a handful of decently written and well performed female characters that help the Campbell brothers along the way, including Natalie Krill as Jesse’s ex who’s protecting them from afar, Amy Matysio as their mechanic, and Tinsel Korey as the owner and operator of a hospital located along the SuperGrid. They provide a lot of the colour and detail that makes SuperGrid a lot easier to buy into and keep up with, making their plights and exploits invariably more interesting than those of the heroes.

If nothing else, the unassuming and lightweight SuperGrid is at least exponentially better and more genuine than this week’s other post-apocalyptic offering, the dire, bloated, and mega-budgeted Hollywood production Mortal Engines. Unlike that piece of irredeemable garbage, SuperGrid boasts a genuine love for filmmaking, an understanding of genre mechanics, and a desire to give the audience something entertaining. It takes roughly until the halfway point of SuperGrid – when Jesse and Deke’s cargo is finally unveiled – to fully gel and become a bit more of a romp, but at least the pat and well trod ride isn’t a particularly bumpy one.

Check out the trailer for SuperGrid: