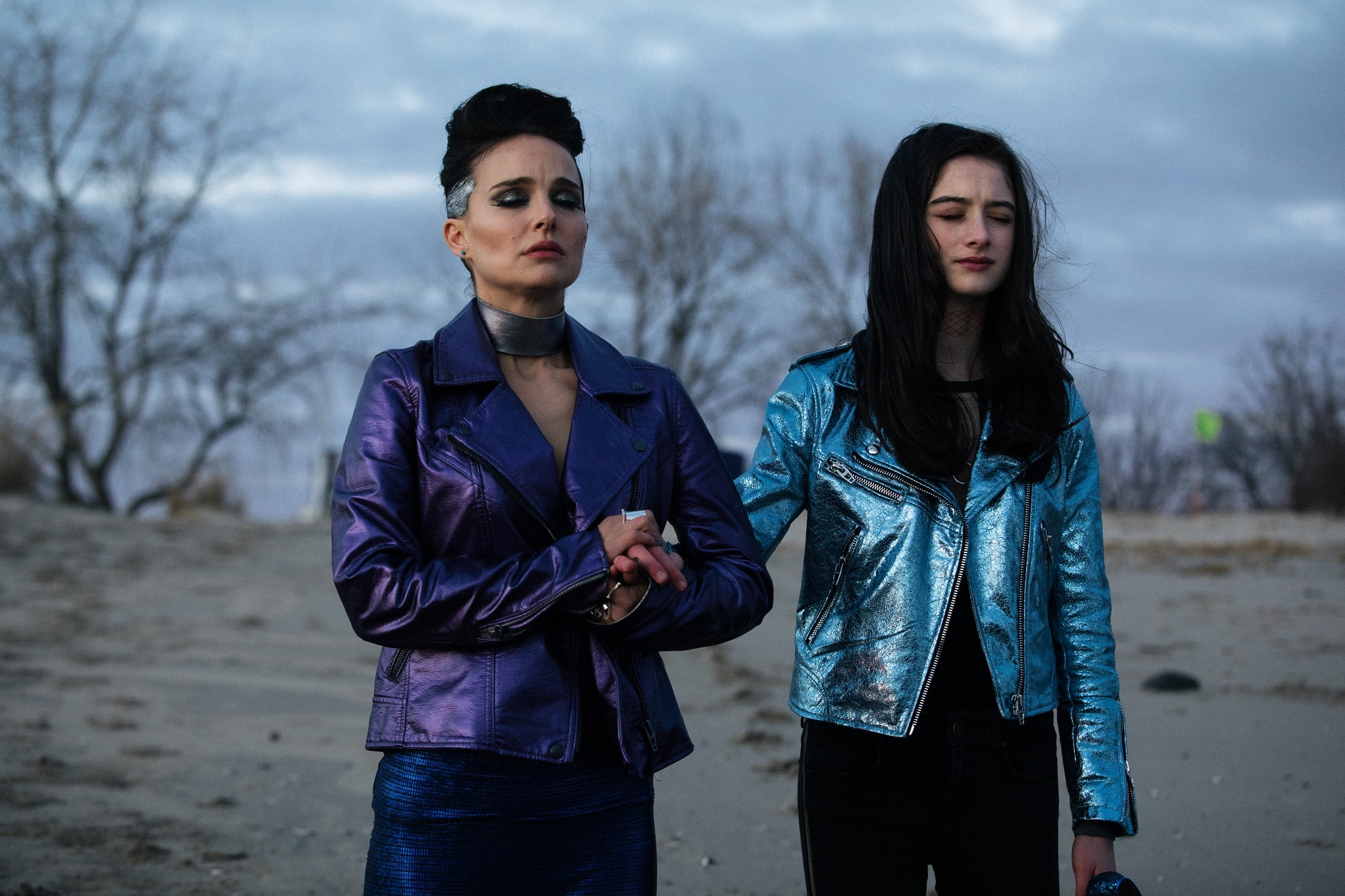 An ambitious, abrasive, overwhelming, and sprawling look at the dubious link between tragedy and popular culture, writer-director Brady Corbet’s Vox Lux is bound to be looked back on as one of the most fruitful, but divisive films of the year. Atypically structured, designed, and performed, Vox Lux is both unlike anything else that’s been released this year and deeply indebted to the auteurs that influenced it. Watching Vox Lux is as invigorating, exhausting, and disorienting as being strapped to a rocket that’s trying to navigate the tight spaces and corners of an elaborately constructed maze, but while there’s a lot to take in and process, almost all of it provides plenty of food for thought. It’s a psychological drama that’s appropriately psychotic.

In the late 90s, teenager and aspiring singer-songwriter Celeste Montgomery (Raffey Cassidy) survived a mass shooting at her school in Long Island, New York. The shooter’s bullet narrowly missed both killing her and destroying her vocal cords, and through the senseless tragedy, young Celeste found a platform for her talents. A song she penned and performed about her sadness and grief became a pop culture rallying cry for a hurting nation. Celeste was quickly picked up by a savvy, veteran manager (Jude Law), and her inseparable sister, Eleanor (Stacy Martin) tagged along on her whirlwind, meteoric rise to pop music stardom. Fast forward to present day when an increasingly burnt out, egotistical and antagonistic Celeste (Natalie Portman) finds her name attached to a different large scale tragedy, and the declining, but still popular superstar – who is now somewhat estranged from her sister and teenage daughter, Albertine (also played by Cassidy) – finds it difficult to relate to such previously identifiable pains.

It might be easier, if perhaps slightly unfair, to analyze actor turned filmmaker Corbet’s second feature by cycling through the filmmakers he most wants to emulate with Vox Lux’s pastiche style. Although the film is narrated throughout with a cold, dryly sarcastic dissonance by Willem Dafoe in the tenor of a fractured fairy tale that’s somehow turned into a lecture, Vox Lux is indebted to different filmmakers for each of its increasingly chaotic and purposefully melodramatic segments. Outside of Dafoe’s omniscient narrator, a handful of curiously crafted songs co-written by Sia, and a gritty, borderline grindhouse visual aesthetic from inventive British cinematographer Lol Crawley that keeps modernity at bay, Vox Lux is a film that’s continually evolving (or perhaps devolving) alongside its increasingly unsympathetic main characters. There are no constants to be found here, and that’s what makes Corbet’s look at the insanity of celebrity culture so invigorating for those who can get on the same wavelength.

Sometimes when critics draw comparisons between a filmmaker on the rise and the directors that clearly influenced their sense of pacing, storytelling, and style, such connections are employed derisively (or lazily), but in the case of Vox Lux, where such demarcation points are as visible as black hearts on puffy sleeves, I mean them as compliments. Corbet has created evolutionary and parallel histories of pop stardom and American tragedy from the late 90s to today, where the cycling through of such ever changing styles only enhances the material instead of distracting from it.

The earliest portions of Vox Lux owe a lot to the slow, contemplative, and oblique earlier works of Gus Van Sant, before gradually transitioning more into Danny Boyle territory with plenty of cheeky montages and transgressive nastiness creeping in as Law’s dutiful and slightly sleazy manager starts helping Celeste navigate the murkier waters of fame and success. After a brief dalliance into David Fincher inspired music video territory, the shift from Celeste’s early years to today (which is again punctuated by another large scale tragedy) slows the tempo down for a time being to the level of a Billy Wilder melodrama. Once the rift between Celeste and her daughter has been blown further open and the cracks in the singer’s unflappable facade begin to grind like fault lines against each other, Corbet launches headlong into a showstopping finale that functions similarly to a Darren Aronofsky climax (and not just because Portman’s husband Benjamin Millepied returns as a choreographer here as he did for Black Swan), but somehow the younger filmmaker manages to outpace and outperform his older counterpart. 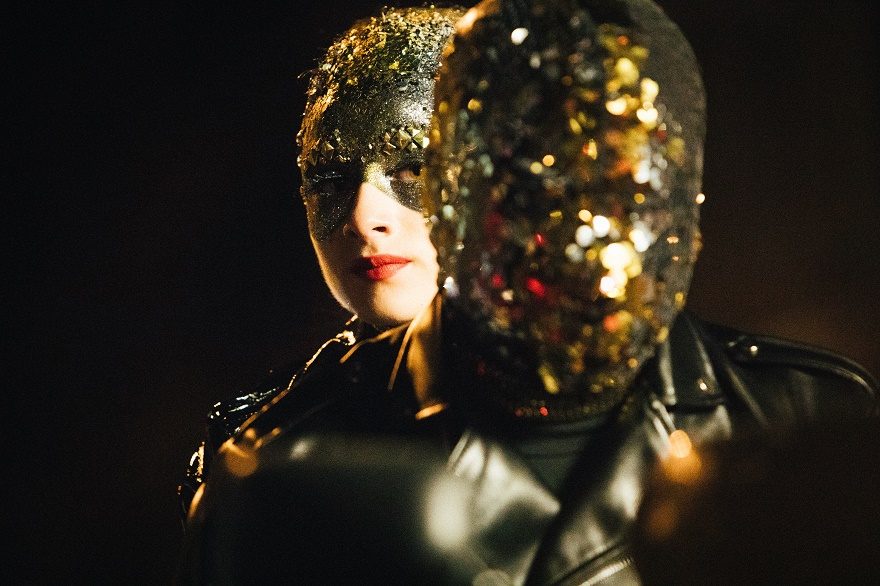 As people and popular culture change with advances in technology, prevailing political opinions, and fresh ideas, cinema always comes along for the ride, and Vox Lux’s sometimes purposefully messy and jazz-like mish-mash of tones and styles exceptionally parallels its narrative. Not everything works here; the dividing of the story into chapters to feel more literary comes across as unnecessary, and the frequent employment of natural lighting sometimes works against Corbet and Crawley’s intentions. At the same time, I can’t say that I’ve seen another film quite like Vox Lux, and the effort is greatly appreciated.

As an indictment of celebrity culture and the entertainment industry’s constant desire to make a buck off the suffering of others under the guise of creating something inspirational or aspirational, Vox Lux is resoundingly on point throughout. Young Celeste is pained and conflicted, but she’s rushed through her recovery process so her manager and record executives can cash in on her hot moment. She falls in love with a hard rocker who “makes the kind of music [her attacker] listened to,” suggesting that her stardom comes only at the cost of reliving her tragedy day after day. As an adult, people around Celeste grow and change, with her manager becoming softer and more introspective, and the roaming publicist (Jennifer Ehle) who previously didn’t care in the slightest for her latest client has grown more doting and protective. Eleanor has seemingly moved beyond the past, but it took getting fed up with Celeste’s increasing emotional abuse to seek a new path. Everyone seems to have changed for the better except for Celeste. After a tense lunchtime conversation with her daughter, Dafoe’s narrator steps in to mention that Celeste has flamed out and broken down spectacularly on previous occasions, and it’s immediately apparent that yet another emotional reckoning is on the horizon. No one outside of their bubble would ever notice this was happening, and few outside the gossip community would ever dare to comment on it, but Corbet makes sure that his audience knows precisely what’s going on in the internal and external world of the characters at all time with great detail and empathy.

In the dual role of young Celeste and the singer’s teenage daughter, British performer Cassidy commands the screen just as resolutely as her more seasoned co-stars. As the singer, Cassidy subtly makes changes in the young woman’s personality known over time, evolving from shy, to reserved, to confident, and providing Portman with a perfect point to resume the same character down the road. As the adult Celeste, Portman boasts exceptional and believably uncomfortable chemistry with Cassidy now in the role of a frustrated daughter. Portman, Law, and Ehle might have a lot more to express in the showier roles of Vox Lux, but it’s Cassidy who leaves the most lasting impression and provides Corbet’s film with two vastly different, but intertwined moral centres.

Portman’s blustery and not-particularly-sympathetic portrayal of the artist as an aging woman might leave some people annoyed,, but remember that she’s being asked to portray two types of characters that are rarely mixed into a single package. Celeste’s evasiveness and quickness to lash out against those around her (most notably towards Law’s manager, Martin’s sister, and a journalist played by Christopher Abbott in one of the best and only cinematic depictions of roundtable interview going horribly off the rails) belies untreated pain and trauma. At the same time, Portman also has to play a Madonna level superstar, and all of the emotional and professional contradictions that come with such fame. She’ll show up for the show and nail her performance, but she might be wasted and complain about it the entire time. She’s more than willing to talk about how a violent act gave her a career, but woe betide anyone who tries to draw parallels between her work and more recent unspeakable acts around the world. Portman’s tough-talking, heavily accented turn is bound to be as divisive as the movie Corbet has built around the character, and it’s actually a perfect fit.

Vox Lux might be trying a bit too hard to impress, but that kind of feels like the whole point of this. It’s a story about people begging to be noticed, both positively and selfishly. It’s about noting that the world is going to hell, and then refusing to do anything about it because it might take people out of their comfort zone to acknowledge such feelings. It’s a deliberate provocation and a shock to the senses. A lot of people are going to hate this, but its admirers (myself included) will find Vox Lux haunting their memories weeks after they’ve seen it.

Vox Lux opens exclusively in Toronto at Scotiabank Theatre on Friday, December 21, 2018. It expands to additional Canadian cities in January.

Check out the trailer for Vox Lux: