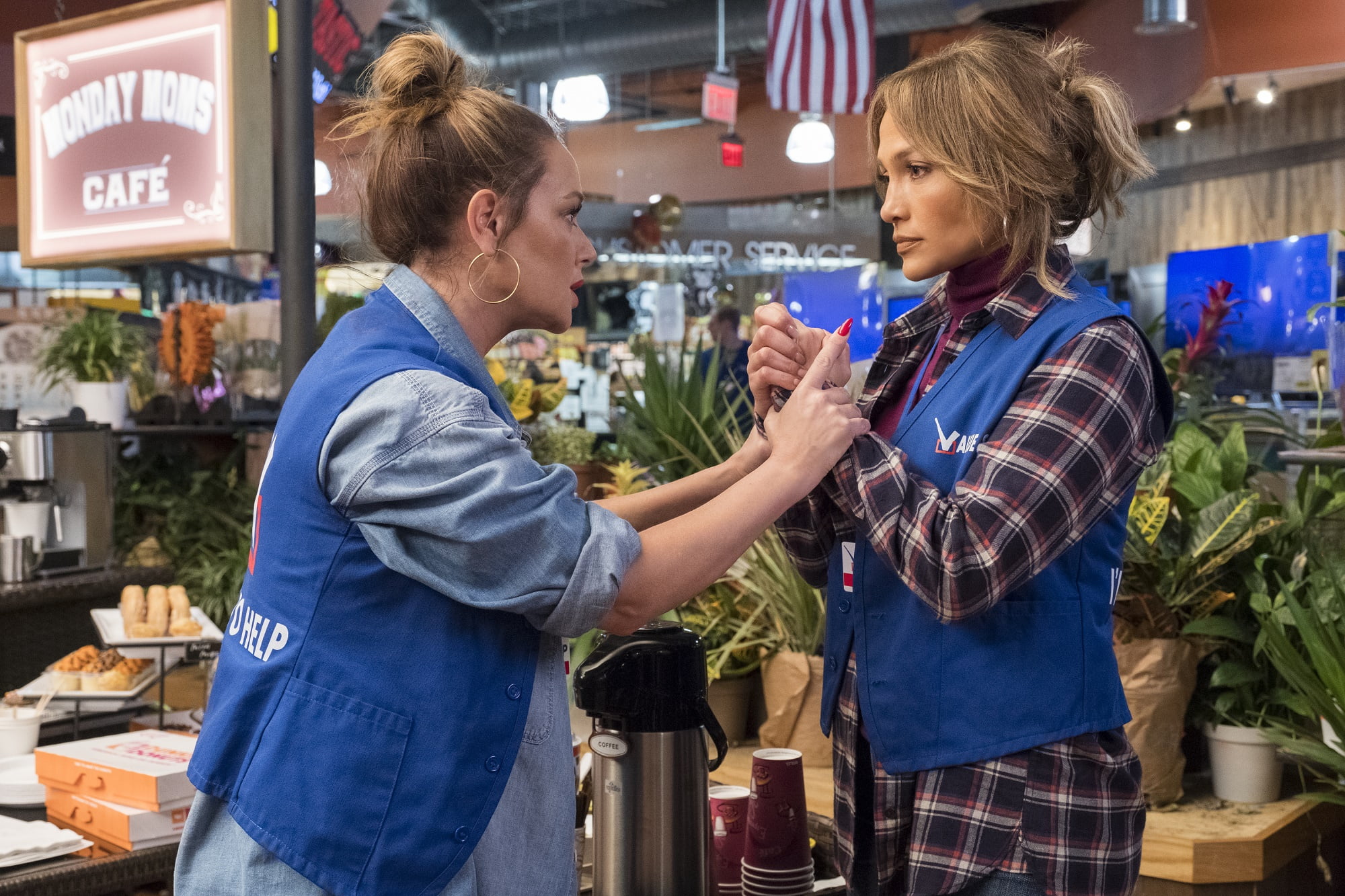 The affable, but unexceptional workplace comedy Second Act boasts a surprisingly solid, confident, and lightly inspiring first half before a midpoint twist sends the whole thing onto a different set of tracks in a flash and straight into needlessly manipulative territory. While Second Act never becomes unwatchable or even all that annoying, it’s a shame that the creative powers that be didn’t have enough faith in their admittedly slight, but strongly realized premise. Until that twist arrives, Second Act is one of the better films about a streetwise blue collar worker giving uppity white collar types a run for their money.

Maya de la Vargas (Jennifer Lopez) has toiled for fifteen years as an innovative, forward thinking assistant manager for a Queens, New York big box retailer. Although her ideas on how to better a customer’s experience are appreciated by her otherwise oblivious regional manager (Larry Miller), she’s passed over for a promotion to general manager in favour of a “team builder” with a university degree and no practical retail experience. With only a GED to her name and no post-secondary experience, Maya – who has purposefully been putting off starting a family with her boyfriend (Milo Ventimiglia, who between this, Creed II, and This is Us has officially gone full Sylvester Stallone) in favour of a potential professional career – sees the days at her job as limited. Her tough talking best friend and coworker Joan (Leah Remini), tells her tech wizard son to make Maya a punchier resume filled with half-truths and outright lies about her experience and send it off to prospective employers. Although annoyed at first and not realizing the extent to which her resume has been fabricated, Maya lucks into an interview with a major Johnson & Johnston style product manufacturer. The CEO (Treat Williams) thinks Maya’s retail experience and her penchant for no bullshit straight talk would make her a strong creative consultant, a decision that the boss’ daughter, Zoe (Vanessa Hudgens), and an arrogant VP (Freddie Stroma) can’t stand. Maya is placed into a head-to-head competition with Zoe to come up with a new, cost effective, and entirely organic skin care line, and while the older working woman is in over her head, she’ll realize that she has more in common with her younger counterpart than she initially thought.

Second Act is the kind of film that owes a lot to “fish out of water” workplace comedies like The Secret of My Success and The Internship; movies where intelligent, driven, uniquely skilled, but ultimately unqualified hires from unusual backgrounds change environments and attitudes for the better. Directed by competent, but bland journeyman director Peter Segal (Tommy Boy, Get Smart, Grudge Match) and written by Justin Zackham (The Bucket List, One Chance) and Elaine Goldsmith-Thomas (who produces many of Lopez film and television efforts and runs the actress’ company), Second Act plays out entertainingly enough off the top, despite the viewer always having an idea of how this is all going to more or less play out. There will be some scenes where Maya will have to bluff her way through professional and social pitfalls (including an admittedly hilarious set piece where she has to pretend she knows how to be the coxswain of a crew boat), the villains will get closer and closer to her secrets, and she’ll question if she really has the mettle and stomach for her new job. This type of narrative has a pretty low-set bar, but Second Act has crafted a character worthy of anchoring such a narrative. 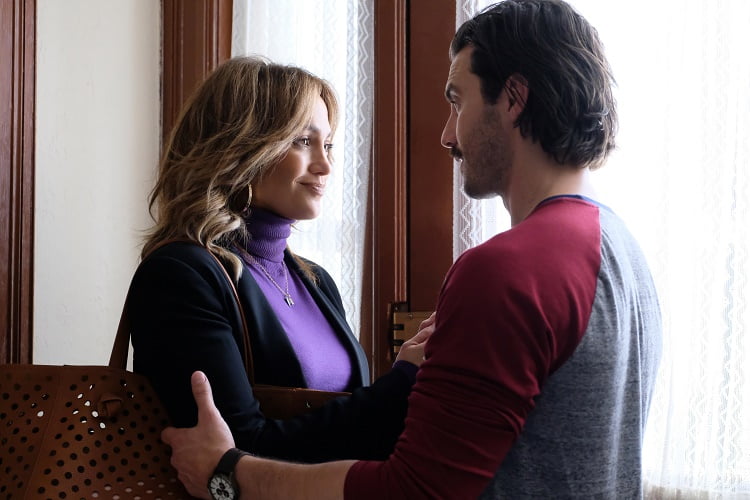 Lopez’s Maya is confident, relatable, and sympathetic throughout. From the moment the audience meets her, Maya is a woman who knows her worth. She voices her displeasure, hopes someone will take her concerns and value as a company asset seriously, and is willing to walk away when she realizes that will never change. Unlike some characters in these films, Maya’s wish that street smarts could be valued as much as book smarts is justified and well drawn by the writers. It’s always satisfying to see a character like this – or at least one that’s as smartly written and performed as the one Lopez is playing here – proving themselves to a world that has unfairly written them off as second class citizens. It’s not rocket science, but it’s better done than most examples in this subgenre.

But just as the plot is breezing along at a nicely likeable clip, Second Act pulls a major twist out of its pocket. It’s one that’s kind of hinted at, but also something that’s completely unnecessary. It’s supposed to change the dynamic between the characters, but no one seems absolutely sure how to make the most of such a swerve. It’s not even an offensively bad or film souring one, but it’s so awkwardly handled and integrated that it should’ve been excised altogether. It adds nothing but a single tearjerker scene that falls flatter than a pancake, and casts a shadow over everything that follows it. Having said that, I’m sure that this twist works better in its position at the film’s halfway point rather than as a third act reveal, where it might have been absolutely deadly. At least now I can joke that the film’s title points to where the plot twist is going to happen.

The chemistry Lopez has with many of the film’s well cast supporting players counts for a lot in Second Act. Every scene between Lopez and Remini, who hasn’t had a chance to cut this loose in a film for quite some time, yields a fair number of chuckles and genuine laughs, although one wishes the actresses could actually curse instead of censoring themselves in a bid for a more appealing MPAA rating. Second Act also makes good use of underrated comedic talents Alan Aisenberg, Charlyne Yi, and Annaleigh Ashford as the members of Maya’s research and development team. Even Williams is putting his best foot forward in what sounds like a throwaway role on paper. They all give Lopez plenty to work with, and she responds in kind by letting them steal scenes wherever they can.

Second Act is barely a notch above the kind of movie that will play endlessly on basic cable television stations on Saturday and Sunday afternoons. It’s damning Second Act with faint praise by saying that this could’ve ended up far worse, but the truth is that these films are usually far more dire than this. It’s thoroughly forgettable, but at least it’s a pleasant sort of forgettable. Would I recommend it to anyone? Probably not outright, but mainstream audiences who want something other than an effects driven franchise picture this holiday season could do a lot worse.

Check out the trailer for Second Act: