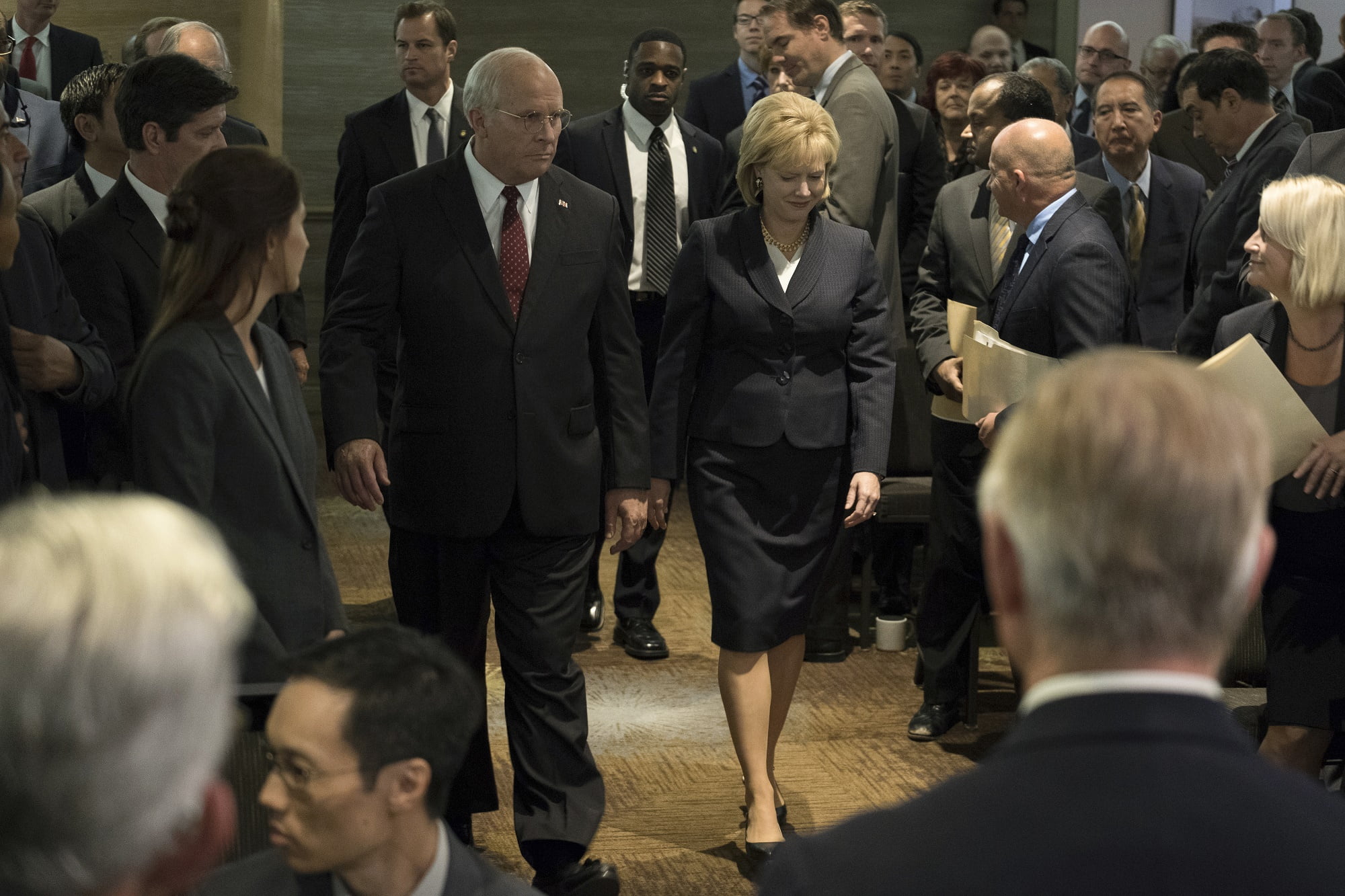 Brash, complicated, and somewhat of a gorgeous mess, Vice, Adam McKay’s pointed critique and chronicle of the career of American politician Dick Cheney moves like an eighteen wheeler barrelling down a hillside with no breaks. It’s a film that’s both rampantly out of control and yet perfectly focused and stripped down to focus on the dirty work at hand. It’s rough, imperfect, and a bit too on the nose, but as a reflection of the controversial, widely loathed/celebrated, underhanded, and game changing political figurehead McKay has built his movie around, I can’t think of a better and more worthy approach.

Opening with imperfectly rhyming scenes of a young and drunken Dick Cheney (Christian Bale) making an ass of himself during a traffic stop before cutting to the older, balder, and fatter Vice President trying to navigate the sticky waters of the 9/11 terrorist attacks, Vice uses a constantly time shifting narrative to draw parallels between various events in the former Haliburton CEO’s life. From his humble, but still equally power hungry beginnings as an intern to then republican senator and future Secretary of Defense Donald Rumsfeld (Steve Carell) in the 1970s, to his moderately successful ten year run as Wyoming’s only member of the House of Representatives, and eventually to his initially reluctant agreement to become the running mate of presidential Candidate George W. Bush (Sam Rockwell), Vice follows an eminently dislikable and unapologetic man – with an equally driven and obstinate wife, Lynne (Amy Adams) – who knew what he wanted and exactly how far he was willing to go to get it. Ultimately, by savvily exploiting constitutional and legislative loopholes, Cheney was able to get everything he wanted out of life and take almost none of the lasting blame because he was merely the vice president and not the actual leader who functioned as the face of the free world. Vice is a story about the American Dream writ as large and obnoxiously as possible,

McKay doesn’t play coy with his opinions of Cheney, placing them at the front of everything that happens throughout Vice. Although there’s a sense of begrudging admiration for a man who gamed the system as well as Cheney did, there’s zero sympathy to be found for the political devil in Vice. McKay isn’t afraid to openly or subtly refer to Cheney as an opportunist or a dirtbag through Jesse Plemons’ only slightly objective everyman/family man/military man narrator. That character is the closest parallel one could make to McKay’s more playful and surprisingly less irate subprime mortgage crisis drama The Big Short, with Plemons functioning as the recurring “Margot Robbie in a hot tub” to explain the more complicated details of Cheney’s life in politics. There’s also a bizarre Shakespearean aside involving Bale and Adams, a fake-out ending, and a mid-credits scene that lands like a punk rock guitar smash, but for the most part, Vice is a lot more standard and streamlined effort than McKay’s previous attempt at politicized satire. 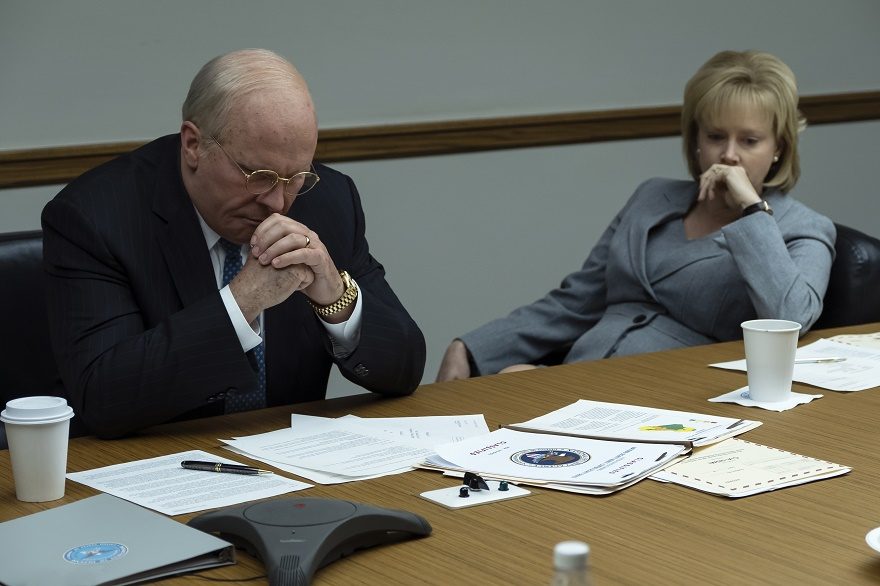 The complexity of Cheney’s actions and the forever office altering precedent he set in one of the most traditionally thankless and ceremonial offices in world politics is staggering. Somehow, Cheney’s maneuvering is harder to peg down than McKay’s crack at the U.S. market collapse, making both films feel like cheeky companion pieces. Cheney was a fiercely private and soft spoken man who rarely let anything slip, and only spoke up at the absolute perfect moments for him to do so. He surrounded himself with people willing to look into ways and means to gain more power and agency within the White House, and his wife did everything in her power to back up his efforts. At its most chaotic and complex, Vice couldn’t be followed with a road map, but that’s kind of the point. Cheney was so skilled at obfuscating the truth that historians will still be trying to unpack the former vice president’s actions decades from now. Does that mean that Vice might be a biopic that’s coming out a bit too soon to give a comprehensive look at its subject? Probably, but that doesn’t make the material any less relevant and topical. Since, in McKay’s take on events, Cheney clearly saw Bush as a rube who couldn’t tell his ass from a hole in the ground, it makes one question exactly what made career politician Mike Pence team up with Donald Trump, and how the job of Vice President has changed in recent years. If viewers didn’t know what the “unitary executive theory” was before watching Vice, they still might not totally grasp the totalitarity of it all, but as McKay says in the film’s opening title card, he did his “fucking best.”

If McKay’s approach is purposefully scattered and sometimes like watching someone trying to angrily jam puzzle pieces together with a jackhammer, Bale and Adams are the cool, levelheaded constants that keep Vice captivating. Bale, once again undergoing massive physical transformations to play both young and old Cheney (and I am honestly starting to worry about his health at this point), can do more with a look and his appearance than most actors could do with pages of speeches and one liners. Bale, who nails Cheney’s pursed and curled lip cadence, portrays the former vice president as someone whose wheels are always turning. Bale’s take on Cheney is a masterful interpretation of a social climber who taught himself from a young age how to expertly read a room and exploit the weaknesses of other. As his better half, Adams shines just as brightly as a woman with a similar set of skills and possibly even more conservative politics, especially when it comes to their gay daughter (Alison Pill). It doesn’t matter if they play their scenes opposite fellow professionals like Carell (who’s great), Rockwell (who doesn’t have that much to do, but nails Bush on technical levels), or brief turns from the likes of Tyler Perry (nicely portraying Colin Powell) and Eddie Marsan (as Paul Wolfowitz). It’s always known that Dick and Lynne are in control of their own destinies, and lording their will over the film itself.

Vice is a righteously pissed off biopic that’s sometimes impossible to keep up with, but it feels true to the experience of trying to figure out what makes Dick Cheney tick. While I don’t think that Vice is of the same overall caliber are McKay’s previous foray into semi-serious filmmaking with The Big Short, it’s an ambitious step in his evolution as an auteur. Although McKay directed plenty of broad, but experimental comedies in the past, Vice feels like a sophomore feature. It almost feels like a slump, but it’s far too intriguing, impassioned, and thoughtful to be dismissed as such. It’s a lot to take in at once, and I wonder if a second viewing will help to clear up some of the chaos. At any rate, I do look forward to sitting down with Vice again over the holidays.

Check out the trailer for Vice: