Review: Pick of the Litter 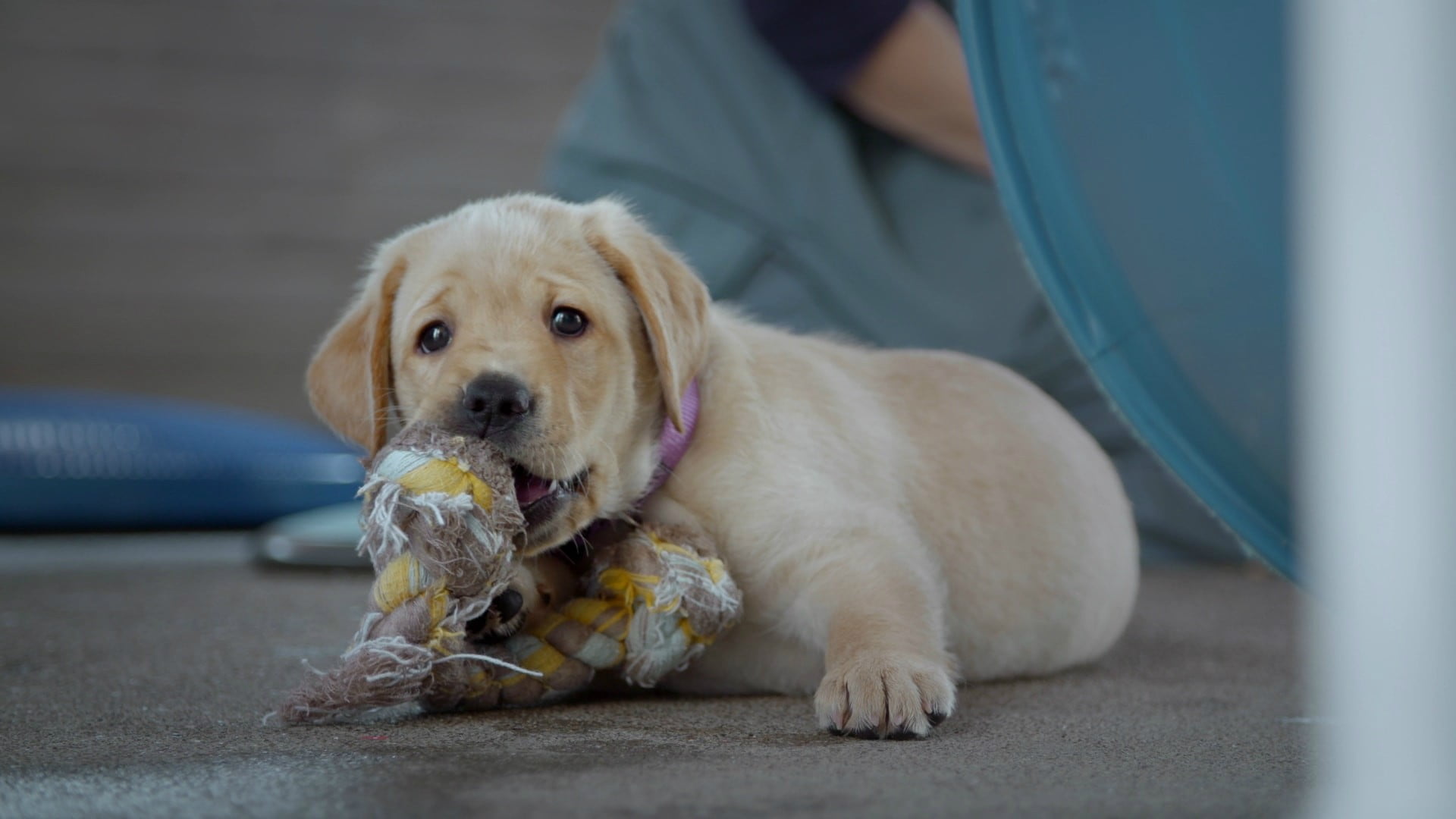 More inspirational, suspenseful, and unpredictable than the best sports movies and more genuinely moving than an all day marathon of romances, the documentary Pick of the Litter follows around some very good boys and girls as they strive to make the world a better place. An intricate look at puppies that have been born into a program to become seeing eye dogs and the dedicated handlers that attempt to train them, Pick of the Litter takes a crowd pleasing approach to documentary storytelling that will leave viewers gasping and reaching for tissues every several minutes.

Documentary filmmakers Don Hardy Jr. and Dana Nachman (who previously collaborated on the similarly tearjerking Batkid Begins) follow a litter of five puppies born from the same mother as they navigate an intensive training program at Guide Dogs for the Blind. Of the 800 puppies that are bred by the program each year, only 300 pass through the program. Training often takes between 20 and 26 months, and happens in numerous stages, with Hardy and Nachman documenting the various steps taken by puppies Patriot, Primrose, Potomac, Poppet, and Phil as they navigate the program. As soon as the tiny and playful pooches have grown enough, they’re transferred to outside puppy raisers for 14 to 16 weeks, who are tasked with taking the dogs through various real world scenarios and gently conditioning the animals to behave properly. Many dogs in the program will flunk out either during or after this part of the training cycle, getting “career changed” to either become breeders, train as service dogs for other purposes, or to get adopted out. After that stage, they’re transferred back to Guide Dogs for the Blind for even more intensive training, and from there, the best of the best will graduate and be paired up with their forever owners and caregivers.

Pick of the Litter opens with stakes establishing testimonials from people who wouldn’t be where they are today without their service dogs, and the weight of responsibility placed on these animals and those tasked with training them is felt immediately. Guide dogs have to possess acute mental stamina and control. Even the seemingly simple task of walking is something that has to be rigorously rehearsed. Guide dogs have to be able to navigate airports, subway platforms, and be prepared when erratic drivers speed through intersections without stopping. In dark hallways and burning buildings, guide dogs need to know how to find exits and guide their humans to safety. These animals have to obey commands at all times, but know when those orders should be ignored for the safety of the human they’re guiding. But outside of helping those with damaged, failing, or non-existent sight navigate life’s pitfalls, many guide dogs owners speak lovingly about how their new companions have opened up worlds previously unavailable to them. There are only so many places one can go with a cane, and a good guide dog is a conduit to freedom for many, and some are willing to wait for a year or more to be placed with a friend of their own. 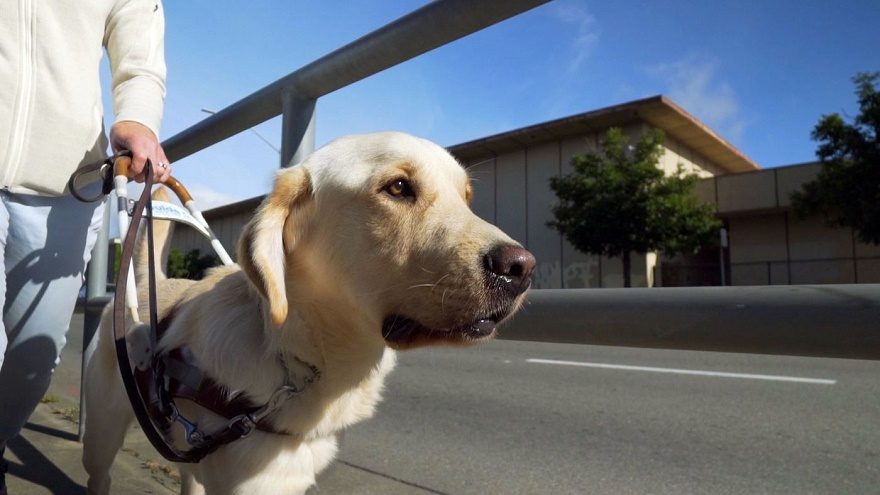 Nachman and Hardy make certain that such heroism and hard work doesn’t go unnoticed and unrewarded, as Pick of the Litter does a better than expected job of making viewers as invested as possible in each puppy and their various trainers. One can never fully understand or guess at what point each of these dogs might clue into what they’re being trained to do, but Pick of the Litter is the type of competitive motion picture where the viewer doesn’t want to see any of the subjects lose. The dogs themselves might still be wrapping their heads around the concept of responsibility, but their human counterparts definitely understand the importance of the task at hand.

Some of the trainers and handlers in Pick of the Litter have been at it for years. Some are fixers, specializing bringing pups in danger of flunking out of the program back from the brink. Others, like Nick, a high school teenager, are taking their first crack at training a dog. Some approach it like a serious profession proudly touting the number of times they’ve successfully raised guide dogs in the past, while others, like Adam, a military veteran, see the program as something that gives them a greater sense of duty and self worth. While the dog might not understand at such a young age that they’ve failed at something, Pick of the Litter shows how the trainers can be both proud and quietly devastated by a puppy’s evaluations at the same time. Not all the animals can become guides, but all of the humans involved would love to know that they’re responsible for raising a dog that can change someone’s life.

I’m a big softie by nature, and not even that much of a dog person, but I have no shame in admitting that I was either crying or on the verge of tears across the entire running time of Pick of the Litter. Nachman and Hardy know exactly what buttons to push and how to make their film moving and inspirational without appearing manipulative or overly melodramatic. Dogs, like people, have different personalities, and the filmmakers flesh each of the five puppies out as if they were people. Viewers will quickly draw attachments to each of the dogs and the handlers alike, and the ultimate outcomes are unpredictable and sometimes sudden. A dog can be let go at any time, and those who seem to be doing either well or poorly can turn things around the very next day. It’s an overwhelmingly emotional experience. Each of these trainers gets choked up and moved by their caring for a single dog. Pick of the Litter makes viewers feel the same thing five times over.

Pick of the Litter isn’t the type of documentary that many critics take notice of, and that’s kind of a shame. It’s not political, international, incendiary, or even all that much of a curiosity. It’s not about people overcoming adversity, a story that’s too incredible to be believed, and it’s not a movie with heroes or villains. Pick of the Litter is simply about humans and animals working together for a common good, and the rare kind of documentary that lends itself well to an intriguing and atypical story structure that crackles and impresses like a grand work of fiction. It’s virtually impossible to not become enthralled and moved to tears by Pick of the Litter. It’s a great movie to close out the tumultuous year that has been 2018.

Pick of the Litter opens at The Hot Docs Ted Rogers Cinema on Friday, December 21, 2018. It’s also available on iTunes.

Check out the trailer for Pick of the Litter: