Review: Falls Around Her 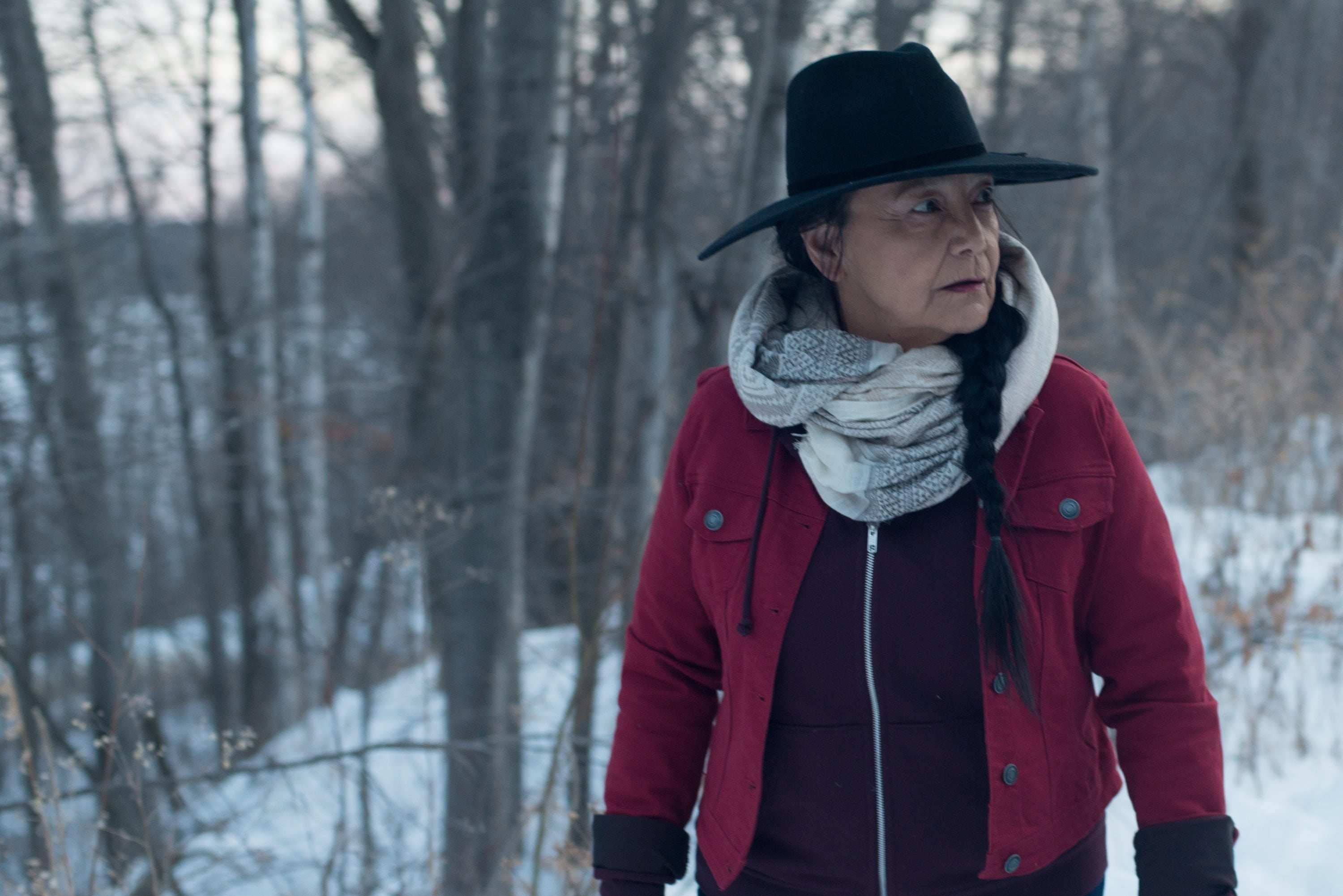 Although it’s somewhat surprising to realize, writer-director-producer Darlene Naponse’s Falls Around Her marks the first time actress and Canadian film industry mainstay Tantoo Cardinal has been cast in a leading role during a career that has spanned four decades. While the recognition is long overdue, Falls Around Her proves to have been worth the wait, with Naponse facilitating the best performance of Cardinal’s career in a film that rises and falls almost entirely on the actress’ talent for dramatic understatement.

Cardinal stars as Mary Birchbark, a successful folk singer who’s spent her career travelling up and down the road with her backing band, The Nightmare. One night, in a bid to get away from her longtime manager (Rob Stewart), she quietly slips out at the end of a show and leaves without telling anyone where she’s going. The Anishinaabe singer returns to the reservation of her youth on Northern Ontario’s Bear Island. While her family and friends are happy to see Mary back in town, the singer prefers to be left to her own devices. Even when the spring thaw arrives, Mary redoubles her efforts to remain isolated from the rest of the community. Mary suspects that someone has followed her to her secret getaway, and evidence begins to mount that she might not be as alone as she thinks.

Falls Around Her has a unique and mostly successful dramatic structure. While Ojibway filmmaker Naponse (Every Emotion Costs, Cradlesong) is ostensibly building towards something akin to a stalker thriller, Falls Around Her invests more in character details and relationships than it does twists and red herrings. The main pleasures of Naponse’s latest lie not in eerie chills or scare tactics, but rather in watching Mary reconnecting with and contrasting the world she left behind to pursue success. Although Mary is a character seeking solitude, it’s her interactions with family and locals that satisfies more than Naponse’s thriller elements.

Mary’s sisters and niece and a seemingly kindhearted local (Johnny Issaluk) – who might be either a potential love interest or secret tormenter – aren’t interested in Mary’s successes or failures. Through years of struggle as an indigenous woman in the entertainment industry, Mary has become closely guarded and tight lipped, often repressing deeply rooted pain under the guise of an obviously phony smile and a matter-of-fact attitude towards potential setbacks and the pitfalls of living in the bush. Those close to Mary think that she might be going “bush crazy,” but Naponse and Cardinal delicately make it known that the character’s feelings are both valid and overstated. Mary isn’t going crazy, but she refuses to talk about anything that’s specifically bothering her, which might be even worse. 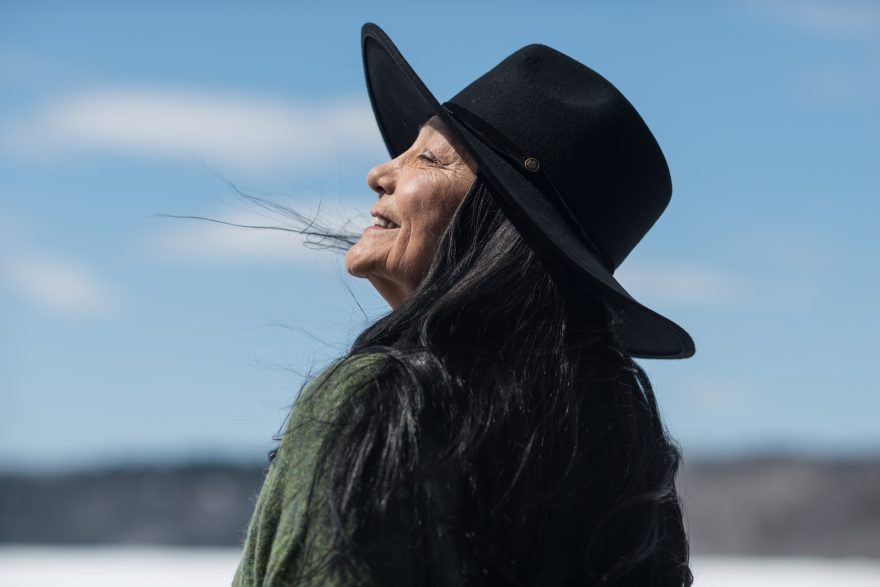 Watching characters with post traumatic stress and professional exhaustion struggling to keep up appearances isn’t anything new, but Naponse has created something remarkable by equally balancing the solitary and insular battles faced by Mary with an outside support system that wants to help, but also respects the main character’s wishes to be left alone. Falls Around Her exemplifies this push-and-pull most brilliantly via a contentious end to a family fishing trip that leads to a heated argument about Mary’s well being. Mary appreciates her family’s concern, but she wants to be left alone and isn’t ready to talk, even after months spent with little to no human contact. Moments after the argument, everyone is laughing with each other once again. It’s clear that the concerns still remain, but everyone has said all they care to at that particular time. A number of delicate emotions are cycled through in this one sequence, and they’re all expertly portrayed by the cast and Naponse’s perceptive script.

Mary’s family and friends aren’t witnesses to the internal and external struggles that the character is going through, so it’s up to Naponse and Cardinal to make sure that the audience understands what’s going on as subtly as possible. Falls Around Her spends just as much time with Mary in her self imposed isolation as it does with the begrudging and sometimes uncomfortable time she spends in the company of others, and the moments where Cardinal is left to her own devices as a performer are just as captivating as the chemistry she shares opposite her co-stars. Cardinal understands that Mary is well versed in the art of performance, but whenever the character is by herself, that’s when the audience gets glimpses of her true nature. The only moments of unrepressed joy, excitement, terror, rage, or sadness experienced by Mary occur when she thinks no one is watching. It’s a thoroughly captivating turn from Cardinal, and one that should hopefully lead to more starring roles for the veteran, award winning performer.

Cardinal holds things together nicely, and Naponse does a great job capturing the natural beauty of Northern Ontario and visually and sonically contrasting it to the life that Mary has lived up to this point in the character’s life, but Falls Around Her still leaves some key and potentially interesting elements underdeveloped. While the film initially and intriguingly seems to have a resolutely female perspective, that thread gets lost a bit when more male characters are added, and even the initially strong familial relationship gets dropped when Fall Around Her shifts into more standard thriller territory. There’s a weakly drawn subplot about a mining concern infringing on indigenous land rights that could add some social context, but it’s ultimately only there as another potential suspect for Mary’s paranoia. There are a pair of romantic interests for Mary, but neither makes much of an impression, and one feels like dramatic padding, while the other is used as a potential suspect. Perhaps most unfortunate of all is the film’s climactic reveal, which is obvious, heavily telegraphed, thinly developed, and curiously unsatisfying when one takes into account everything that came before it.

Relatively minor missteps aside, Falls Around Her succeeds overall thanks to Naponse’s emotionally credible script, her strong sense of direction, and Cardinal’s layered performance. It’s the kind of film that would work better with a bit more running time to flesh things out a bit more, but is still captivating enough on its own modest and thoughtful terms.

Falls Around Her opens at Carlton Cinemas in Toronto on Friday, March 29, 2019. It also screens for one night only at TIFF Bell Lightbox on Wednesday, March 27 with an introduction and post-screening Q&A with director, writer, and producer Darlene Naponse and lead performer Tantoo Cardinal.

Check out the trailer for Falls Around Her: