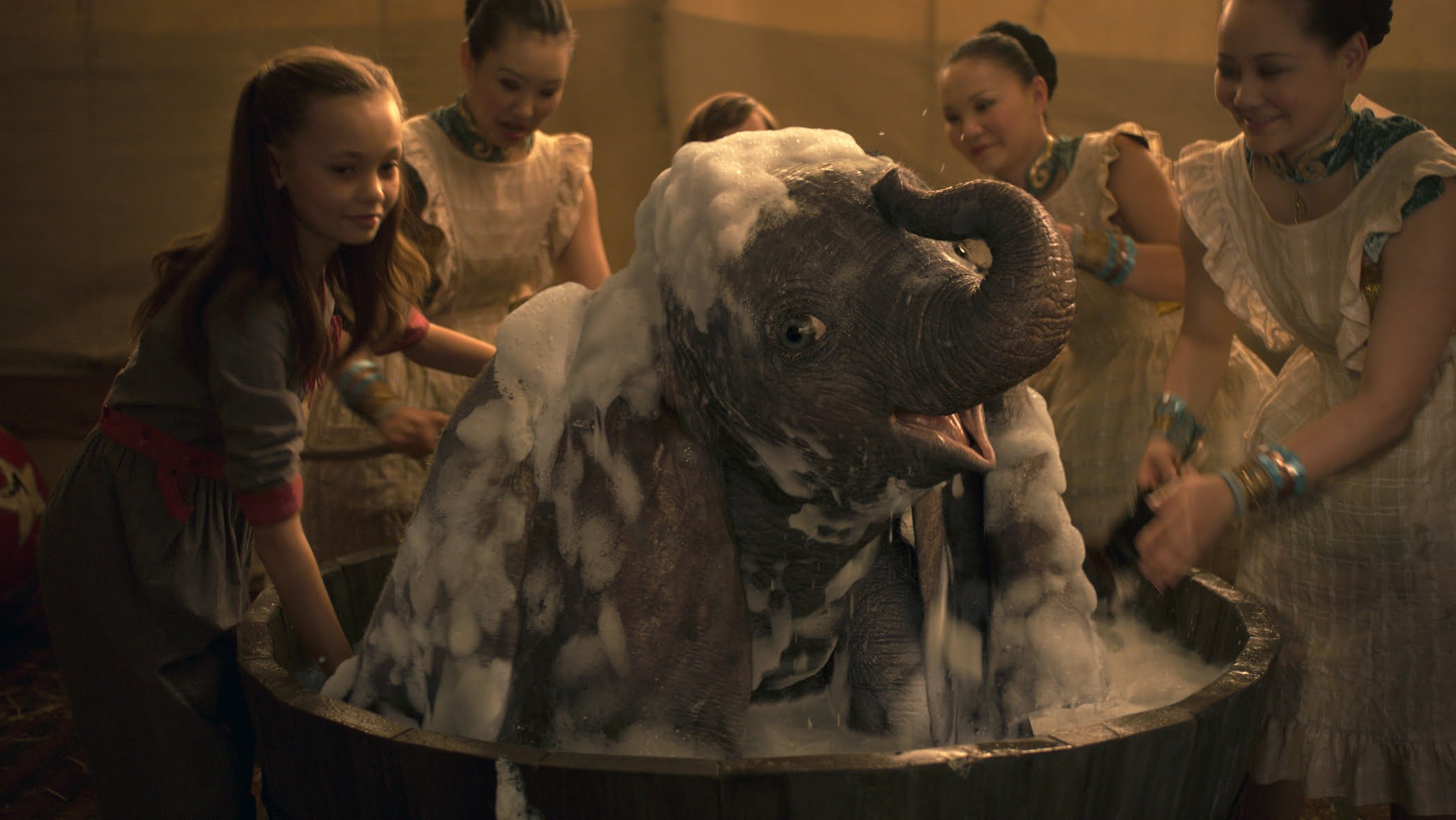 Tim Burton’s unnecessary, but generally and generically entertaining live action remake of the Disney animated feature Dumbo is the definition of a film that’s “fine for what it is.” Dumbo doesn’t improve on its vastly shorter animated predecessor (which, come to think of it, is B-grade Disney magic to begin with), but it doesn’t tarnish any reputations. It’s an overstuffed Hollywood blockbuster made for an age of remakes and sequels, but the padding is all rather fluffy and charming. Burton gets a chance to imbue this candy coated tale with some of the darker sensibilities that some of his recent studio blockbusters have lacked, but there’s nothing particularly revolutionary about the film’s spookier bits. Depending on your mood, Dumbo will either be seen as “better than expected,” “completely forgettable,” or “the reason why everything stinks in Hollywood.” None of those reactions are necessarily wrong, but the kiddies that will eat this up won’t care in the slightest.

American veteran and horse trainer Holt Farrier (Colin Farrell, doing an ill advised attempt at a southern accent) returns home from World War I to his loving son, Joe (Finley Hobbins), and older, science obsessed daughter, Milly (Nico Parker). During his time overseas, where he lost an arm on the battlefield, much has changed for the Farrier family. Their beloved wife and mother has passed away, and the travelling circus they perform in – under the employ of the kind, but shady Max Medici (Danny DeVito) – has sold Holt’s prized stallions to help make ends meet. Desperate for work, Holt begrudgingly agrees to take a job as the circus’ elephant handler. Max’s latest purchase – an enormous, pregnant elephant – gives birth to a baby with abnormally large ears. The elephants are separated after the mother tries to protect her son from harm, and Holt is tasked with figuring out how to make the supposedly hideous looking Dumbo into a successful solo act. Milly and Joe discover that Dumbo’s large ears enable the elephant to fly, and quickly their struggling circus becomes must-see entertainment. The flying elephant captures the eye of V.A. Vandevere (Michael Keaton), a titan of Coney Island who wants to incorporate Dumbo’s abilities into his own show, opposite his prize trapeze artist and main squeeze, Colette (Eva Green, in a part that’s well played, but thankless). Medici agrees to an join forces with Vandevere, but it quickly becomes apparent that the industrialist doesn’t have Dumbo or the circus performers’ best interests at heart.

It’s not surprising that a live action remake of Dumbo would have to find human characters to act as focal points, but Burton and once-promising-but-now-somewhat-hack-y screenwriter Ehren Kruger (Arlington Road, Scream 3, and three of Michael Bay’s Transformers movies) naturally build off the whimsy that comes from carnival atmospheres and seeing an elephant doing impossible feats of flight. Clunky and corny dialogue aside, Burton’s Dumbo gets off on the right foot, mostly through the power of visual storytelling and wonderment alone. Many of the film’s best moments are incidental ones that don’t necessarily forward the plot, but say a lot about the characters and their love for each other. Most of the films best sequences happen early on, and are told with minimal dialogue, allowing the actors to convey genuine emotions without spelling them out. There are plenty of borderline dire moments in Dumbo where Kruger’s script delivers lugubrious exposition in painful, audience insulting detail, but Burton and the cast are more than capable of finding the sweet spots in the wonky material.

The gorgeous, eye popping colours of the bucolic American midwest and the glitz, glamour, and overlit overkill of Vandevere’s amusement park are visually accomplished, but the settings enhance the drama and humour of the story rather than distracting from it. In terms of style, it’s doubtful that anyone other than Burton at the top of his creative and artistic game could’ve pulled off such a balance. Dumbo looks every bit like a fable should, and Burton and his team are putting in the heavy lifting that the script can’t help with. Dumbo is every bit a director’s film, and while the results aren’t up to the standards of Burton’s best, one shudders to think what could’ve been if one of Hollywood’s most prolific and bankable oddballs hadn’t been behind the camera. 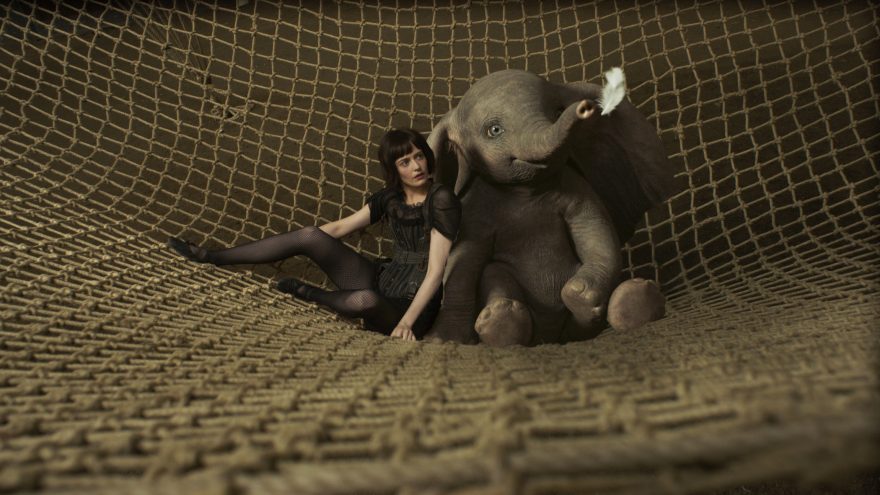 Everything about the original film’s moral about embracing the differences in people and animals is mostly retained, but once Dumbo makes its way to Vandevere’s gaudy pleasure paradise, it becomes almost self-critical. Keaton emerges as the stand-out member of the cast, going wildly and deliciously over the top as a greedy blowhard who isn’t nearly as visionary as he thinks he is, and it’s hard not to think of the character and the actor’s performance as resolutely tongue-in-cheek. Dumbo might be the first of Disney’s live action reboots to comes with a sense of self-awareness.

Next to the impressive effects used to bring Dumbo and the highly detailed sets to life, the most interesting thing about Burton’s film is the director’s decision to – either consciously or unconsciously – make his film into an examination of cinematic history. DeVito feels like a stand in for Walt Disney, himself: an imperfect showman who cared about those around him. Keaton’s villain, on the other hand, represents a new breed of entertainment industry executive; someone who keeps adding more and more to his already overstuffed and lucrative plate without asking if it’s every becoming too much to handle. Vandevere’s park is depicted as a hodgepodge of thrill rides, attractions, exhibitions, and branding that seems ungainly. Both impressarios have been fighting for the same showbiz dollar and have entered an uneasy alliance that could destroy both of them. It’s hard not to subconsciously see the plot of Dumbo as something that mirrors the current state of the Disney empire and its growing pains.

But while all of that will be interesting to a handful of people who would actually care about such things, it also underlines why Burton’s Dumbo is just passable entertainment at best. Dumbo himself is a wonder to behold, but probably won’t be remembered as one of the best CGI characters of all time because he only does what’s expected of him. There’s no spontaneity or risk to be found here. The subplot involving DeVito and Keaton gets the lion’s share of laughs and chuckles, but everything involving Farrell and his family is forgettable, cliched, and thin. Dumbo is also paced like a film that has had about fifteen to twenty minutes cut from the final running time, with hints that subplots involving other characters in Medici’s circus have been lost along the way. Burton clearly makes some of these people seem like big deals at various points, and when they pop up to help key scenes along, one wonders if there was something they missed along the way. I assure you that you didn’t miss it because it wasn’t there to begin with, but it definitely makes Burton’s unnecessary epilogue to the film even more awkward and out of place.

As a childlike fantasy, eye candy, and a reuniting of Keaton, DeVito, and Burton, Dumbo works just fine. As entertainment, it’s okay, I guess. It wasn’t boring, and its successes and shortcomings are almost too slight to dwell upon either way. It’s a pretty, passive work of cinema that will likely make a mint at the box office and won’t be doted upon too strenuously by anyone over the age of eight once the house lights go up. It’s a piece of studio product that has been designed with love and care, but is ultimately built for the faintest of praise.

Check out the trailer for Dumbo: