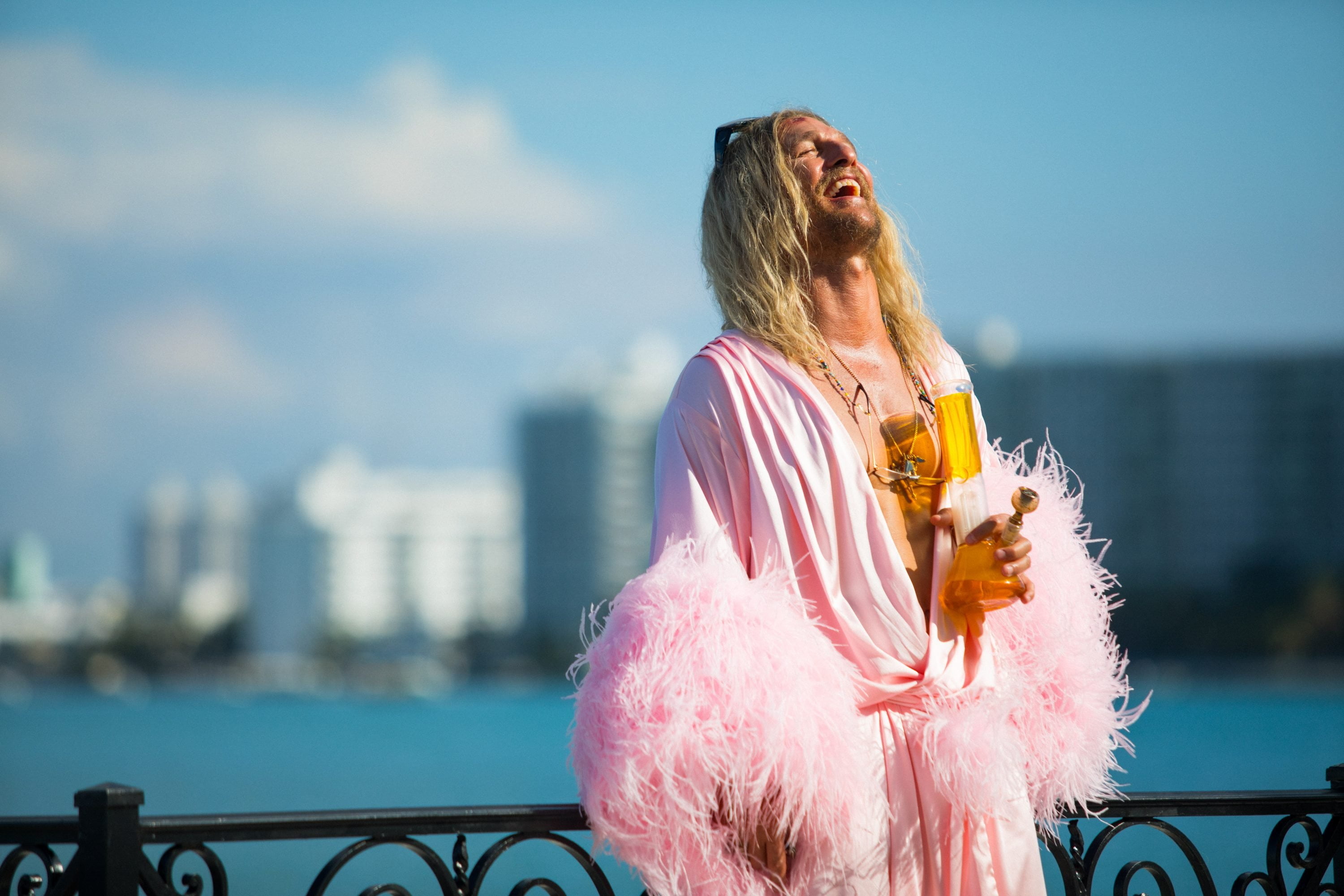 There’s a moment early on in The Beach Bum, the latest film from polarizing, boundary pushing auteur Harmony Korine, where the permanently intoxicated main character admonishes his date that she shouldn’t be insincere to strangers. It’s a telling line of dialogue that ultimately backfires on the Spring Breakers, Gummo, and Trash Humpers director. The bits that work best in The Beach Bum are the ones where Korine is being as insincere and irreverent as possible. Unfortunately, Korine’s latest is an uneasy meshing of his outsider sensibilities with a more commercial project, leading to a film made by a master provocateur that has no lasting impact whatsoever outside of a handful of decent laughs. Korine is at his most interesting (if occasionally off putting) at his most inscrutable and controversial. The Beach Bum is surface level and shallow every step of the way; a halfhearted attempt that exists uneasily between two worlds.

The Beach Bum concerns Moondog (Matthew McConaughey), a once “great” and relatively wealthy poet who lives out a quixotic quest to stay drunk and high all the time. He bums around Key West, impressing tourists like he’s everyone’s friend, but his good times are put temporarily on pause so he can return back to his understanding, patient wife, Minnie (Isla Fisher), in Miami and help plan the wedding of his adult daughter (Stefania LaVie Owen). Minnie and Moondog’s closest friends all believe that this seemingly burnt out manchild still has greatness within him, but it’s going to take a life altering event that leaves the writer destitute and a series of interactions with a variety of equally odd people for him to get his literary mojo working again.

There are two huge problems that sink The Beach Bum and Korine’s “good vibes only” tone. At the outset, The Beach Bum plays out as if the whole thing is going to follow Moondog through a various set of loosely linked and outlandish conversations and adventures; something that Korine could’ve knocked out of the park. To give Moondog’s arc an actual plot – and one that asks the viewer to feel sorry for a patently unlikable protagonist – is a woeful miscalculation. Not every patch of The Beach Bum pertains directly to Moondog’s relationship with his wife and daughter, but an early twist makes Korine’s corny and conventional storytelling gambit omnipresent and inescapable. It’s never all that interesting or well developed, but the entirety of Korine’s work here hinges upon it and the sincerity of its delivery to the audience. Korine is the absolute last filmmaker on earth that should be dabbling in sincerity, and the film’s moments of forced enlightenment are half-hearted at best and eye-rolling at worst. Even if Korine’s point was to make viewers question the overall “heart on its sleeve” tone of The Beach Bum, it’s delivered with no conviction whatsoever.

The other major problem with The Beach Bum is McConaughey, who might be too likable of a performer to play someone as self-involved and oblivious as Moondog. Granted, McConaughey has the whole permastoned act down to a science, and if the film were a little looser in its aims, his portrayal of the PBR and novelty bong loving Moondog might’ve worked.

There’s a major disconnect between Korine, his script, and the film’s star. While it’s refreshing to have a film built around a main character where what one sees is what one gets – even if that person happens to be rather icky and problematic – the major story shift that turns things somewhat serious is one that the actor can’t pivot into or out of. McConaughey becomes resolutely one note, and when that one note is a perpetually annoying one, and the character itself has few redeemable or charming traits, the film around him becomes a slog. I’m sure that McConaughey is doing precisely what the film asks of him, but he’s doing too much of it. It’s like watching a dull film where Nicolas Cage simply plays Nicolas Cage, but on autopilot. This role requires an actor that’s capable of taking a leap of faith with the character and going against what the director wants, and McConaughey isn’t that kind performer, no matter how much he looks and sounds the part. It’s a far too comfortable turn in an uncomfortable, uneven film.

The only times when Korine and McConaughey approach greatness are with the film’s vastly more impressionable and memorable side characters. Again, if one were to ditch the plot entirely and watch a series of random interactions between Moondog and people crazier than he is, The Beach Bum would’ve been a classic piece of outsider art. That’s not the film we get, and what we’re left with is something that only amuses in fits and starts.

Snoop Dogg has a choice, droll, and relatively high profile role as a rapper and Moondog’s closest confidant. Zac Efron, whose comedic chops are vastly underrated (and who probably would’ve made a more interesting lead than McConaughey), brings a bug eyed intensity and bottomless douchiness to a paint huffing, Jesus loving pyromaniac that Moondog meets in a court ordered rehab program. Jonah Hill channels Truman Capote for his role as Moondog’s flaky, greedy, and horny agent. Best of all is Martin Lawrence, who should see a career resurgence with his performance here as a Vietnam vet tour boat captain with an unhealthy obsession with dolphins. Lawrence’s performance here is a master class in the power of repetition and timing to sell a gag, and his portion of the film is almost worth the price of admission alone.

It’s just a shame that The Beach Bum is such a drag whenever those tangential characters aren’t the focal point, and that Korine ultimately backs into a conclusion that’s both self-aware and the result of the film’s worst narrative impulses. The final scenes are meant to be a proudly raised middle finger to the story’s more conventional beats, but it’s also a shockingly predictable and unfunny embracing of everything that’s wrong with The Beach Bum post-twist. There are only a handful of ways Moondog’s journey could end, and Korine goes with the dullest and easiest one. It’s a film that pats itself on the back simply for existing, which is par for the course by Korine standards, but completely unearned here.

Korine’s latest is a film at war with itself: it wants to be a grand ol’ party full of bizarre ups and downs, but it can’t decide if it wants to align itself with the alarmingly rich and privileged Moondog or the skid row types the audience and main character would rather be hanging out with. It’s also a narrative based in complex emotions made by an auteur who couldn’t process any natural human emotions if you handed him a step-by-step instruction book on how to do so. Ultimately, The Beach Bum has interesting elements, but it’s also Korine’s emptiest and least impressionable film. Considering that most of Korine’s films make viewers feel unclean, angry, or intoxicated, it’s disappointing that The Beach Bum likely won’t make them feel much of anything at all. It’s accessible by Korine standards, but at what cost?

The Beach Bum opens in theatres everywhere on Friday, March 29, 2019.

Check out the trailer for The Beach Bum: