An enjoyably casual stroll down one of music history’s more literal memory lanes, Canadian filmmaker Ron Mann’s latest documentary, Carmine Street Guitars, looks at one of New York City’s most curious and enduring cultural institutions. There’s no drama to be found. The only political or sociological message to be found is about one man’s ability to carry on in a city that seems to have been rapidly passing him by for several decades now. There’s no archival footage, and on camera interviews are as relaxed as they come. Carmine Street Guitars, much like the titular shop Mann spends time in, doesn’t need to look fancy to succeed. It just has to give the person who’s stopping by for a visit something they can’t get anywhere else.

Owned and operated for decades in Greenwich Village by Rick Kelly, Carmine Street Guitars specializes in custom made instruments crafted from reclaimed wood. All of Rick’s guitars are made from lumber pulled from some of the city’s most famous (and in many cases, sadly demolished or damaged) homes and businesses from the 1800s or earlier. Hand crafted with minimal help from power tools, Rick’s guitars are highly coveted by the musicians who own them for both aesthetic and sonic reasons. Tucked away on a relatively quiet street amid constant construction and gentrification, Carmine Street Guitars doesn’t seem like it’s going anywhere in a hurry, nor does it ever look to expand operations. Run only by a three person team – Rick, his 25-year old apprentice, Cindy Hulej, and with his elderly mother, Dorothy, answering the phones, doing the books, and keeping things tidy – Kelly’s passion has built one of New York’s most fascinating independent businesses; a place that’s both modern and forward thinking in its design goals and yet delightfully out of step with the rest of the city and the music industry.

Mann starts Carmine Street Guitars on a bright and sunny Monday in the summertime and spends a week hanging out alongside Kelly, his crew, and any musicians or customers that will swing by the shop. Unlike most artisanal shops in NYC, Carmine Street Guitars isn’t the kind of place where twentysomethings are lining up around the block to get in or old school musicians are banging on the doors to get something done in a hurry. The film, much like Rick and his shop, are laid back, unassuming, and relatively quiet. The film opens with Rick and Cindy working independently in the back of the shop without saying much of anything, and one gets the sense that this is how day-to-day life is at Carmine Street Guitars. 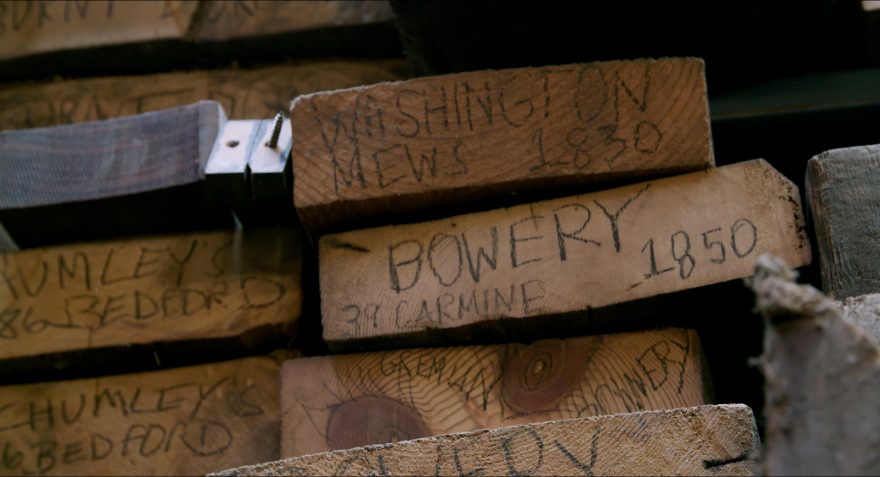 Mann doesn’t have to do much heavy lifting to convey the history and personality of Kelly and the shop. Carmine Street Guitars is the type of place that comes across brilliantly on film. Most of the surfaces are fading greens and browns. Everything is well worn, well used, and well loved. One can practically smell the aroma of sawdust and shellac in the air just by looking at the place. The shop and the unique guitar creations are almost the primary attractions in Mann’s film, and that’s not necessarily a bad thing. Carmine Street Guitars makes the shop look some inviting and cozy that one just naturally wants to spend some time there browsing around and chatting it up.

Instead of staging standard interviews himself, Mann defers to some of Kelly’s high profile clientele to grill the shop owner and his apprentice on any number of topics. Sometimes the chats end up being small talk, sometimes they’re nostalgic, sometimes they’re serious. Some provide background details and others get to the heart of Rick’s operation and the love he has for his job. These musicians – including the likes of Jamie Hince, Jim Jarmusch, Bill Frisell, and Christine Bougie, just to name a few – pop in for their own reasons and stick around to chat. There’s clearly some direction and scripting being given here (or else there wouldn’t be much of a movie), but for the most part the dialogues are off the cuff and natural. In these moments, Kelly’s infectious love for his job shines through perfectly. Here’s a man who generally seems to keep his emotions in check at all times, but he still gets giddy at the prospect of a famous musician handling, playing, buying, or being gifted one of his guitars.

Carmine Street Guitars is akin to a meditative experience. It breezes along effortlessly, giving viewers time to take it all in and appreciate the shop and it’s dedication to preserving pieces of the city’s history. Every plank of wood rescued from the garbage pile comes labelled with the building it came from. Every tool has a story. Rick Kelly would be happy to tell you all about them if you ask, and since most of us won’t be able to make the trek down to the shop, Mann’s film is the next best thing. Guitar and gear nerds will love the intricate jargon being thrown around, but even if you’ve never played an instrument in your life, there’s a lot to love here.

Check out the trailer for Carmine Street Guitars: