One of the most unnecessarily mean spirited, unfunny, unassured, and cynical comedies in quite some time, Little takes a tried and true genre formula that often yields feel good results and squanders it on pettiness and lame gags. It’s another one of those movies where a character suddenly finds themself magically transformed back into their childhood self to learn a lesson about being a better, stronger, and more confident person. It’s a reliable enough high concept plot line, but Little struggles mightily despite its talented cast, who do all they can (sometimes even far too much) in service of truly ugly material that isn’t worthy of any of their talents. It says a lot when the patently implausible idea of an adult reverse aging is more easy to buy into and believe than any of the characters, their personalities, and their problems.

Bullied as a kid for being smarter than everyone around her, the wealthy “Tech Empress of Atlanta,” Jordan Sanders (Regina Hall), decided long ago that the key to never being pushed around or walked over is to beat everyone else to the punch. A tyrannical, dangerously neurotic, and obviously insecure boss, Jordan rules her staff of app programmers through intimidation, insults, and threats. The only person in the office with even a slight affinity for Jordan is her long suffering personal assistant, April (Issa Rae), and even she’s getting tired of being treated like a doormat and never being able to share her product ideas. On one particularly ornery morning, Jordan’s temper runs afoul of the magic loving daughter of a food truck owner (Marley Taylor) who wishes with her wand that April’s jerk of a boss was a little kid again. Jordan wakes up the following day to find out that she’s back in the body of her 13-year old self (Marsai Martin), complete with frizzy hair and thick rimmed glasses. Although Jordan remains as demanding as ever towards her assistant, April has few ideas on how to fix her boss’ unusual problem. While she searches for the little girl in hopes of getting her to reverse the spell, April is tasked with running the company during a make or break period, while Jordan – through a series of karmic and convoluted events – is forced into going back to middle school to deal with a new set of bullies and help a trio of awkward outcasts regain some self-respect.

Little is the type of film that only knows one emotion and one setting, and that’s to be perpetually petty and shrill. Any narrative about a jerk learning to be a better person needs to be surrounded with likable characters that can offer a counterpoint to the toxicity on display, but director and co-writer Tina Gordon Chism (Peeples) instead offers up far too many characters that are bigger jerks than Jordan and bland, one note cliches in place of authentic heroes worth rooting for. When the main character of Little is so potent that she makes Anna Wintour look like someone who stays home all day to take care of rescue kittens, doubling down on toxic behaviour, tiresome insults, and offensive jokes (including some uncomfortable jabs at disabilities and one transphobic line that actually elicited a couple of boos from the audience at my screening) makes for a really depressing slog instead of a joyous romp. The characters are so outlandish and unrelentingly nasty that they feel unbelievable, and the heroes are limp, ineffective, and underdeveloped cutouts, so investment in their troubles proves to be virtually impossible.

With no interesting and few likable characters to follow, Little can only lean back on its sense of humour, which is comprised of adults being mean to other adults, adults being mean to kids, kids being mean to adults, kids being mean to other kids, set pieces that make precisely zero logical or narrative sense, stale pop culture references that are aging poorly by the second, a plethora of running gags that mostly go nowhere and have no satisfying payoffs, snooze-worthy jokes about male eye candy (which the film implies is something all women totally need and can’t live without), and all of the characters being as annoying as humanly possible. There are few moments in Little that aren’t built upon Chism and co-writer Tracy Oliver being as brash and uncaring as possible. Whenever Little tries to mustre up anything even close to sincerity, not only does it ring hollow, but it’s practically see through. Much like the apoplectic character at the centre of the film, Little expends so much of its misplaced energy by trying to be as edgy as possible (at least within the parameters of what’s being marketed, idiotically, as a “family friendly” comedy) that it forgets to make any of the shouting, taunting, and bullying mean anything. 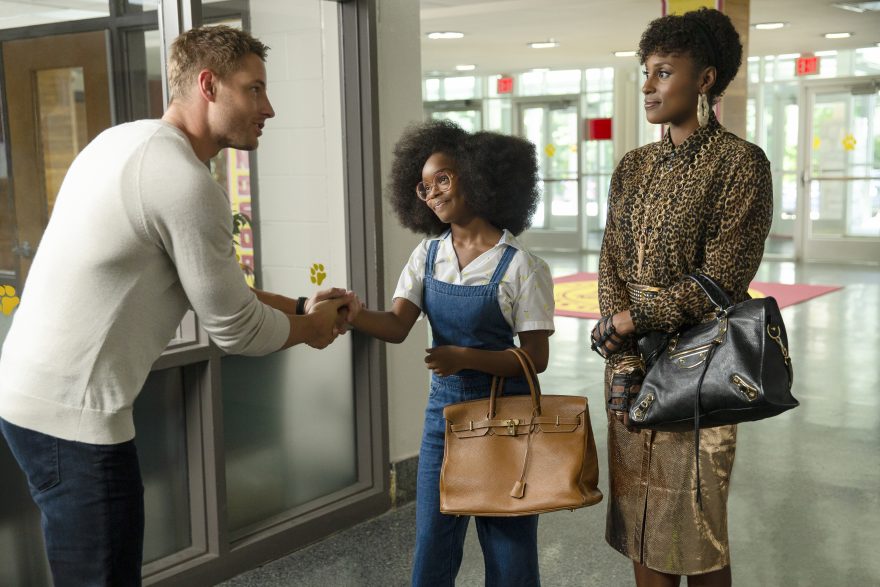 I genuinely laughed once – at a throwaway gag involving a hapless stoner – and chuckled a few times, but none of those fleeting moments of mirth had anything to do with Chism’s material or direction. Little earns a trace amount of goodwill on account of its three leads. They have little to no comedic chemistry together, Rae has almost nothing to work with, and Hall and Martin never credibly appear to be playing different versions of the same character (despite both of them being listed as producers), but on their own they each have impeccable comedic timing.

Not that you’d know that these people are actually talented from Chism’s horrifically edited and bafflingly paced final product, which cuts between punchlines and setpieces so ineptly that it’s like watching a Family Guy episode where all the segways between skits have been cut for time. It’s also uncertain if Little takes place over the course of days, weeks, or months, but if Chism and editor David Moritz can’t be trusted to properly frame an actor’s punchlines or find a way to transition between a regular lunch conversation and a whiplash inducing musical number, why should they care about establishing anything at all? I wouldn’t say that Little is arriving in theatres in unwatchable condition, but rather in barely releasable condition.

Little wastes all three of its leads (not to mention its forgettable cast of supporting characters, both young and old) and any efforts they might’ve made to turn a script this turgid into something that could’ve been intermittently funny. Watching everyone flop and flounder here with maximum effort as Chism struggles to package it all together makes for one of the most depressing and soul crushing comedies I’ve seen in quite some time. All three leads deserve better than this, and I sincerely hope they get it sooner rather than later, especially Rae who sometimes seems openly disinterested in delivering stock, witty banter that sounds like it’s one step away from resorting to “Yo mama” jokes and a romantic subplot that her character seems to care less about than the filmmakers do.

Watching jerks and bullies doing battle with slightly bigger jerks and bullies in a film where no one learns much of anything by the time it all wraps up is tedious. Little is a film that had a low bar to clear in terms of entertainment value, but instead of going over it, or even under it, the filmmakers chose to dig a hole and tunnel under the entire apparatus. It’s the type of film that doesn’t need a review. It needs a sobering post mortem.

Check out the trailer for Little: