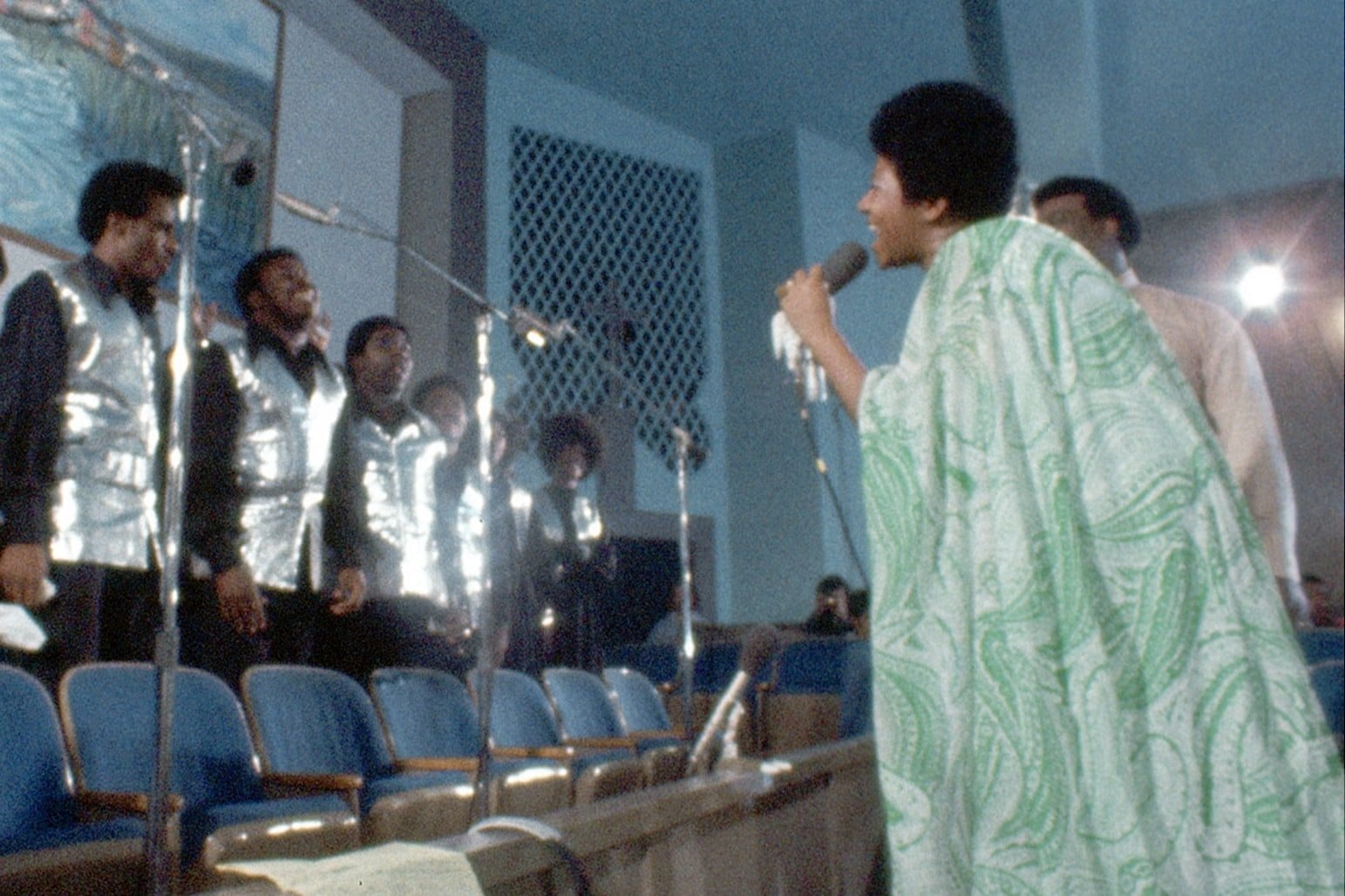 Amazing Grace, a recently completed concert film that took nearly fifty years to come to the big screen, captures music icon Aretha Franklin both in the prime of the late singer’s illustrious career and delivering a deeply personal album that lesser artists at the height of their fame might otherwise shy away from. While the music contained within Franklin’s live gospel album of the same name is unquestionably some of the soul singer’s best, the story of how Amazing Grace is only now making its way to theatres is arguably more interesting than the documentary itself.

Amazing Grace – the movie – was filmed during the recording of the live album of the same name in 1972 at the New Temple Missionary Baptist Church in the Watts section of Los Angeles, California. The project was commissioned by Franklin’s label, Atlantic Records, to hopefully become a television special and a longer theatrical cut to play as a B-picture in double bills. Directing duties for capturing the two day concert and recording session were handed over to then up-and-coming filmmaker Sydney Pollack, who would later go on to direct the likes of Tootsie, Out of Africa, and The Firm. The album would rack up numerous accolades and awards, but the documentary would become one of the most famously unfinished projects in Hollywood.

For a variety of technical reasons, most of them tied to an inability to sync the film’s soundtrack to the image, Pollack was unable to do much with the footage he shot for Amazing Grace. He’d revisit the film every now and then, but Amazing Grace looked to be a lost cause. As the years went by, Pollack had all but given up; as had Warner Brothers, the parent company of Atlantic, who locked away all the once thought unusable material in their vaults. In 2007, roughly one year before Pollack’s passing, former Atlantic employee Alan Elliott (who first got wind of the unfinished film in the early 1990s) was able to get the director’s permission to buy the film’s rights and complete Amazing Grace with the help of new technologies that could eliminate the audio issues that plagued post-production.

The restoration of Amazing Grace took years and thousands of working hours to complete, and in 2015 Elliot, now listed as a co-director, was ready to share the film with the world. That is, until Aretha Franklin sued to Elliot to block the film’s release. Scheduled screenings at Telluride and the Toronto International Film Festival were immediately cancelled due to the litigation. After Franklin’s passing last year, Elliot and the film’s distributor were able to come to an agreement with the singer’s estate, and Amazing Grace now arrives in theatres for a wholly appropriate Easter release.

On one hand, I can see why Franklin had some issues with showing Amazing Grace to a paying public, even though she never publicly gave specifics as to why she was less than thrilled with the results. It’s certainly not much to look at, and it’s clear from nearly every shot that Pollack might’ve understood how to make a documentary, but was relatively clueless when it came to mounting a concert film. Even with the footage being restored to the best of Elliott’s ability, it’s grainy, shaky, and sometimes even out of focus.The church itself also isn’t the most photogenic place in the world, with visibly peeling and chipping paint and visibly dirty and distracting window just behind Franklin and her backing vocalists, The Southern California Community Choir.

It’s also a weird event to film in the first place because it isn’t a traditional concert that’s being given by Franklin. Amazing Grace doesn’t convey what a riveting stage presence Franklin could be. Instead, the film gives a glimpse into something near and dear to Franklin’s heart and the resolute focus she would show in the recording booth. Other than singing her heart out, occasionally playing the piano, and sweating buckets while doing it, Franklin’s performance is relatively static. (On the other hand, her closest on stage collaborator, Reverend James Cleveland, is far more energetic, animated, and sweaty, offering a few nice moments of jovial, comedic relief.) 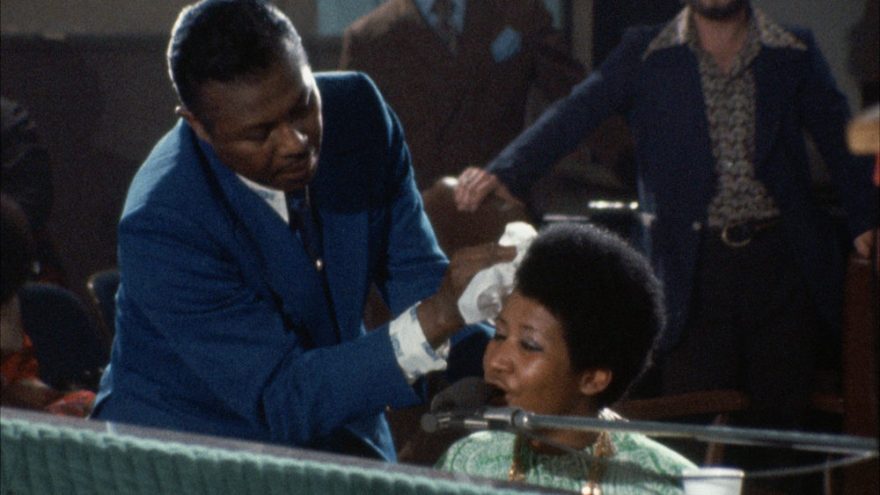 Despite proudly recording the album live in front of a church going audience (and Mick Jagger on the second night, who tucked himself into the back corner of the room), Franklin seems more focused on doing right by the music, the congregation, and the lord than she does with pulling out all the stops. It’s not the best look for someone who was recognized as one of the best and most mesmerizing stage performers of her time. It also didn’t have to look great. Amazing Grace was something Franklin did because of her beliefs and to honour her father, a reverend from Detroit. It almost didn’t have to mean anything to anyone else for her to be satisfied with what she accomplished. Amazing Grace displays a performance from Franklin that isn’t flashy, but one that shows the singer at her most confident and poised.

Be that as it may and as understandable as some of Franklin’s unspoken objections might’ve been, it’s those imperfections that make Amazing Grace all the more fascinating and captivating. Instead of looking like a polished version of a famous person delivering one of the most important concerts and albums of her career, Amazing Grace is like stumbling across an old can of film in a time capsule. There’s something intimate about being let into this world. If not for the footage, the only people who would’ve been able to say the watched the recording of Franklin’s most deeply personal album would’ve been the handful of attendees and musicians in attendance over those two nights in January 1972. Considering the album’s double platinum status and Franklin’s sterling reputation, there’s a natural curiosity surrounding the endeavour. Watching Amazing Grace is like being let into a secret club, albeit considerably holier.

The resyncing of the music to the footage of the performance is also nothing short of astonishing. It couldn’t have been easy for Elliott and his team to accomplish, given the state of the raw materials on hand, but the effort put in behind the scenes gives newfound layers to some of the album’s standout tracks. Like many live albums and concerts, Amazing Grace takes a couple of numbers to find its proper footing, but once Franklin launches into a rendition of Marvin Gaye’s “Wholly Holy,” the show doesn’t just catch fire; it explodes. From there and across standouts like “How I Got Over,” “Precious Memories,” and the iconic titular hymn, it’s like watching a performer in the grip of the angels and the holy ghost at the same time. Even for non-gospel fans, Amazing Grace is thoroughly captivating and fascinating to behold.

Amazing Grace might ultimately only appeal to a small, overlapping group of film buffs, musical historians, gospel aficionados, Franklin fans, and Christian filmgoers in the mood for something that isn’t hokey or patently terrible, but that doesn’t make it an unimportant text. Amazing Grace captures a moment in history that could never be recreated at any other time and with any other person. The album would still endure without the film, but all the background noise from the congregation would remain mysterious to anyone listening along at home. The film might demystify the album to some degree, but it also makes for a richer experience. Amazing Grace never supplants Franklin’s album. It only enhances it.

Check out the trailer for Amazing Grace: