Elisabeth Moss gives the performance of her career and possibly of the year in writer-director Alex Ross Perry’s unflinching and note perfect look at addiction, celebrity, and recovery, Her Smell. Uniquely structured and revolving around a volatile main character so purposefully abrasive and uncomfortable to be around that getting through some of the early going becomes a challenge, Her Smell never backs down from the nastier bits of rock and roll superstardom and the egotism and substance abuse that often fuels and soothes the personalities tasked with entertaining people. It’s a trip into the personal hell of a female band leader and everyone within her immediate orbit and their sometimes insurmountable quests back from the brink of complete and total emotional, physical, and spiritual annihilation. Her Smell isn’t a fun movie to sit through, but Perry’s latest is brilliant, moving without being cloying, and unlike any movie I’ve ever seen about people most tabloids would dismiss outright and unfairly as human trainwrecks.

Moss stars as Becky Something, the anarchic, flighty, and demanding frontwoman of a 90s all female punk rock outfit Something She. After some brief home movie footage showing the band reaching the height of their success and professional happiness, Perry heads backstage at one of their concerts to show the wheels coming off the gravy train. The aura surrounding the band has started coming off. It’s not confirmed in the film expressly, but sales are slipping and live shows aren’t drawing like they used to. A big reason for the band’s slow decline is Becky, whose work ethic has grown inconsistent on the best of days, and her attitude towards those in and around Something She is tyrannical, toxic, and confusing.

Although she’s still a brash and preening punker, Becky does some pretty inexcusable things even by rock star standards. She treats her fellow band members – played by Agyness Deyn and Gayle Rankin – with misplaced contempt and disgust; sometimes to their faces, but often behind their backs. She hasn’t had a sober moment in months. She doesn’t make any decisions without first consulting a huckster shaman (Eka Darville) that follows the band on tour. She has a young daughter with an increasingly flustered and thoroughly fed up former radio DJ (Dan Stevens), and from moment to moment it’s hard to tell if she adores the kid or her maternal instincts are all an act. She might see the toddler as just another fan to fawn over her. It’s also clear that the only person she holds in lower regard than her ex is her former lover’s new girlfriend (Hannah Gross). The band’s manager (Eric Stoltz) is growing increasingly panicked over Becky’s refusal to record a new album within a reasonable amount of time or take some gigs opening for a contemporary and former friend (Amber Heard) whose career is on the rise as Something She’s is in a bit of a creative and commercial rut. Through it all, Becky acts like nothing is wrong, and she lashes out at anyone who questions her genius or success.

Her Smell isn’t structured as a single continuous story, but rather a documenting of five specific moments in Becky’s life that show her hitting rock bottom and clawing her way out, told through lengthy, interlocking scenes that could each stand as their own short film. The first segment where Perry (Listen Up Philip, Queen of Earth) bounces around backstage between Becky’s antics and the understandably frustrated reactions of those surrounding her sets the tone of things to come in no uncertain terms. Perry all but hangs a glowing neon sign saying “abandon all hope ye who enter here” on the walls of the club’s backstage area.

Becky confidently commands everything and everyone around her, and like many abusive bosses who remain oblivious to their behaviour and enabled celebrities who are protected by those who think they’re geniuses, no one wants to tell her what she can and can’t do. Her Smell opens and continues down a bracing and fascinating path, examining unchecked power, success, and egotistical delusion. Trying to keep up with Becky’s reckless existence is like running a marathon while simultaneously doing cocaine and heroin throughout the race.

With each passing segment of Her Smell, Becky’s life and the band’s prospects grow bleaker. A fracturing occurs between Becky’s bandmates and their manager during a lengthy, futile recording process, where she also meets the label’s hot, new, all female, three member punk band, The Akergirls (Cara Delevingne, Ashley Benson, Dylan Gelula). These young women are honoured to meet and potentially record with their idol, but that goodwill and excitement quickly dissipates, and they realize quicker than mostly everyone else around Becky that she sees them as just some more people who can coddle the fading star and flatter her unflappable ego. 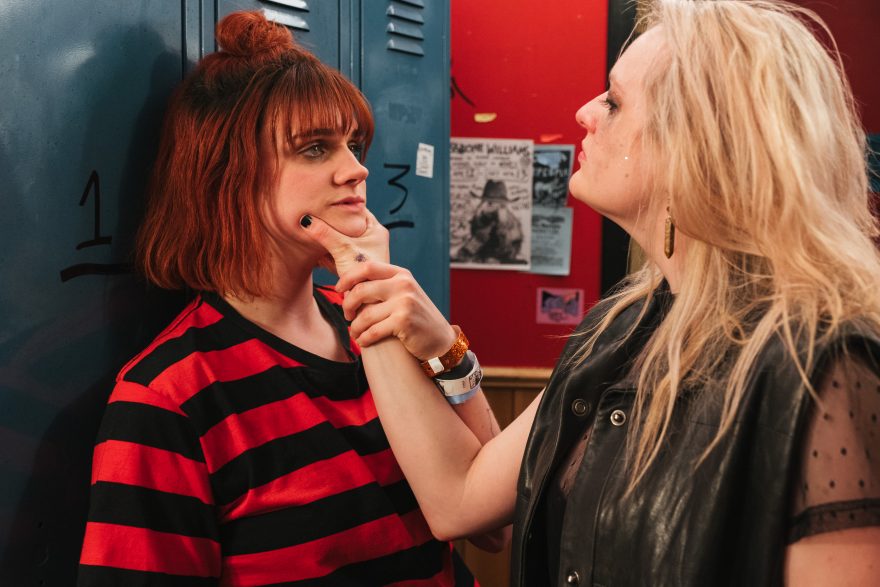 This sequence transitions into another backstage drama where all of members of Becky’s inner circle fret and worry about the singer potentially blowing her last shot at credibility. This time joined by Becky’s mother (Virginia Madsen) and The Akergirls (who by this point are regretting an alliance with their musical idol), the middle section of Her Smell plays out like watching people slowly going down with a sinking ship; too exhausted to care anymore that Becky is bringing them down with her or that the captain of this capsizing vessel will eventually show up to start barking orders and demeaning everyone in sight.

I know several people whose opinions I respect who weren’t able to make it this far into Her Smell; choosing to walk out of the film because they couldn’t handle the abrasive nature of Perry and Moss’ work together. I can’t totally begrudge them for that. Her Smell is a lot to take in, and Becky’s behaviour and abuse of those around her is the definition of triggering. While comparison to the likes of Courtney Love are probably inescapable and inevitable, Her Smell and Moss’ complex, bracing, and daring performance has more in common with films along the lines of Sunset Boulevard and Mommie Dearest.

There are brief glimpses of the person Becky Something used to be, and that she wasn’t always such a toxic person inside and out, but it takes a while to realize that not all of the singer’s issues are her fault. Becky Something has made some regrettable life choices, but she’s also a monster created by the star-making machine. A victim of her own success who stopped listening to friends and those closest to her a long time ago, Becky only thinks she’s self sufficient; blind to the fact that it takes a lot of substances and an entire team of put-upon compatriots to keep her going. It’s up to Perry, Moss, and the rest of the cast (all of whom are exceptional, particularly Rankin and Stevens) to make the viewer know in no uncertain terms that things are only getting worse without compromising the film’s fly-on-the-wall perspective.

But anyone who can make it through the worst of times with Becky will be handsomely rewarded in the latter stages of Her Smell, which rises up from a liquor, sweat, vomit, and blood soaked hell to become one of the most painfully realistic and uniquely suspenseful portraits of recovery and redemption ever put to film. The last two segments of Her Smell show a newly sober Becky trying to rebuild bridges with friends and family – many of whom are still understandably angry and skeptical about her long term recovery – and the pitfalls of trying to stay clean in an industry where indulgence is an adjunct part of the job. For all that Becky has done to those around her and all that Perry and Moss have put the viewer through, it’s hard not to root for the character to find a place of peace and comfort. Better still, Her Smell isn’t a trite, easily digestible film about recovery and a former asshole learning how to redeem herself in the eyes of others, but a poignant and eventually disarming look at how friends and colleagues can mobilize to help someone in need, even when said person has done everything possible to push them all away in disgust.

While the rock and roll setting of Her Smell is naturally flashy, Perry’s direction and visuals never distract from the story’s stripped down and character based approach. While this is handily Perry’s most visually ambitious project to date, outside of expertly employed close-ups, juxtapositions, and reflections, the writer-director knows that he simply has to turn the camera on Moss and those around her to get what he needs. Her Smell is the work of a writer who knows the strength of his material, and a director with the utmost trust in his capable cast. It’s a chaotic tale to tell, but Her Smell displays some of the most accomplished, assured, and balanced filmmaking and storytelling of the decade.

Whether a viewer loves or hates Her Smell, two things are certain: they will never forget how it made them feel and Moss’ performance will be permanently imprinted upon their psyche. It’s almost impossible to make a film that’s both raw and polished at the same time, but that’s precisely what Perry has accomplished. Her Smell is a brilliant mixture of rigorous observation and huge emotional swings that earns every small bit of emotional catharsis that the main character is trying mightily to build towards. Just as Becky practically dares those around her to walk away, the film itself constantly points towards the exits, giving viewers an opportunity to get off a ride that’s going increasingly off the rails at any time. Those willing to stick around, however, will be richly rewarded for their efforts. It’s one of the finest films of the year so far.

Her Smell opens exclusively in Toronto at TIFF Bell Lightbox on Friday, April 12, 2019. Elisabeth Moss will be on hand for a post-screening Q&A following the 2:25pm performance of Her Smell on Sunday, April 14. The film expands to Cinema Moderne in Montreal, Apollo Cinema in Kitchener, and Rio Cinema in Vancouver on April 26, to The Screening Room in Kitchener, Globe Cinema in Calgary, and Mayfair Theatre in Ottawa on May 3, and to Metro Cinema in Edmonton on May 17.

Check out the trailer for Her Smell: