Could it be that penguins are the most well liked living creatures on Earth? You never hear anyone saying that their property has been overrun by swarms of ornery penguins. You never get news reports of a gaggle of penguins clogging up highways. Penguins never show up in local parks to annoy anyone or potentially terrify children. It’s highly unlikely that someone is sitting at a bar somewhere in the world and droning on endlessly about how much they hate penguins. I could see someone disliking Chilly Willy and his cutesy earworm theme song, but that’s hardly grounds for dismissing an entire species. Try googling “penguin” and “controversy” in the same sentence, and searching for anything that doesn’t involved the Pittsburgh hockey team or the venerable publishing house. You’ll be there for a very long time.

Granted, a big part of our love affair and fascination with penguins probably stems from the fact that we don’t have to deal with them on a daily basis because they live in harsh, unforgiving climates where only scientists and the hardiest of souls would fear to tread. They’re relatively cute, often endearingly awkward flippered bipeds that humans rarely interact with, making them the animal kingdom’s most reliable novelty act.

Enter Disneynature’s Penguins, which isn’t the first documentary to give those living in warmer climates a glimpse into the daily lives of these creatures, and it assuredly won’t be the last. This latest entry in Disney’s ongoing Earth Day tradition of releasing well made, educational, and easily accessible nature documentaries (where a portion of all opening week proceeds will go towards conservation charities, with the Wildlife Conservation Network benefitting here), is a sure fire crowd pleaser for adults and children of all ages.

Directed by Alastair Fothergill (who worked on several previous Disneynature productions, including Chimpanzee and Bears) and Jeff Wilson (who recently directed the stunning “Forests” episode of Netflix’s Our Planet series) and narrated with a great amount of warmth and humour by Ed Helms, Penguins looks among a group of animals in a specific ecosystem to find a star worth following and building a narrative around. Disneynature’s Penguins settles upon Steve, a practically googly-eyed looking Adélie, as he makes his pilgrimage from open waters and back to Antarctica to prepare for the spring mating season. Now five years old and considered an adult by penguin standards, Steve has to set about finding a life partner and raising a family. Disneynature’s Penguins observes Steve in his natural habitat as he attempts to build a nest, impress a mate, fend off natural predators like birds, whales, and seals, and ultimately raise two chicks of his own alongside his life partner, Adeline. 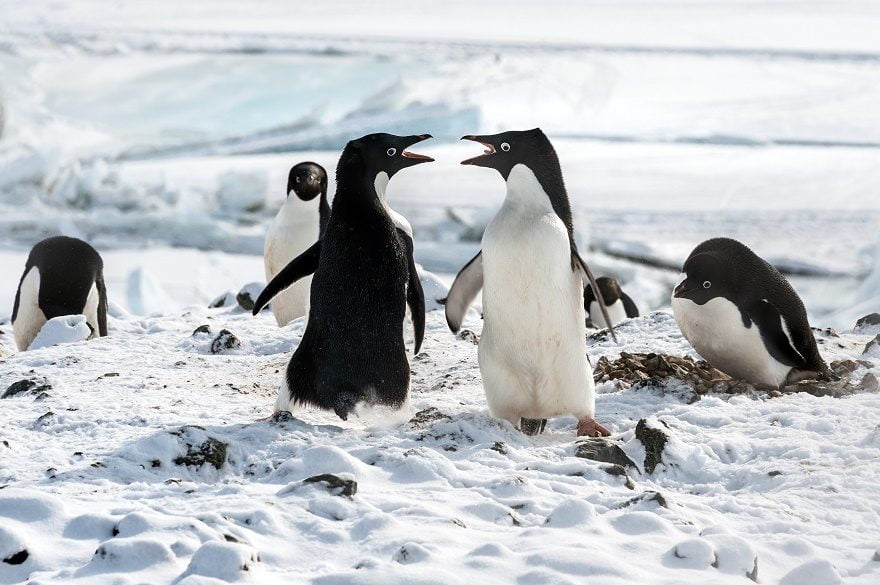 I’m sure there are no small amount of documentary purists out there who would balk at Disneynature’s Penguins (and other films in their ecologically minded franchise) for taking real life situations, setting them to amplified sound effects and pop songs (including uses of REO Speedwagon and Whitesnake that I’m not ashamed to admit that I enjoyed), and spinning precious, fictionalized internal monologues for these animals. Even naming a penguin Steve could cause some to turn their noses upward, but it’s a good name. Steve sounds like the name of someone who’ll watch your pets when you go on vacation, or a friend that you could loan your car to without worry. Steve sounds like a good guy and an even better penguin.

Such a narrow reading overlooks that Disneynature’s Penguins holds unquestionably more educational material than most family films, and neglects to realize that most lessons about life and the world around us have been handed down subconsciously through the simplest of stories. To pick on Disneynature’s Penguins for not having a better story than that of a standard rom-com for half of its running time is a lot like picking on Sesame Street for not teaching youngsters about the ins and outs of emerging international economies whenever The Count is on screen. Disneynature’s Penguins focuses on teaching young people the basics about these animals, while revelling in their overall cuteness and quirkiness. And while Disneynature’s Penguins does hint at death and the other nasty bits of being alive (although curiously little about climate change), the film remains a celebration of life and the resilience of these animals. There’s something uniquely inspiring about the lives of penguins and their ability to thrive in one of the world’s most dangerous places.

Much like the previous Disneynature efforts, Penguins impresses with its scope and access, the rigors of which are once again documented over the film’s closing credits for anyone who sticks around and is interested. With so many penguins and other animals converging in one place for mating season, Fothergill and Wilson have to keep their crew and equipment usage to a minimum, meaning almost all of the film’s best shots have a certain degree of luck and perseverance when it comes to capturing them. Although Steve, Adeline, and their offspring are the focal points of Disneynature’s Penguins, it’s no small feat that Fothergill and Wilson were able to constantly keep track of their stars amid a sea of thousands of other identical looking animals packed tightly into the same area. Even more remarkable is the human filmmakers’ abilities to remain as unobtrusive as possible to their animal hosts. It’s some of the best footage of these animals ever captured.

Kids will learn plenty about penguins, adults won’t have to answer too many pressing or awkward questions about the circle of life, and everyone will be left with a smile on their face by the time it all wraps up. Disneynature’s Penguins doesn’t offer much of anything new about these animals that hasn’t been said before, but what it lacks in revelations it more than makes up for with cuteness, solid storytelling sensibilities, and gorgeous images. Of all the previous Disneynature entries, Penguins is the one that feels the most like an old school live action or animated Walt Disney production. The kids at the preview screening I attended were certainly captivated and entertained. Happily, I was, too.

Check out the trailer for Disneynature’s Penguins: