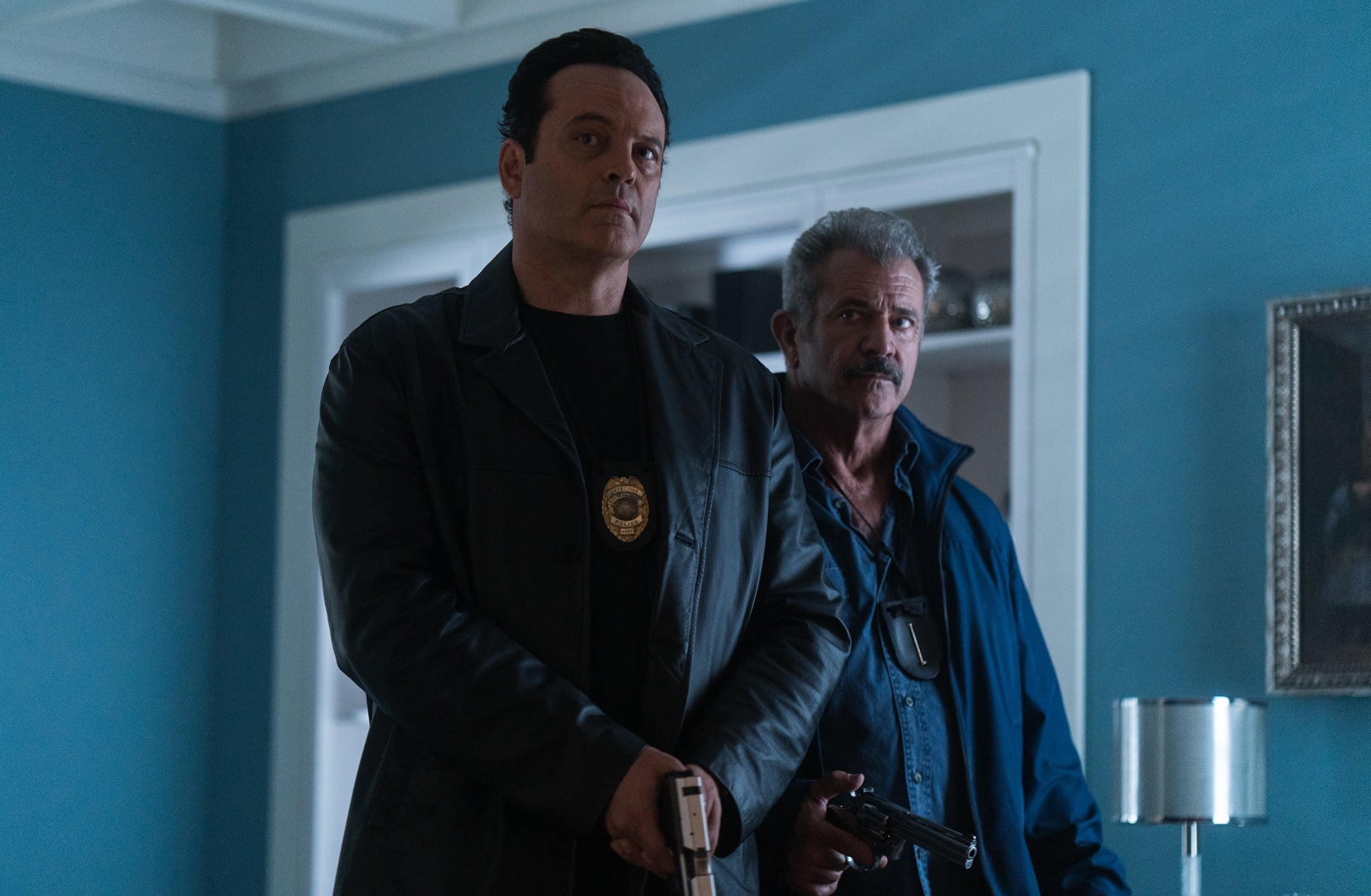 Dragged Across Concrete, the latest slow-burn from still emerging American genre filmmaker S. Craig Zahler, is well in line with the writer-director-composer’s previous efforts, and it assuredly won’t sway any of his detractors or confound any of his many supporters. It’s another nearly three hour film from Zahler (Bone Tomahawk, Brawl in Cell Block 99) that spends three-quarters of its running time chatting and meandering before offering up a little bit of the old ultraviolence for some payoff. Dragged Across Concrete might the best and purest distillation of Zahler’s hyper-specific, right-wing-leaning talents, but only three films into his career it also shows the marks of a filmmaker who’s starting to stagnate just as his canvases should be getting more ambitious and elaborate.

Dragged Across Concrete is a heist movie built more or less around two primary story threads that will eventually intersect. In the one that opens the film, Henry (Tory Kittles), a recently released ex-con, returns home to find his mother (Vanessa Bell Calloway) resorting to prostitution to pay the bills. As a former convict, Henry has few legal job opportunities at his disposal, and he’s looking at dipping his toe back into criminal enterprises to help build a better future for his wheelchair bound younger brother (Myles Truitt).

In another part of the city, veteran police detectives Brett Ridgeman (Mel Gibson) and Anthony Lurasetti (Vince Vaughn) have just been suspended without pay after being captured on camera using unnecessary force on a suspect in a sting operation. The suspension couldn’t come at a worse time for either of them. Anthony plans on proposing to his longtime girlfriend, but it’s Brett who has bigger problems. In addition to having a wife (Laurie Holden) who’s battling M.S., Brett’s daughter (Jordyn Ashley Olson) is constantly being bullied, targeted, and assaulted in their increasingly unsafe neighbourhood, leading the family to a breaking point. Now distanced from a job that he felt unappreciated at and gave him a meagre paycheck and no opportunities for advancement, Brett concocts a scheme to rob a new, high profile criminal in town (Thomas Kretschmann) who he suspects to be a high level drug dealer.

Set in the fictional city of Bulwark (a name that has plenty of political and literary connotations), Dragged Across Concrete once again finds Zahler following a bunch of borderline scumbags – some vastly worse than others – to their sometimes unpredictable, but frequently inevitable fates. It’s not in any sort of hurry to get there, though, and Zahler isn’t afraid to ruffle every possible feather along the way. After the similarly paced escapades in his western Bone Tomahawk (which is pretty good) and his prison revenge flick Block in Cell Block 99 (which isn’t just overrated, but patently dreadful), it’s clear now what filmmaker Zahler most wants to emulate from this point onward. Many might think that his B-picture inspired films of exceptionally articulate alpha-males who speak like classic literature majors is inspired by legendary motormouth Quentin Tarantino, but politically and narratively Dragged Across Concrete is unequivocally indebted to the work of late cinematic whipping boy Michael Cimino. Dragged Across Concrete is essentially a blatantly offensive, old school potboiler in the vein of Year of the Dragon told at the pace of Heaven’s Gate.

I mean that last bit as a compliment. Politics aside (and I’ll get to that momentarily), Zahler is one hell of a storyteller, who in two of his films (Brawl in Cell Block 99 not being one of them) has managed to make two and a half hours of set-up feel like a hypnotically short period of time. While Zahler isn’t afraid of lengthy silences (including a scene with Vaughn eating a sandwich that’s almost comically like the pie slicing scene in Heaven’s Gate), most of the filmmaker’s dalliances come in the form of unbroken, character enriching conversations. Outside of occasional, grating running references and nods to reassert how intelligent of a person he must be (which is something else he gets from Cimino wholesale), Zahler’s lengthy dialogues play out like mini-movies unto themselves, with viewers constantly shifting their beliefs and allegiances to characters across a handful of sentences rather than using shock tactics and set pieces. The dialogue itself might be purposefully stylized and over the top, but the character interactions feel true to the beats of everyday life. It’s a tough trick to pull off, but Dragged Across Concrete is a masterclass in nailing such a curiously entrancing tone. Brett and Anthony’s uneventful stakeouts of their targets and a pair of getaway drivers making their way to a safehouse in the country are scenes that unfold over long periods of time that most filmmakers would shy away from, but Zahler instead embraces their dramatic potential. In Dragged Across Concrete, the handful of action beats and gory shocks are decidedly secondary to what’s going on in the minds of the characters. 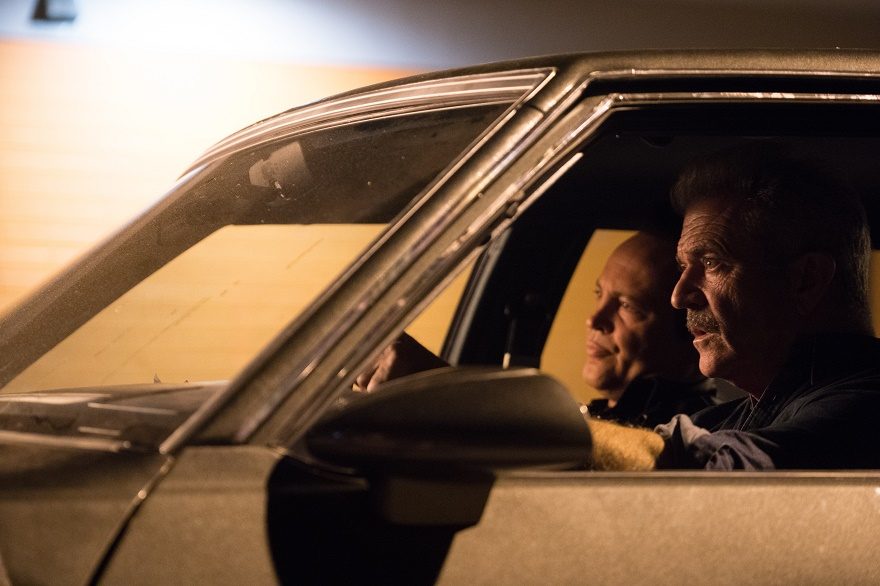 Zahler’s also a gifted, if admittedly unsubtle visualist. While most of his shot choices are locked off in one place and his knack for colour coding characters and settings to foreshadow and draw attention to subtext are awkward, he certainly knows how to fill the frame and make things interesting. Even if a scene is as simple as two people sitting down together for an extended period of time, Zahler makes sure that there’s a visual investment for the viewer to make the experience a lot less passive and colder than Dragged Across Concrete might appear at a passing glance. There’s always something to look at in a Zahler film, which is great because you won’t be going anywhere anytime soon.

The problem (or perhaps the benefit, depending on how you want to look at it) is that such slow pacing will force viewers to spend time with the uneasy and wishy-washy political sentiments expressed throughout Dragged Across Concrete. The overall point to Dragged Across Concrete is to depict a world of people who desperately want to work and support their families, but for a variety of social and political reasons, they can’t; crooked cops, former prisoners, a bank teller (Jennifer Carpenter) whose maternity leave is coming to an uneasy end. It’s a film, like Zahler’s others, about people being forced into doing things they don’t want to do because of moral or societal demands to do so.

Heist and action filmmakers like Walter Hill, William Friedkin, and Michael Mann have been able to make films similar to Zahler’s by focusing on the emotional and economical underpinnings of these characters. Dragged Across Concrete, on the other hand, desperately wants to make this political and racial, two things that are both admittedly timely and wholly unnecessary for the film’s success. Setting aside the obvious dodginess that arises from casting the likes of Mel Gibson in something so openly provocative, Dragged Across Concrete is a crime movie parable beholden to the current “there were injustices committed on all sides” school of thought that in its most unfortunate moments plays out like the Libertarian equivalent of Paul Haggis’ Crash. It’s a sometimes staggeringly arrogant movie that neglects major underlying issues in favour of hyperbole. Dragged Across Concrete doesn’t lack character depth or storytelling chops. What it lacks is nuance and a broader point of view. If Henry, who’s black and impoverished, didn’t live in such a shithole, he wouldn’t have to go back to a life of crime. If we all weren’t such pussies and we respected the authority of cops, Brett and Anthony wouldn’t be forced into going rogue. That’s not a lot to hang three hours on, and every time anyone says anything racially motivated, it’s like watching a drum tech constantly banging away and never getting the sound right. It only grows sadder and more desperate as it goes on, and not in a dramatically satisfying way, except for the conclusion which is smarter than the rest of the material suggests it’s going to be, but it’s so jarringly off message for Zahler that it feels as if it’s being played on a completely different instrument.

In no insignificant way, Dragged Across Concrete does benefit from casting Gibson as a more than mildly racist asshole, and I’ll charitably and not incorrectly say that it’s because the actor has an underutilized knack for playing jerks. Vaughn, surprisingly, finds a lot of likable facets to his character, offering a nice counterpoint to his partner’s oppressively gloomy disposition, delivering his best performance in years in the process. The real star here, however, is Kittles, a great character actor given a role that should hopefully catapult him into more leading man roles. He isn’t given as much screen time as his big name co-stars, but as the heart and soul of Zahler’s story, Kittles provides a much needed moral anchor.

Dragged Across Concrete is now available in Canada on VOD, Blu-Ray, and DVD.

Check out the trailer for Dragged Across Concrete: