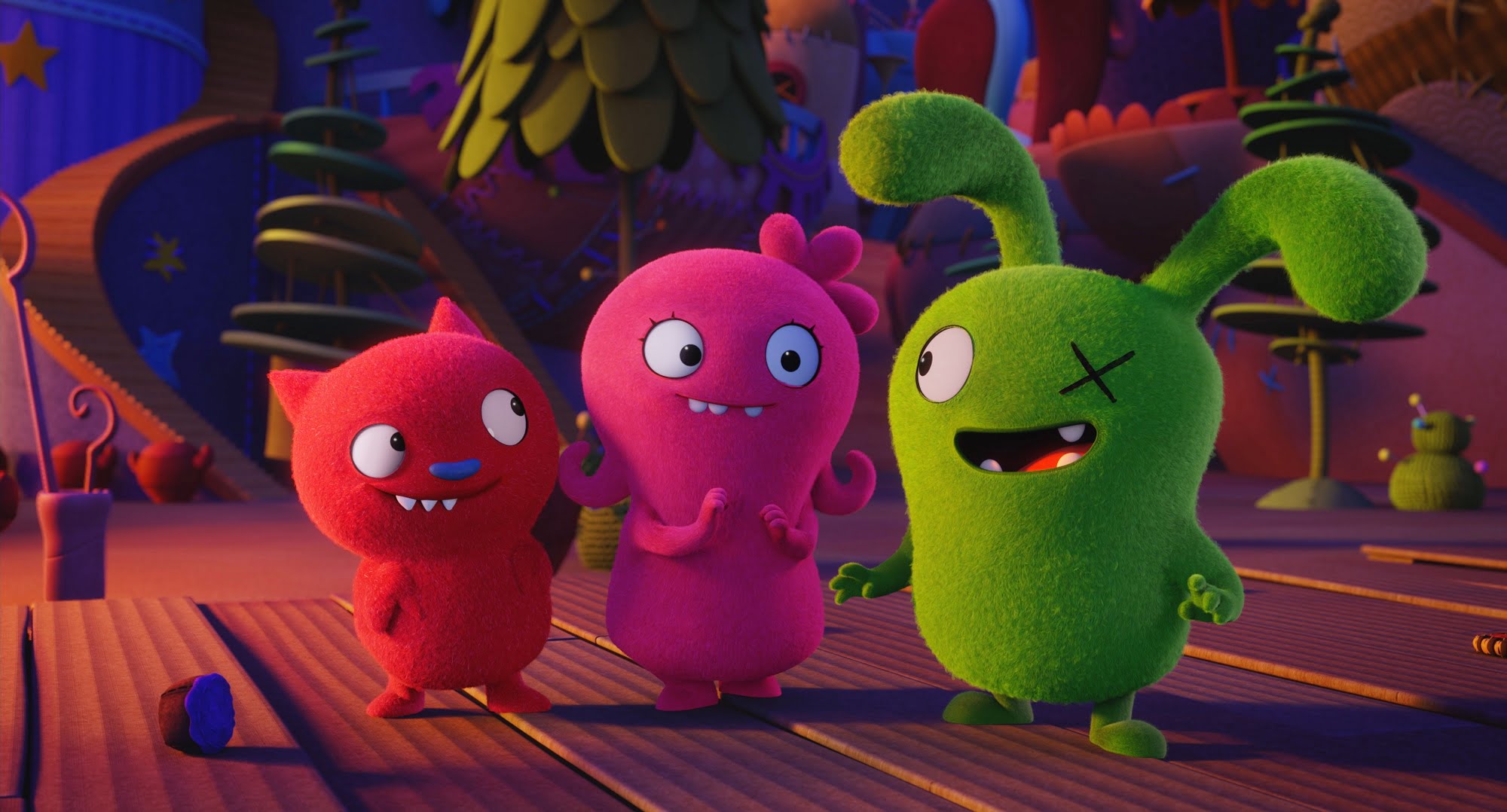 UglyDolls is an animated adventure based on a toy line that’s waning in popularity, with a nice message about accepting one’s own imperfections that’s aimed squarely at kids who still see their childhood playthings as their best friends. That’s really about as deep as I want to get when it comes to UglyDolls. I suppose I could just leave it at that, since the only concession that UglyDolls offers to adults is that it’s short and its lengthy list of original songs isn’t as annoying as it could’ve been. But I’m here now, the movie isn’t bad, and I said I would do this, so here we go…

Uglyville is a home for misshapen, misfit toys that were deemed by some bizarro higher power to be unworthy of going on to “The Big World,” where they’ll be played with by adoring kids. They’re a relatively chipper bunch, happy with the friends they’ve made, the community they’ve fostered, and the lack of judgment surrounding their looks. Moxy (voiced by Kelly Clarkson), however, is an eternal optimist that wakes up every morning believing that today will be the day she’s chosen by a child. When that day never comes, Moxy goes up a magical pipe in the sky – aided by her closest friends: the kindhearted doofus Babo (Gabriel Iglesias), chronic worrywort Wage (Wanda Sykes), the sage and wise Lucky Bat (Leehom Wang), and a dog voiced by Pitbull – to a strange new world. They don’t end up in the human realm, but rather The Institute of Perfection, which is basically a finishing school for human looking dolls, populated by arrogant mean girl types and lorded over by head honcho, Lou (Nick Jonas). It’s clear that the blobby looking UglyDolls aren’t up to snuff, but Moxy persists with going through with “The Gauntlet” (seriously, I feel like I’m just typing random words right now): a ultimate test of a doll’s ability to cut it in the human world. Lou tells Moxy and her friends that they can train in the institute, but he’s clearly up to no good.

UglyDolls has had a long, strange journey to the big screen. The toys themselves were popular a decade ago, but are only now coming back into conversation thanks to the movie. Illumination, the studio behind the Despicable Me franchise, was originally supposed to do something with the property, but nothing ever came to fruition. A new company stepped in a few years ago, and directorial duties fell to reliable animator Kelly Asbury (Shrek 2, Smurfs: The Lost Village). The story for the UglyDolls movie was originally penned by Spy Kids, Sin City, and Alita: Battle Angel mastermind Robert Rodriguez, who eventually had to leave the project behind, but still remains onboard here as a producer. Why am I telling you any of this? I don’t know. I’m just making conversation and killing time. Writing about kids movies for adults is hard. 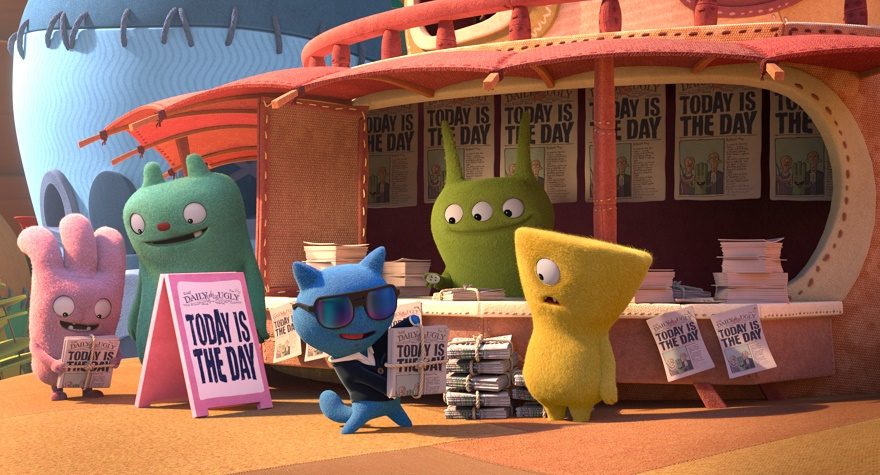 With the talent that went into designing it and a budget that was far less that I’m expecting anyone intended it to be, UglyDolls has a nice, but inconsistent visual style. The uglies have suitably cute and fuzzy features akin to their toy store counter parts. (In the interest of full disclosure: I have a Babo doll sitting on my desk from years ago.) The world they inhabit is also creatively realized, with hand-stitching on the sides of houses and everyday items, cardboard tables, a broken button for a moon, and clouds made from stuffing. It looks delightfully like a place that has been constructed by hand from scraps. That’s nice, but most of UglyDolls takes place in the drab Institute of Perfection, which is supposed to look bland, but probably not as cheap and halfway finished as it ultimately does. Sometimes characters also appear in front of simple, relatively blank backgrounds for no apparent reason, which is the same effect television animators used back in the day to save money. There’s also a giant metal baby that probably won’t frighten kids, but will haunt my nightmares for years. An entire movie in Uglyville might’ve been a bit more delightful, but I guess we have to take what we can get.

UglyDolls is also a film that believes that framing itself as a wall-to-wall musical is the best way to recoup its costs. It’s not entirely wrong, and while none of the tunes being trotted out are unlistenable or something that would make adults watching UglyDolls for the three-thousandth time want to stab themselves in the ear with a screwdriver, they range from forgettable at worst to pretty decent at best. Nothing here would ever be considered a hit or Oscar worthy. Clarkson’s chipper opening number is pretty good (minus Pitbull’s meaningless contributions, which are many throughout the film and always unwelcome and annoying), and a duet between Clarkson and Janelle Monáe, who voices a helpful and sympathetic “perfect doll” that’s harbouring a secret, starts off whimsical and turns suddenly and effectively melancholic and sad.

This proliferation of musical stars causes a problem, however, once one realizes that the entire voice cast, save for the likes of Iglesias and Sykes, have been hired because they can sing, not because they can act. Clarkson and Monáe are pretty good, and Jonas has a few fun moments as the villain (and unfortunately also the worst song by an extremely wide margin), but Pitbull and Blake Shelton, who plays Ox, the one eyed mayor of Uglyville, sound like people who just walked in off the street, and they have no clue where they are or what they’re doing. The performances in UglyDolls are just as inconsistent as the visuals.

None of this is worth getting angry over. I’m not going to beat up on a movie that wants to teach kids to love themselves, flaws and all, especially when it never does anything malicious, misguided, or, ugly. It’s a film made to sell a product, but who knows if this can revive a property that hasn’t been all that mainstream for quite some time now. UglyDolls is still better than a majority of the things adults throw on their televisions and tablets to babysit their rowdy kids for an hour and a half. That’s all that I got for UglyDolls. Thank for coming to my TED Talk.

UglyDolls opens in theatres everywhere on Friday, May 3, 2019.

Check out the trailer for UglyDolls: