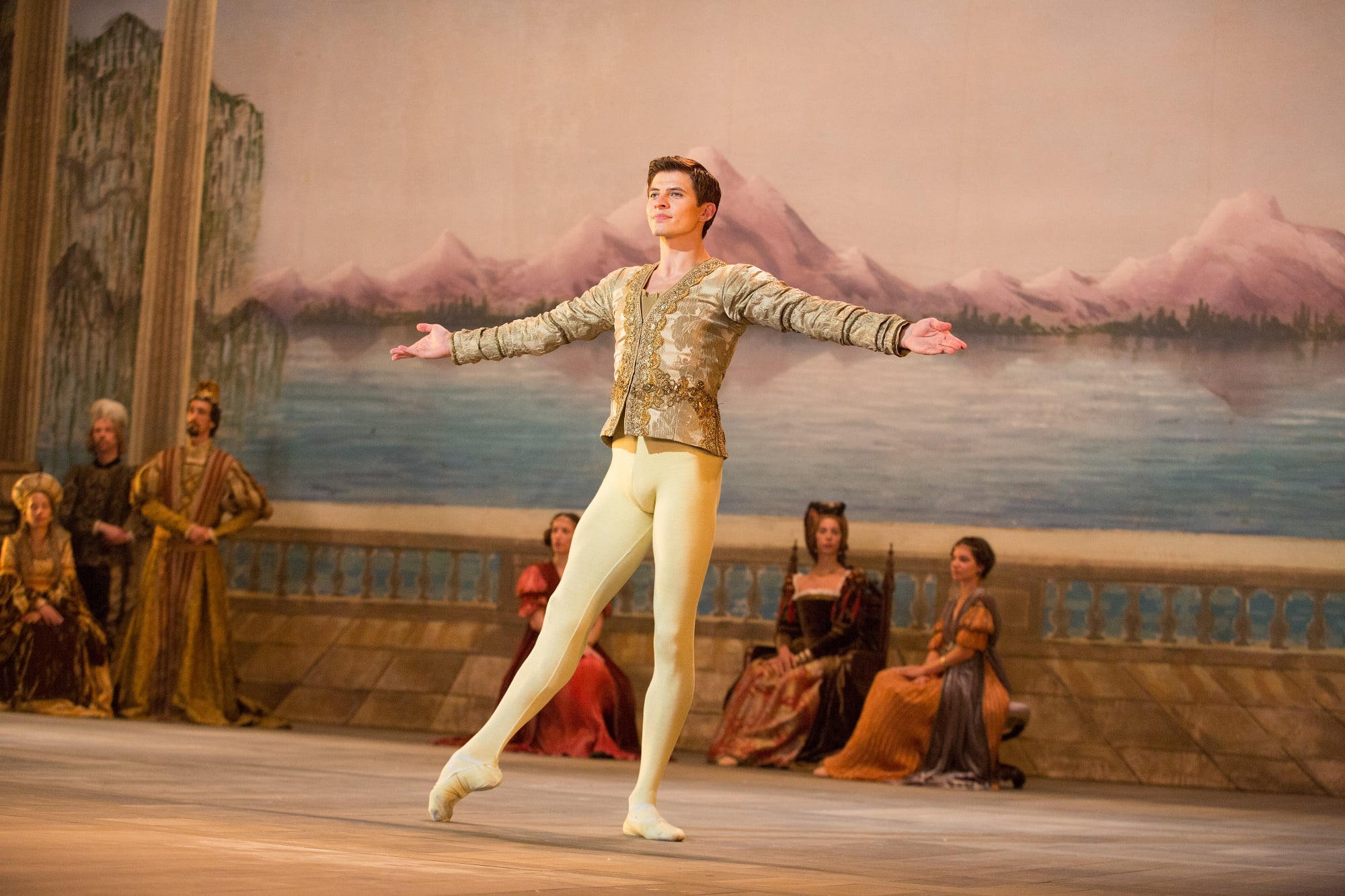 The White Crow, the third feature film from actor and director Ralph Fiennes, is a standard, unexceptional, but well produced biopic about a ballet legend that benefits greatly from a novice actor giving an outstanding leading performance and a keen eye for fine details. As a look at three specific points in the life of influential Russian ballerina Rudolph Nureyev, The White Crow makes sure to hit a lot of the important biographical signposts, while curiously and uncomfortably breezing past others, making for a comptent, albeit bland experience that fully comes to life whenever one is able to marvel at the central turn from Ukrainian dancer turned actor Oleg Ivenko.

The White Crow boasts a time shifting narrative that’s largely woven about a formative and career changing trip that Nureyev (Ivenko) takes to Paris for five weeks in 1961, but also shows glimpses into his childhood (filmed in black and white, with minimal dialogue) and his demanding to be trained by Alexander Pushkin (Fiennes) at Leningrad’s best ballet academy. It’s the story of a young man who came from nothing and grew into one of the most celebrated and mercurial dancers of his generation. In Paris, the immodest and confident Nureyev openly and perhaps for the first time expresses his displeasure at being held by by the Soviet Union’s artistic and political restrictions. He thinks that experiencing life in all its glory is the only way to become the world’s best dancer, and that leaving his Communist country behind is the only way to move forward. He’s desperate to make an impact on a larger global stage, but he’s constantly under surveillance by handlers and government officials.

Fiennes and screenwriter David Hare (The Hours, Denial, The Reader) refuse to back down from depicting Nureyev’s obstinacy and arrogance in a realistic light that contrasts intriguingly with the dancer’s emotional and professional plight. Nureyev never thinks about anything other than pleasing himself and forwarding his own career, even at his most charming, and yet, his frustrations and paranoia are understandable. The White Crow (the title of which is a metaphor for anyone who refuses to conform to established norms) is a film about a not particularly likable and selfish person that’s still somehow relatable. Even if this character wasn’t someone as prominent as Rudolf Nureyev, the frustrations being expressed would be understandable and sympathetic. The White Crow makes one question if Nureyev’s bluster is something that was always a part of his DNA as an artist, or if it was the USSR’s increasing restrictions that informed his character. 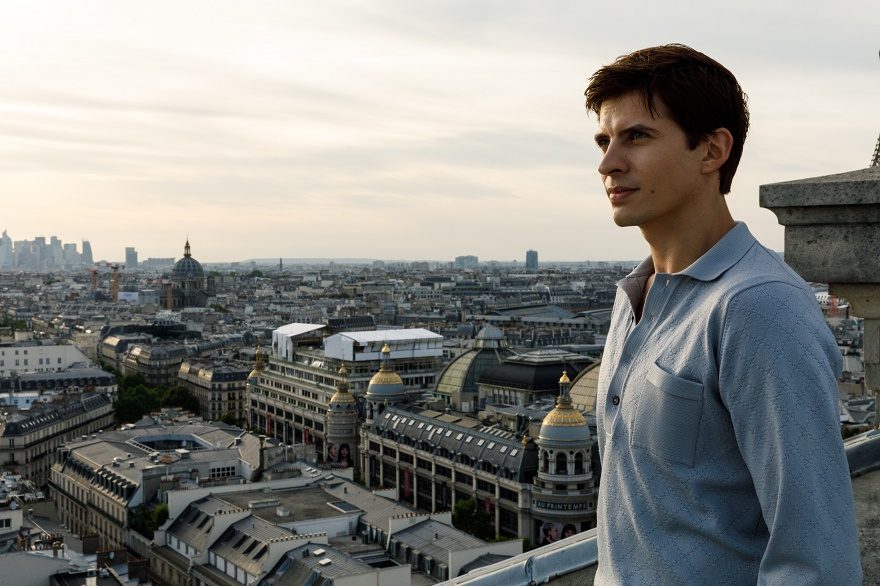 Unless they knew so going in, one would never suspect that Ivenko had never performed on screen before The White Crow. While he acclimates himself fluidly and resoundingly to the recreations of Nureyev’s signature style of dancing, the dramatic beats of Ivenko’s performance will leave just as large of an impression. Ivenko’s Nureyev – who speaks in broken languages (English, French, Russian) like a man without a country – looks intensely for worth in the world around him. He’s always quietly sizing up friends, rivals, teachers, and handlers, looking for an edge or way to exploit their weaknesses to his gain. It sounds nefarious in practice, but there’s a softer side to this depiction of Nureyev that shines through, particularly in the film’s final act and showpiece when the dancer daringly attempts to defect. He’s witty, caustic to a fault, and keenly observant. Fiennes gives the young actor plenty of authentic looking period details and seminal moments to work with, but Ivenko’s performance is punching well above his C.V. as an actor. It’s one of the best debut performances in recent memory, and handily the best thing The White Crow has going for it.

Fiennes’ attentiveness to recreating a specific time and place in Nureyev’s life is quite remarkable, and almost enough to make viewers forget that the production design, handheld cinematography, and time shifting construction are masking a script that’s just a bunch of jumbled up, unnecessarily convoluted bullet points that wouldn’t be half as interesting without a certain degree of artistic panache. Taking nearly half the film to fully outline Nureyev’s complex personality and career, The White Crow has little room for anything organic or spontaneous. For a film about a Russian dancer known for his bristling personality and passionate performances, it’s all very British in a negative way; buttoned up, proper, and stoic as possible, despite its impish main protagonist. It’s a film about a passionate young man (and one that reduces his bisexuality to a couple of bland, chaste scenes of characters in various states of undress) where every driving impetus has been scrubbed clean and had the edges rounded off. Until it comes time for the finale, The White Crow is a film about artistic frustration that’s too fussy with the specifics to be bothered with a sense of personality.

The White Crow also lays bare Fiennes’ limitations as a filmmaker. He can only focus on a single character at a time, leading to a film packed with fine supporting actors (including himself) who have almost nothing to do. The pacing is languid, and Fiennes falsely compensates his film’s lack of drive with a nearly deafening, string heavy musical score and an overstuffed sound mix that would be more at home in a war picture than a movie about a struggling dancer. Perhaps after sitting on this material for a decade before making it, Fiennes has overthought every inch of The White Crow, leading to a final product where there’s a noticeable push and pull between the artificial and the authentic. The White Crow all too eagerly wants to tell its version of Nureyev’s story, but Fiennes gets bogged down in all too conventional filmmaking traps that make it virtually unrecognizable from other middlebrow biopics pitched at the same level.

The White Crow bounces back and forth between greatness and mediocrity for most of its running time, nudging out a slight recommendation based solely on the strengths of the film’s climax and Ivenko’s consistent performance. The White Crow isn’t much of a film, but at least it builds towards some sort of intense and cathartic payoff. Again, it distracts from the fact that it’s a pretty limp biopic on the whole, but those elements are enough to make sitting through The White Crow worthwhile.

The White Crow opens on Friday, May 10, 2019 at Cineplex Cinemas Varsity in Toronto and Fifth Avenue Cinemas in Vancouver. It expands to Montreal on May 17th and additional Canadian cities throughout the spring and summer.

Check out the trailer for The White Crow: